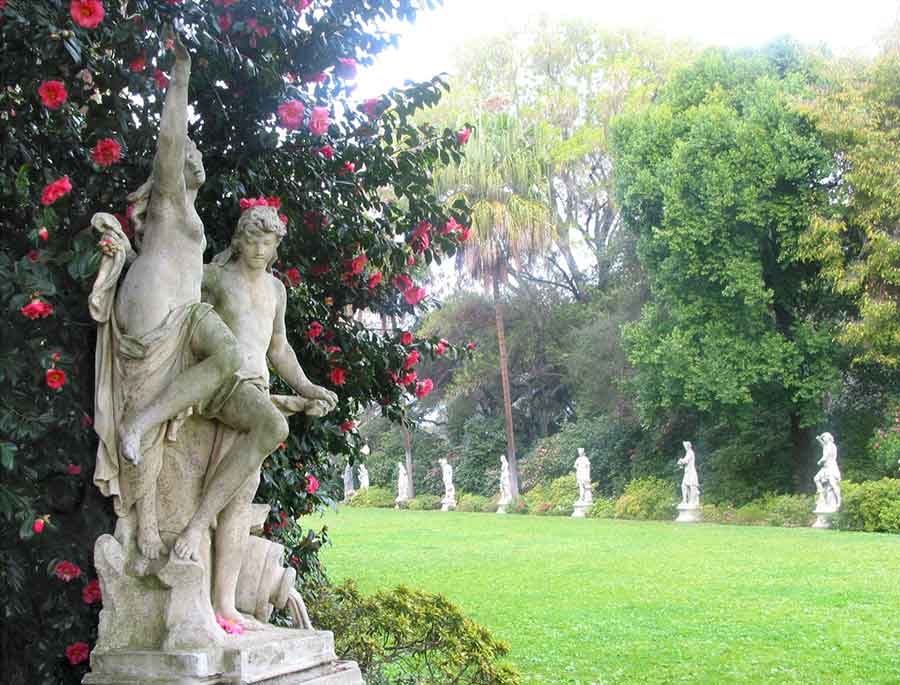 Lorenzo Mattielli, Alpheus and Arethusa, 1719–24, and the Italian statuary in the North Vista. The Huntington Library, Art Museum, and Botanical Gardens. Photo by Lisa Blackburn.

The Huntington recently released a new, comprehensive audio tour about its outdoor sculpture collection, which includes examples from the 16th to the 21st century. Featured among these works are the 17th- and 18th-century Italian sculptures in the North Vista. When Henry and Arabella Huntington designed the North Vista, they collaborated with William Hertrich, the first superintendent of The Huntington’s gardens. Their intention was to recreate, in Southern California, the beauty and harmony of Italian Renaissance gardens in Florence, Rome, and Northern Italy filled with sculptures and fountains conceived for the pleasure of their owners and guests.

Sabina Zonno, a Kress Interpretive Fellow at The Huntington and a postdoctoral scholar of Medieval and Renaissance European art, happens to be from Padua, Italy, the same city from which most of the sculptures in The Huntington’s North Vista come. From the moment she stepped foot in the garden, she felt right at home. We have asked her to share what she has learned through her research about the garden and its statues that has informed The Huntington’s audio tour.

When you walk by the Huntingtons’ home—now the Huntington Art Gallery, where their art collection is exhibited—the view of the North Vista garden opens out before you. A broad avenue of bright green lawn, roughly equal in size to two football fields, is decorated by garden sculptures from Henry and Arabella's collection. At the far end of the garden rises a sumptuous late Baroque Italian fountain against the dramatic backdrop of the San Gabriel Mountains. This is what the Huntingtons would see when they descended the grand staircase in their mansion and looked out their windows more than 100 years ago. 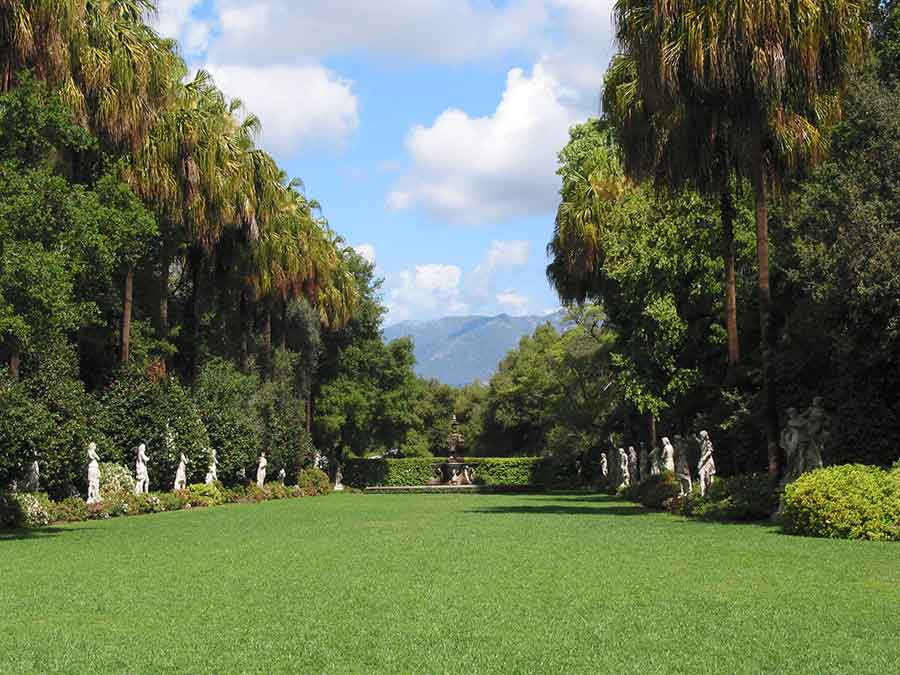 In 1911, the Huntingtons’ villa was completed and the first set of palm trees were planted along the sides of the North Vista.Three years later, in 1914, Henry and Arabella started collecting Italian statues for their Italian garden. Their first acquisitions, purchased one year after their wedding in Paris, were two splendid sculptural groups portraying Greek legends: Orpheus and Eurydice (14.51) on the right side of the North Vista lawn, as you look toward the fountain, and Alpheus and Arethusa (14.52) on the opposite side. Both these statues were made by one of the most talented Italian sculptors of the late Baroque period, Lorenzo Mattielli (1687–1748), an artist born in Vicenza, a city in Veneto, a region in northeastern Italy. Mattielli worked primarily in Vienna as court sculptor for the emperor Charles VI (1711–1740) and later in Dresden, Germany, for Frederick August II (1733–1763). It is very likely that the two Huntington sculptural groups were produced in Vienna, probably in 1719–24, for the gardens of Emperor Charles VI.

What about the other 19 Italian sculptures on the North Vista? They were produced in Veneto, a region in northeastern Italy, by an Italian sculptor recently recognized by the art historian Monica De Vincenti as Agostino Testa (1662–1735). Testa was a prolific artist from Vicenza who worked closely with the celebrated Marinali family of sculptors, who were active in the same area in the late 17th and early 18th century. 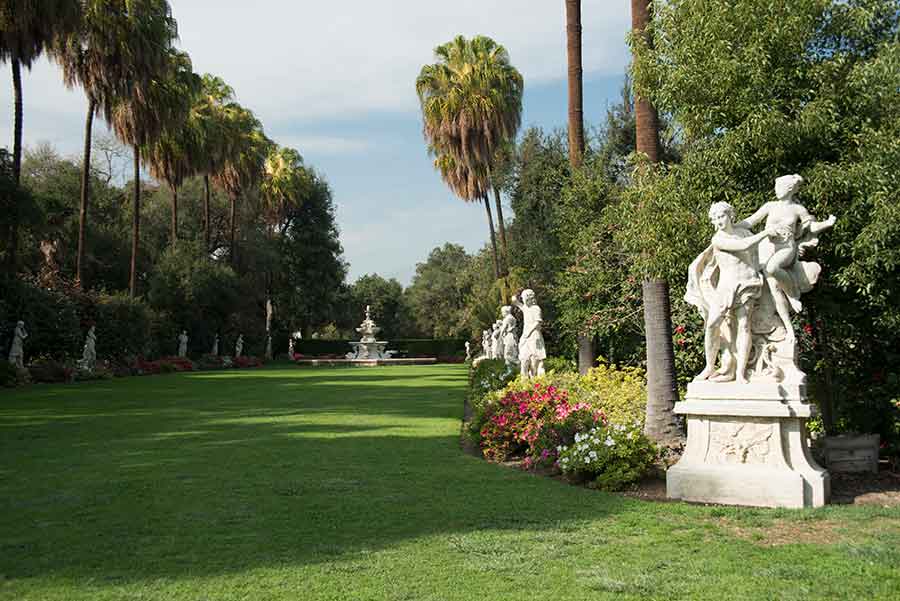 Lorenzo Mattielli, Orpheus and Eurydice, 1719–24, and the Italian statuary in the North Vista. The Huntington Library, Art Museum, and Botanical Gardens. Photo by John Sullivan.

The Huntington's Testa statues were probably meant, originally, for the garden of one of the several countryside villas in the province of Padua, a town in between Vicenza and Venice, which is known in Italy and all over Europe for the stunning splendor of their 17th- and 18th-century villas surrounded by magnificent gardens designed with a classical aesthetic in mind based on beauty, order, harmony, and balance. Padua is also a town with which I am particularly familiar because I was born and lived there for 32 years before moving to California. 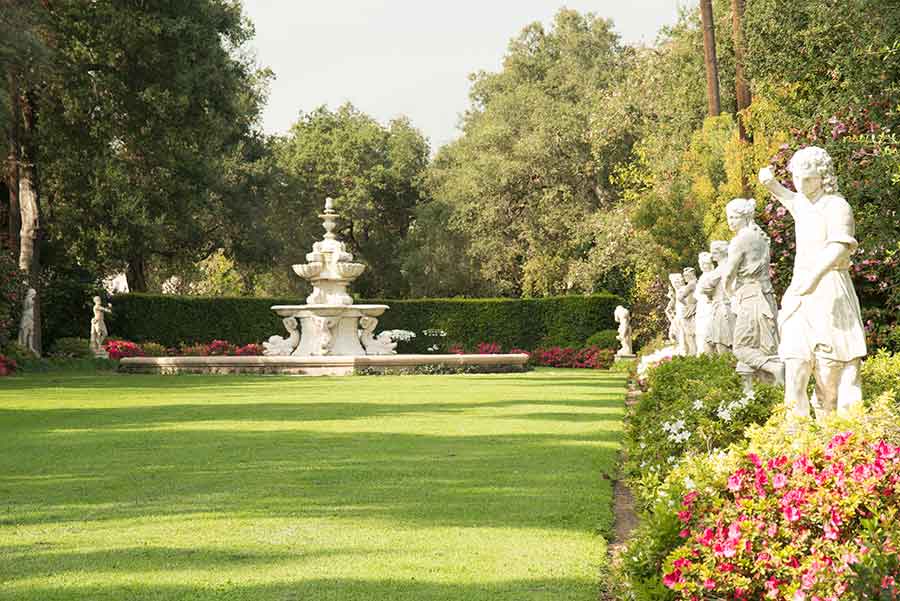 To learn about the more than 30 outdoor sculptures included in the new “Garden Sculpture Audio Tour,” you can do one of the following:

1. Go to The Huntington’s “Tour” webpage and click “Start tour.”
2. Scan one of the QR codes located at the entrance to The Huntington or on signposts in the North Vista.
3. Search for “The Huntington” in either iTunes or Google Play for a downloadable app version of the “Garden Sculpture Audio Tour.”

Anna Engstrom is the manager for the Mapel Orientation Gallery, Audio Programs, and Gallery Welcome Centers at The Huntington.

Sabina Zonno is a Kress Interpretive Fellow at The Huntington and a visiting postdoctoral scholar of Medieval and Renaissance European art at the USC-Huntington Early Modern Studies Institute.

An informative, enjoyable and well-written article. I love the North Vista. I have a photo taken of me, age 8, sitting on the rim of the fountain on a Sunday afternoon. To give you time perspective, I am currently 67. First rate locations never go "out of fashion."

This is a a valuable addition to my knowledge of the estate, one that we never got in our lectures. Many thanks, Anna.