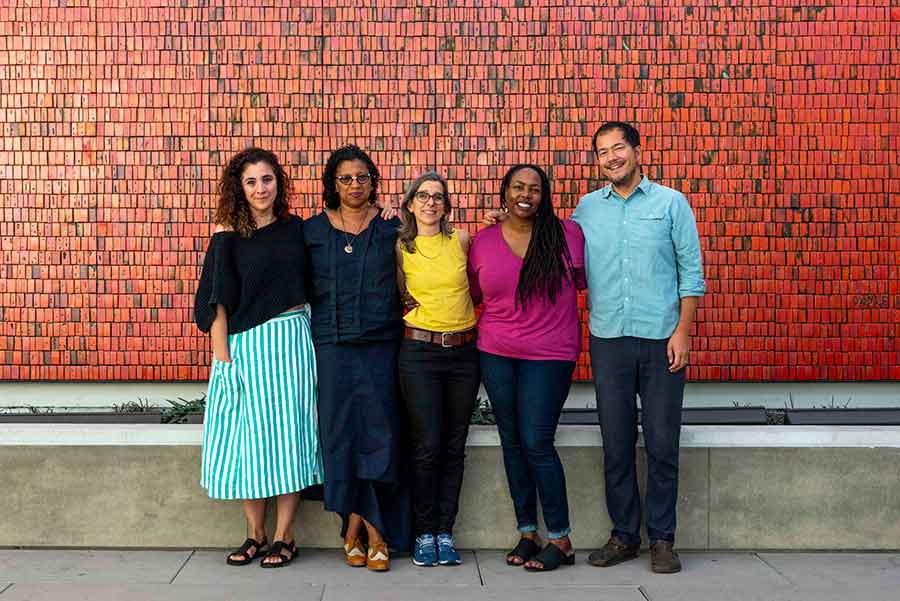 The exhibition “Beside the Edge of the World” features work by the following artists and writers (left to right): Beatriz Santiago Muñoz, Robin Coste Lewis, Nina Katchadourian, Dana Johnson, and Rosten Woo. They stand before Doyle Lane’s Mutual Savings and Loan Mural, 1964, at The Huntington. Photo by Kate Lain. The Huntington Library, Art Museum, and Botanical Gardens.

In January 2019, The Huntington announced that it was collaborating with the Los Angeles arts organization Clockshop to co-curate the fourth year of The Huntington's /five initiative, inviting noted artists and writers to create new work by engaging with The Huntington's collections. A part of The Huntington's Centennial Celebration, which runs from September 2019 to September 2020, the 2019 /five project uses Thomas More's Utopia (1516) as a thematic point of departure. The project has culminated in the exhibition "Beside the Edge of the World," on view at The Huntington in the Susan and Stephen Chandler Wing of the Virginia Steele Scott Galleries of American Art and selected spots throughout the gardens through Feb. 24, 2020.

The exhibition includes works by artists Nina Katchadourian, Beatriz Santiago Muñoz, and Rosten Woo, and by writers Dana Johnson and Robin Coste Lewis. In addition, The Huntington's copy of the first edition of More's Utopia in Latin is on display in the Chandler Wing, along with other rare books and manuscripts. Carribean Fragoza, a freelance journalist who writes about art in Southern California, focuses in this post on the exhibition.

The new visual and written works in “Beside the Edge of the World” guide us boldly beyond the limits of the world documented in archives and validated in official history to venture deeply into new territories. 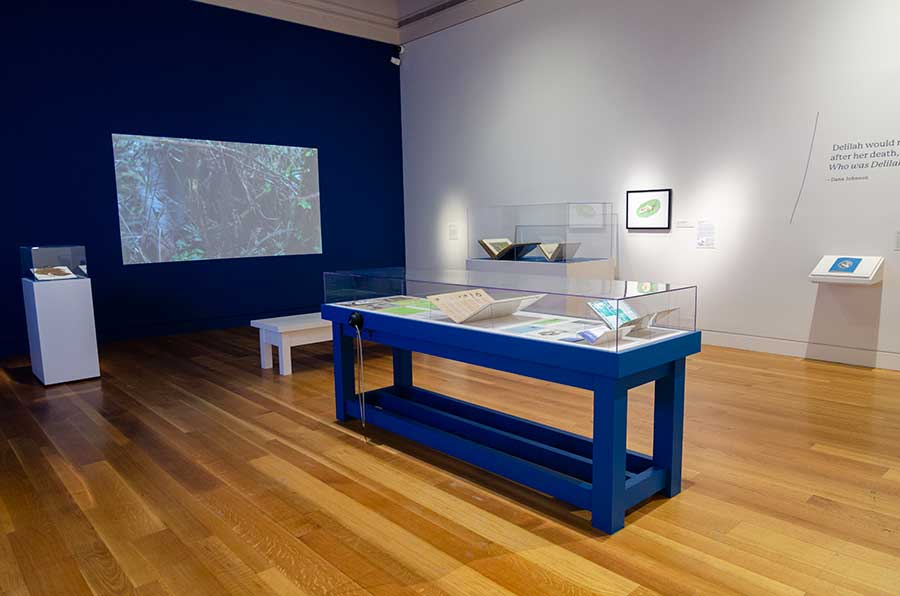 “Beside the Edge of the World” is on view in the Susan and Stephen Chandler Wing of the Virginia Steele Scott Galleries of American Art and selected spots throughout the gardens through Feb. 24, 2020. Photo by Kate Lain. The Huntington Library, Art Museum, and Botanical Gardens.

While Thomas More’s Utopia (1516) is a centerpiece of the exhibition, its purpose is to serve as a point of departure into forgotten lives and histories. The exhibition’s main point of entry is Ursula Le Guin’s interrogation of utopia in response to More’s rendition of a new, ideal world. “What kind of utopia can come out of these margins, negations, and obscurities? Who will even recognize it as a utopia? It won’t look the way it ought to,” writes Le Guin in one of her essays included in a 500-year anniversary edition of Utopia, published in 2016.

Le Guin’s evocative questions initiate the exhibition’s dialogue, prompting visitors to engage with the artists’ and writers’ works in an open-ended inquiry. For the director of Clockshop, Julia Meltzer, it was important to find new ways to explore the idea of utopia instead of simply generating proposals for different versions of it. “Utopia is not only something that we must seek in the future. For this show, we wanted to look to the past for forgotten ideas of utopia that already existed.” 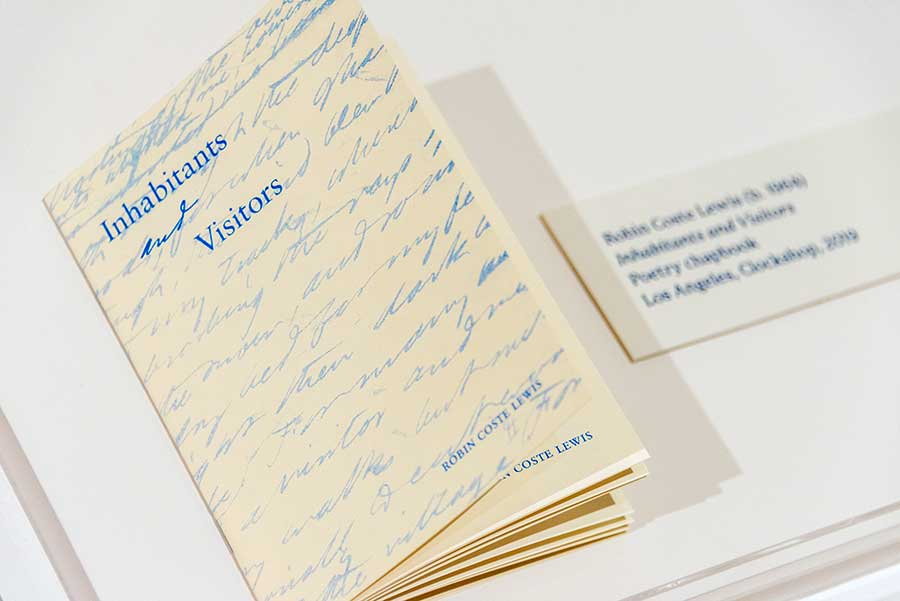 The projects, such as Rosten Woo’s “Another World Lies Beyond,” are seeded with remnants of the past. Consisting of a video animation, an audio tour of The Huntington’s grounds, and an accompanying pamphlet, Woo’s project is grounded on the research of Robert V. Hine (1921–2015), a scholar of the American West who focused on utopian communities in California, as well as on the quixotic journey of John Russell Bartlett (1805–1886), who was commissioned by the federal government to survey the U.S.-Mexico border. The audio tour, inspired by Hine’s increased reliance on oral histories as he lost his eyesight, invites visitors to re-experience the gardens and the landscape through their layered histories. By bridging these histories to the environment, Woo creates a dialogue between indoor and outdoor spaces and objects, as well as between the archives, collections, and the gardens.

For writer Robin Coste Lewis, dialogue with the archives not only breathes new life into our experience of the world, but also revives the archives themselves. “The archives want us, need us, they are sick for our attention,” said Coste Lewis at the opening of the exhibition on Nov. 9, when she read from her poetry chapbook “Inhabitants and Visitors.” For her project, Coste Lewis did more than dialogue with Henry Thoreau’s Walden (The Huntington’s collection includes multiple draft manuscripts of Thoreau’s work)—she chose to directly inhabit his words. Using poetic erasure, a form of found poetry, she selectively deleted words and phrases from the source text to reveal new meanings and overlooked narratives. For one, Thoreau was not a lone resident at Walden Pond. “Thoreau writes about escaped slaves, free slaves that lived in the forest. I loved how their presence in and around Concord interrupted his fantasy of isolation,” shared Coste Lewis. 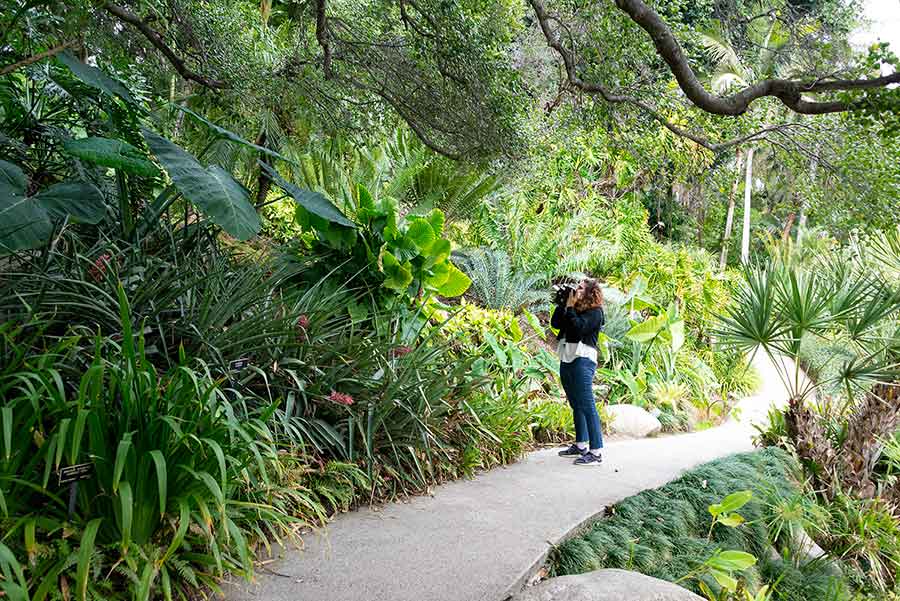 Dana Johnson’s “Our Endless Ongoing,” a short story that grew to a nearly 50-page book, also animates the memory of accomplished historian and journalist Delilah Beasley (1867–1934). A Black woman who spent eight years traveling throughout California recording the stories of Black pioneers, she self-published a book titled Negro Trailblazers of California in 1919. Beasley blazed a trail in her own right. Narrating in Beasely’s voice when Beasely was on her deathbed, Johnson writes: “The only way to write erasure was to tell it in as many ways as possible.”

Beatriz Santiago Muñoz's film project, "Laurel Sabino y Jaguilla," highlights the importance of documenting the natural world before it is obliterated by natural and manmade disaster. Muñoz juxtaposes images from a laboratory, where plant specimens are studied through microscopes, with images of the complex, layered life in a rain forest. The film presents the slow, deliberate, meditative life of plants.

"Each of the projects maps out a different terrain to explore the idea of utopia, and a through line across several of the projects are images and descriptions of the natural world," noted Clockshop's Meltzer. 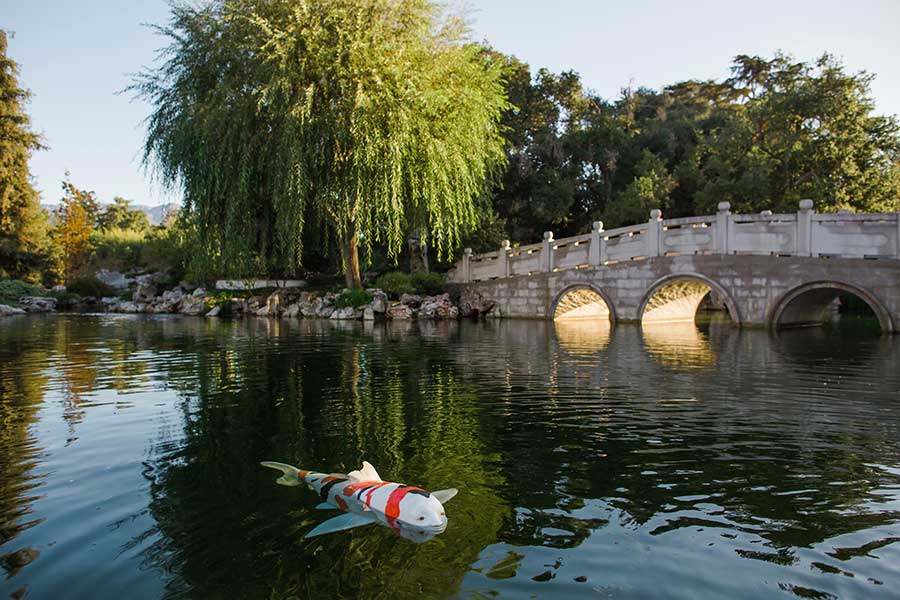 Part of what it means to envision the possibilities of utopia, or to uncover its previous incarnations, includes exploring the porous edges between the natural and the supernatural world. In Nina Katchadourian’s “Strange Creature,” the natural world is perforated with portals into a mystical world. She found echoes of the wildly imaginative 16th-century maps “Islandia” in Theatrum Orbis Terrarum (1570) and “Monstrosus Cyprinus” in Monstrorum Historia (1642), as well as in the Lake of Reflected Fragrance in The Huntington’s Chinese Garden, where she introduced a sculpture of the mysterious Ru-fish, a type of carp that is said to have a human face. The creature swims beneath the surface of the rippling water, sometimes revealing its face, but most often concealing it.

This year’s /five artists and writers explored the loose seams between the known and the unknown. Even as they took approaches and produced interpretations of The Huntington’s collections in ways that differ from those of most academic scholars, they yielded work that echoes each other’s. For Huntington Curator of Photography and Visual Arts Jenny Watts, one of the pleasures of being involved in the /five initiative has been witnessing this happen. “It’s always a revelation. It’s surprising how artists can work in isolation from each other but end up producing finished work that overlaps and shares so much synergy,” she said. 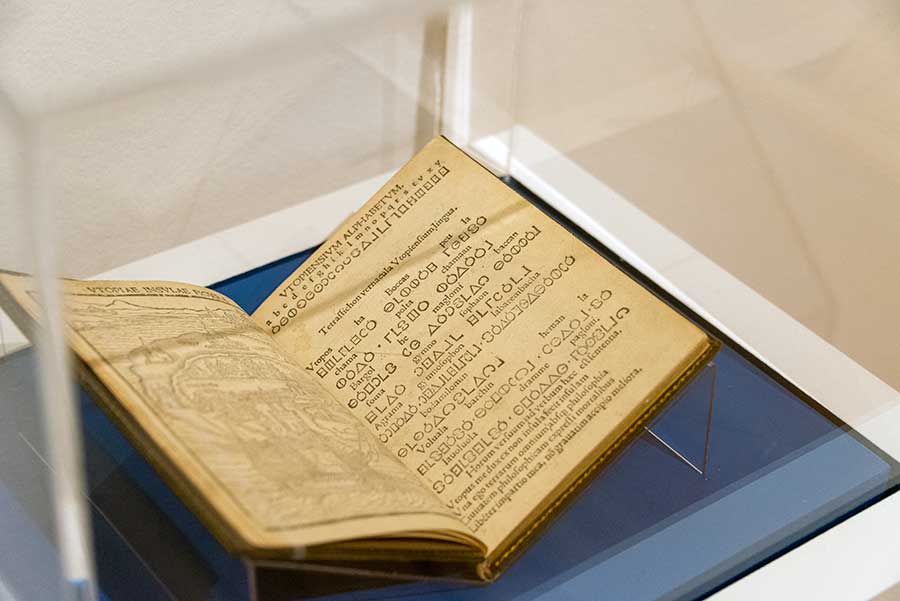 Sir Thomas More (1478–1535), Utopia , 1516. More’s book served as a thematic point of departure for the artists and writers whose works are featured in “Beside the Edge of the World.” Photo by Kate Lain. The Huntington Library, Art Museum, and Botanical Gardens.

The collaborations of The Huntington with partner arts organizations such as Clockshop have made /five a unique initiative. “People like talking about collaboration, but a true collaboration, as this one was, turns out to be challenging. There’s a lot of give and take,” said Watts, who has spearheaded /five residencies since 2016. As with any fruitful collaboration, she noted, having faith in the expertise of the artists as well as of the partner organizations has been essential. “It’s all about trust. In the end, the project turns out to be richer as a result of working together.”

Support for this exhibition is provided by the Mike Kelley Foundation for the Arts, the Philip and Muriel Berman Foundation, the Pasadena Art Alliance, and WHH Foundation.

“Beside the Edge of the World” is a Huntington Centennial Exhibition. The Huntington’s Centennial Celebration is made possible by the generous support of Avery and Andrew Barth, Terri and Jerry Kohl, and Lisa and Tim Sloan.