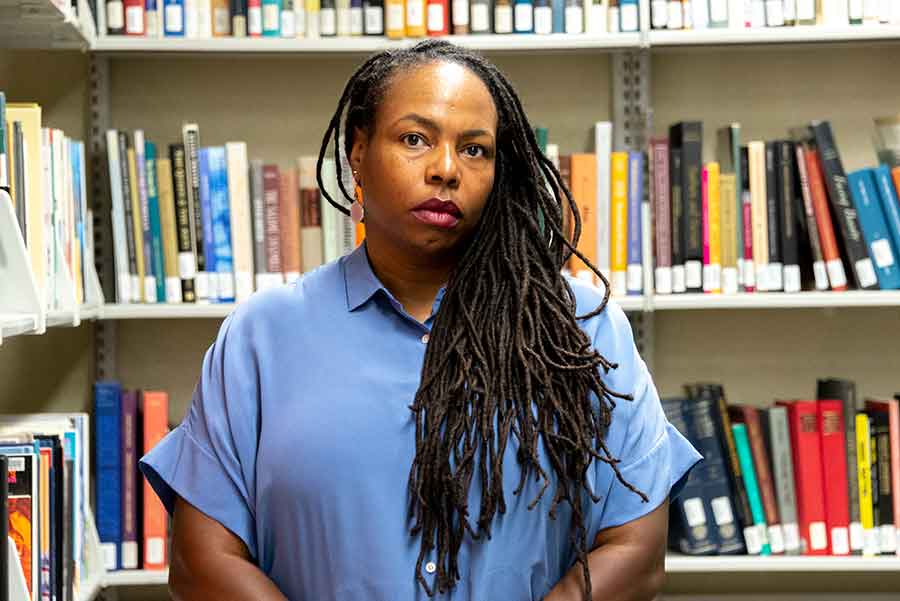 Dana Johnson, writer and associate professor of English at the University of Southern California, in the Library at The Huntington. Photo by Kate Lain.

Carribean Fragoza, a freelance journalist who writes about art in Southern California, focuses in this post on Dana Johnson, writer and associate professor of English at the University of Southern California. Johnson’s work demonstrates a long-standing interest in how class, good fortune, and race influence ideas about, and proximity to, utopia. During her research at The Huntington, she explored the work of Delilah Beasley, a historian and news columnist who wrote about Black pioneers in her groundbreaking book Negro Trail Blazers of California.

It is not an accident that many utopian dreams—as well as horrific fantasies—have found a home in California’s idyllic landscapes. D. W. Griffith shot the notoriously racist film Birth of a Nation (released in 1915) in Southern California, setting scenes in lush landscapes and sunny riverside plains. Produced during the earliest days of American cinema, the film, based on the novel The Clansman, by Thomas Dixon Jr., was the first feature length film (it ran for three hours) that included an intermission and orchestral accompaniment. Epic in form, the film provided a pro-Confederacy slant on the Civil War and Reconstruction and depicted African Americans negatively to justify their loss of rights. 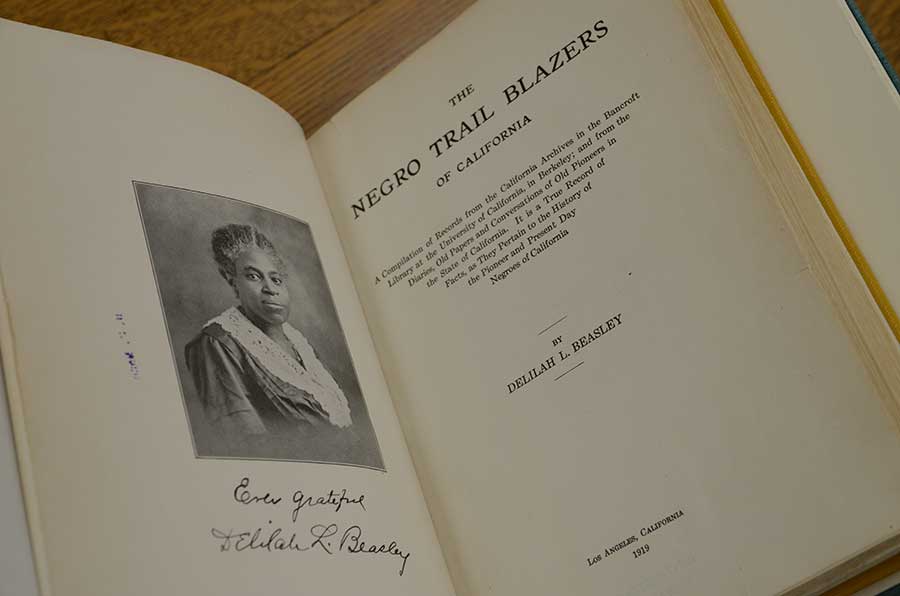 Frontispiece and title page of Delilah Beasley’s The Negro Trail Blazers of California, 1919. This book is on view in the "Nineteen Nineteen" exhibition at the MaryLou and George Boone Gallery through Jan. 20, 2020. Photo by Lisa Blackburn.

But as monstrous Goliath met his match in David, this film was fiercely and necessarily challenged not by one contender but by scores of people who had a different vision of the nation’s future. Among them, journalist and scholar Delilah Beasley used all of her platforms to eloquently and tirelessly speak and write against this and other racist depictions of African Americans in the United States.

Beasley worked diligently to uncover and shine a light on the ignored and forgotten lives of Black Californians, understanding that doing so had the power to dismantle dangerous narratives such as Griffith’s. A woman of sharp, yet wide-angled perspective, she likely anticipated the tides of erasure that would wash over her and the people she chronicled.

Writer Dana Johnson has committed to rescuing Delilah Beasley’s remarkable story. Johnson’s project for the /five initiative draws on her extensive research of Beasley’s professional and personal trajectory, as well as Beasley’s magnum opus, Negro Trail Blazers of California (1919). In her fictionalized account of Beasley’s life, a short story included in a limited-edition book titled Trailblazer: Delilah Beasley’s California, published by Clockshop and The Huntington, Johnson not only seeks to rescue Beasley’s memory, but to reanimate her, using the alchemy of her artistic imagination.

This venture, of course, came with some challenges for Johnson. “Reading was a joy, but incorporating what I had read was daunting. I just wanted to get it right.” 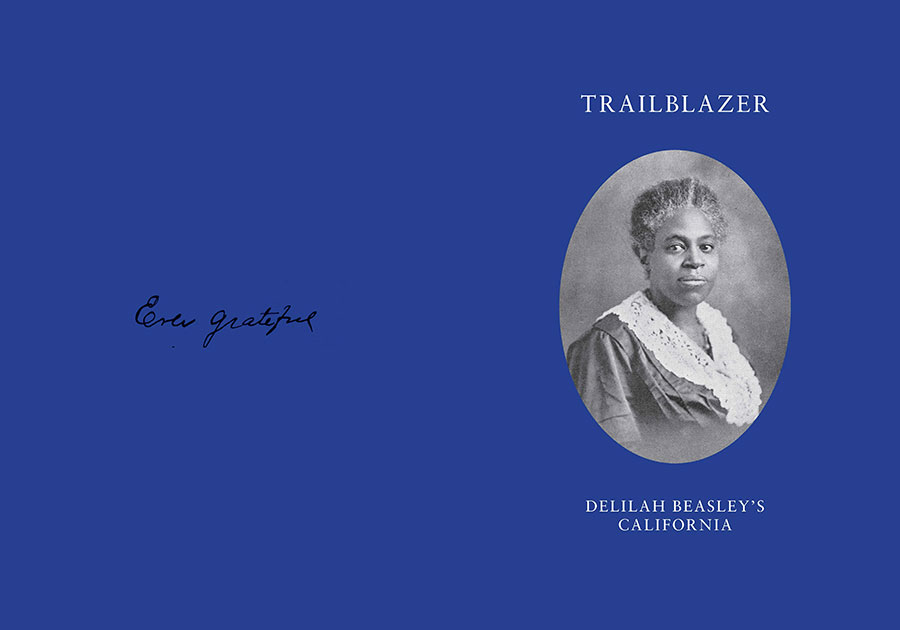 Johnson’s short story, along with a biographical essay of Beasley, is included in a limited-edition publication, Trailblazer: Delilah Beasley’s California, published by Clockshop and The Huntington. A copy of the book will be on display as part of the upcoming exhibition “Beside the Edge of the World.”

Johnson felt compelled to do more than state facts and fill in timeline gaps. Perhaps most importantly, she wanted to tap into the personal life of a fiercely intelligent, self-driven woman. “I decided I needed to concentrate on making her human, on her interiority,” Johnson says. For example, Johnson’s story opens in 1939 with Beasley on her deathbed in Oakland, California. “I had to fictionalize her thoughts on her deathbed,” she explains.

Though the weaving of fact and fiction is a tricky feat, it is not new to Johnson, who has written a story that includes a fictionalized Henry E. Huntington; it appears in her most recent collection of short stories, In the Not Quite Dark. Artistic license has to be balanced with delicate choices, such as how to assemble factual information in service to a fictional narrative. It was important for Johnson to convey Beasley as a person struggling to keep afloat as an independent Black woman and intellectual in the early 20th century.

“I wanted to create a portrait of Beasley that incorporated subjects that were important to her, such as Blackness and poverty,” Johnson says. 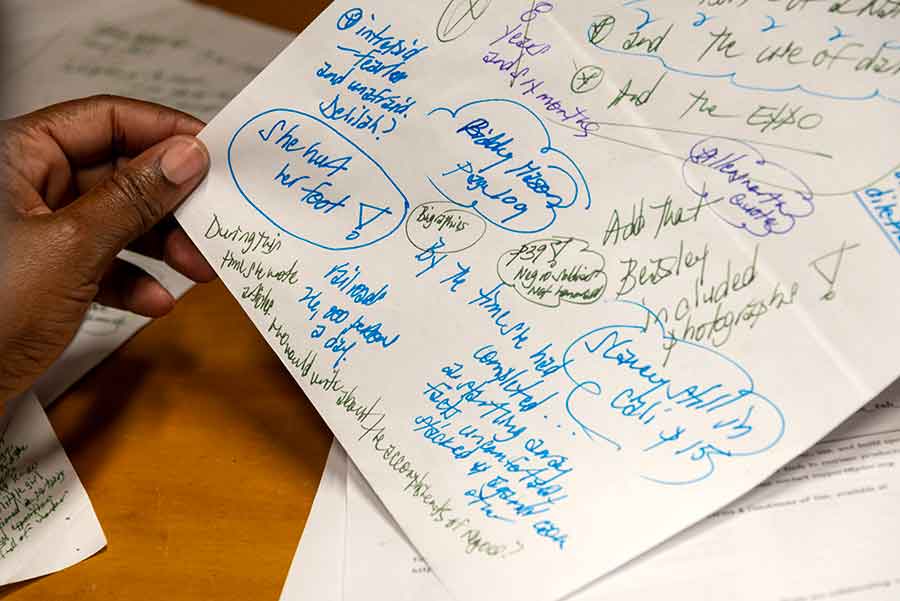 The life of Beasley is tied to the lives of so many overlooked women and men whose accomplishments, grand or mundane, mark the journey of this nation. To rescue the story of Beasley is to recover theirs as well.

“Delilah Beasley was so in love with California, and she thought it was such a unique place,” Johnson says. “But even here, Black people were not really free, especially at a time when eugenics was gaining traction. California was definitely a place of achievements, but there were also a lot of problems.”

Today, as we move forward into an uncertain future, we seem also to be trudging back into a history many people thought had been left behind. We remember details of apartheid, genocide, and slavery in the U.S. as we begin to see their vestiges reemerge with violent clarity. Yet, the stories of people like Delilah Beasley, who paved the way to a new vision for this country, can help guide us forward once again.

Hats off to Dana for reigniting Historical pioneer Delilah Beasley's passion in keeping African American contributors to California history alive. While working to help create the California State Senate's 2016 Resolution honoring the 150th anniversary of the Buffalo Soldiers, I was honored and privileged to experience the stories told by surviving members that were stationed and ultimately settled in California. Recognition of African American contributions to the history of our State is long overdue.

Dana Johnson's book Trailblazers, about Delilah Beasley, was one of my Christmas gifts. I was delighted to read about this significant but sadly overlooked "pioneer" and her passion for this state and those who worked to make it what it is today. Thank you for your hard work and diligence in bringing Miss Beasley to life on the pages.

Incredible work. Thank you to Dana Johnson for writing and researching this work. I was able to pick up and read this book over the weekend. There is so much history that has been kept from us and it is important for these histories and lives to be shared so that our communities do not remain ignorant of the people that helped influence our modern day experiences.

The Allure of Aroids
Jul. 26, 2022 by Sandy Masuo
0 Comment(s)
When you step into The Rose Hills Foundation Conservatory for Botanical Science at The Huntington, you are instantly transported to another world. Consistently warm and humid conditions create a pocket...
More