Pinkie and Blue Boy as you've never seen them before.

There they were. Pinkie and Blue Boy all chopped up into a million little squares and reassembled into the most glorious shellacked folding screen I had ever laid eyes on. I was in love.

It had already been a delightful opening night of a contemporary textile show at the Craft & Folk Art Museum in Los Angeles when I decided to pop upstairs to check out the first solo exhibition of local found-materials art legend Clare Graham, whose work I was familiar with through MorYork, his studio and gallery in Highland Park. After making my way through the veritable funhouse of sculptured curiosities, soda can tabs, and teddy bear eyeballs in the main room, I wandered around the corner into a smaller second room. And there was the screen. 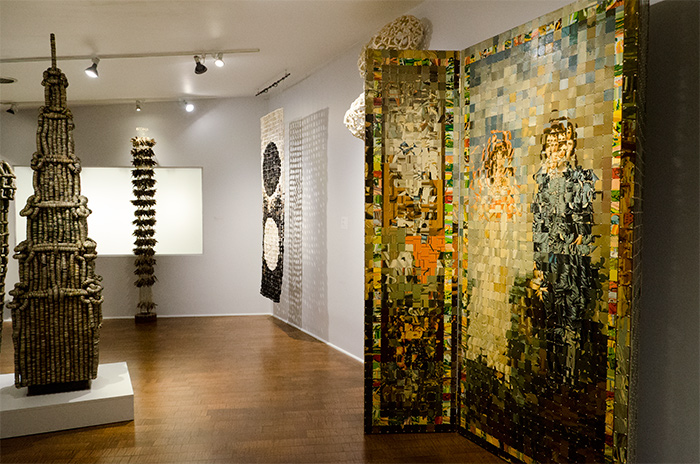 The folding screen stands alongside whimsical and impressive sculptures of bottlecaps, puzzle pieces, Scrabble tiles, buttons, and the like.

Now, I’ve spent a good amount of time staring at the time-honored treasures that are the original, actual, centuries-old Pinkie and Blue Boy, proudly holding court across from one another in The Huntington’s Thornton Portrait Gallery. That rendering of his shiny blue satin folds! Her otherworldy stance and stare! That brushwork! That texture! Impressive works to be sure.

Graham’s reimagining is a delight. In it, Pinkie and Blue Boy—eternally paired in the popular mind even though they were painted by two different artists and 24 years apart—no longer face one another as they do in the gallery; they now stand side by side as they greet viewers. Each is composed of a multitude of squares cut from quite a few paint-by-number interpretations of the masterpieces and reassembled in an orderly-yet-jumbled grid, with features like eyes and mouths and fabric folds repeating in a cubist visual swarm that’s kept in check by steadfast horizontal and vertical seams punctuated with round upholstery tacks. It reads as both an irreverent send-up and a doting homage to the pair of European paintings that had never met before Henry Huntington first introduced them here in San Marino back in the 1920s. 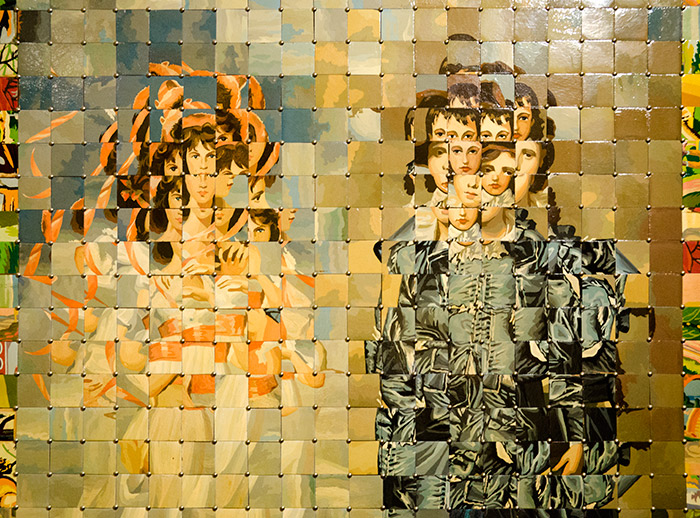 Like the rest of Graham’s work, the screen is a bizarre and joyful restructuring of a familiar world. It is part of a wonderland built from mind-boggling quantities of paint-by-numbers, bottle caps, teddy bears, Scrabble tiles, and other consumer-culture refuse he has collected, scrubbed clean, and rendered new again.

It can be pretty easy to look at dominoes, buttons, and rulers in our daily lives and memories and forget to consider what went into making them and how they got into our hands. But it’s completely impossible to look at Graham’s reworkings of these everyday objects without being blown away by the astonishing amount of time, labor, imagination, and deliberation that he has put into creating them. His works are not only delightful spectacles to behold, but also paeans to the craft, to the artistry involved in making them. 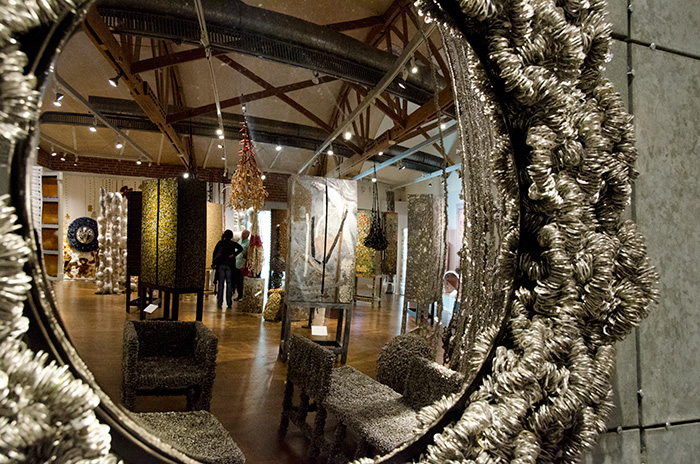 A view of the exhibition's main room, as seen through a Graham-made, soda can tab–festooned looking glass.

Make the trek across town. Go see the screen—and the rest of Graham’s work—before the show closes. It’ll bring a smile to your soul. And if you're on Instagram, post some pictures of the screen and tag them #PBBremix so we can find them and show them to Pinkie and Blue Boy.

Note: I hereby rescind the statement I made on Instagram the night I first saw the screen: “@thehuntingtonlibrary should totally acquire this.” I want it for my living room.