June 11, 2022 - The Blue Boy is back on view in the Thornton Portrait Gallery in the Huntington Art Gallery.

The Blue Boy's Trip to London
The Huntington lent its iconic "Blue Boy" to the National Gallery, London for an exhibition exactly 100 years after Gainsborough’s masterpiece left London for California. The four-month exhibition ran from Jan. 25–May 3, 2022 before he returned home to The Huntington permanently. Read

IN THE NEWS: July 9, 2021 - Los Angeles Times: Let 'The Blue Boy' have his safe sojourn to London
After several years of considerable examination and discussion, and after instituting a rigorous set of protocols, the Huntington has decided to lend Thomas Gainsborough’s “The Blue Boy” to the National Gallery, London — but only upon expert advice and only under very specific, restrictive conditions. The long-term well-being of this iconic work has always been the Huntington’s guiding principle for any discussion about the possibility of a loan. Read 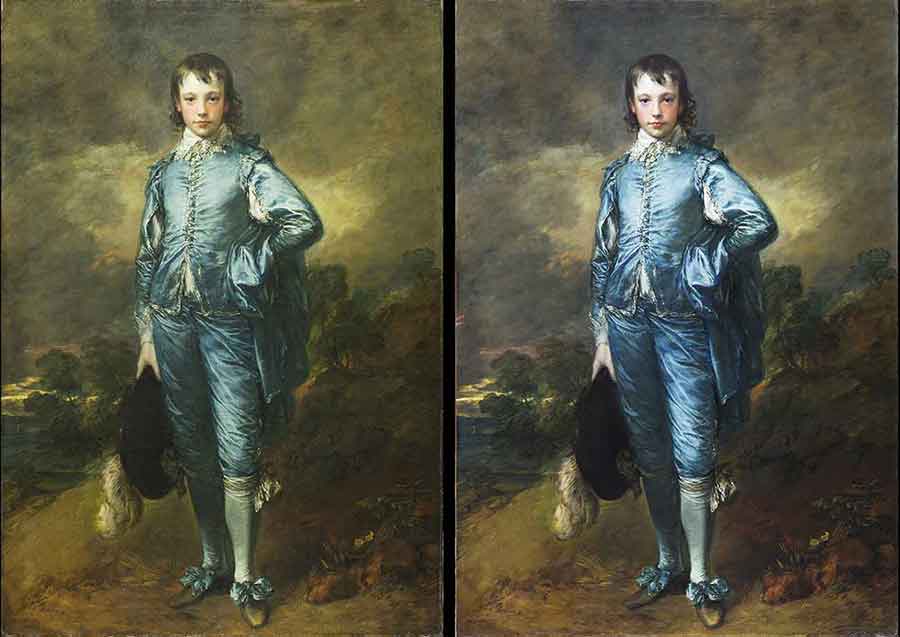 Thomas Gainsborough's (1727–1788) iconic painting first appeared in public in the Royal Academy exhibition of 1770 as A Portrait of a Young Gentleman, where it received high acclaim, and by 1798 it was being called "The Blue Boy"—a nickname that stuck. Henry E. Huntington (1850–1927) purchased The Blue Boy in 1921 for $728,000, the highest price ever paid for a painting at the time. By bringing a British treasure to the United States, Huntington imbued an already well-known image with even greater notoriety on both sides of the Atlantic. But beyond its cultural significance, the painting is considered a masterpiece of artistic virtuosity. Gainsborough's command of color and mastery of brushwork are on full display in the painting, made even more apparent as a result of the conservation and restoration of this priceless portrait in the 18-month initiative and exhibition, "Project Blue Boy ."

In 2017, conservators began a preliminary analysis of The Blue Boy using a range of imaging techniques. This was followed in 2018 by "Project Blue Boy," a restoration project that offered visitors a glimpse into the technical process of conserving one of Gainsborough's finest works. During the public phase of the project, visitors were able to interact with The Huntington's senior paintings conservator Christina O'Connell while she worked to conserve the painting in-gallery. Now off view for final inpainting, varnish, technical study, supportive backing, and framing adjustment, the project concludes on March 26, 2020, with the restored Blue Boy returning to its original place in the Thornton Portrait Gallery.

Visitors get a glimpse into the technical processes involved in conservation treatment in Project Blue Boy.

The Blue Boy in the Thornton Portrait Gallery before conservation.

More About The Blue Boy

The Science Behind Conservation

Who is The Blue Boy,  and why is the painting so important?
More

The Blue Boy undergoes its first major technical examination and conservation treatment in public view, in a special satellite conservation studio set up in the west end of The Huntington's grand portrait gallery. Watch

Science journalist Usha Lee McFarling sat down with Christina O'Connell, paintings conservator for Project Blue Boy, and John House, ear surgeon of the House Ear Clinic in Los Angeles, as they talked over the project.
More

The Atlantic: Saving One of Western Art’s Most Iconic Paintings

Saving One of Western Art’s Most Iconic Paintings

Senior paintings conservator Christina O'Connell goes "eye to eye" with The Huntington's most famous painting with the help of a Hi-R NEO 900 Haag-Streit surgical microscope, on loan from Haag-Streit USA. Watch

X-rays of 'Blue Boy' and 'Pinkie' and other British masterpieces reveal ghost images and the choices the artists made while painting. More

So The Blue Boy is a big deal. But what’s the story behind the famous painting’s frame? More 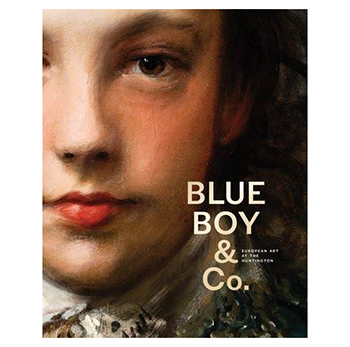 A blue-themed musical companion to the Project Blue Boy exhibition. Enjoy the sounds and share the playlist with your friends. (A free Spotify account is required to access playlist)