How Do You Frame a Masterpiece? 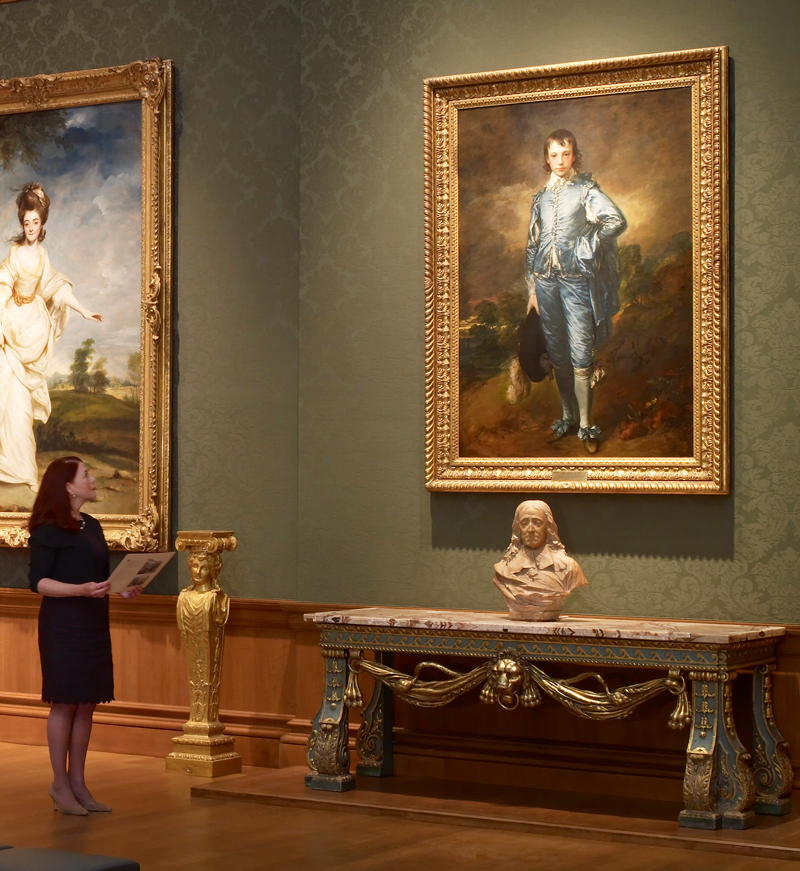 The Blue Boy in its current frame, which will be replaced in the coming month.

In 1921, Henry and Arabella Huntington purchased what would become the most famous work of art in their collection: The Blue Boy (1770) by Thomas Gainsborough. Its celebrity rests on many factors, not least of which is the superb quality of the painting, with its brilliant brushwork and the frank earnestness of the boy’s gaze. Its price—at roughly $725,000—was the highest ever paid for a work of art up to that time. The scandal provoked by its departure from Britain also increased its notoriety. The fact that it was exhibited at the National Gallery, London, after the art dealer Joseph Duveen sold it to the Huntingtons further expanded its fame.

So The Blue Boy is a big deal. But what’s the story behind the famous painting’s frame? 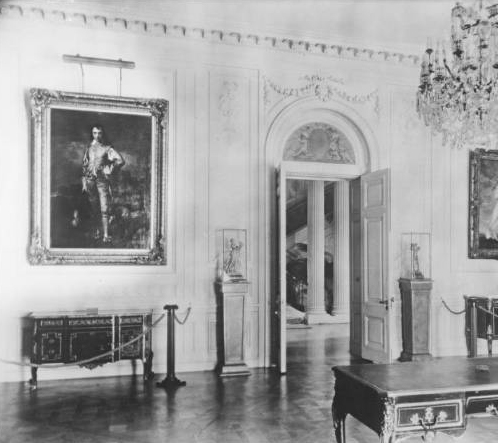 The painting as it appeared in the Huntington Art Gallery in the 1920s and early 1930s in a frame that was replaced in 1938.

When the painting arrived in San Marino, The Blue Boy’s frame was likely the same one in which it was displayed by the previous owner, Hugh Grosvenor, 2nd Duke of Westminster. By 1938, the Huntington’s curator of art collections, Maurice Block, was ready to respond to complaints about the painting’s “bulky 19th-century frame.” According to a memo written on May 6 of that year, “We have cut down one of our old frames to put the Blue Boy into it.”

The replacement frame appears to have been an extra supplied by Duveen and probably had been in storage for some time in the Huntington Art Gallery basement. This frame is of the so-called Carlo Maratta type, widely used in England from 1750 through the turn of the 20th century. In fact, several Duveen-supplied Maratta frames can be seen on paintings in The Huntington's Thornton Portrait Gallery, including George Romney’s portraits of Lady Beauchamp-Proctor, Jeremiah Milles, and Rose (Gardiner) Milles; and Gainsborough’s portrait of Elizabeth Beaufoy, later Elizabeth Pycroft. (Other frame patterns in the portrait gallery include the very finely carved Louis XV style frame around Pinkie and a French Regence style frame around Diana, Viscountess Crosbieby Reynolds.) 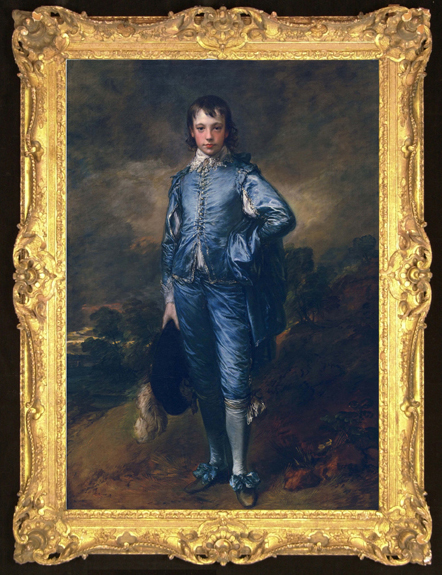 This digital rendering shows the new frame as it will appear on The Blue Boy after installation in late November.

The Huntington recently began exploring ways to reframe The Blue Boy. We first approached Michael Gregory, frame specialist at Arnold Wiggins & Sons in London, a workshop specializing in the adaption and reproduction of antique frames. It supplies frames to the Royal Household and London’s National Portrait Gallery.

Noting that the frame around The Blue Boy appeared a bit heavy on the picture, Mr. Gregory suggested several 18th-century English frames as possible replacements. Working with Kevin Salatino, the Hannah and Russel Kully Director of the Art Collections at The Huntington, I helped select a splendid Rococo example that complements the framing of Thomas Lawrence’s Pinkie.

Plans are now underway to reframe The Blue Boy by the end of November. The reframing is made possible by a gift from longtime Huntington donors Jim and Joan Caillouette.

Catherine Hess is the chief curator of European art at The Huntington.

..unobtrusive, but not too modern please...

Thank you for responding to my concerns, expressed on Twitter, that a Rococo frame was inappropriate for this painting (c.1770), given that it was painted during Gainsborough's Bath period (1758-74), when Jacob Simon's meticulous research has revealed that his full-length portraits were more likely to be framed in 'Marattas'. Jacob's article can be found here: http://www.npg.org.uk/research/programmes/the-art-of-the-picture-frame/a... .
The point about the choice of a Rococo frame to complement the frame on Lawrence's Pinkie is slightly ironic, given that the current 'Maratta' on The Blue Boy is a Duveen frame, and Pinkie's revival Louis XV frame is also by Duveen, and is quite as heavy for a wisp of a girl as that on the rather more robust Blue Boy.
Furthermore, a 'Maratta' is - as it were - more 'masculine' in type than is a Rococo frame, and The Blue Boy is nothing if not aggressively boyish.
Still, it's your money!

Some readers have questioned our decision to replace a Maratta-type frame, of the kind often used by Gainsborough himself, with a Rococo frame. While it is true that Gainsborough used so-called Maratta frames, the frames would have been contemporary with his paintings, dating, that is, to the middle or second half of the eighteenth century. The reproduction Maratta frame in which "The Blue Boy" was placed in the 1930s was just that: a 20th-century reproduction. Given the significance of this painting, we decided to return it to an eighteenth-century frame, in this case a Rococo frame, a style that Gainsborough also favored. Such a frame is perfect for our gallery since it complements the frame on another superb work across the room: "Pinkie" by Thomas Lawrence.

Should you wish to see one of Gainborough's finest original Rococo pierced Frames by one of the leading London Framemakers of the era, this one derives from his early 1662 "Bath period", just a few years before "Blue Boy", and it may assist your research.
It is almost certainly by the London Framemaker ( & later to the King), the Hugenot Framemaker, Isaac Gooset. I invite you to view within the past Photos on my "graemecameron2" Twitter site. It graced his 3/4 Length portrait of Allee Hanson of Bath, and is a "Lighter" open Rococo style to the heavier one you are about to use, due to the ornate piercing, and far superior to his plainer styles of the "Maratta" type, etc. Interestingly, I still retain it today. I hope this may help with your project.
With kind regards, Graeme Cameron

Thank you for your thoughts on this. Passing this along to our chief curator of European art (the author of this post).

I believe Gainsborough would have initially chosen a rococo style for this painting. Design wise to the painting and not due to the era... He dictated each ornament
on the frames he used, and actually carved his early frames. So he mastered complimenting the painting and frame, and to me, being an artist and compo frame carver, Blue boy looks odd or incomplete in the Maratta/Rosa frame and sings in the rococo..

M<ost importantly the tones on the new frames patina should compliment the painting. I am unfortunately not privy to old original Gainsborough frames and his frame tone choices for them, he was a master at framing and to get it close to his intentions would be eclectic...,

If i was finishing the new frame i would find a similar Gainsborough painting regarding color tones and still has the original Gainsborough frame, and use those rame patina tones designed by Gainsborough, on the blue boy frame tones...as it would be closest to his intentions and as eclectic as one could get...

So interesting. I am glad to see roses are still out in October as I shall be visiting from Cape Town during the first week. There seems to be so much to see at the Huntington. Elinor Fletcher