Currier & Ives, "The Express Train," lithograph, 1870. From the private collection of James Brust.

In a petition submitted to the U.S. Congress on Jan. 29, 1845, New York merchant Asa Whitney proposed one of the most audacious ventures in American history: the construction of a railroad from Lake Michigan to the Pacific Ocean, spanning two-thirds of the North American continent. In bold and stirring words, describing how such a rail network would revolutionize “the entire commerce of the world,” Whitney urged the federal government to underwrite the ambitious project.

Whitney’s vision, although neither the first nor the last of its kind, ignited the imagination of many Americans and embedded the notion of a transcontinental railroad in the ongoing national debate about the young republic’s destiny. Over the next four decades, many similar visions, ranging from the wildly improbable to the immensely practical, would captivate popular attention and enthusiasm, even after the completion of the first transcontinental railroad on May 10, 1869.

To tell the story of this extraordinary achievement and its implications, The Huntington will mount a major exhibition, “Visions of Empire: The Quest for a Railroad Across America, 1840-1880,” running from April 21 through July 23 in the MaryLou and George Boone Gallery. The exhibition coincides with the sesquicentennial of the passage of the Pacific Railroad Act in 1862.

Drawn from the Library’s splendid holdings about railroading in America, the exhibit will remind viewers that the monumental achievement of spanning the continent was not merely a story of high adventure in the trans-Mississippi West but an epic of national development that unfolded during much of the 19th century. 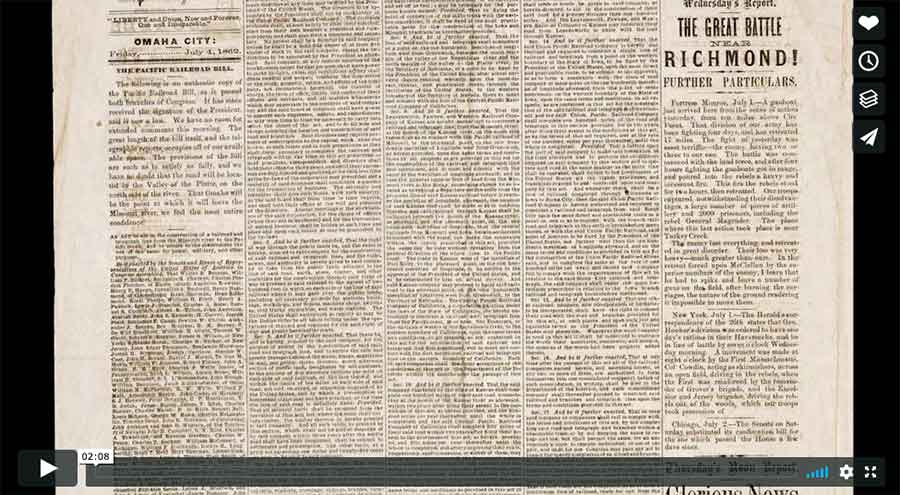 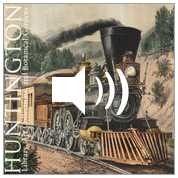 Peter J. Blodgett, The Huntington’s H. Russell Smith Foundation Curator of Western American History, speaks about goals and themes of “Visions of Empire: The Quest for a Railroad Across America, 1840–1880,” an exhibition that coincides with the sesquicentennial of the passage of the Pacific Railroad Act and takes on the development of the first transcontinental railroad across the United States.

Using displays of original letters, diaries, photographs and other rare materials, “Visions of Empire” begins by highlighting the ambitious efforts to promote the transcontinental railroad in the 1840s. It then follows the progress of surveyors and engineers as they worked their way westward during the 1850s in search of feasible routes. It will also point out the opposition on the part of some Americans to deploying government resources toward such an enterprise. Eventually becoming entangled with the national crisis over slavery, the idea of a transcontinental railroad only came to fruition as Lincoln and his Republican Party, reeling from the secession of the Southern states, launched major new initiatives to reinvigorate economic, political, and social ties that would hold the country together.

The Pacific Railroad Act of 1862, one of the centerpieces of that effort, made support for the Union Pacific and Central Pacific railroads possible through government bonds and public land grants. “Visions of Empire” recounts the unremitting struggles of these ventures in the face of many obstacles, not least of which were the challenging geography and the resistance of indigenous peoples such as the Sioux and the Cheyenne.

The exhibition will be rounded out through the assistance of three lenders—James Brust, the California State Railroad Museum, and Jay Last—with artifacts such as hand tools used by railroad laborers, a payroll sheet for Chinese employees of the Central Pacific Railroad, advertising cards for clipper ships carrying goods and passengers to Gold Rush California, a unique copy of a map depicting the burgeoning American railroad network in the aftermath of the Civil War, and a set of three original Currier & Ives lithographs presenting American railroads in vibrant color.

“Visions of Empire” follows the impact of the developing web of railroads through the 1870s and 1880s on everything from agriculture and immigration to politics and finance to tourism and leisure. It illuminates the creation of an entirely new “built environment” on the American landscape, the mobilization of massive industrial and financial resources, and the alteration of the relationship between private enterprise and governments on all levels.

Could you send a text message in 1862? See an adventure unfolding in 3D? Walk across the continent in a single day? Visitors can get a closer look at the world of early railroad and telegraph technology in an augmented learning space adjacent to the "Visions of Empire" exhibition. The room will allow visitors to make personal connections to the materials on display in unique and engaging ways. Highlights include a stereograph viewer for looking at early three-dimensional photographs of railroad construction, a hand-on Morse code station, and a "walkable" map of the United States tracing the route of the iron horse.

The Iron Horse in the Garden: Railroads and the Western Environment, the Southern Pacific Story
May 7 (Monday) 7:30 p.m.
Historian Richard Orsi, author of Sunset limited: the Southern Pacific Railroad and the development of the American West, 1850-1930, discusses his continuing research into the ambiguous environmental legacy of western railroads. Although the source of great havoc in wilderness landscapes, farmlands and cities, these enterprises also encouraged more modern and balanced environmental practices and more “sustainable” human relationships with nature. A book signing follows the talk. Free; no reservations required. Friends’ Hall.

Lecture Series
May 10, 17, and 24 (Thursdays) 10–11:30 a.m.
Join curator Peter Blodgett for a three-part lecture series that will include topics such as the construction of the first transcontinental railroad, the influence of railroads on America’s visual culture, and the promotion by railroads of tourism in the 19th-century American West. Each illustrated talk will be followed by a discussion in the gallery. Members: $55. Non-Members: $65. Registration: 626-405-2128.

Preschool Series: Ticket to Travel
May 9, 16, 23, and 30 (Wednesdays) 10 a.m.–noon
Pack your bags for an adventure into the world of railroads as we embark on an exploration inspired by the exhibition. With instructor Laura Moede, each class includes a visit to the garden or gallery, art projects, stories, and more. Fee includes one accompanying adult. Ages 3–4. Members: $85. Non-Members: $95. Registration: 626-405-2128.

After-School Adventures: All Aboard!
May 23 (Wednesday) 3:30–4:30 p.m.
Travel back to the days of steam engines and railroads. Using stories and art activities and a visit to the exhibition, young engineers will journey into the world of travel in this class led by instructor Laura Moede. Ages 5–6. Fee includes one accompanying adult. Members: $15. Non-Members: $20. Registration: 626-405-2128.

Teen Workshop: A Taste of Art—American Culinary Tour
May 26 (Saturday) 10 a.m.–1 p.m.
Explore the role the railroad played in American dining habits while viewing the exhibition. After a visit to the gallery with chef and art educator Maite Gomez-Rejon of ArtBites, teens can learn some basics in the kitchen while preparing comforting American cuisine inspired by 19th-century cookbooks. Ages 14–17. Members: $60. Non-Members: $70. Registration: 626-405-2128.