A Colorful Season in the Gardens 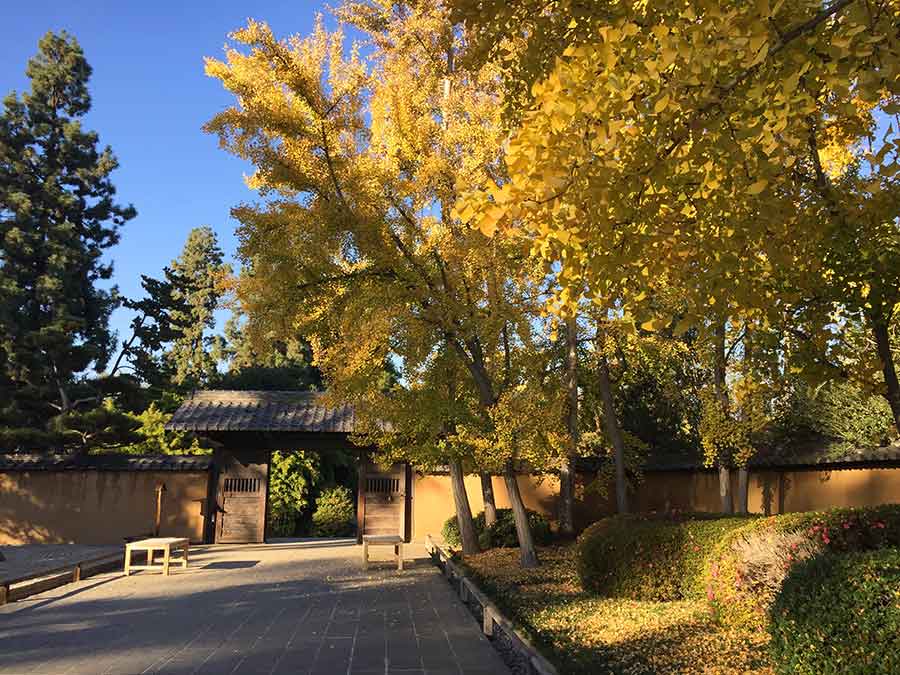 The golden leaves of Ginkgo biloba trees, seen here in the Japanese Garden’s Zen Court, provide a spectacular display of fall color and are a perennial favorite with visitors. Photo by Christine Quach.

The poet John Keats called autumn a season of “mellow fruitfulness.” It is a time of ripeness and abundance that completes a life cycle begun with the first buds of spring. In autumn, nature’s alchemy turns leaves to gold as winter draws near; birds and small animals feast on a bounty of berries, nuts, and seeds; and cool-weather flowers begin to dazzle the eye with rich colors, nestled in the landscape like jewels. 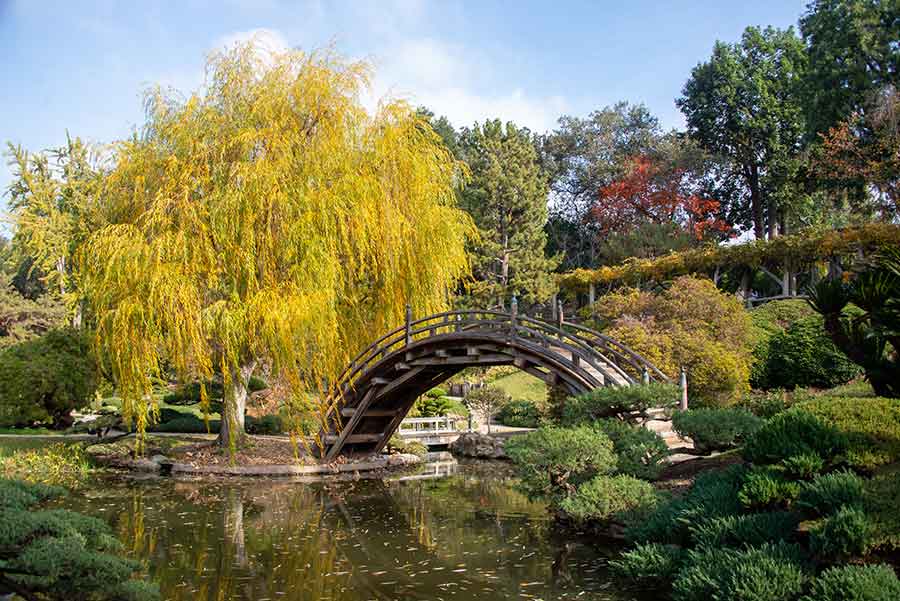 At The Huntington, as elsewhere, some of the season's glories are provided by changing foliage. A fall favorite for many is the grove of Ginkgo biloba trees in the Zen Court of the Japanese Garden: Golden branches lift upward against crisp blue skies and lay down a carpet of leaves on the ground below. More ginkgoes can be seen in the newly expanded Chinese Garden; look for peak color in late November and early December. In both the Japanese and Chinese gardens, splashes of color also dapple the Japanese maples (Acer palmatum) and the weeping golden willow trees (Salix x sepulcralis nothovar. chrysocoma) that trail their branches gracefully near the water's edge. 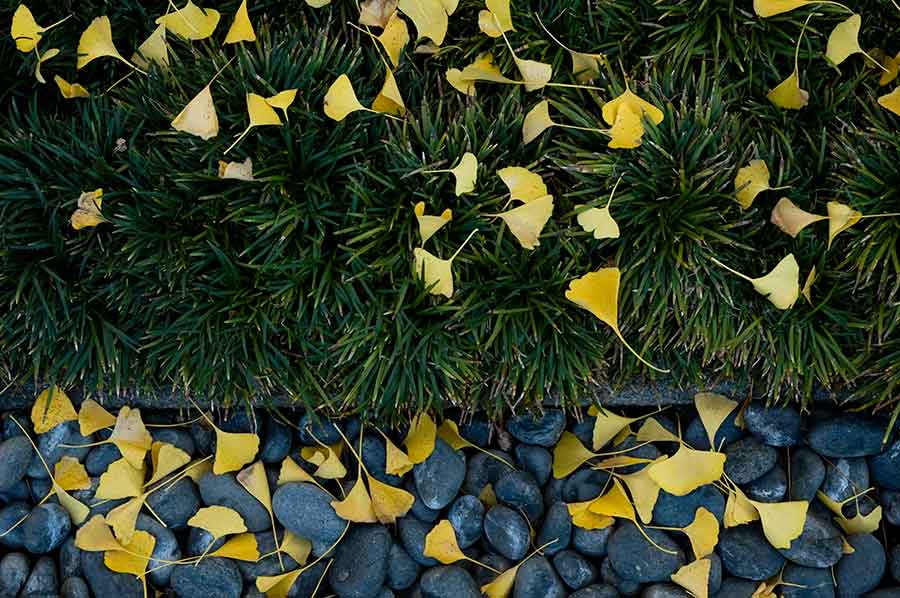 As a tree’s chlorophyll production decreases in the fall, the pigments that give the leaves their autumn colors are revealed. Photo by Lisa Blackburn.

As with all things in the natural world, there’s science behind the beauty. The pigments that give leaves their autumn colors are present in leaves all year long but are masked by green chlorophyll during summer months and revealed only as chlorophyll production decreases in the fall.

“The process of a leaf shutting down in response to declining day length after midsummer is termed leaf senescence,” explains Sean Lahmeyer, conservation and collections manager at The Huntington, who teaches plant biology at Pasadena City College. “This is an orderly process that breaks apart the leaf’s cellular structure, while recovering essential nutrients such as magnesium, phosphorus, amino acids, and sugar. Chlorophyll pigments are also broken down, revealing other pigments, such as yellow xanthophylls, orange carotenoids, and reddish anthocyanins. It is a remarkable process that showcases the genetically programmed aging and death of a leaf.” 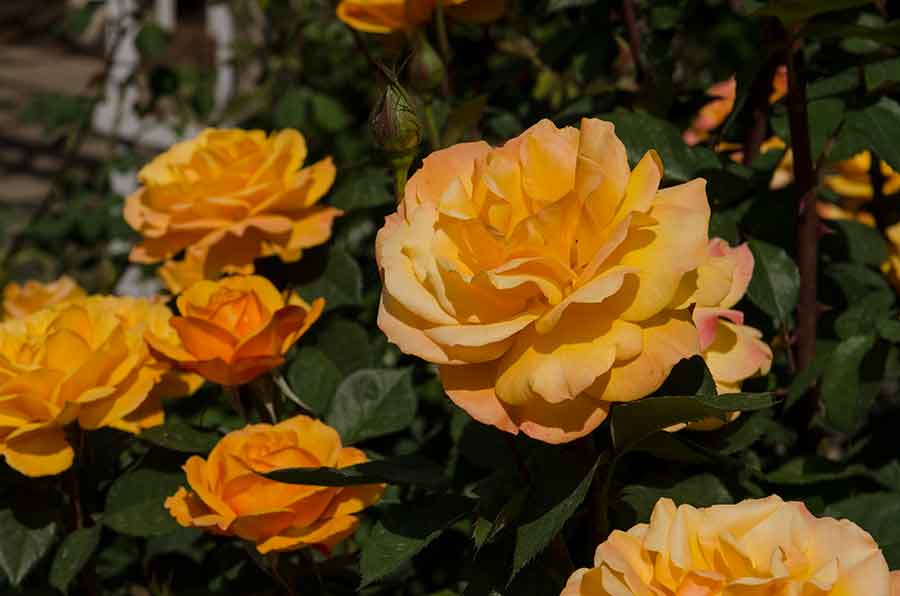 The mellow hues of roses like ‘Good as Gold’ lend touches of fall color to the Rose Garden. Photo by Lisa Blackburn.

But foliage is by no means the end of autumn’s story. Southern California’s mild climate means that flowers are a major seasonal attraction, too. The last roses of the year are still fragrant in the Rose Garden, with cultivars like ‘Redgold’, ‘Thanksgiving’, ‘Good as Gold’, and 'Hot Cocoa' lending warm touches of fall color. Visitors might also spot, mingled among the roses, the harvest-orange Gladiolus dalenii in companion plantings edging some of the beds. Other bright splashes of color in the landscape include the velvety purple plumes of Mexican sage (Salvia leucantha) in the Shakespeare Garden, the crimson flowers of the “Airplane Plant” (Crassula falcata) in the Desert Garden, and the festive red bracts of a large, naturalized poinsettia shrub (Euphorbia pulcherrima) below the south terrace of the Huntington Art Gallery. 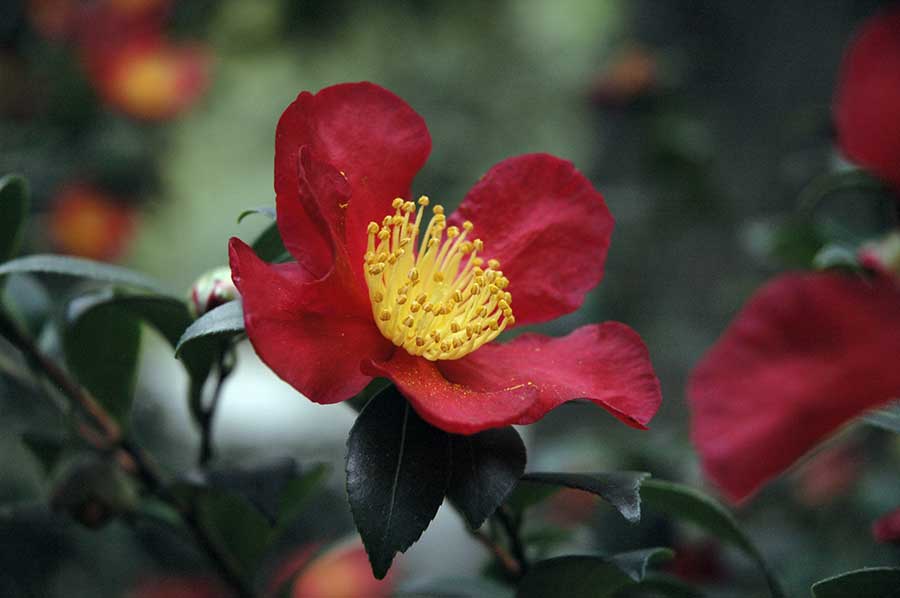 As the year slowly draws to a close, vivid winter colors will begin to dress up the gardens for the holidays. The first camellias of the season make their debut as the days grow cooler, with sasanquas leading the way—among them the festive red cultivar ‘Yuletide’. The long blooming season of the camellia collection extends from November into March; there are some 1,200 varieties of camellias in the Japanese and Chinese gardens and around the North Vista.

In the 10-acre Desert Garden, thousands of aloes herald the approach of the new year with their torch-like inflorescences, or flower clusters, blazing in shades of red, orange, yellow, and white. There are more than 300 different species and hybrids represented—from Aloe alooides to A. zebrina—and their annual bloom is always an impressive sight. 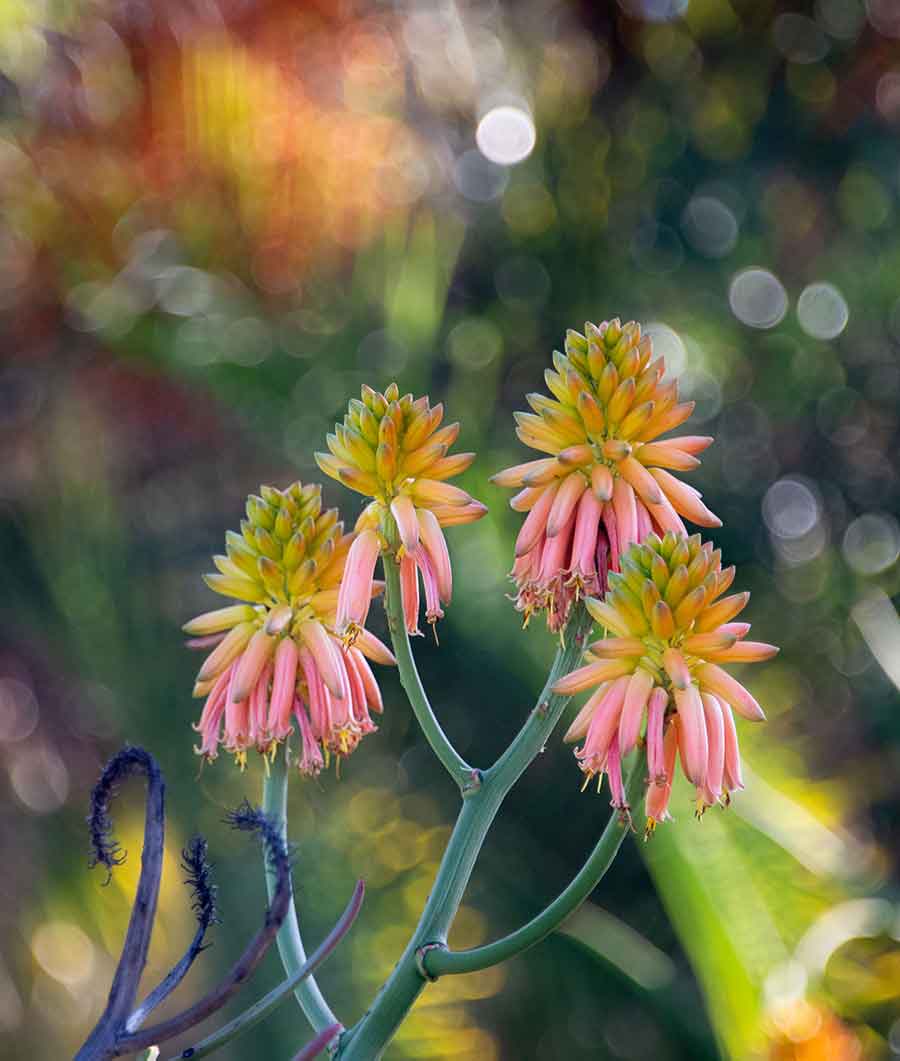 Thousands of aloes in the Desert Garden come into bloom every winter—one of the floral highlights of the year at The Huntington. Pictured, Aloe tongaensis. Photo by Deborah Miller.

Aloes are Old World succulents—originating primarily in South Africa, eastern Africa, and the Arabian Peninsula—but they are right at home here in our Mediterranean climate. One of the most striking aloe displays in the garden can be seen in the Heritage Walk section of the Desert Garden near the bottom of the hill, where masses of red spikes of A. arborescens cover the southeastern slope. Another eye-catching species is A. spectabilis, which produces a multi-branched, candelabra-like inflorescence of yellow and red flowers. Beauty and diversity aside, aloes are a focus of important conservation efforts at The Huntington, including cryopreservation research. 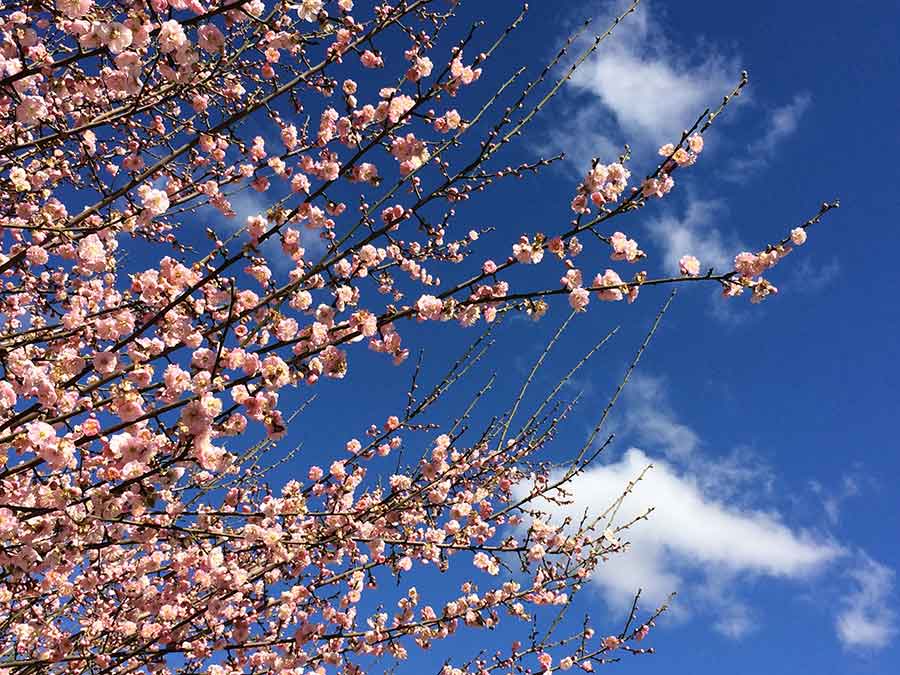 Flowering plum and Japanese apricot trees (Prunus mume) will begin to blossom in January, an early sign that spring is on its way. Photo by Lisa Blackburn.

When the winter days begin to lengthen, the first buds of a new season will start to appear, hinting that spring is just around the corner. Flowering plum and Japanese apricot trees (Prunus mume) are among the earliest arrivals; look for them in the Chinese and Japanese gardens during the month of January, as nature’s glorious lifecycle begins anew.

Thank you, Lisa Blackburn, for such a beautiful and inspiring stroll through the autumn gardens of the Huntington. I hope to see it all for myself this coming week.