A Stunning and Sacred Cape

The exhibition “Visual Voyages: Images of Latin American Nature from Columbus to Darwin” runs from Sept. 16, 2017, to Jan. 8, 2018, in the MaryLou and George Boone Gallery. In this edited excerpt from the introduction to the exhibition catalog, Visual Voyages (Yale University Press, 2017), Daniela Bleichmar, associate professor of art history and history at the University of Southern California and co-curator of the exhibition, focuses on a 17th-century feathered cape created by the Tupinambá people of Brazil. The item is on loan from the Musées Royaux d’Art et d’Histoire of Brussels. Bleichmar discusses how European explorers attached meaning to this object that may have differed from its creator’s intent. 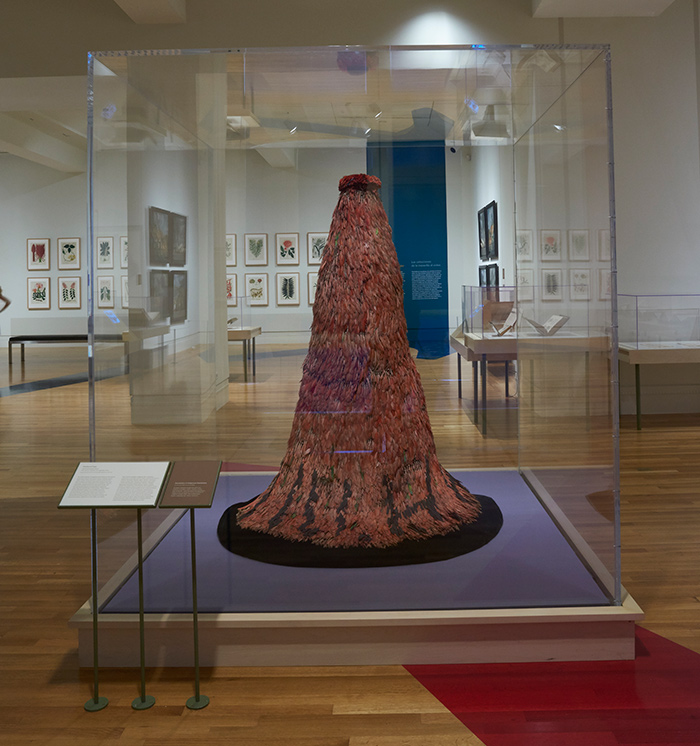 Europeans prized feathered capes like this 17th-century example for their stunning beauty. For the Tupinambá people of Brazil who produced it, the meaning was more profound. Birds were sacred creatures with divine forces. By wearing the cape, a shaman could mediate between the living and the dead. The Huntington Library, Art Collections, and Botanical Gardens.

Sometimes, when walking through the hushed rooms of a museum, you come upon an object that stops you in your tracks. Take, for instance, this stunner: a red cape, six feet tall, made entirely of bird feathers. It is beautiful to behold: big, bright, intricately textured. You come closer, and your eyes widen as you realize that it was made by tying thousands of individual feathers together, one by one, using a fine rope to create a dense yet supple net. A label tersely identifies the object as a “Tupinambá feather cape, Brazil, 17th century” and informs you that it is made of “feathers and vegetable fibers.” Now you grasp that this object is roughly 300 years old and was created by indigenous people in South America. Glad as you are for this information, you notice that the label is much vaguer than those you have seen for Western works, which identify the individual artist by name and also provide the title of the work and the year and city where it was created. 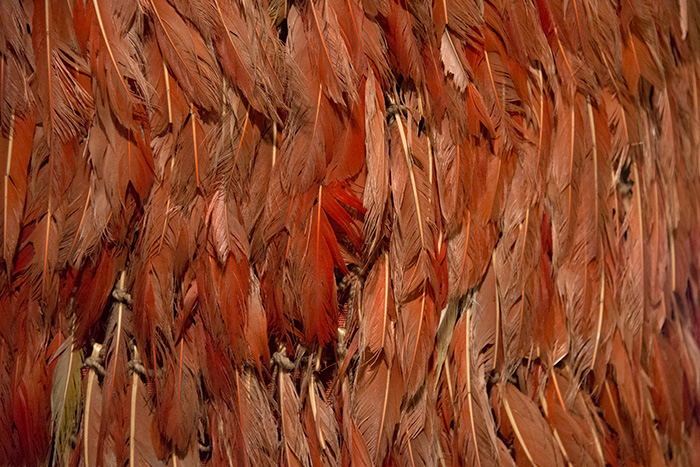 Layers of brightly colored feathers were also used to make hoods, and arm and leg bands.

Only eleven Tupinambá feather capes from the 16th and 17th centuries exist today, and most, unlike this one, have suffered significant physical damage over time. Every single one of these objects is held in a European collection. The capes bring up a host of interesting questions: Why did the Tupinambá make them? How did these people understand these impressive objects? How, when, and why did the capes travel to Europe? And, in what type of institution are they—or should they be—today? In an art museum? An ethnographic museum? A natural history museum? In Europe, or back in Brazil? As it turns out, these capes have long fascinated observers. We do not have testimonies from the Tupinambá who made or wore them in the 16th and 17th centuries, but we do have accounts written by European observers at the time. André Thévet (1516–1590), a French writer who lived briefly in Brazil in the 1550s, wrote: “There are many birds of diverse kinds, with strange feathers, some as red as fine scarlet, others white, ashy, and other colors. And with these feathers the wild men or Indians, make hats, and garments, either for to cover them[selves] or for beauty. [They use them w]hen they go a warfare [sic] or when they have any skirmish with their enemies.” 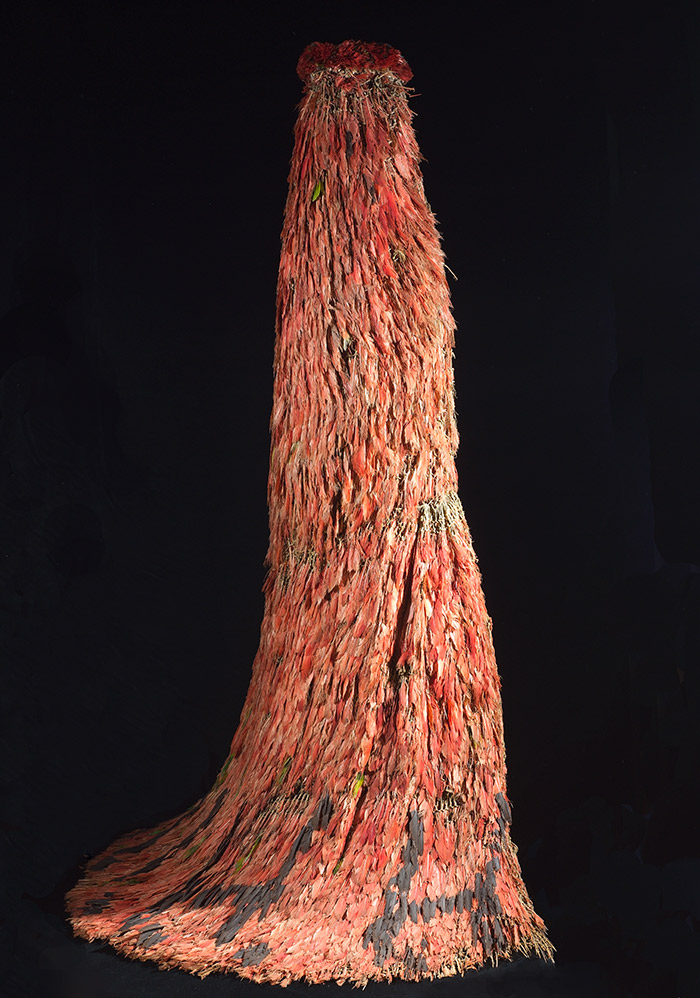 Thévet understood the feather objects within European categories: as luxury garments used for special occasions, such as combat. Feather garments became inextricably linked, in the European imagination, with Native American peoples, though more often seen as signs of primitive culture or “idolatry”—the word that Europeans used for native religion—than of magnificence. According to modern ethnohistorians and anthropologists, the Tupinambá did not understand feather capes and caps primarily as luxury items used to denote rank or privilege, as Europeans did. Nor did they consider them according to the European category of “works of art.” Rather, the Tupinambá approached feather garments within the context of religion or shamanism. They thought of birds as sacred beings that could incarnate divine forces and also mediate between the living and the dead, the material and the immaterial. When shamans wore feather garments for ritual occasions, they were not simply putting on a beautiful costume: they were transforming themselves into birdlike creatures that, through dance and song, invoked powerful forces. 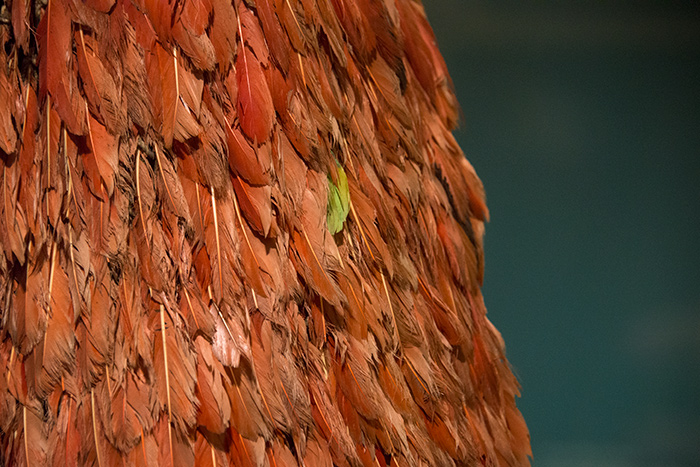 Most of our knowledge about 16th and 17th century Tupinambá feathered capes comes from accounts written by European observers, not the Tupinambá people themselves.

The value of the feather cape resided not primarily in its manufacture and aesthetic qualities, impressive as both were, but rather in its material (feathers) and ritual use. The Tupinambá feather cape is thus much more than a strikingly beautiful object. It allows us to consider questions related to craftsmanship and technique, the intertwined histories of Native Americans and Europeans, the relationships between humans and animals, and much more. The cape is a time traveler. And it is also an invitation for us to explore, to go on an aesthetic, intellectual, and cultural voyage to try to understand how people at that time and place interacted with the natural world and made meaning of it and of each other. “Visual Voyages: Images of Latin American Nature from Columbus to Darwin” is a sweeping international loan exhibition that explores how the depiction of Latin American nature contributed to art and science between the late 1400s and the mid-1800s. It features more than 150 paintings, rare books, illustrated manuscripts, prints, and drawings from The Huntington’s holdings as well as from dozens of other collections. Many of these works are on view in the United States for the first time. The catalog, Visual Voyages: Images of Latin American Nature from Columbus to Darwin (Yale University Press, 2017), is available at the Huntington Store. Daniela Bleichmar is associate professor of art history and history at the University of Southern California.

Magnificent cloak and an interesting article. Thank you. It called to mind a piece I read years ago about the Aztecs and their capes made from hummingbird skins, worn by their royalty and warriors.