Alex Israel in the House 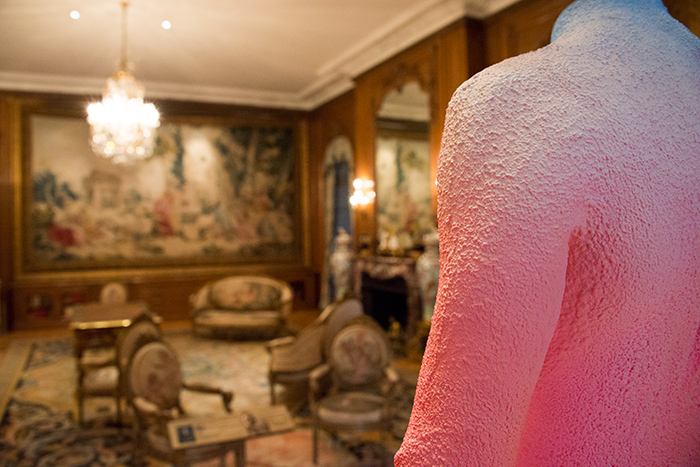 Alex Israel’s Self-Portrait (Wetsuit) stands directly across from The Fountain of Love, one of the 18th-century French tapestries in the Large Library of the Huntington Art Gallery. Photo by Kate Lain.

“What,” you might ask, “is the work of contemporary artist Alex Israel doing in the Huntington Art Gallery, infiltrating the grand interiors of Henry and Arabella Huntington’s former residence and supplanting beloved 18th-century artwork?” Looking at familiar things in a new way is often illuminating, revealing, thought provoking. And smart juxtapositions of contemporary and Old Master art can make us think more deeply about both.

Israel, who lives and works in Los Angeles—where he was born in 1982—is clearly enraptured with sunshine, glamour, Hollywood, and Southern California. Henry Huntington was also enraptured with this region, selecting it to realize his land-development dreams. And constructing a huge Beaux Arts mansion in the middle of San Gabriel ranchland in 1910 was as much of an incongruous visual statement as placing an enormous sunglass lens against a gallery wall in the same mansion in 2015. (That lens, by the way, is a luscious, gleaming piece of abstract sculpture, not to be missed.) 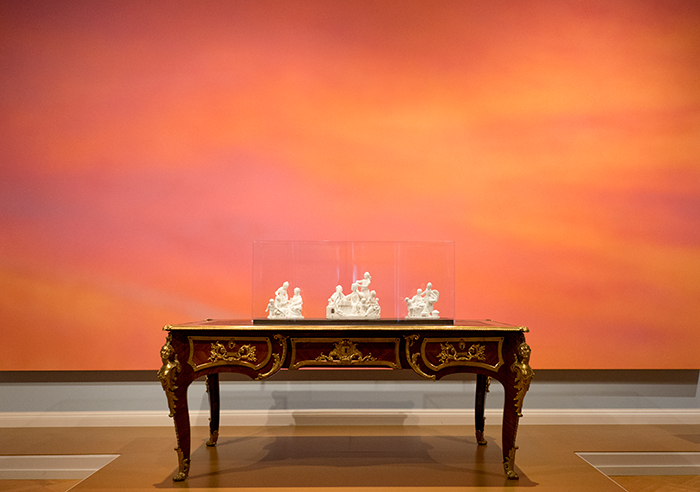 Contemporary art might seem foreign in the mansion but, lest we forget, just after 1900, 18th-century British art was foreign to San Marino, as were the Mexican and Canary Island palm trees intentionally cultivated here for their ornamental qualities and the film industry transferred from New Jersey to Southern California to dodge patent battles.

Celebrity—his own and that of others—is another central concern of Israel’s. Just outside the Thornton Portrait Gallery, an image of Israel taking an image of himself painted on an image of his profile is perhaps the most layered and playful of his conceits. And while Henry and Arabella shunned the public eye, their acquisitions of Grand Manner portraits—just think of the hullaballoo surrounding their purchase of Blue Boy—conferred celebrity status upon them as cultured and discerning collectors. 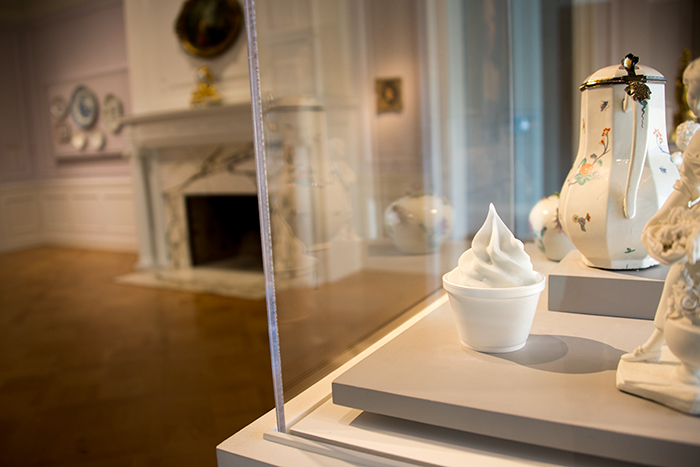 Alex Israel’s The Bigg Chill sits among a selection of French faience pieces in an upstairs room. Photo by Kate Lain.

Perhaps the most fun comes from discovering a painting or sculpture by Israel hiding in plain sight among the mansion’s artwork. Rather than going on a scavenger hunt for his items, try exploring a gallery and doing a double take: “Wait, is that a Renaissance bronze or the Maltese Falcon? Is that a piece of French faience or a cup of frozen yogurt?”

It’s a nifty trick to have the contemporary and Old Master material actually enhance each other. Alex Israel’s Sky Backdrop never looked better than as a luminous stage set for groupings of Sèvres biscuit porcelain figures. Jean-Antoine Houdon’s life-size bronze of Diananever looked better than with a cartoon-like “Pow!” star behind her, functioning like an exclamation point to drive home that the goddess of the hunt was indeed an action hero.

What other revealing juxtapositions await your discovery? Come to the mansion and find out. 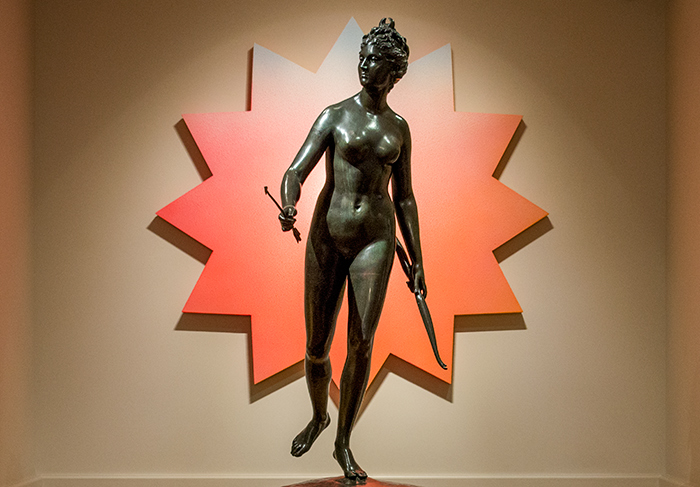 Catherine Hess is chief curator of European art at The Huntington.

Hi, Diane. I'm sorry to hear this isn't your kind of exhibit. I hope you'll continue to enjoy the aspects of the art collections, gardens, and library exhibitions that do strike your fancy.

Execrable exhibit. We have to look at it for 7 months!! Whoever thought of creating this exhibit should go work at Disneyland. I despair for the future of the Huntington. Henry is probably turning in his grave. With his back towards his beloved house.

This is a hideous exhibit. I'm not sure it is worthy of display anywhere but certainly not in the Huntington Gallery. One can only hope that no money changed hands in the process and that it will only be there for a short period of time. It was thought provoking in the sense of how anyone could think of it as art worthy of the Huntington collection.

Hi, Tony. Thanks for reading, and sorry to hear this installation isn’t going to be up your alley. Responses to works of art sure do vary from person to person, don’t they? Hopefully you’ll continue to enjoy the works from our permanent collection for the duration of this temporary installation!

I think not that long ago people believed the earth was flat as well!

I have to say this is one of my favorite exhibits I have ever seen! It was as if I had been asleep for years and I awoke to a beautiful dream as I walked thru the gallery. Bravo Huntington for stepping up and giving the world this exhibit.

Thought-provoking, no. Sophomoric, yes. It simply looks like the result of an over-caffeinated mall window dresser trying to be 'clever'.

Hi, Genevieve. Well at least it’s reaction-provoking, eh? :-) I do encourage you to come check it out in person if you’re in the area — the photos might be a bit reductive, and happening upon these works as you make your way through the mansion might give you quite a different impression.

Although I have not yet viewed these new installations in person, i love the photos and concept; especially the little Big Chill.

Hi, Suzanne. I hope you’ll be able to come check it out in person! That little marble/styrofoam frozen yogurt sitting with the French faience is quite a delightful combo, isn’t it? And just around the corner from that is my current personal favorite spot in the intervention—a room filled with a site-specific garden-themed mural.