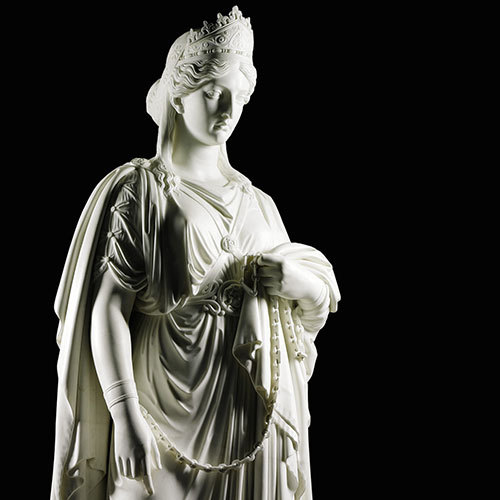 Harriet Hosmer portrayed Zenobia, a 3rd-century queen of Palmyra (near present-day Syria), as a prisoner of the Roman Empire. Although defeated, the queen possesses a regal bearing and wears an elaborate court dress, complete with a diadem. Only the chain and the slight downward tilt of her head betray her status. Zenobia's stoic mien is modeled upon the figures portrayed in ancient Greek sculptures, who remain expressionless regardless of pain or distress. In the legend, when Emperor Aurelian saw Zenobia's dignity and beauty while shackled, he freed her. Hosmer conveyed the exact qualities that led to Zenobia's pardon.

Hosmer carved Zenobia in 1859 and exhibited it in 1862 at the Great London Exposition, where Chauncey Butler Ives's Pandora and work by William Wetmore Story were also on view. Some male critics doubted that Hosmer, a woman, had the skill to make such a monumental work, but her fellow American sculptors in Rome, notably Story, avered in the press that it was entirely by Hosmer