The Allure of Aroids 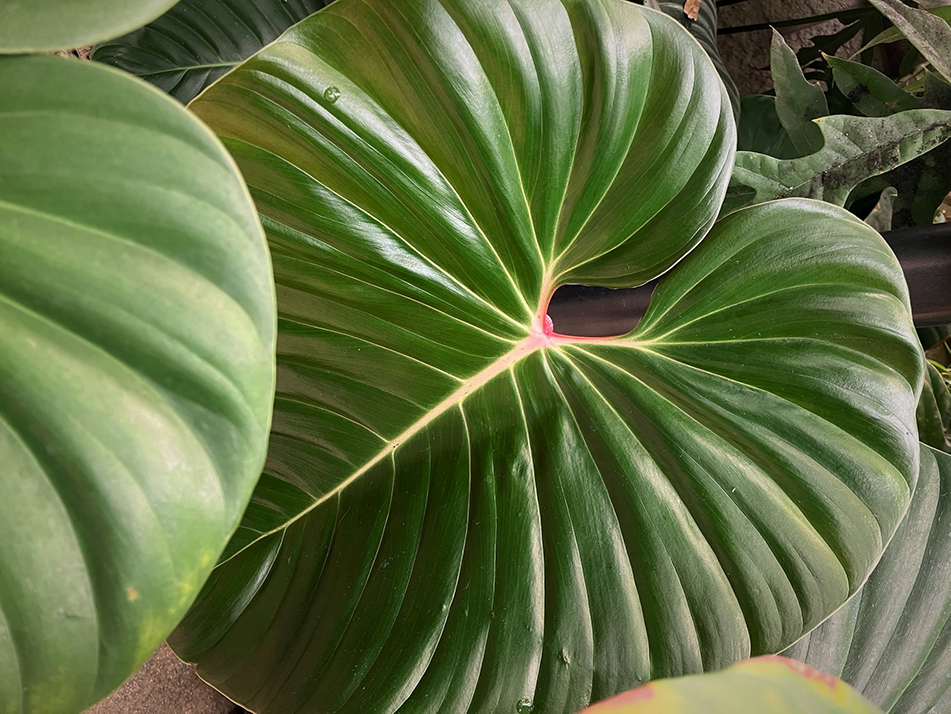 Although all aroids flower, their striking foliage is the main attraction for many people. Philodendron “lynamii” is a provisional name for a potentially new species from Peru. The glossy leaves are bright pink when they first form and gradually turn a rich green color. Photo by Sandy Masuo.

When you step into The Rose Hills Foundation Conservatory for Botanical Science at The Huntington, you are instantly transported to another world. Consistently warm and humid conditions create a pocket of the tropics that houses a grand display of plant adaptations. Among the more dazzling denizens are the foliage-forward aroids, a term for plants in the Araceae (or arum) family, which includes such beloved houseplant genera as Monstera, Philodendron, Pothos, and Anthurium. It also includes Amorphophallus, the genus of the notoriously smelly Titan Arum, better known as the Corpse Flower. Although the Titan Arum tends to take center stage during its flowering season, the Conservatory is a year-round trove of aroid diversity.

Philodendron luxurians (left) and P. callosum (right) are both terrestrial species. The contrasting features of their leaves are the result of different light conditions in their respective habitats. Photo by Sandy Masuo.

“The titanum overshadows just about everything when it blooms, and that’s OK,” acknowledged Dylan Hannon, curator of the Conservatory and Tropical Collections. “The Titan Arum is iconic, the botanical equivalent of The Blue Boy portrait by Gainsborough. Amorphophallus is one of the specialized groups that we have within our aroid collections. In recent years, when the Titan bloomed, I put a dozen or more different species of Amorphophallus on display at the same time. They’re very diverse in colors, patterns, shapes, and sizes. You could call aroids the most significant plant group that we have in the Tropical Collections as far as scientific work is concerned. We have more than 200 species of anthuriums, close to 100 philodendrons, and at least 100 more species from another 30 genera.”

The Titan Arum is famed for its size and smell, but members of the Amorphophallus genus are tremendously varied in terms of size, shape, color, and scent. A. thaiensis (left) produces blue fruits; A. croatii (center) emits a pleasant odor; and A. juliae (right) is a newly described species from Borneo. Photos by Dylan Hannon.

Most aroids have evolved in habitat that is essentially the opposite of The Huntington’s semi-arid Southwest. The consistently warm and damp conditions of the tropics can easily lead to fungal and bacterial infections, so aroid species display a spectacular array of leaf textures and shapes that repel water and channel it to drip away. In addition to the constant humidity, it can be challenging for them to access the sunlight they need for survival because tropical rainforests are densely populated with plants. Some aroids are epiphytes (plants that grow on another plant but are not parasitic) or semi-epiphytic and spend their lives high above the forest floor, attached to larger plants. Others are vigorous vines that climb upward to find light. Many have evolved massive leaves; some can reach 6 feet or more in length. These living solar panels often grow at angles that allow them to capture sunbeams that penetrate the forest canopy from any direction. 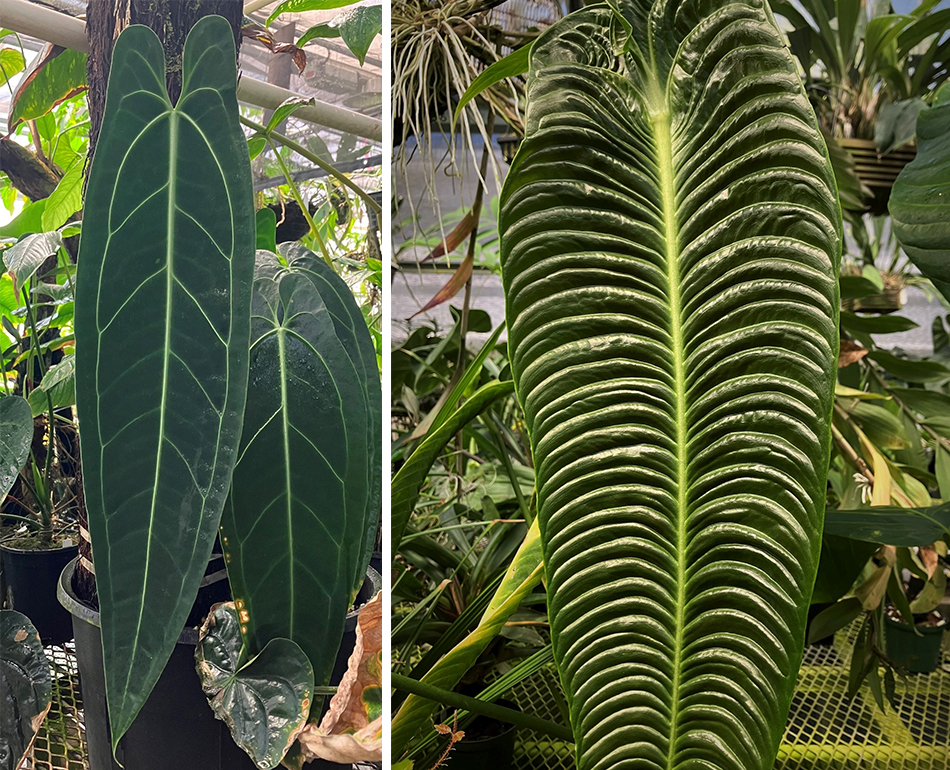 Many aroids are also shape-shifters that can change dramatically over the course of their lives. “Pothos” (Epipremnum aureum) is one of the most common houseplants in the world; in a domestic setting, it retains its petite juvenile features. Few people would recognize the massive adult form, which is a vine that can climb more than 60 feet in height with leaves that are 2 1/2 feet long. Even individual aroids of the same species can vary tremendously depending on the conditions in which they are growing. This important adaptation enables the plants to respond quickly to the dynamic environmental conditions of the rainforest. 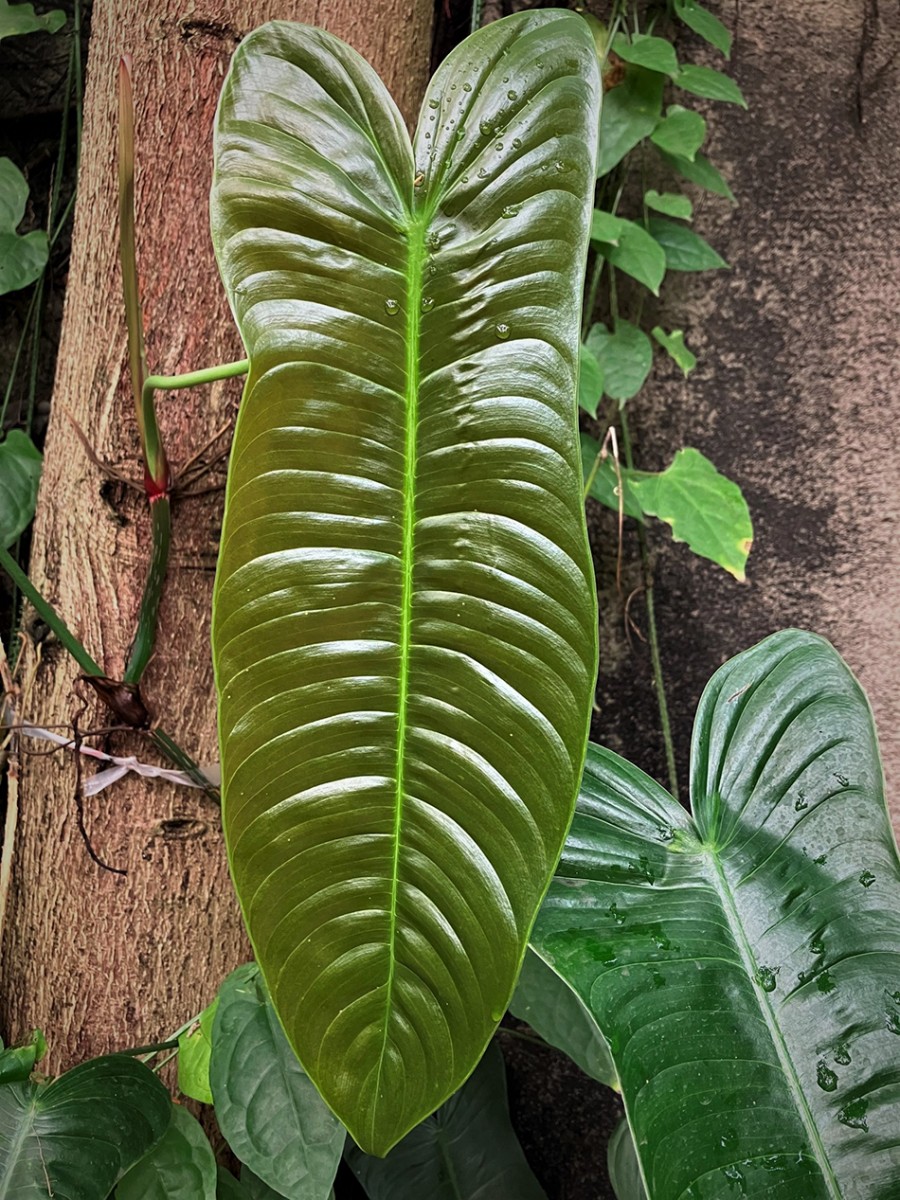 Philodendron gardeniodorum is a species that was described, based on a Huntington specimen, as new to science in 2016. The adult plant outgrew its space, and this juvenile will hopefully transition to the adult phase in a few years. It is native to Ecuador. Photo by Sandy Masuo.

Several aroids from The Huntington’s collections are scientifically significant. In 2012, some 30 species of Anthurium and Philodendron at The Huntington were identified as being new to science. Other specimens for which there exists locality data—where, when, and by whom a plant was collected—can be useful for conservation research. 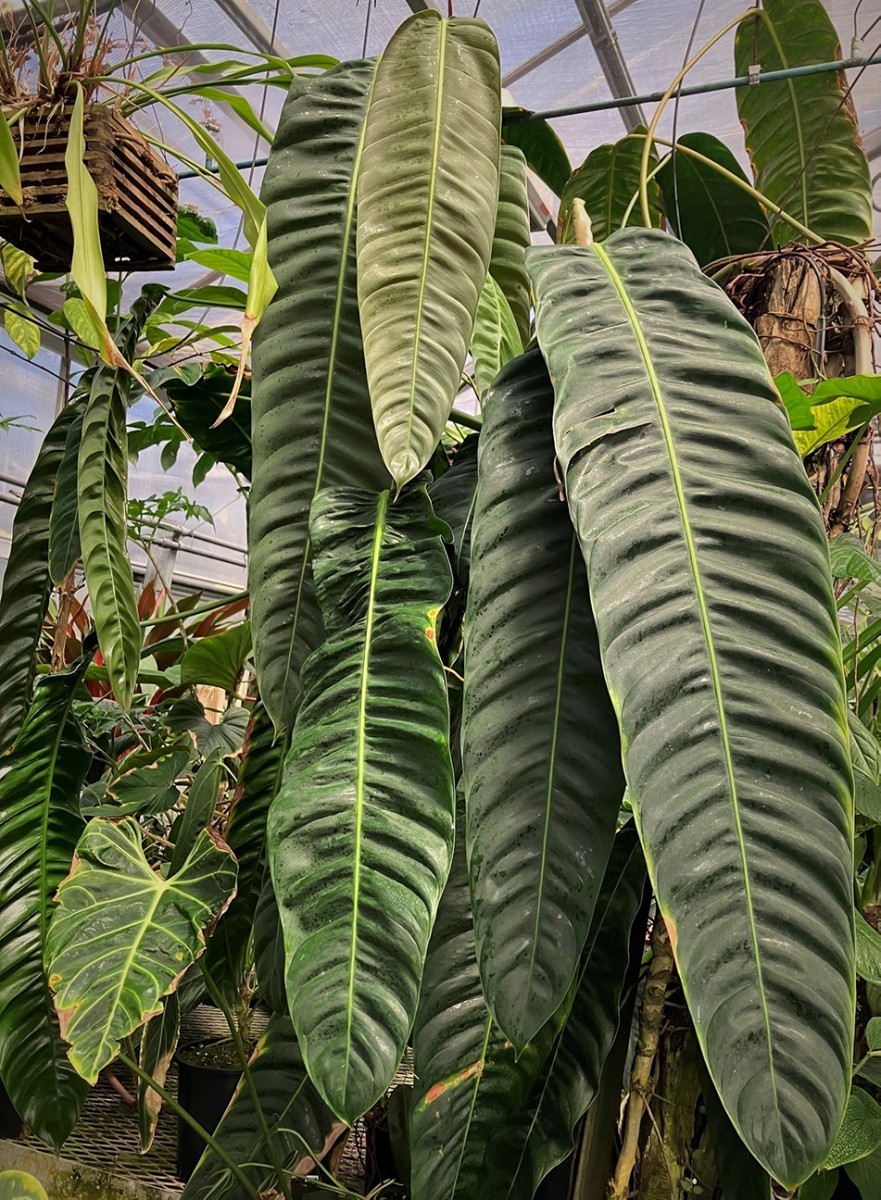 Native to the Chocó region of Colombia, the dazzling Philodendron patriciae produces leaves that can exceed 4 feet in length and are almost a foot wide. Dylan Hannon, The Huntington’s curator of the Conservatory and Tropical Collections, was the first to grow this species in cultivation from seed. Photo by Sandy Masuo.

Yet as significant as these plants are to The Huntington’s education, conservation, and scientific goals, their aesthetic appeal is at the heart of their popularity with the public. For many people, the beauty of aroids is primarily a sensory experience.

“I almost don’t want to break that spell. You should enjoy them,” Hannon said. “But if people can take away a little additional information and discover that plants have stories and history, then that’s something we should encourage. In the last couple of years, we’ve added new signage that tells a bit about plants that have some notable feature. Contextualizing beautiful things makes enjoying them a richer experience.” 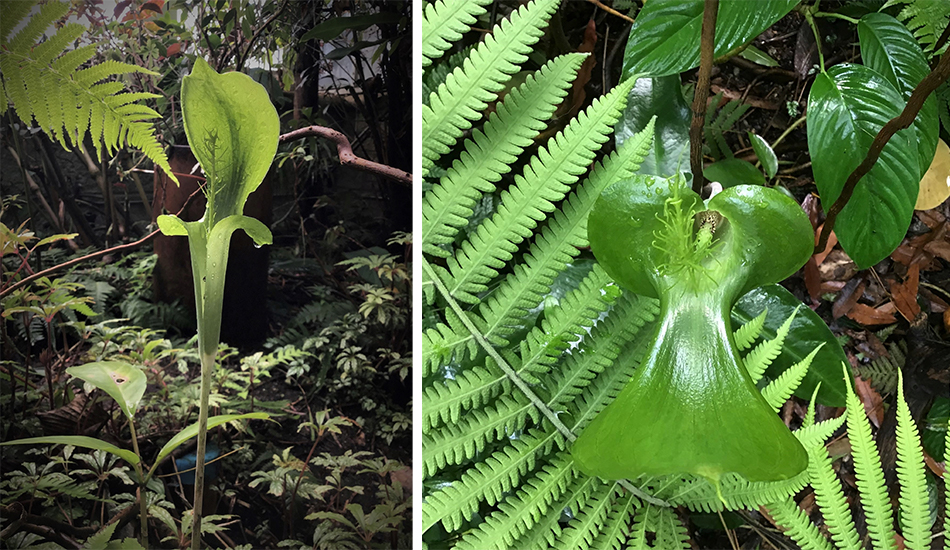 The aroid genus Arisaema includes some 200 species commonly known as Jack-in-the-Pulpits. A. balansae is native to northern Vietnam and produces beautiful green inflorescences that share the same basic structure as all aroids—a central spadix wrapped in a spathe. Photo by Sandy Masuo.