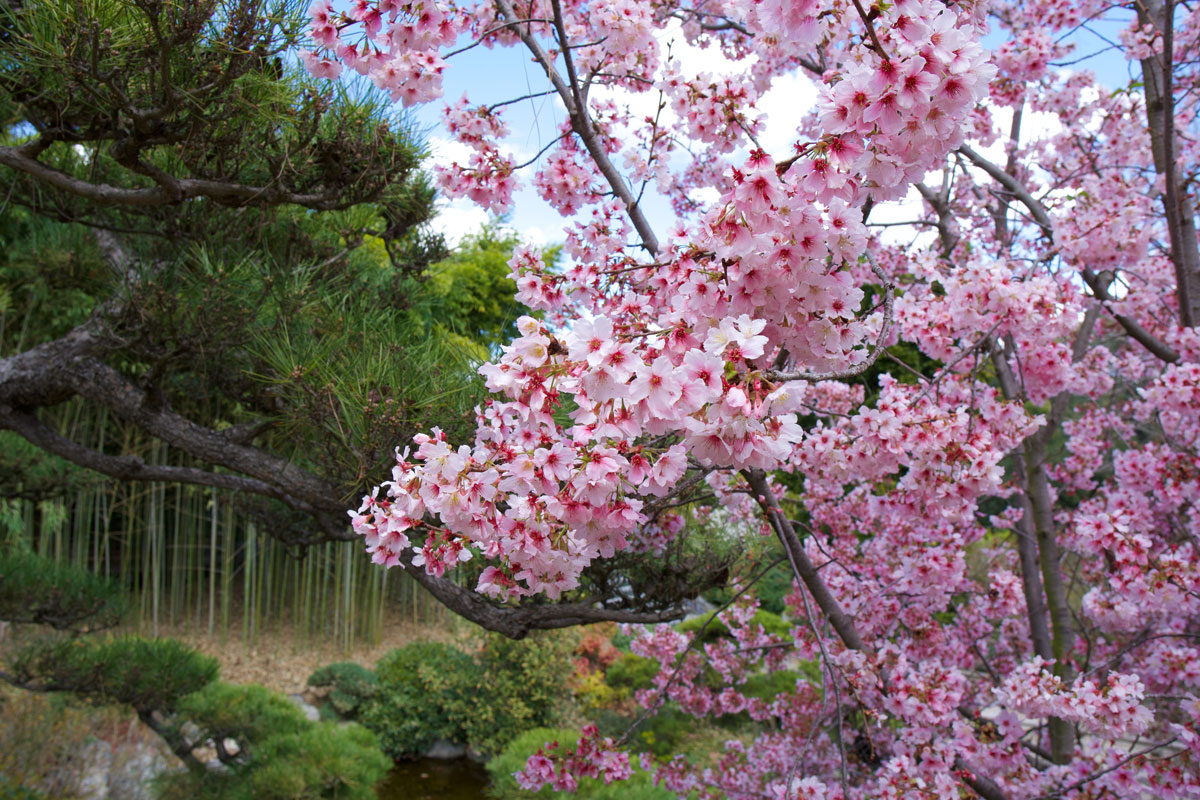 The ornamental cherry is a signature plant in the Japanese Garden. Among the many cultivated varieties (cultivars) that have been developed, this one, Prunus serrulata ‘Pink Cloud’, originated at The Huntington. Photo by Arianna Muñoz.

At this time of year, flowering fruit trees are in the spotlight for their showy displays of pink blossoms, but there is a lot of competition throughout The Huntington’s gardens. Although many trees share the pink color palette, if you look closely, you’ll see that each one is distinctive. 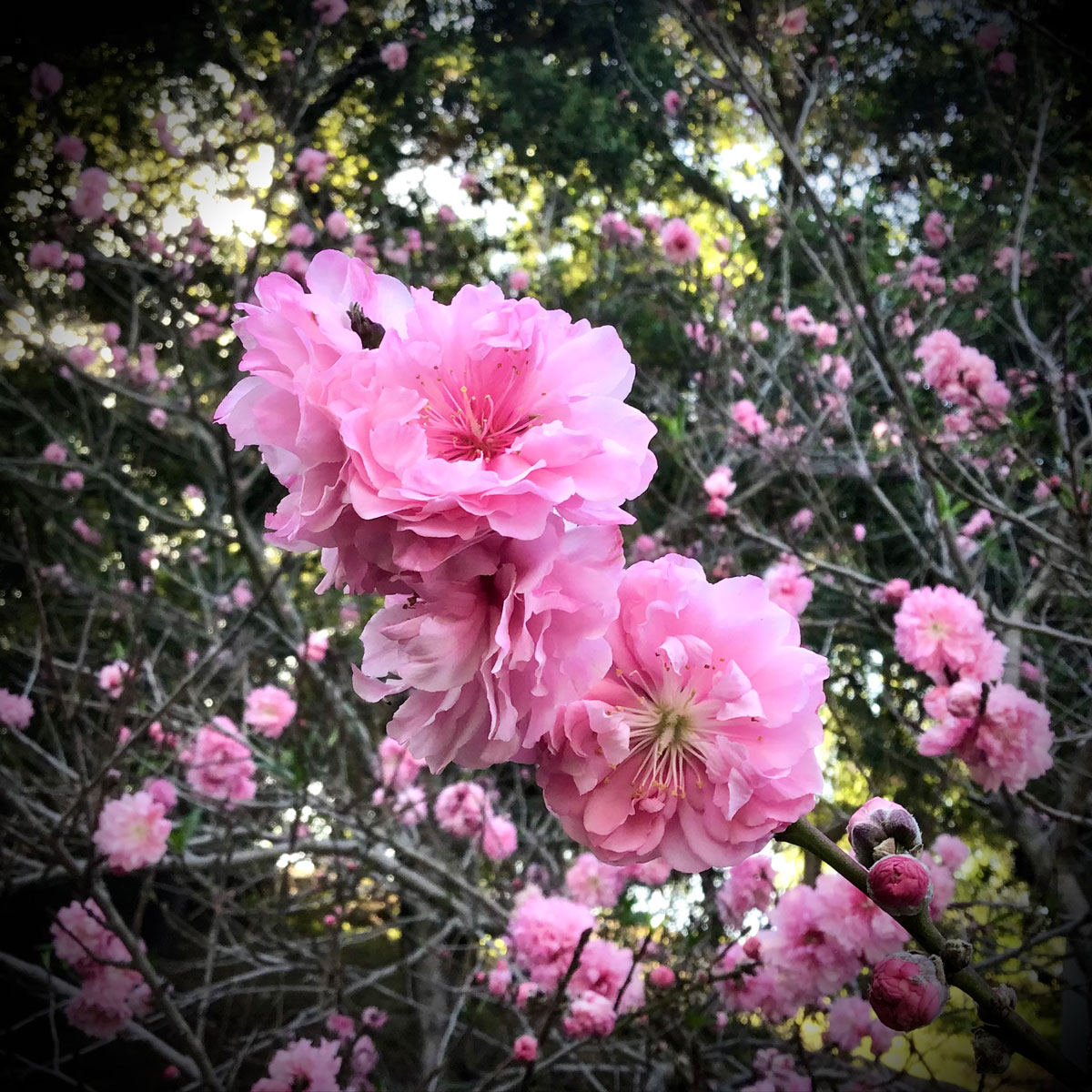 Flowering peach (Prunus persica) is a cousin of the popular ornamental cherry. This and other stone fruits are part of the Rosaceae family, and their flowers do indeed resemble tiny roses. Over the centuries, people have selected and cultivated varieties of cherry, plum, apricot, peach, and almond specifically for their flowers rather than their fruit. Plants in this genus are found in northern temperate regions around the world. This cultivar, ‘Helen Borchers’, is now blooming in the Chinese Garden. 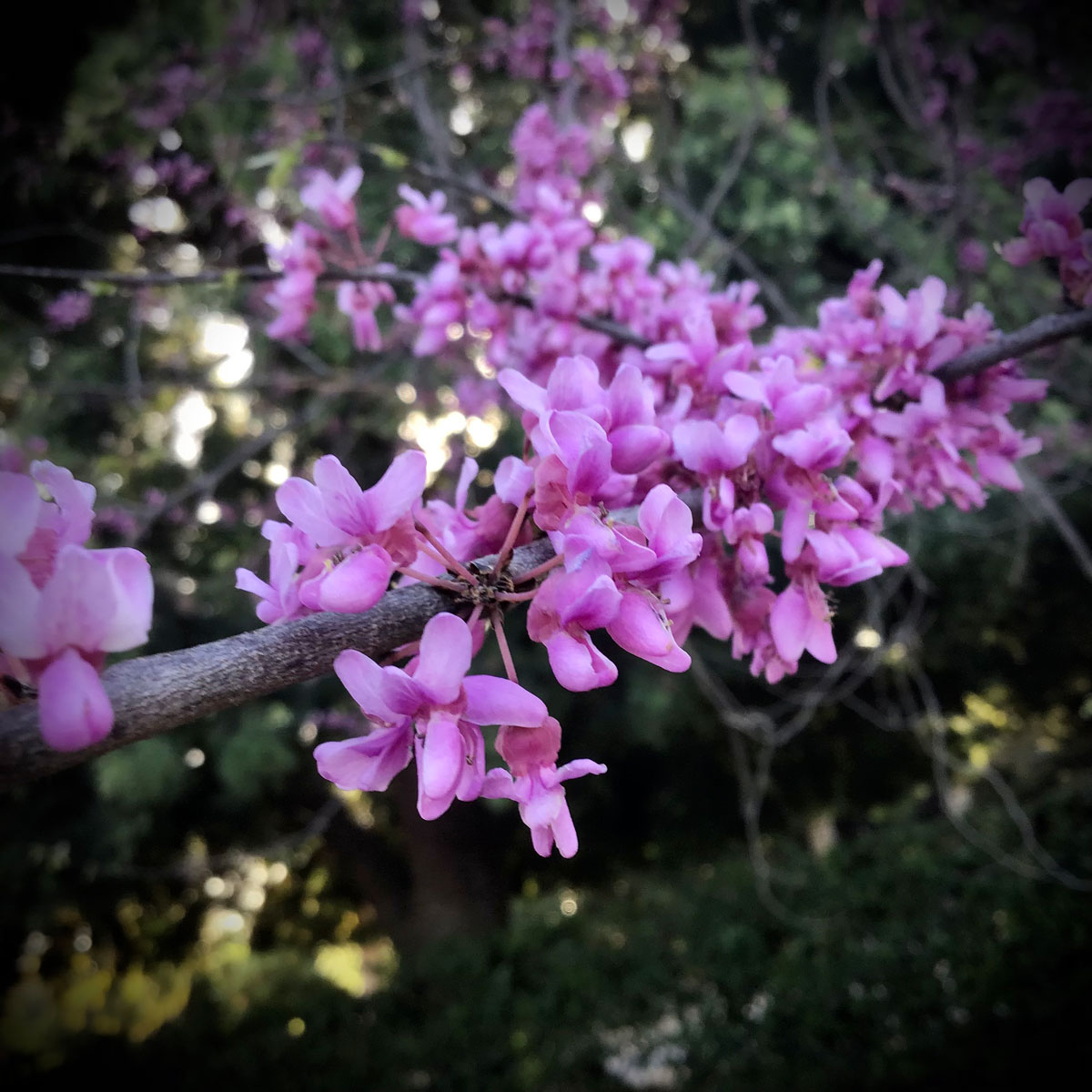 Cercis is a genus of about 10 species, including our native western redbud (C. occidentalis). Like the flowering stone fruit, these small trees produce a profusion of pink blooms just before the leaves emerge. Redbuds belong to the pea family (Fabaceae), and if you look closely at their flowers, you can see the resemblance to sweet peas. As an added bonus, when they have finished flowering, redbud trees erupt in attractive heart-shaped leaves. They also produce long seed pods, like their fabaceous cousins. This eastern redbud (C. canadensis) is in bloom along the Allen Avenue exit in the parking lot. 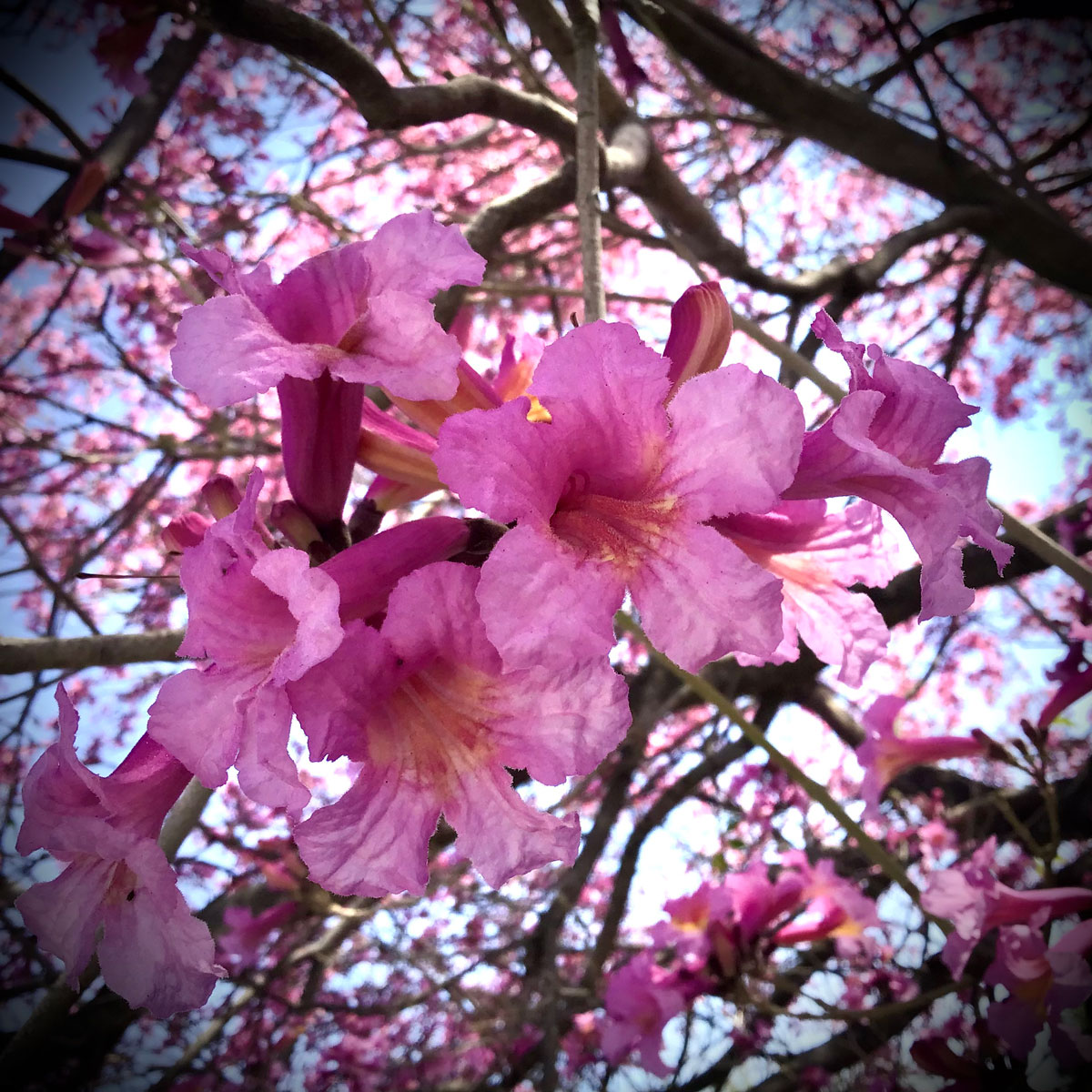 Trumpet trees (Tabebuia) are native to the West Indies and Central and South America. In spring they produce masses of trumpet-shaped flowers in pink or golden yellow. These members of the bignonia family are growing in popularity as street trees. In addition to the many spectacular specimens on the Huntington grounds—including this T. heptaphylla in the parking lot—you may spot them along several streets in Pasadena and other municipalities. 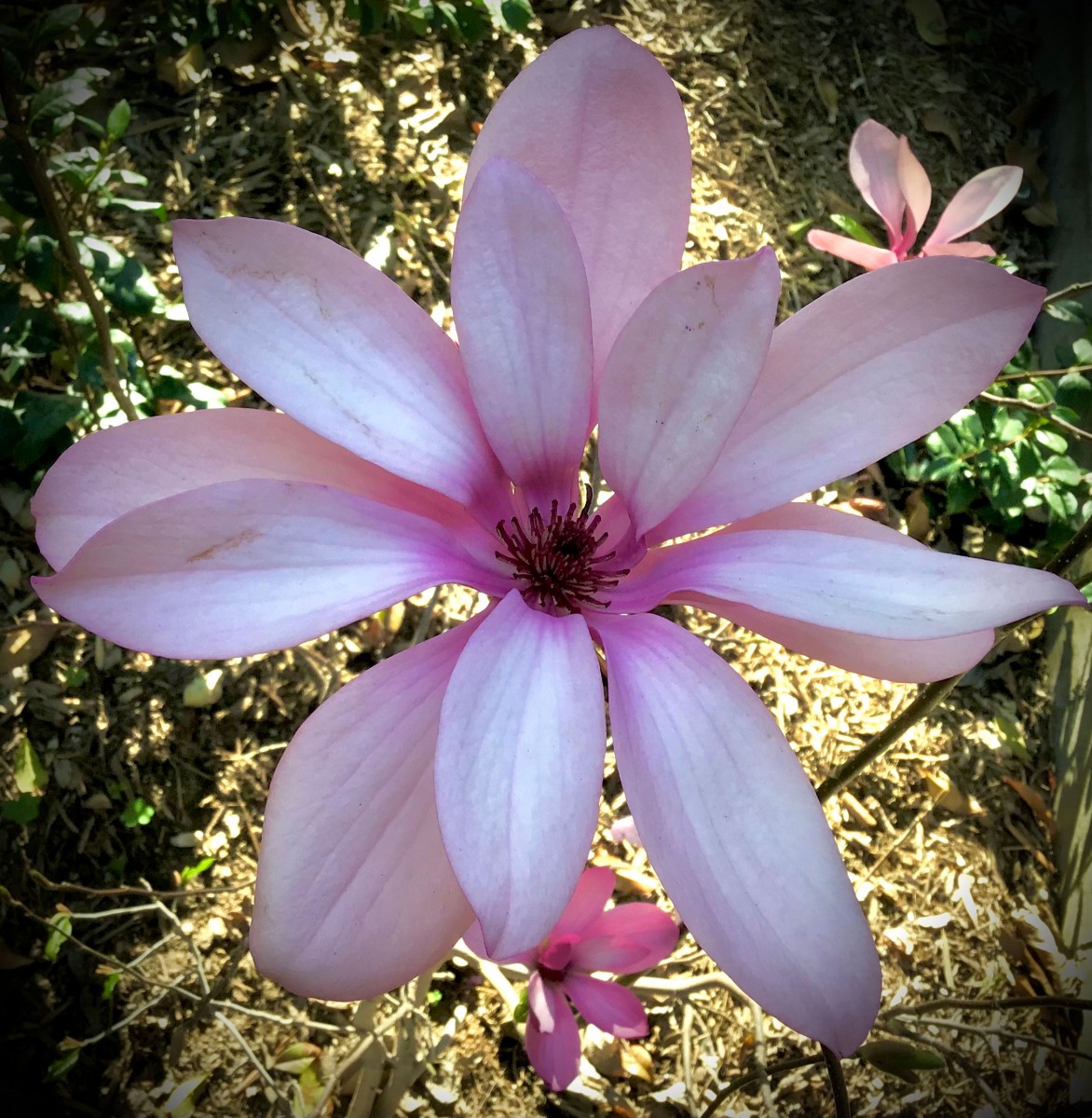 Magnolia is an ancient genus of about 200 species, and it is the focus of some of The Huntington’s most important botanical conservation work. It is also a vibrant element throughout the gardens. Star magnolias (M. stellata) produce fragrant flowers that range from white to shades of pink. Native to Japan, this is one of the smallest species in the genus.

What is your favorite vision in pink?

Sandy Masuo is the senior writer in the Office of Communications and Marketing.

Sandy - these are GORGEOUS captures - thank you.

Thank you so much, Catherine! I was glad to capture a bit of spring to share.

What a gorgeous array of pinks. I never thought about how some fruit trees blossom before the leaves arrive. But of course, that’s why the color stands out so vividly.

Exactly! The redbud is like a double whammy because it makes lovely foliage as well. There are even cultivars that produce red leaves.

Beautiful pictures! Thanks for sharing.

Thanks, Susan! I’m glad you enjoyed them.

I’ve always wondered what the pink trumpet tree was called. When in full bloom are there no leaves?

Yes! Some trees produce flowers before they leaf out. This attrracts more pollinators... and makes for a beautiful display for us.

Ahhhh..... fruit trees are multi-talented. They give us something beautiful to see in the spring, and fruits that are delicious to eat in the summer also!

True! Although many ornamental fruit trees have been bred by humans mainly for their flowers so they often have small or unpalatable fruits. I once sampled a tiny fruit from an ornamental pear tree in a friend's garden and was surprised to find that it did taste essentially pear-like but was about the size of an M&M.