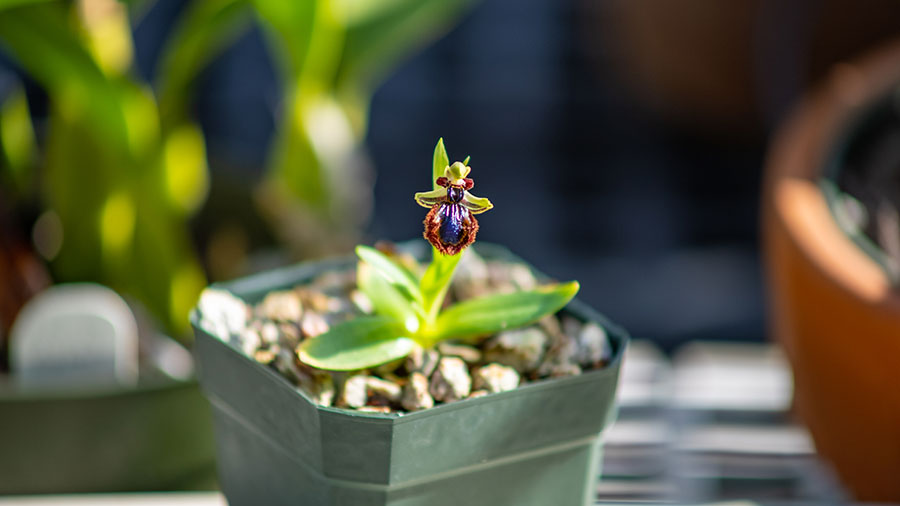 The shiny, metallic patch on this bee orchid (Ophrys speculum) mimics the gleaming abdomen of a female bee. It is commonly known as the mirror orchid. Photo by Aric Allen.

Roses are red, and violets are blue.
Orchids are liars? Sometimes, that’s true!

The story of pollination seems pretty basic: Plants provide incentives—most often sustenance in the form of nectar and pollen—to entice various animals to transport pollen from flower to flower. This fertilization enables plants to set seed and produce offspring. But the behaviors surrounding this simple transaction can be very complex and, in some cases, involve sophisticated sexual subterfuge. 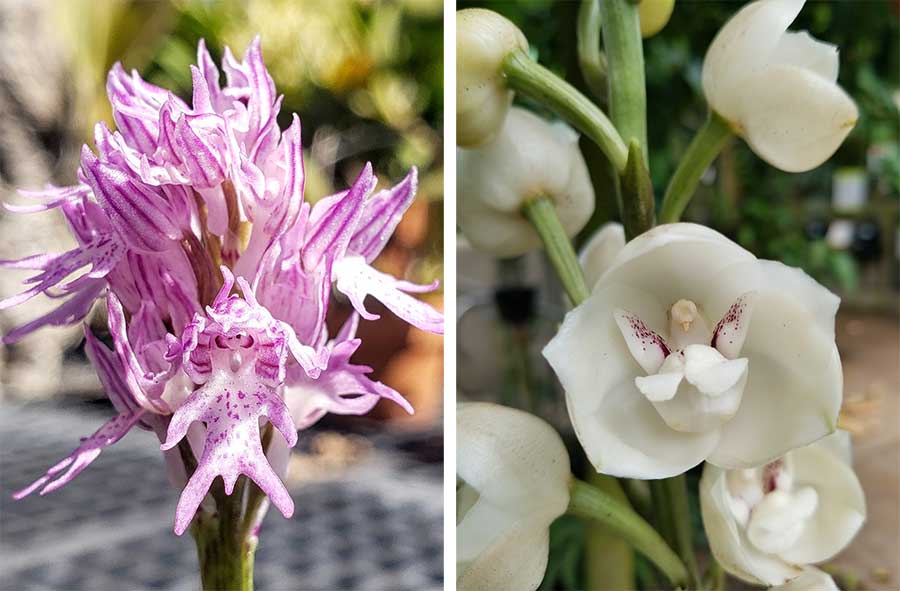 Left: Orchis italica is found in coastal areas of the Mediterranean from Israel to Spain. The anthropomorphic shape of the lower lip of its flowers inspires the common name, naked man orchid. Right: The blooms of Peristeria elata do indeed resemble the birds that inspire the species common name, dove orchid. It is found in shaded grassland edges and stone outcrops in the tropical forests of Central and South America. Photos by Brandon Tam.

Orchids constitute one of the largest flowering plant families on Earth, and they have fascinated humans for centuries. Many delight us with breathtakingly beautiful blooms, while others appeal to our sense of whimsy with flowers that coincidentally look like a curious array of items, from doves and swaddled babies to naked men, dancing ladies, and vampires. But one group of orchids produces flowers that intentionally resemble insects—to us and to the pollinators that these plants manipulate into helping them reproduce.

Bee orchids range throughout Eurasia and North Africa, and most members of this genus (Ophrys) rely on specific bee species for pollination. (One renegade, O. insectifera, is pollinated by a type of fly.) The plants attract male insects with flowers that have evolved to bear an uncanny likeness to receptive female bees. The lower lips of the flowers are fuzzy and similar in shape and coloring to the abdomens of female bees. Many even have eye spots and structures that suggest legs and antennae. 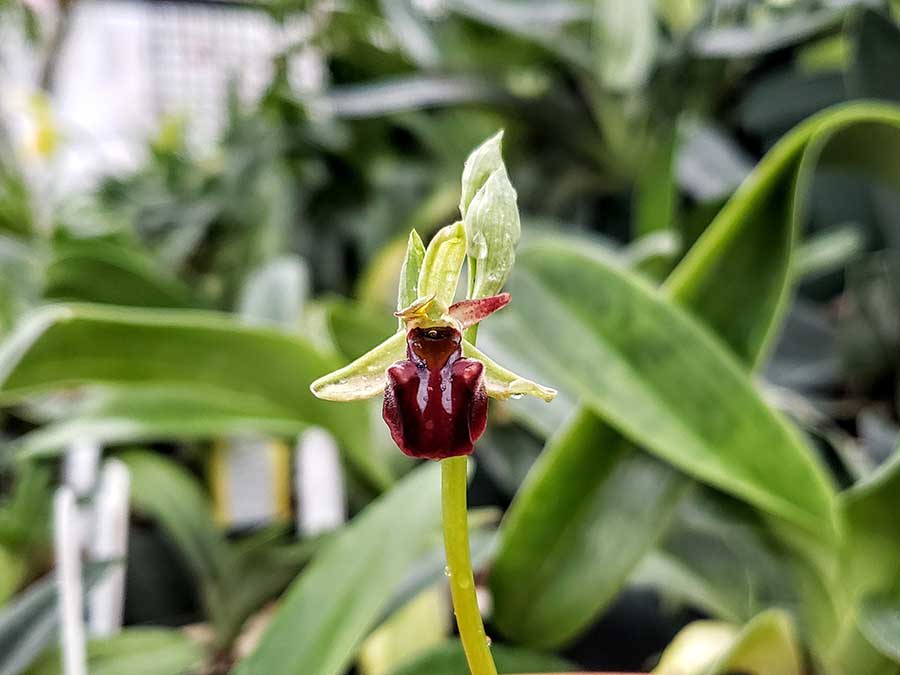 Ophrys bombyliflora is commonly known as the bumblebee orchid. Photo by Brandon Tam.

The mimicry isn’t just visual; the flowers also produce complex scents that imitate the pheromones emitted by the female insects. Ardent males, in a frenzy at the prospect of fulfilling their biological destiny, attempt to mate with what appears to them as a receptive female. While exerting themselves in an effort to couple with the flowers, the pollinia—sticky packets of pollen—adhere to the insects’ heads. Eventually, the bees move on to their next encounter, depositing the pollinia onto the stigma (part of the flowers’ anatomy that leads to the ovary) of another orchid.

What is the advantage of these intimate, single-pollinator relationships? It’s a question of biological economics: targeted advertising versus mass marketing. 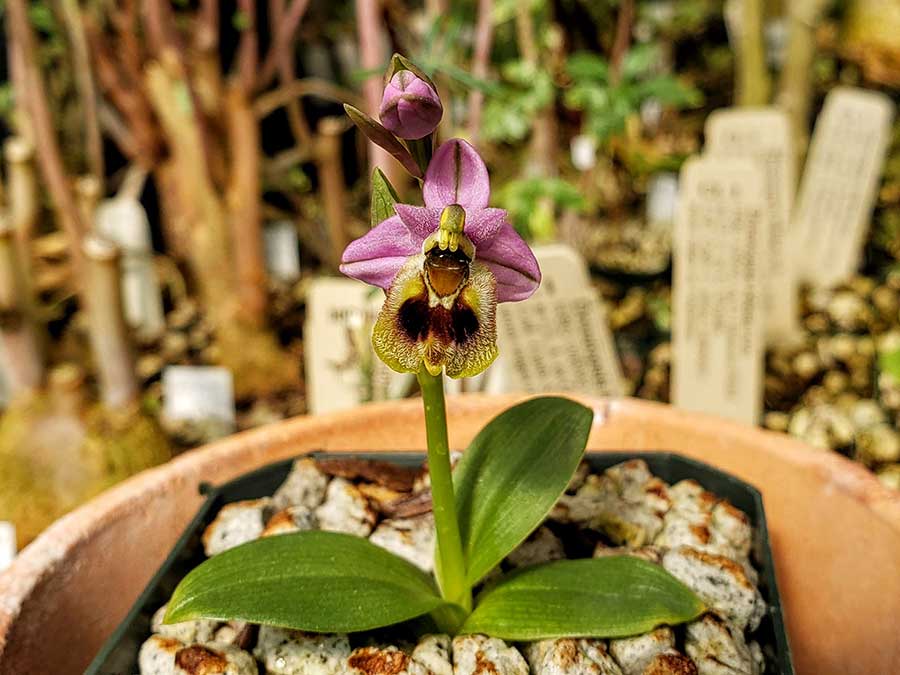 Because pollen and nectar are calorie- and nutrient-rich, they are metabolically expensive for a plant to produce. Pollen, which contains the male reproductive cells, is an important source of protein and fat, while the sugars in nectar provide energy as well as other nutrients. Plants that are generalists, with flowers that draw a wide range of pollinators, must produce large quantities of pollen in order to ensure that a portion of it reaches other plants of the same species. Generally, they also offer nectar to lure pollinators to visit. 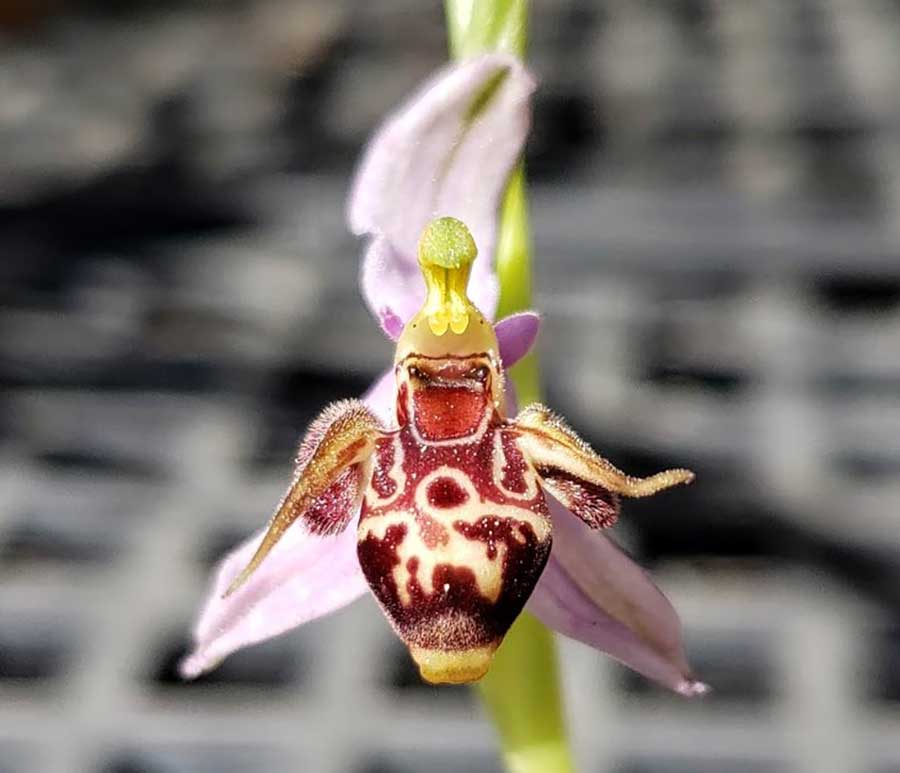 The woodcock bee orchid (Ophrys scolopax-oestrifera) is pollinated by long-horned bees in the genus Eucera. The two waxy yellow blobs above the “head” are the flower’s pollinia, or pollen masses. Photo by Brandon Tam.

In contrast, plants that have co-evolved with specific pollinators often produce no nectar. Members of the Solanum family (which includes nightshade, tomatoes, potatoes, and peppers) do not yield any floral nectar and are pollinated exclusively by bumblebees, which are the only insects capable of buzzing at the correct frequency to induce the flowers to release their pollen. Most orchids do not produce nectar, and many, like the bee orchids, rely on specific pollinators for reproduction. Each flower produces a large quantity of pollen that is contained in the compact pollinia, which are generally delivered to the correct recipient. Expert opinions vary on the exact number of Ophrys species due to the many naturally occurring hybrids that exist within the genus. 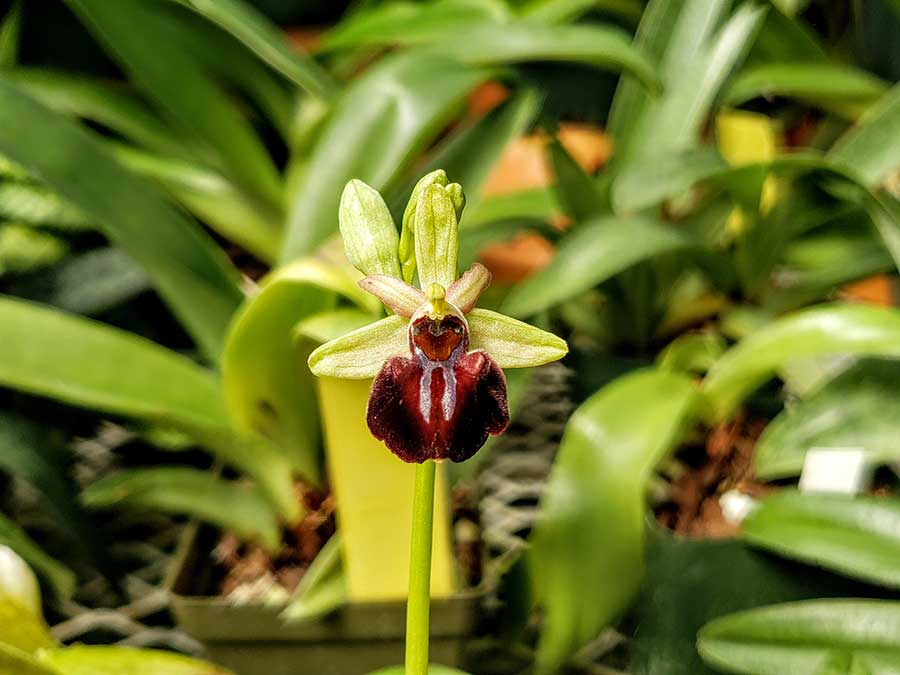 The horseshoe bee orchid (Ophrys ferrum-equinum) is native to Albania, Turkey, and Greece. It owes its name to the characteristic silver U-shape on the lower lip of its blooms. Photo by Brandon Tam.

With more than 10,000 orchid plants, The Huntington’s orchid collection is one of the largest in the United States, and one of the five most diverse collections in the world, with more than 3,600 unique varieties, representing more than 1,500 species and 2,000 hybrids, across 280 genera. In summer 2020, two groups of bee orchids arrived at The Huntington, purchased from a Florida-based grower who continuously imports them from a European nursery and propagator. These new arrivals filled an important niche in the collection.

“People are surprised to find out that orchids are found on every continent in the world except Antarctica,” comments Huntington Orchid Collection Specialist Brandon Tam. “Even though our collection is incredibly diverse, it dawned on me one day that we had orchids representing every continent except Europe. To further illustrate the diversity of orchids around the world, we made it our goal to have this continent represented through the genus Ophrys. Though members of this genus are incredibly easy to grow outdoors in Southern California, they are difficult to find in cultivation within the United States.” 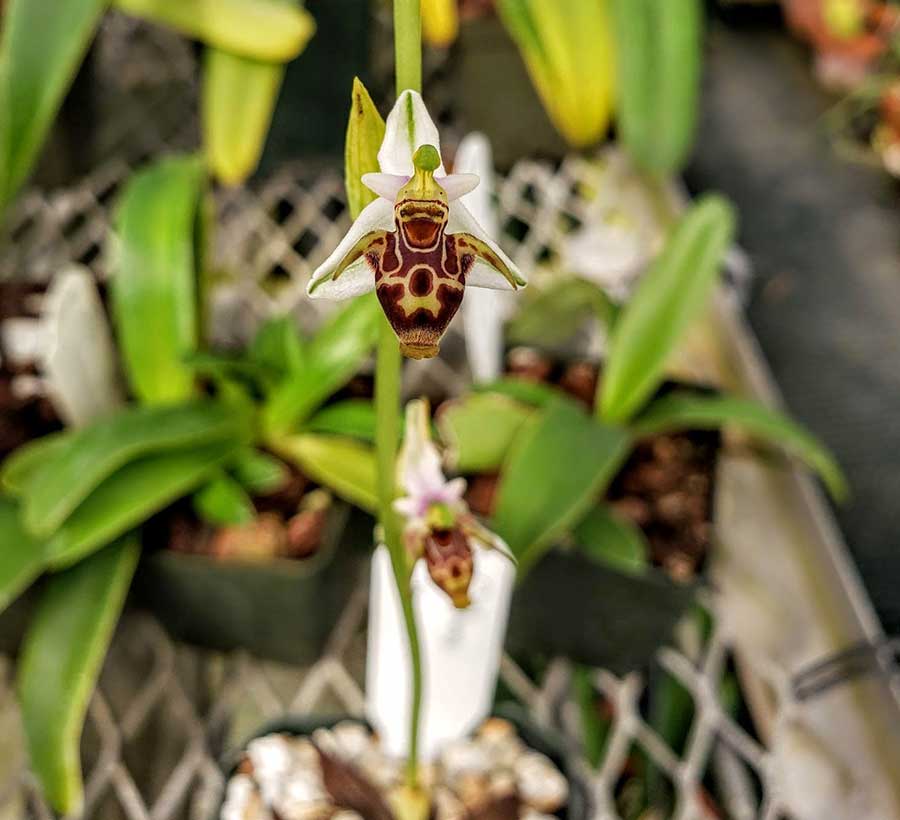 Ophrys mammosa is pollinated by bees in the genus Adrena—miner bees. Its scientific species name translates to “full-breasted” and refers to the swellings on either side of the lip. Photo by Brandon Tam.

The bee orchids will go on display in The Rose Hills Foundation Conservatory for Botanical Science as they come into bloom over the next two months or so. (Due to the nature of flowers, plants may be rotated frequently if they fade faster than expected.) Because these plants are native to Eurasia and Africa, their pollinators are not known to be present here in California, so their floral displays will almost certainly be G-rated. 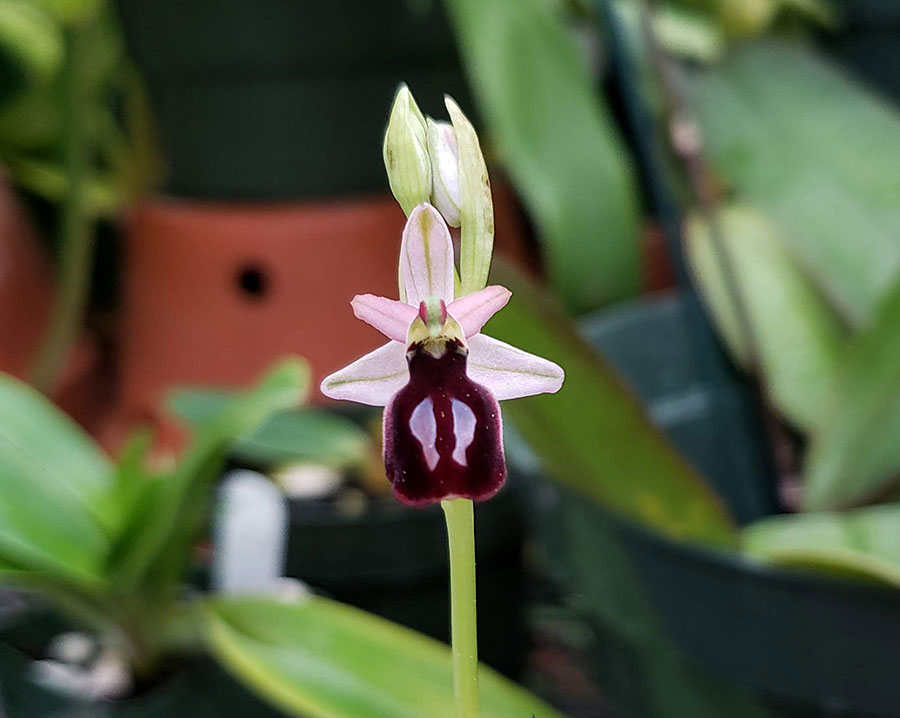 Reinhold’s bee orchid (Ophrys reinholdii) is pollinated by bees in the genus Eupalovskia. It was first described in 1907 and was named in honor of an eminent 19th-century doctor of Athens, Greece. Photo by Brandon Tam.

Plants never cease to amaze. The bee orchid is adorable and so smart.

It is a very crafty plant!

What an interesting article. These orchids are so beautiful. I look forward to visiting soon.

According to our orchid specialist, the bee orchids should be in bloom from the later part of February into March. They'll be in the Conservatory among lots of other cool plants!

What a great article. It brings a new plant family to most of us. I had no idea there were so many mimicry species.

Thank you, Tom! In researching the story, I was also surprised by the number of orchids that mimic insects. The bee orchid/orchid bee relationship is one of the most intriguing pollination stories!

Thank you, Rochelle! I hope you get to see them in person, too!

I’ve been growing orchids for almost 40 years and only recently discovered your fascinating information about specific pollinators for specific orchid species. It took Charles Darwin years of observation to determine that orchids adapted to specific pollinators. Before that it was a great mystery. Thanks!

Thanks for your interest, David! The Huntington orchid collections include a Darwin’s orchid. Hopefully you will be able to see it and some of the bee orchids in bloom. I’m envious of your orchid success. Part of the reason I love to write about them is that I have such a difficult time growing them in my garden.

Great article. Well written with a sense of humor. After reading I ran into the kitchen to look at my orchid from Trader Joe's but alas the blooms were spent and I couldn't see a thing.

Thanks so much, Pamela! I hope your TJ’s orchid blooms again for you. In the meantime, come visit the orchids in the Rose Hills Foundation Conservatory for Botanical Science.