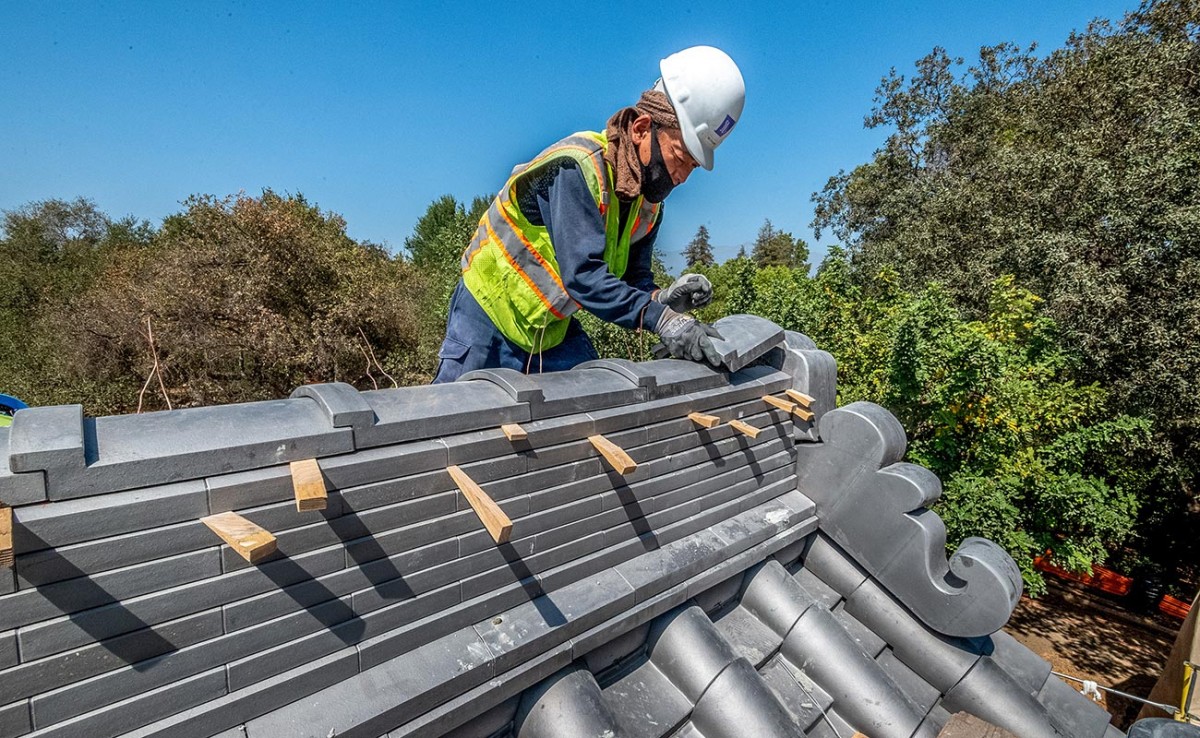 Koji Ono, an artisan from Japan, sets a roof tile in place atop The Huntington’s reconstructed Japanese Heritage House. Photo by John Diefenbach.

The Huntington’s reconstruction of a 17th-century Japanese magistrate’s house—which was shipped to the United States in pieces in 2020 from Marugame, Japan—has made remarkable progress since a formal Shinto roof-raising ceremony marked the historic building’s early stage of reassembly in May 2021.

What was then a basic framework on an acre of cleared land to the north of the iconic Japanese Garden is well on its way to becoming The Huntington’s landmark Japanese Heritage House, comprising formal and semiformal public and family rooms, a rustic housekeeper’s quarters and kitchen, a Buddhist shrine, and a secret “panic room.” 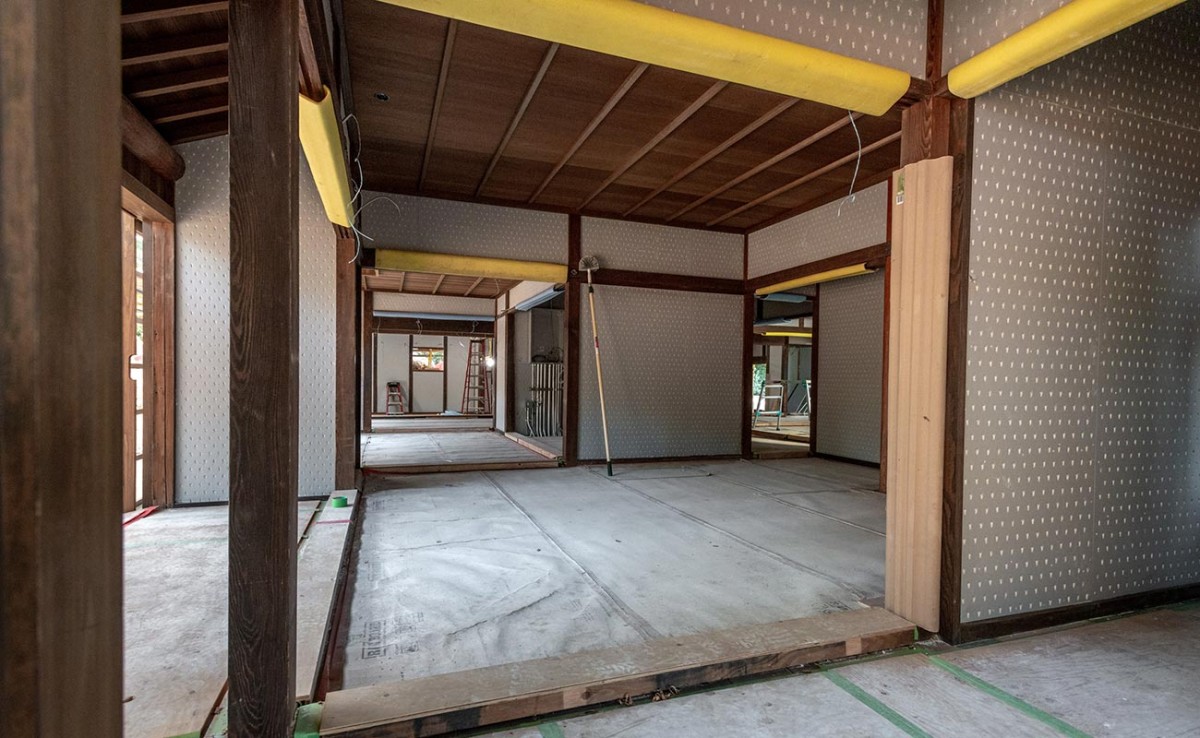 A series of connected rooms in The Huntington’s reconstructed Japanese Heritage House. Photo by John Diefenbach.

Significant work has also been done on the re-creation of a traditional gatehouse. Through its double wooden doors—cut from a single tree—visitors will gain entry to the 320-year-old Japanese Heritage House and its ambient gardens. (Wheelchair accessibility has been built into both walk-through structures.)

Conducting a tour of the work in progress one rainy December weekday, Robert Hori, cultural curator and programs director for The Huntington’s Botanical Gardens, led the way into the house. Despite the plastic sheeting underfoot and the tools and equipment suggesting otherwise, the amount of reconstruction done to the interior made it seem like the house was close to completion. 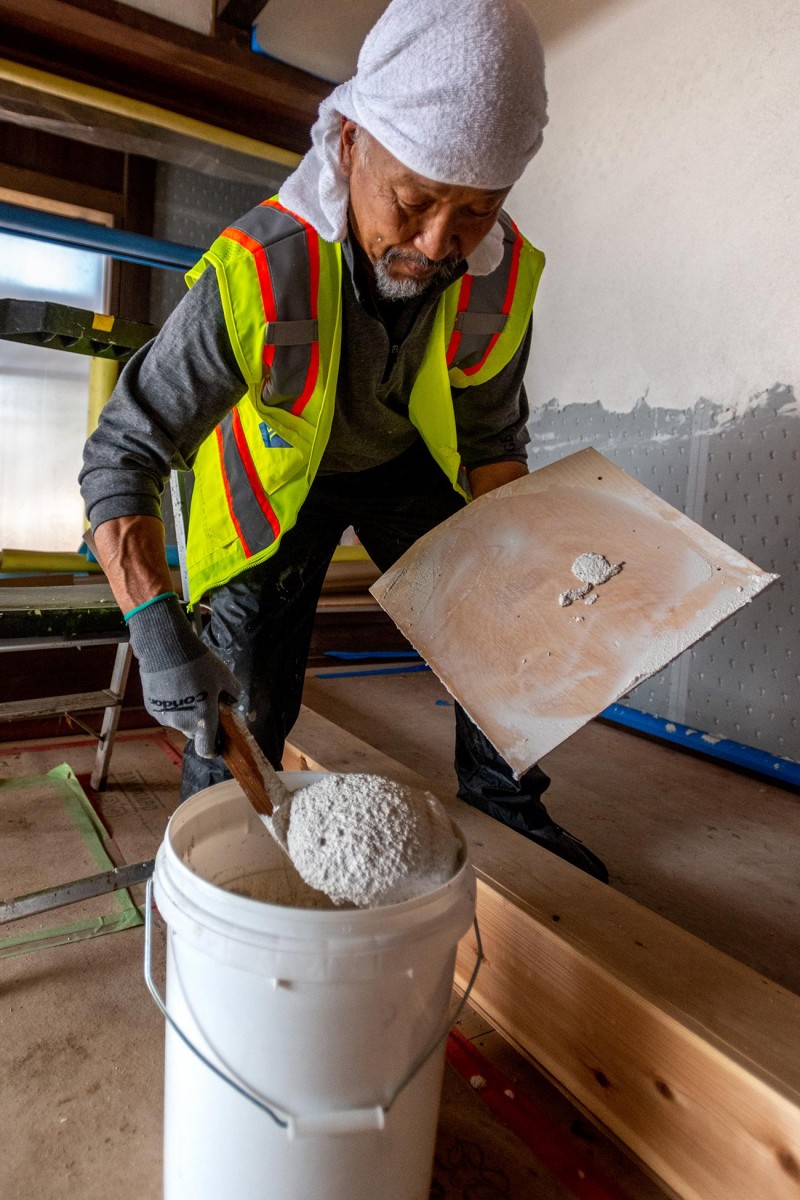 Rustic servant and worker rooms feature plastered walls that are rough with straw fibers. These are distinct from the formal and semiformal rooms, which are defined by increasingly refined wood and plaster finishing as well as subtle decorative touches. Massive, naturally curved red pine beams, dating back more than 300 years, serve as the spine of the house, supporting the weighty, clay-tiled roof.

Graceful sliding paper screens are in place, capable of opening the house to garden views or turning three formal rooms into one. The housekeeper’s tiny room presents a study in contrasts: An outdoor privy of the period has been dug, and visible under the eaves is an opening to the secretly accessed “panic room,” which once provided residents refuge from danger. 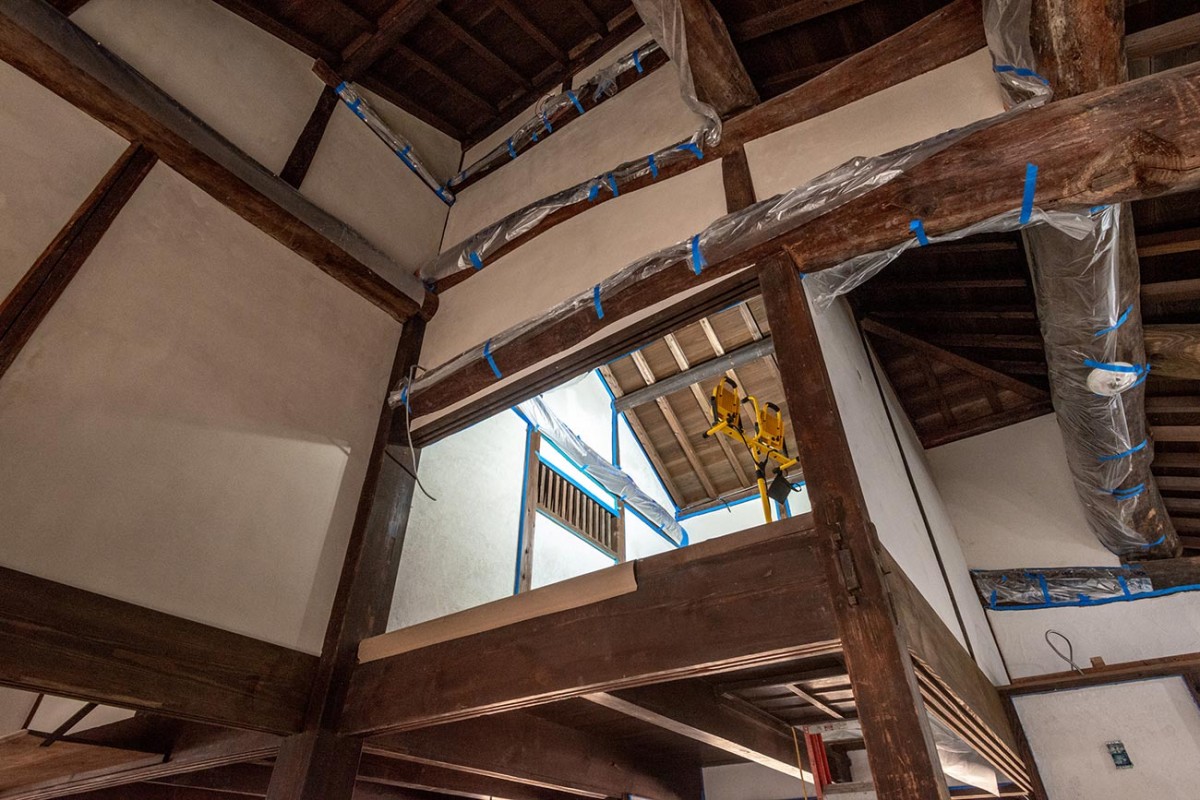 A view into the hidden second story. Behind the wooden grill on the left is the secretly accessed “panic room” that once provided residents of the house refuge from danger. Photo by John Diefenbach.

Outside, specialists in traditional Japanese building techniques who had flown in from Japan for the project—head carpenter Katsuhiko Nakano; carpenters Kohei Yamamoto, Jonathan Billings, and Jonathan Stollenmayer; head plasterer Hiromasa Murakami; and plasterer Emily Reynolds—continued work on the gatehouse, a replica of the structure that once fronted the magistrate’s walled compound in Marugame. (“We know what it looked like from aerial photos taken after World War II, during the Allied occupation of Japan, and from family photos probably taken in the 1950s. A couple of decades later, a typhoon destroyed the gate,” Hori said.)

When finished, the Japanese Heritage House will be “an encyclopedia of Japanese architectural style and building techniques,” Hori noted. A primary resource for scholars, architects, and others, it will feature examples of 10 of the 17 traditional skills of Japanese wooden architecture that UNESCO named in 2020 as part of the organization’s compendium of the “intangible cultural heritage of humanity.” 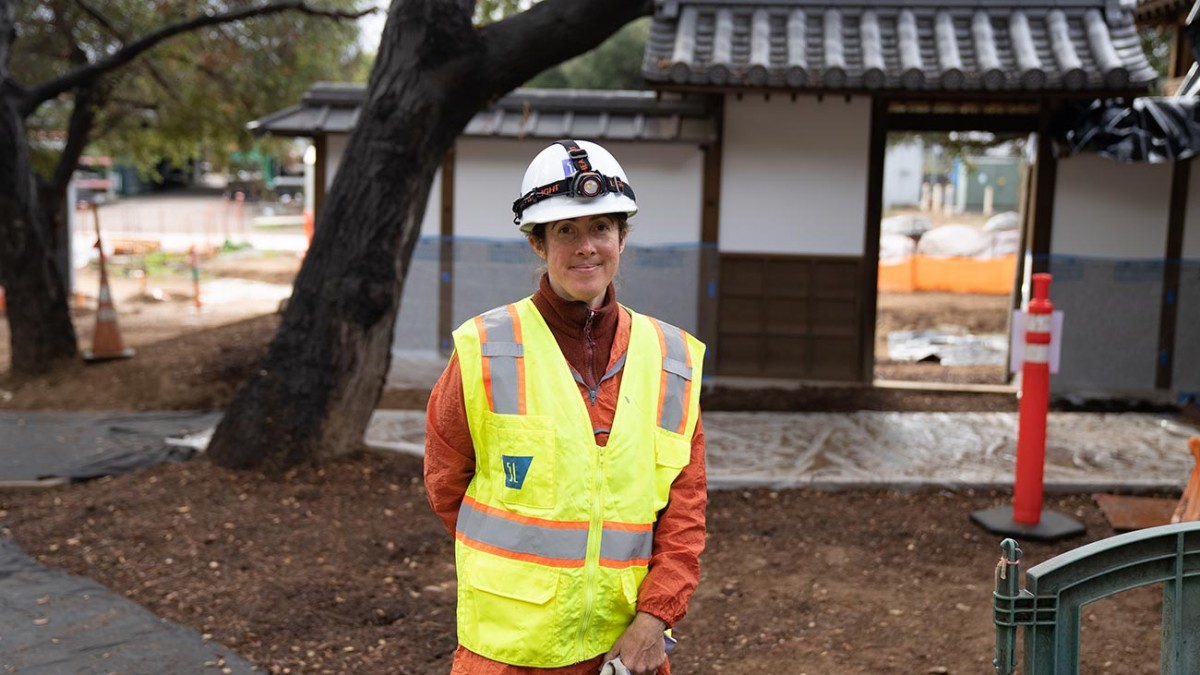 Plasterer Emily Reynolds takes a break from work on the gatehouse, a replica of the structure that once fronted the magistrate’s walled compound in Marugame, Japan. Photo by Aric Allen.

The varied plastering (some textured with fibers, some smooth, some hand-sculpted) and the elegantly curved clay roof tiles are both decorative and resistant to fire and water damage, Hori explained. (Stollenmayer demonstrated how the wood was hand planed rather than sanded to avoid porous surfaces, creating a satin-smooth beam by removing translucent strips of wood from it as thin as tissue paper.) 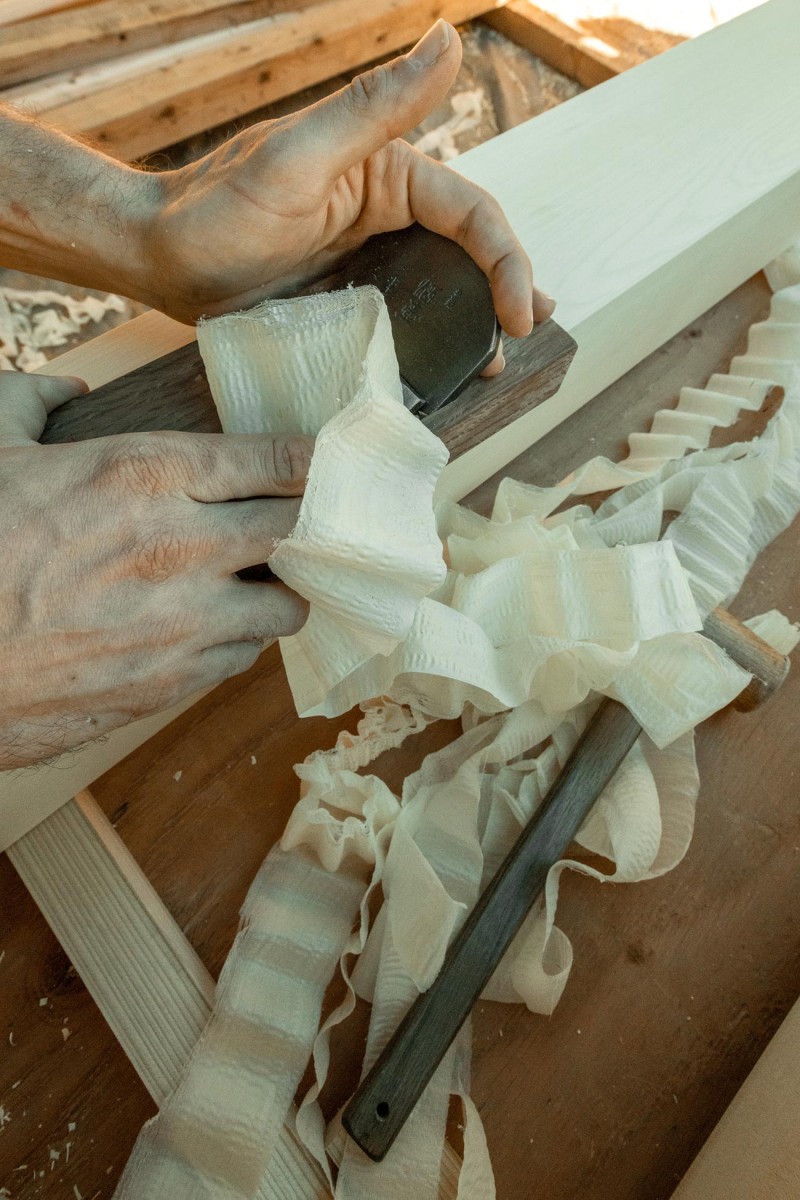 When the house was originally assembled, Hori said, the materials used were acquired through such sustainable processes as the tapping of lacquer trees for their sap and the practice of forest conservation. “Sustainability will be wrapped into the story of the house and its grounds,” he added, pointing out a future rice field staked out near the gatehouse. (Seasonally, there will also be plantings of mustard, canola, soybeans, and wheat on the site.)

The Japanese Heritage House expands The Huntington’s celebration of Japanese culture, which began with the building of the iconic Japanese Garden in 1911 and the acquisition of the 19th-century Japanese House (restored in 2013). This cultural conversation continued with the addition of the bonsai court in 1968 and a ceremonial teahouse in 2010. Built in Kyoto in 1964 and donated to The Huntington by the Pasadena Buddhist Temple, the teahouse was sent to Japan for restoration, reassembled, taken apart again, then shipped to The Huntington for on-site construction. It was “a dry run,” Hori said, for the Japanese Heritage House reconstruction. 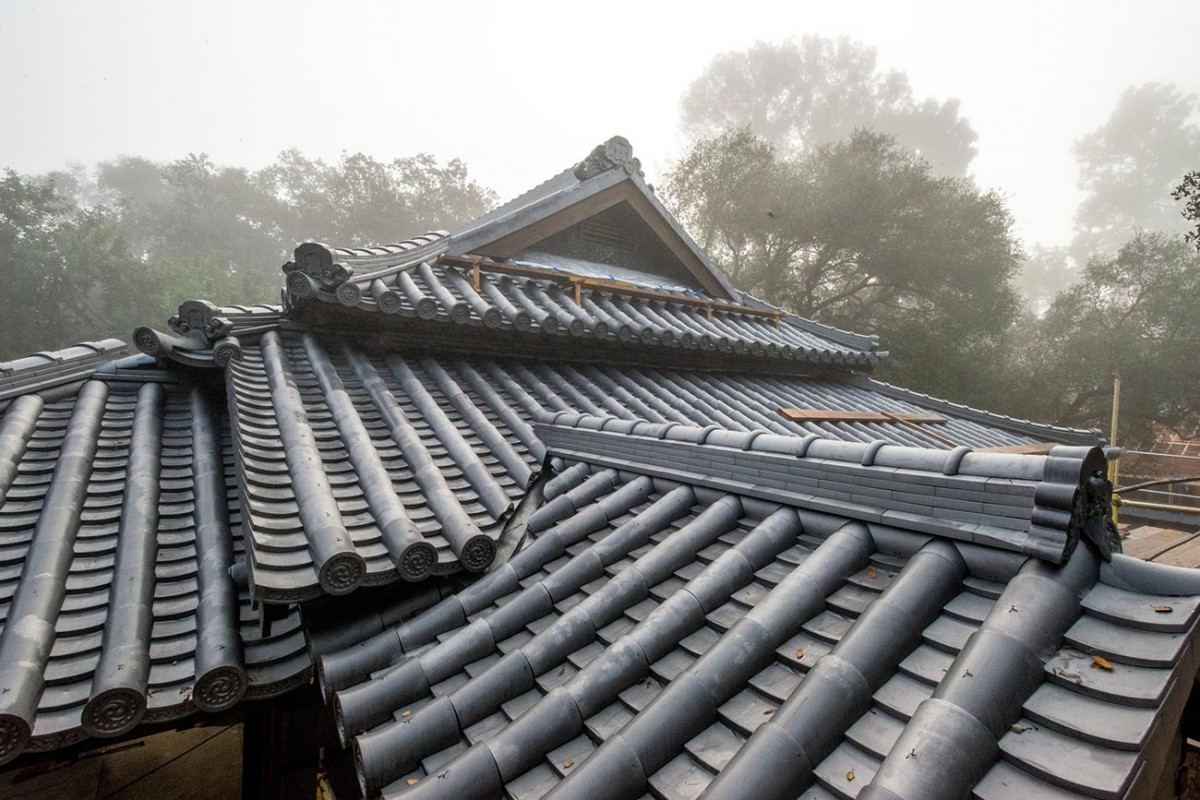 The roof tiles of the Japanese Heritage House on a misty afternoon. Photo by John Diefenbach.

Watch a video of Robert Hori discussing the reconstruction of the Japanese Heritage House.

Lynne Heffley is a freelance writer and editor based in South Pasadena, California.