A Walk on the Wilde Side 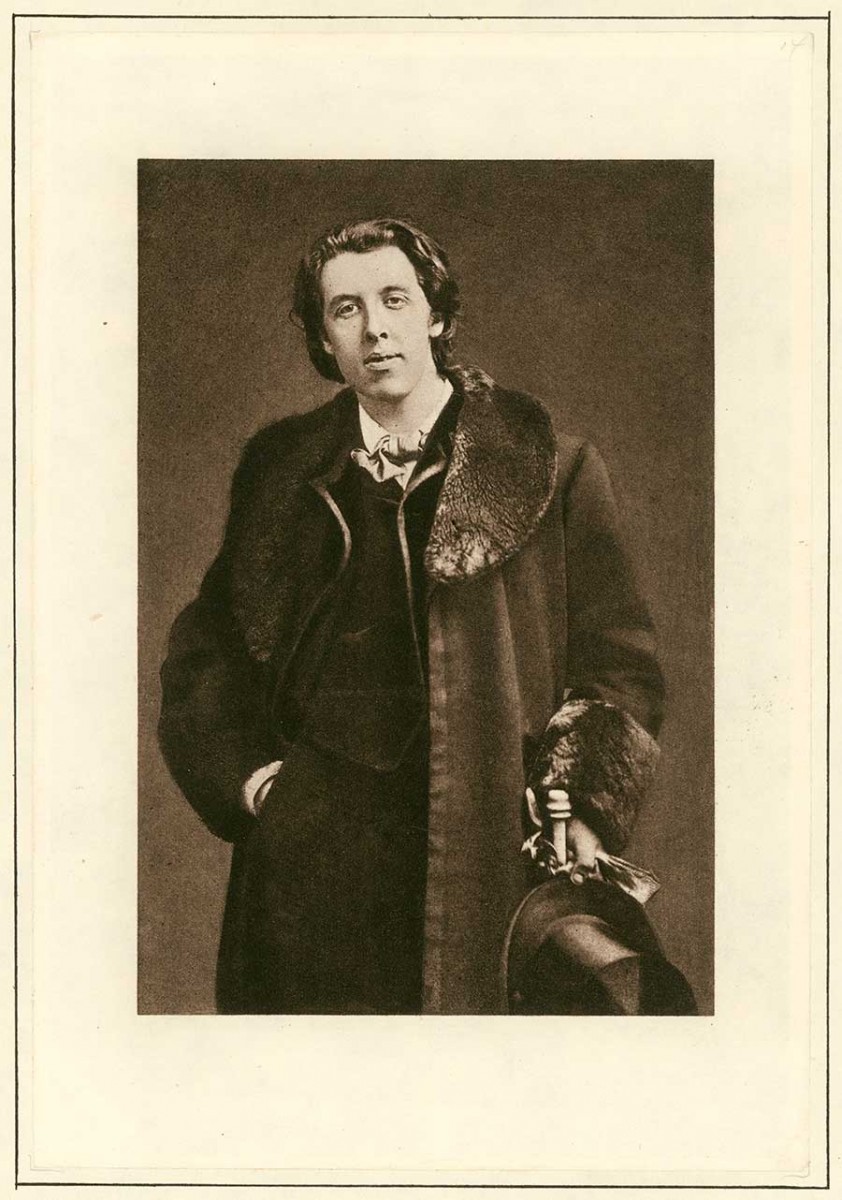 Born in Dublin and named for Irish folk heroes, Oscar Fingal O’Flahertie Wills Wilde (1854–1900) became a cultural hero in his own right. The poet, playwright, and lecturer was a larger-than-life dandy and a popular London dinner guest in both cultural and social circles. But in a scandalous pair of civil and criminal trials, Wilde was accused of homosexual activities by his lover’s aristocratic father. Wilde sued for libel, but his celebrity and witty aphorisms could not protect him. The libel suit was dropped, and Wilde was convicted of “gross indecency” in 1895. He served two years of hard labor in prison from 1895 to 1897. His health and career destroyed, he died in penury in Paris just three years later, estranged from his family. He was 46.

Although lingering aspersions were cast upon Wilde’s reputation in the British Isles after his death, his international fame and influence continued to grow. His biting satire and scintillating epigrams attracted new admirers in the 20th century, especially among LGBTQ actors and artists. Wilde’s persecution became a rallying cry for some in the Gay Rights movement in England—he was seen as a genius crushed by the criminalization of homosexuality. 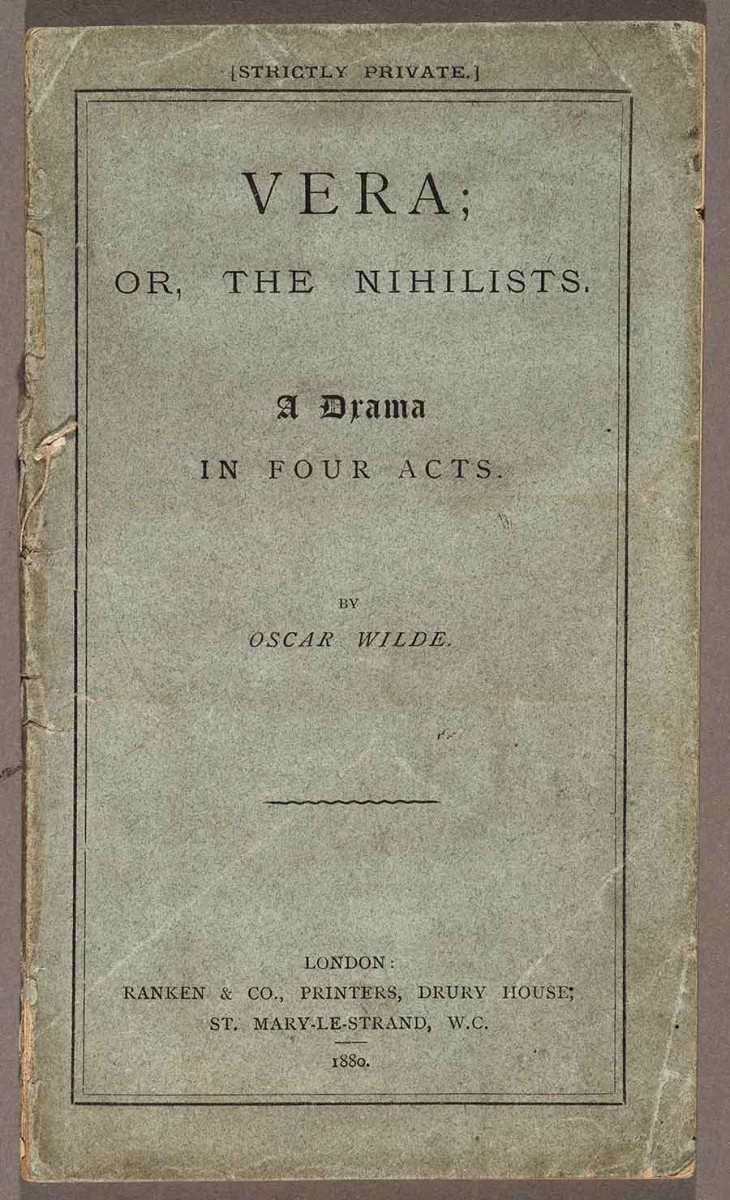 Oscar Wilde, front cover of the first edition of Vera; or, The Nihilists: A Drama in four acts, 1880. The Huntington Library, Art Museum, and Botanical Gardens.

Among Henry E. Huntington’s earliest acquisitions were works by Wilde. Below is a selection of items from the Library, highlighting some of Wilde’s celebrated and lesser-known works. (The bolded quotes below are Wilde’s.)

“In a good democracy, every man should be an aristocrat.”

Wilde’s first play, Vera; or, The Nihilists, is a tragedy set in tsarist Russia. The Huntington's copy of the first edition is one of only two that were known to exist in 1924, when Huntington acquired it; three additional copies have since surfaced.

The drama follows a revolutionary assassin torn between her political ideals and the aristocrat she loves. The play was also a veiled commentary on Irish politics. Wilde’s mother was an Irish nationalist, as well as a published poet and translator. 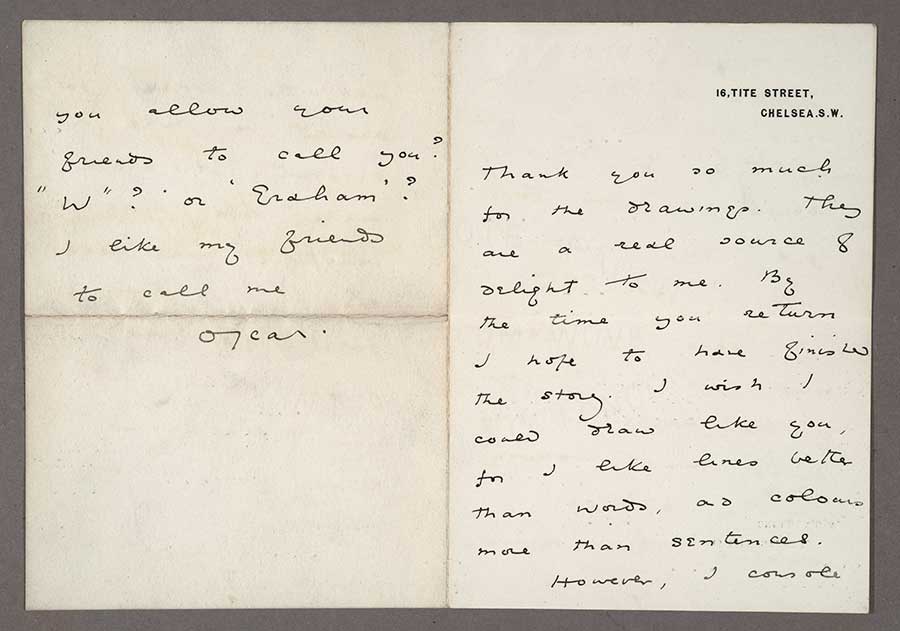 “Poetry should be like a crystal, it should make life more beautiful and less real.”

Walford Graham Robertson (1866–1948) was a gentleman painter who moved in many of the same art and theatrical circles as Wilde. He was a judicious art collector, acquiring works by William Blake before they were generally appreciated.

Robertson also wrote verse and plays, illustrated books, and designed for the theater. In 1898, he designed scenery and costumes for a British production of Wilde’s French-language play, Salomé. Sarah Bernhardt intended to play the starring role, but the production was banned by the censor for its depiction of Biblical figures. The play was never produced in England during Wilde’s lifetime. 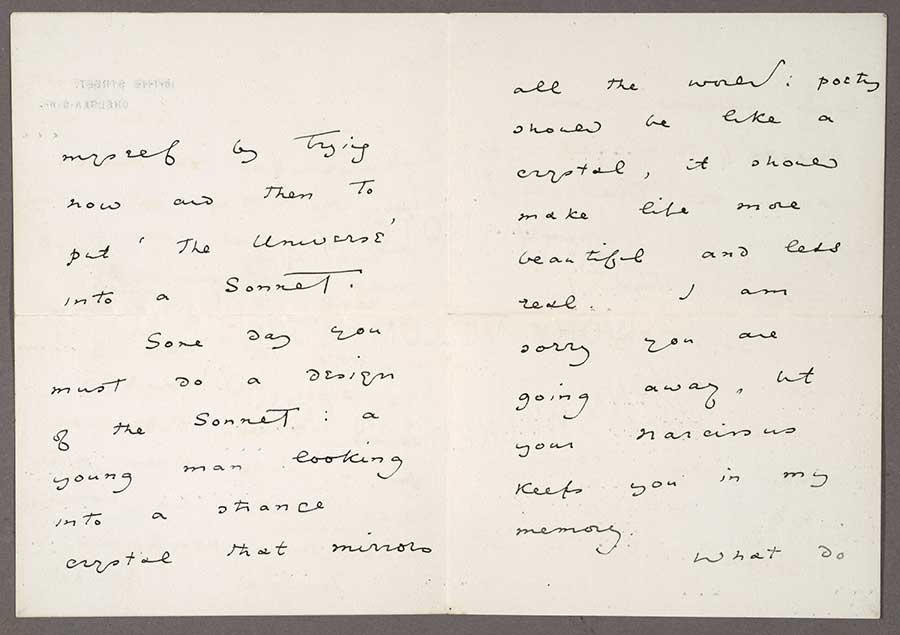 In this letter, Wilde laments that his artistic talents as a writer cannot match Robertson’s talent as a painter and encourages his new friend to capture the essence of poetry in his visual art.

Here is a full transcription of the letter:

Thank you so much for the drawings. They are a real source of delight to me. By the time you return I hope to have finished the story. I wish I could draw like you, for I like lines better than words, and colours more than sentences. I console myself by trying now and then to put ‘The Universe’ into a sonnet.

Some day you must do a design of the sonnet: a young man looking into a strange crystal that mirrors all the world: poetry should be like a crystal, it should make life more beautiful and less real. I am sorry you are going away, but your narcissus keeps you in my memory.

“Life is far too important a thing ever to talk seriously about it.”

Wilde wrote two books of original fairy tales, The Happy Prince and other Tales (1888) and A House of Pomegranates (1891). He married Constance Floyd in 1885, an arrangement that quickly produced two sons. Although he purportedly recited his fairy tales to his boys, these stories are written with morals more aimed at adults than at children. 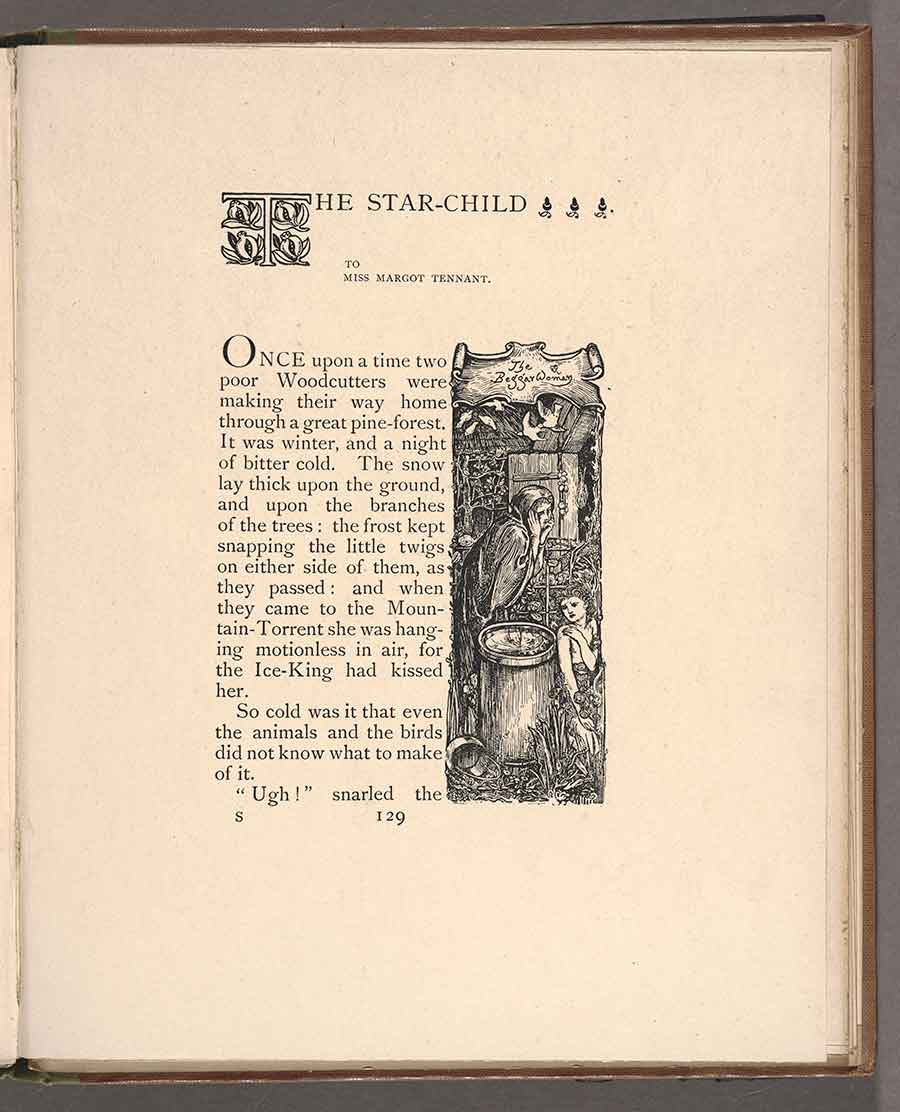 Oscar Wilde, first page of the fairy tale “The Star-Child” in A House of Pomegranates, 1891. The Huntington Library, Art Museum, and Botanical Gardens.

“He is really not so ugly after all, provided, of course, that one shuts one's eyes, and does not look at him.”

Wilde’s father was a renowned surgeon and folklorist. As a result, Oscar grew up steeped in Irish folktales. He even learned a little of his father’s native Gaelic, in addition to French and German. “The Star Child” is the story of a boy who grows up vain and cruel because he believes he is the child of a star. When he meets his human mother, he is repulsed by her appearance and rejects her. Cursed with ugliness as punishment, the boy must learn kindness to find redemption. 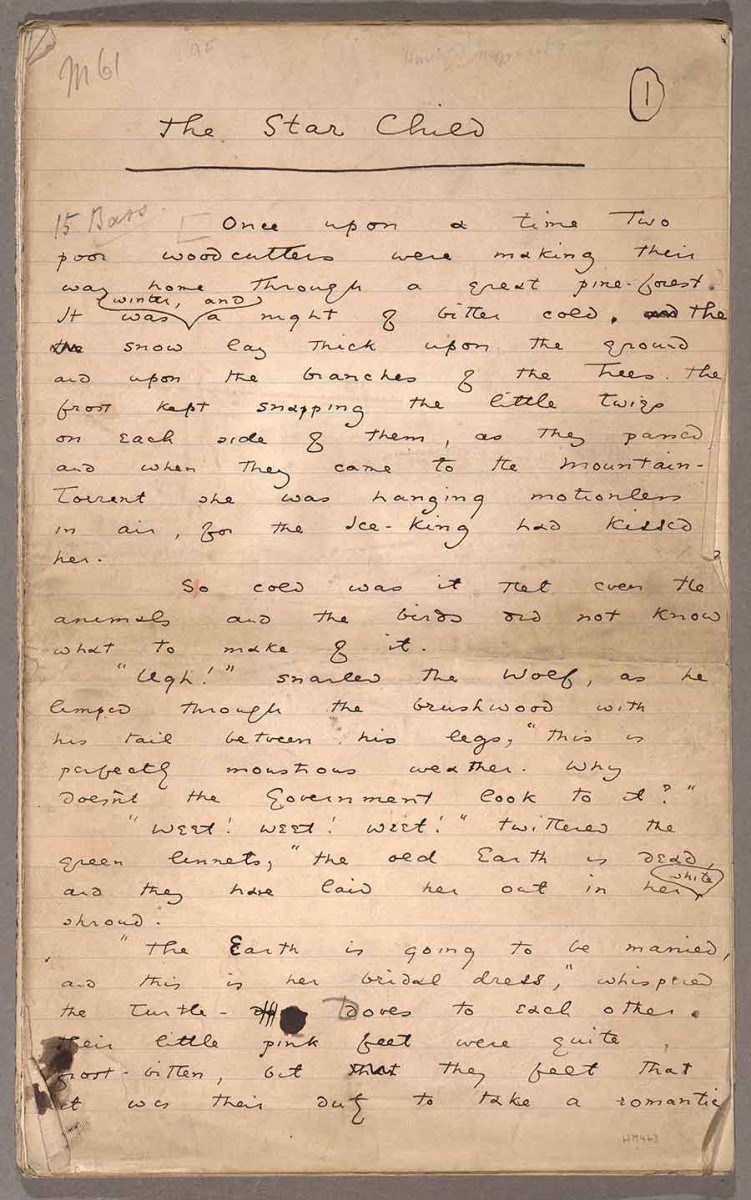 Oscar Wilde, first page of the autograph manuscript for his short story “The Star Child.” The Huntington Library, Art Museum, and Botanical Gardens.

“There is no such thing as a moral or an immoral book. Books are well written, or badly written. That is all.”

The Picture of Dorian Gray, Wilde’s only novel, first appeared in Lippincott’s magazine in 1890. The now classic tale recounts the licentious life of a self-absorbed man whose sins leave no mark upon his visage, but instead make haggard the portrait he hides away in an attic. The novel was deemed filthy and immoral by critics for its homoerotic themes, and it was later used as evidence against Wilde in his criminal trial. 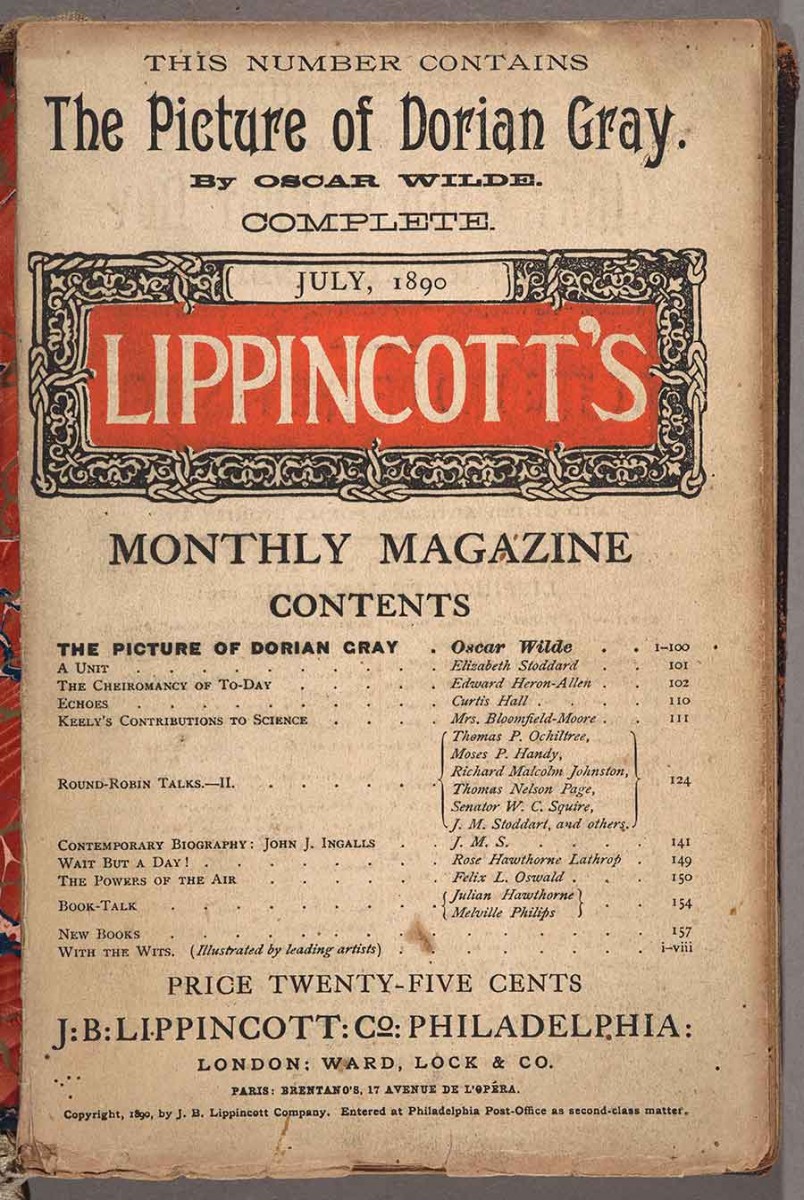 “I can resist everything except temptation.”

Wilde was a famous aesthete, advocating art for art’s sake. In contrast, the 19th century saw the rise of popular magazines and graphic advertising—art for the sake of commerce. Items offered for sale in the same issue of Lippincott’s magazine that launched Wilde’s novel The Picture of Dorian Gray include two types of “instant” chocolate. Hot chocolate was a luxury in the 17th and 18th centuries, consumed in chocolate houses alongside more enduring coffee houses. Advances in technology through the 19th century changed the bitter, grainy hot chocolate drink of the past into a smooth, sweet, milk-infused treat beloved by the masses. 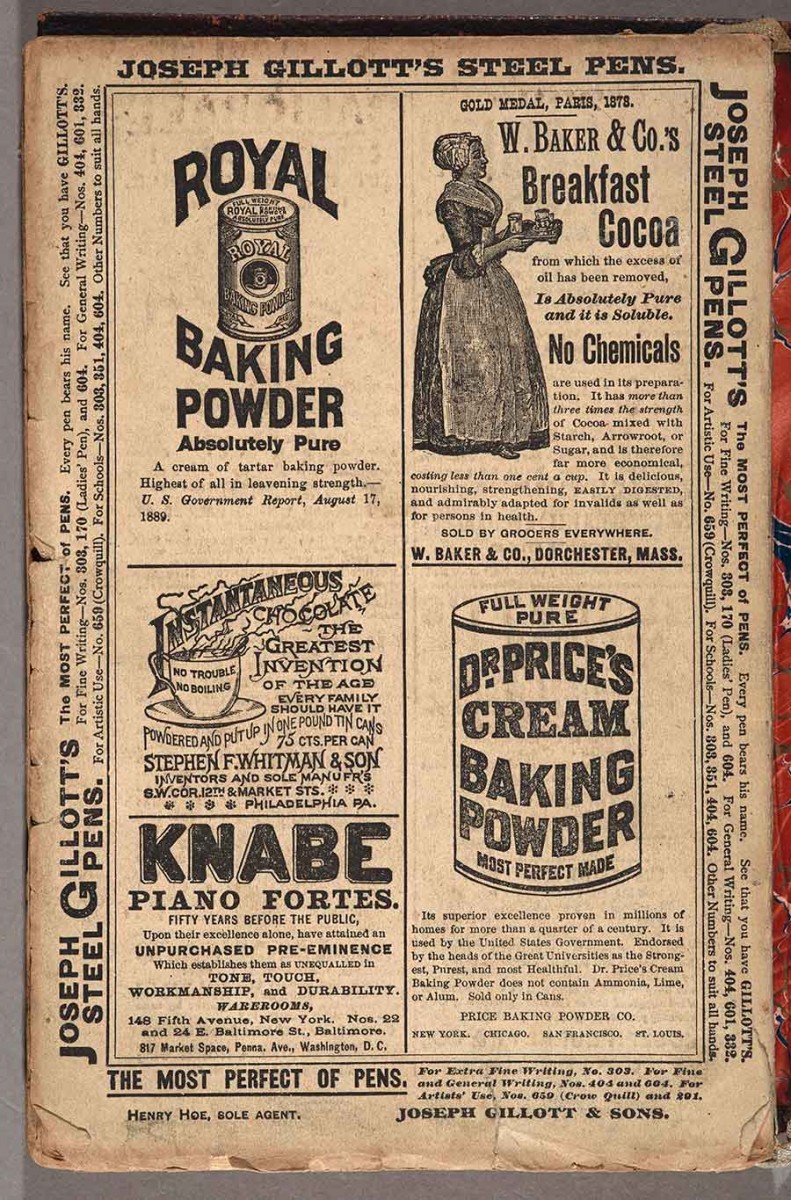 “To love oneself is the beginning of a lifelong romance.”

Wilde’s greatest triumphs are his comedies, including Lady Windermere’s Fan (1892), A Woman of No Importance (1893), An Ideal Husband (1895), and his final offering, The Importance of Being Earnest (1895). Critiques of Victorian society, these plays are filled with Wilde’s signature epigrammatic wit and enjoy enduring popularity. 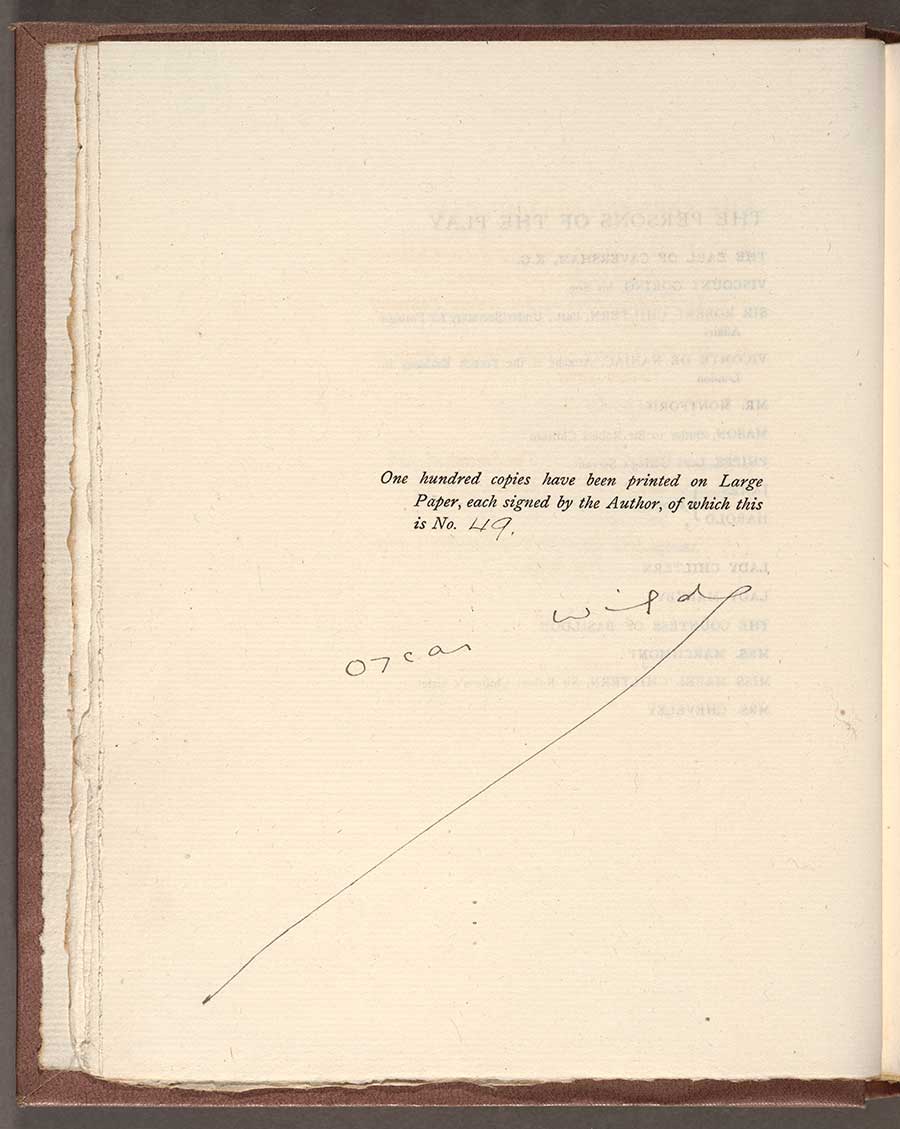 Oscar Wilde’s full signature on a limited-edition publication of his play An Ideal Husband. The Huntington Library, Art Museum, and Botanical Gardens.

Ms. Russell's stellar writing about another stellar writer, Mr. Wilde, is both engaging and entertaining. I enjoyed the read and learned things. I've seen movies about Dorian Gray but never attached Oscar Wilde to them. Thank you, Ms. Russell.