Big Creek and the Creek Fire 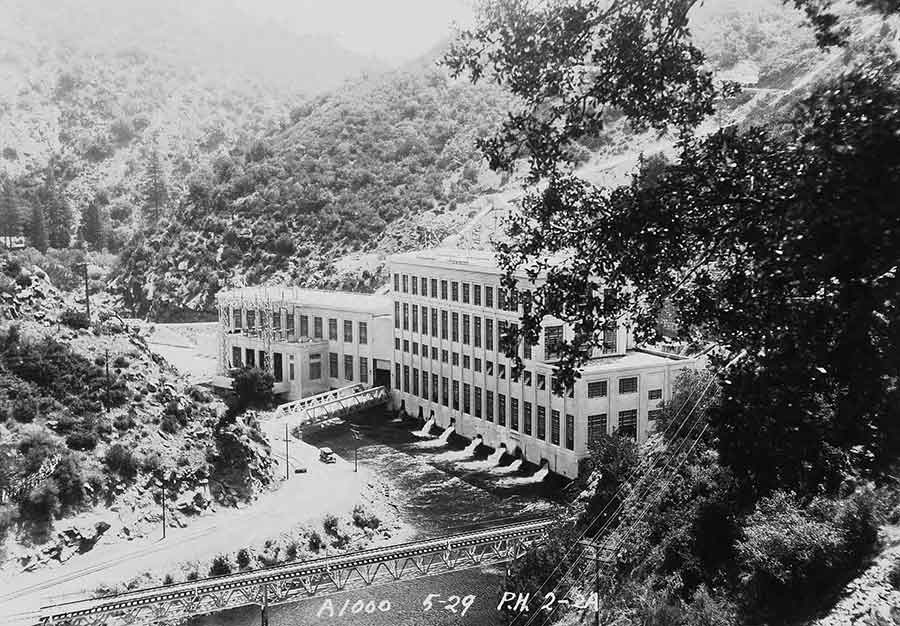 G. Haven Bishop, Looking at Big Creek Plants 2 and 2A, May 29, 1929. Southern California Edison Photographs and Negatives. Bishop wrote: “I believe this is the first picture we have taken since the completion of the steel incline trestle across Big Creek.” The Huntington Library, Art Museum, and Botanical Gardens.

As the Big Creek area faces devastation, historian William Deverell, director of the Huntington-USC Institute on California and the West, reminds us of the important role the area has played in the history of Southern California.

The catastrophic Creek Fire, burning out of control in the Sierra Nevada Mountains north of Fresno, is but one of hundreds of fires that have bedeviled California in recent months. This one, which is burning across nearly 100,000 acres of steep and heavily forested terrain, has a particular valence with The Huntington and the history of Southern California. 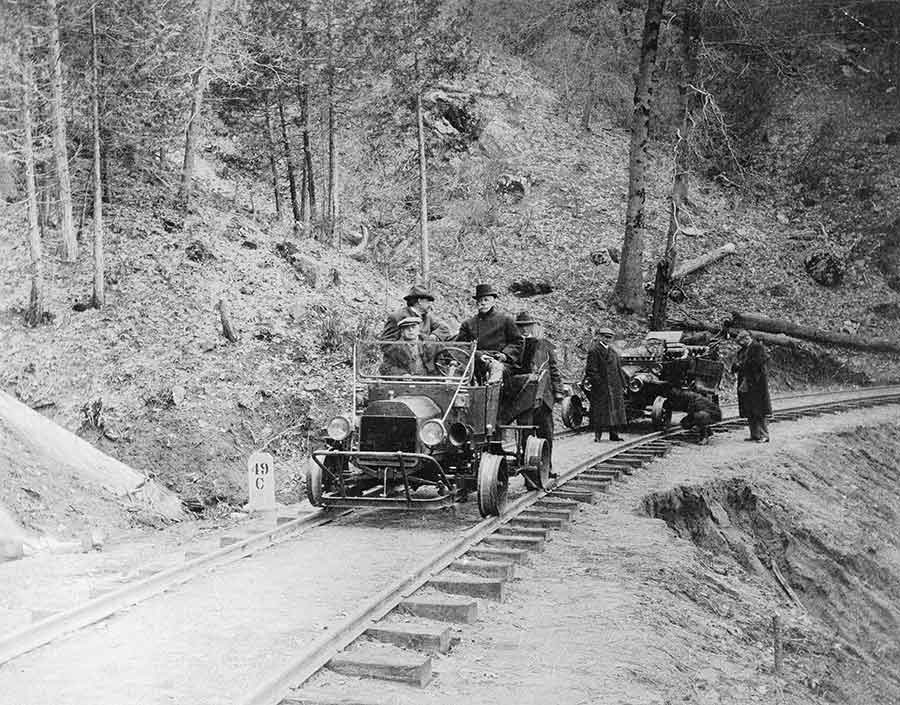 Henry E. Huntington (seated on the right in the backseat of the closer automobile), inspecting track at Big Creek, California, on April 7, 1914. In 1910, Huntington purchased the water rights to Big Creek, a branch of the south fork of the San Joaquin River in eastern Fresno County, and set about designing the first massively scaled hydroelectric project in the United States. Unknown photographer. The Huntington Library, Art Museum, and Botanical Gardens.

It was here that Henry E. Huntington and his business partners developed the hydroelectric operations on the San Joaquin River and its Big Creek tributary through the Pacific Light and Power Company. Once he had sold off big chunks of his famed suburban trolley system, Huntington sank capital and energy into the generation of cheap electricity by way of gravity in these Sierra Nevada watersheds. He partnered with lumber magnate William Kerckhoff and electrical power pioneer A.C. Balch to construct the huge power operations designed to deliver inexpensive electricity 240 miles away to power-hungry Los Angeles.

Opened in 1913, the same year that the Los Angeles Aqueduct brought the Owens River the same distance to LA, Big Creek's hydroelectric facilities and infrastructure constituted one of the world's largest construction projects of the era. Owned since 1917 by Southern California Edison, Big Creek still provides nearly 15 percent of all hydroelectric power generated in California. 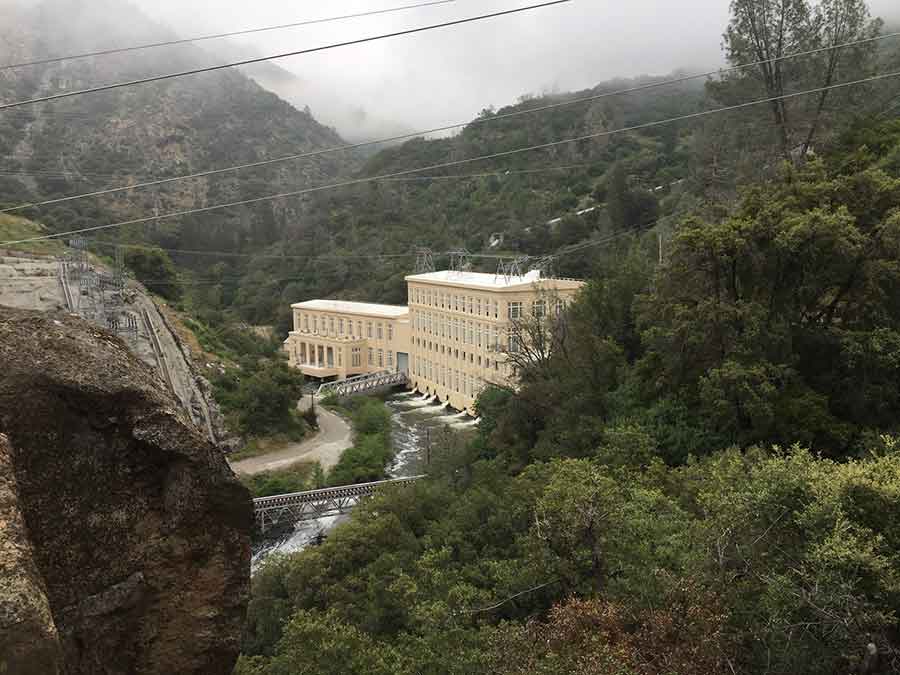 It’s impossible to know what its status is now. News from the region is spotty. The Creek Fire is burning all around Shaver and Huntington Lakes, and apparently half the homes in the picturesque little town of Big Creek have been destroyed. Campers were helicoptered out the other night. As I write this from northern Wyoming on Monday morning, the fire is zero percent contained, and the valley where I am is filled with smoke—most of it probably from nearby fires in Idaho, but some of it probably blown here from California.

We wrote about Big Creek in 2019, in the context of Founder Henry E. Huntington’s drive to develop Los Angeles into "the most important city in this country, if not the world.”

We camp each year at Mono Hot Springs near Edison Lake, and always stop at the pump station east of Huntington. What is relation of the Big Creek station to the Edison/Florence/Huntington system? Expand please! Btw, just texted with the Mono Hot Springs camp host, she was evacuated by Chinook this morning along with campers and others from Vermillion. Scary and horrible fire.

Thanks for this note, Annette. There are two superb historical monographs which take up some of this history: Clark Davis, Company Men and William Friedricks, Henry Huntington and the Creation of Southern California. Davis's book is an analysis of the rise of white-collar labor, and Southern California Edison (and its principal leadership) occupy a case study in the book. Bill Friedricks writes of the Big Creek project(s), and brings Henry Huntington into the story, the landscape, and the development of such a huge hydroelectric operation alongside partners like Kerckhoff (whose influence and power across late 19th and early 20th century California is little understood) and A.C. Balch.

I visited Big Creek as part of a study tour with SoCal Edison 10 years ago. The area, with its several lakes at different altitudes used to generate electricity, is gorgeous and wooded and hasn't burned for a very long time. Let's hope it escapes destruction—its loss would be a huge blow to Southern California, both in terms of a power resource and as a beautiful natural and recreational resource.

Myron and Mary Glenn lived in Big Creek and Myron helped build Powerhouse. He wrote a book about their lives, called Sierra Nevada Interlude. He's my children's great grandfather. You will love it!

What a wonderful reference. Thank you!

Harold Lukens Doolittle (American 1883-1974) was born in Pasadena. He attended Throop Polytechnic Institute in engineering and went on to get his Bachelors at Cornell in engineering. He would then spend 35 years at California Edison Company before he would retire early in 1943 to do secret work at Cal Tech for the war effort. For the Big Creek project he was Chief Design Engineer.

Additionally he has been described as a Renaissance man, working in all the graphic processes but he is most noted for his aquatints of the California landscape particularly those of Yosemite. He built his own press and preferred to make his own linen paper. The Huntington Library was gifted 50 of Harold Doolittle's prints from his estate at his death.

I spent a considerable amount of time this summer fascinated by the Big Creek Hydroelectric Scheme. I marveled at the brilliance in the engineering of the project. I dedicated time to travel from my home in Fresno to tour the powerhouses, the surrounding lakes, dams, and beautiful outdoor sights. The day the fire broke out I was with my two-year-old son teaching him to fish just below the mammoth pool powerhouse. As we were driving out of the canyon I noticed smoke creeping down the valley. I never would have imagined that that would be the last time that I would ever see the area surrounding powerhouse 8 and dam six lake in all of its glory. I genuinely believe that the Big Creek Hydroelectric project was and still is an under appreciated piece of the history.