"The Last Gleanings" of Jules Breton 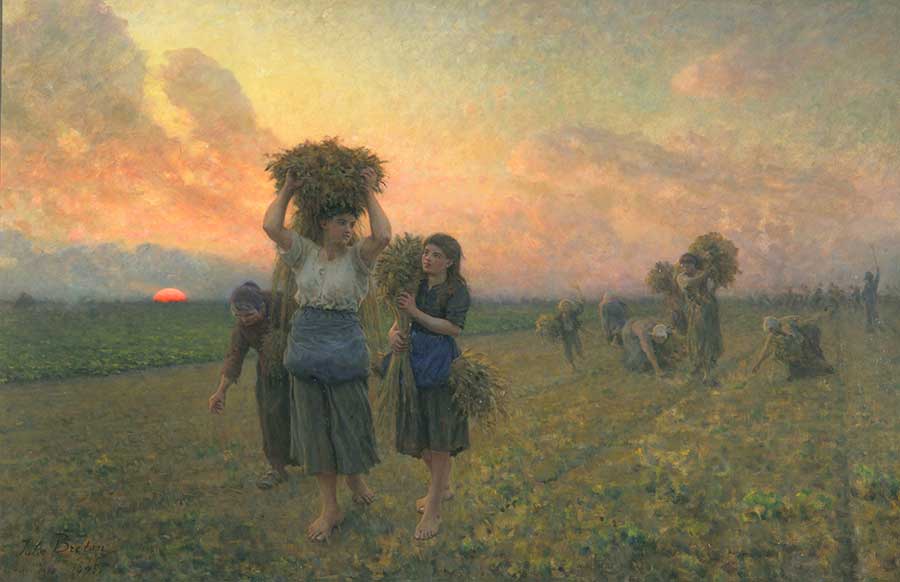 The orange glow of the setting sun washes over the low-lying clouds and almost matches the rosy cheeks of the two young women in the foreground walking toward us.  On the far right and off in the distance, where the planted rows converge at the horizon, we see the smaller and less distinct figures of the harvesters, walking away from us as they leave the field. Perhaps the man's raised stick signals the end of the workday.

This scene depicts what is called gleaning, a charitable activity that allowed the poor and destitute members of a community to collect leftover material after a commercial harvest. Gleaning is an ancient tradition—a prerogative of women and children—that was so important in past rural societies that it was deemed sacred in Christian, Jewish, and Islamic contexts. 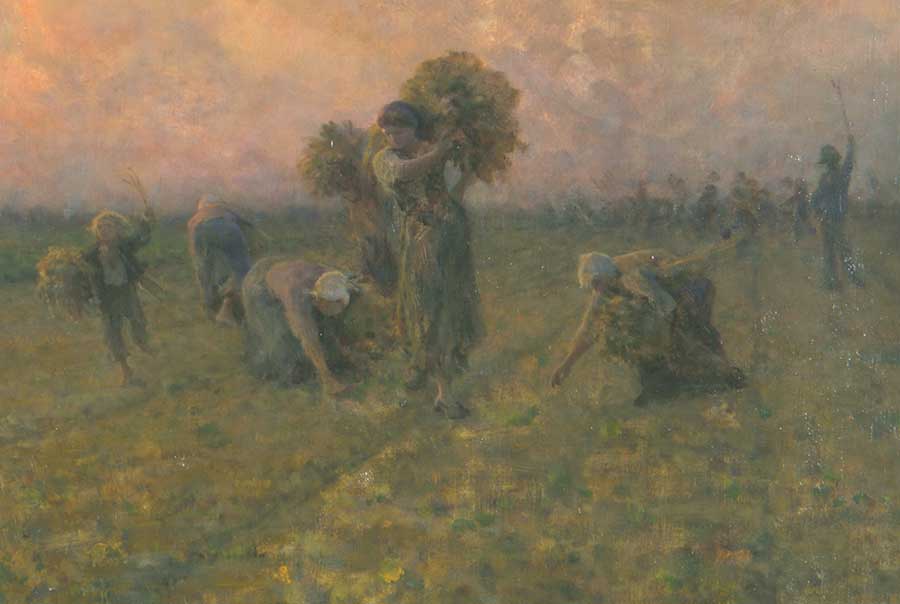 Where the planted rows converge at the horizon, behind this group of six gleaners, the harvesters walk away as they leave the field. Perhaps the man on the far right has raised his stick to signal the end of the workday. Jules Adolphe Aimé Louis Breton, detail of The Last Gleanings, 1895, oil on canvas, 36 1/2 x 55 in. (92.7 x 139.7 cm.). The Huntington Library, Art Museum, and Botanical Gardens.

The three women in the foreground capture our attention. Representing the three ages of humankind—youth, maturity, and old age—they raise the humble subject of the painting to the level of allegorical universality. At the same time, the interaction between the two younger women hints at a personal, emotional, familial bond. Perhaps they are mother and daughter. The figures are substantial and strong, verging on the monumental. Their bundles are ample. Were it not for their bare feet, we might misunderstand their plight. Well-fed figures in a sunset scene wearing peasant blouses and denim may not immediately suggest hardship and hunger.

The painting provides the viewer with a mixed message. The luminescent rural scene populated by seemingly happy and healthy women belies the trauma of poverty. In the late 19th century, the defeat of France in the Franco-Prussian War and the subsequent Paris Commune led to bloodshed and deprivation. And throughout the century, France remained a peasant nation, with three out of four men—many poverty-stricken—making their living by farming. Women, children, and the aged sought out gleaning to supplement their meager provisions. 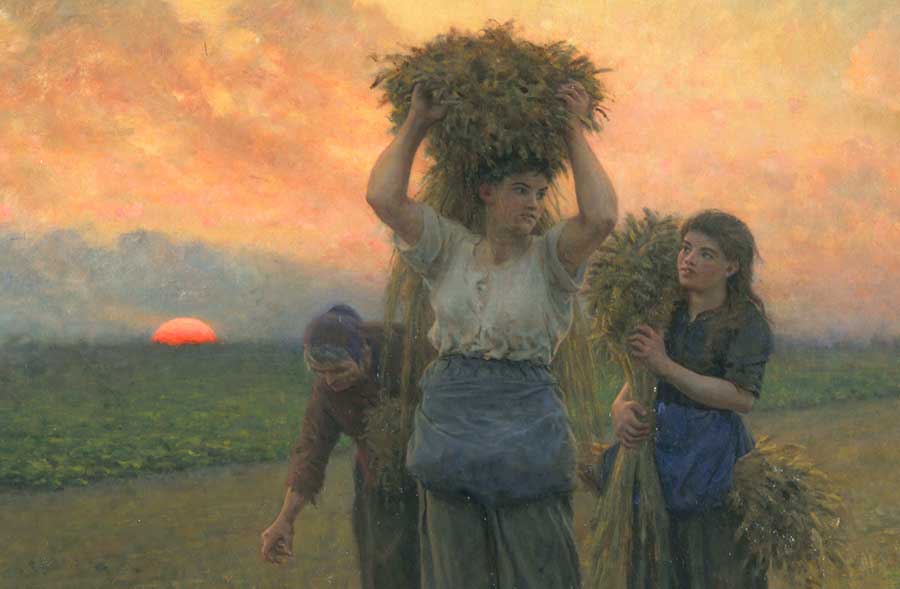 Artist Jules Breton’s choice to romanticize a scene with heartrending implications in The Last Gleanings indicates his association with Naturalism, a 19th-century artistic movement that tended to sentimentalize realistic subjects set in natural settings. Breton was not interested in gritty realism; he wanted to explore an idyllic vision of rural existence, truthful or not.

Nevertheless, Breton experienced an intimate relationship with rural life. He was born in Courrières, a village in the agriculturally rich Artois region of northern France. In 1847, he moved to Paris to join the atelier of Michel-Martin Drolling at the École des Beaux-Arts, but he abandoned his course and returned to Courrières the following year. His life in Paris was disrupted by the social revolution of 1848 that aimed to destroy vestiges of the feudal system and give voice and power to the middle and lower classes. Political scientist and historian Alexis de Tocqueville remarked, in his Recollections of the period, that “society was cut in two: those who had nothing united in common envy, and those who had anything united in common terror.” Rather than capturing the upheavals of his day, Breton preferred to present a poetic and idealized version of rural life. This approach must have appealed to his patrons who were, themselves, members of the upper classes. 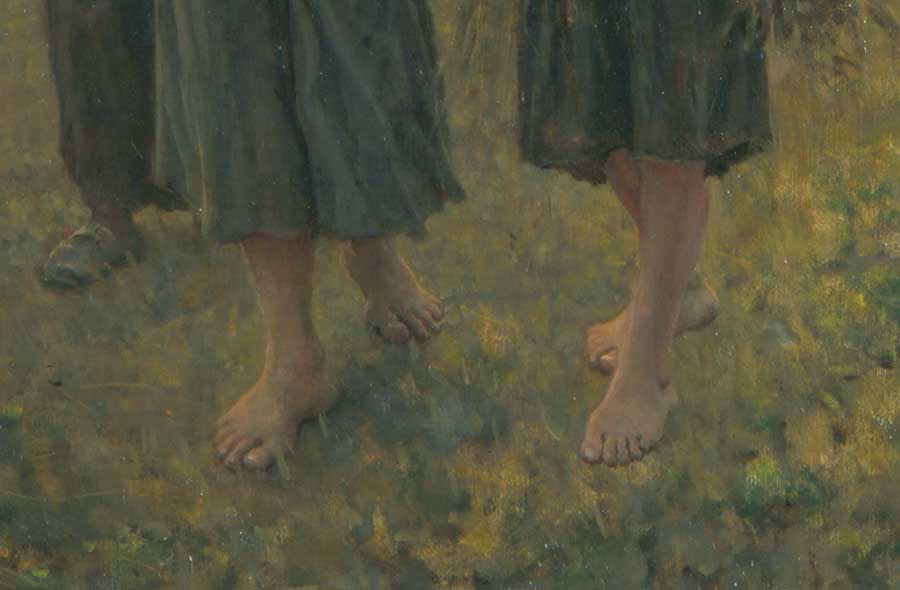 Viewers might not recognize the poverty of the female gleaners if it were not for their bare feet. Jules Adolphe Aimé Louis Breton, detail of The Last Gleanings, 1895, oil on canvas, 36 1/2 x 55 in. (92.7 x 139.7 cm.). The Huntington Library, Art Museum, and Botanical Gardens.

The American industrialist and art patron Henry Clay Frick purchased the painting for $14,000 from dealer M. Knoedler & Co. in 1895, immediately following its presentation at the Paris Salon. In a letter to Frick, Breton wrote that the painting “expresses a feeling I have frequently felt before the majestic simplicity and beauty of our rustic scenes, when bathed in the last rays of the sun. Those daughters of our fields seem then to be transfigured, the reflections of the heavens giving them the semblance of being surrounded by a natural halo.” Whether “those daughters” were needy, hungry, or homeless was not his concern.

When Frick moved to New York City in 1905—where he leased the Vanderbilt mansion down the block from where Collis P. Huntington (uncle of Huntington founder Henry E. Huntington) and Arabella Huntington (Henry’s future wife) lived on Fifth Avenue—Frick asked M. Knoedler & Co. to take the painting back. Frick’s taste in art collecting was shifting. Henry Huntington acquired The Last Gleanings from Knoedler the following year.

You can find information on thousands of paintings, drawings, prints, sculpture, and other works of art online in The Huntington's art collections catalog.

Catherine Hess is the chief curator of European Art at The Huntington.

This short art appreciation segment was interesting and thought provoking. Thank you.

"The Last Gleanings" is one of my favorite paintings at The Huntington. I return to it time and time again. Thank you for spotlighting it.

Beautiful painting . . . I'll look for it the next time I visit. One question, and from a non-farmer: The field seems close-cut by the harvest, yet the "gleanings" carried away have long stalks. Any explanation?

The Gleaning is an international phenomenon. It is still practised in many countries. This realistic painting at the Huntington gallery is an amazing experience.