New Palms Along the North Vista 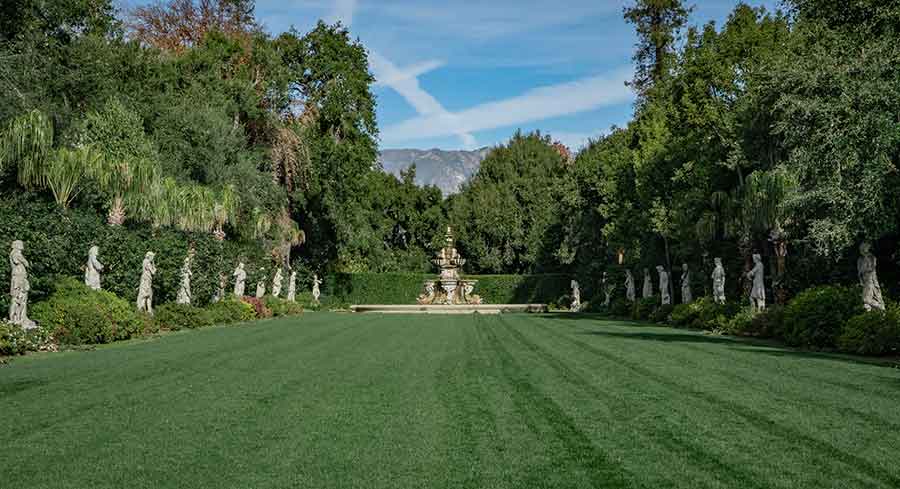 The North Vista at The Huntington, after the planting of 22 new Livistona decora palm trees. Photo by Jessica Pettengill.

The North Vista—with its stately lawn, Baroque fountain, and Henry E. Huntington's personal sculpture collection—has been an iconic location at The Huntington since its completion in the early 1900s. In Oct. 2019, 14 Livistona australis palm trees along the North Vista were replaced with new Livistona decora palms to better replicate what Huntington might have seen while looking out the windows of the mansion more than 100 years ago.

Roughly 80 years old at the time of their removal, the old palms had aged out. “This is a task that was long-deferred, but it has been on the radar for many years,” said James Folsom, the Telleen/Jorgensen Director of the Botanical Gardens. 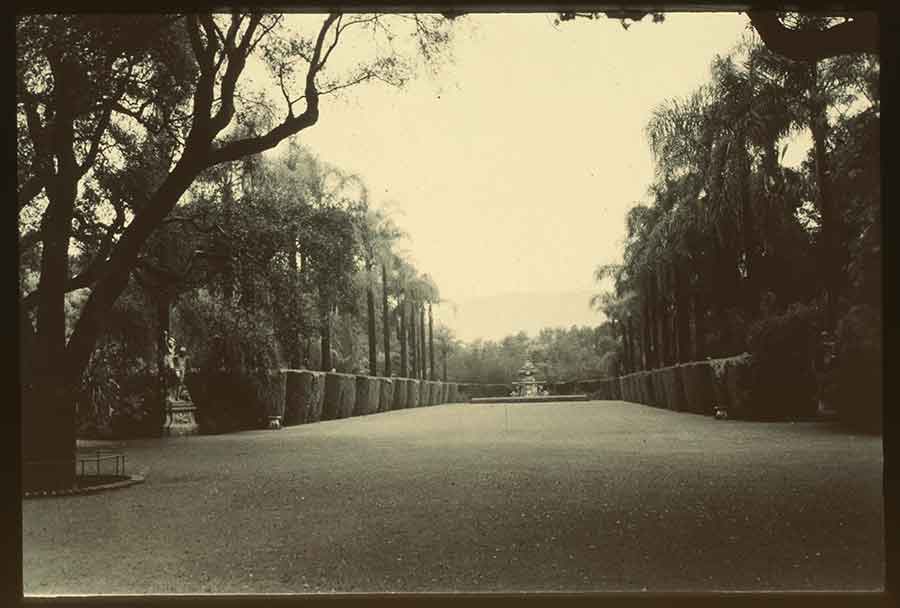 The border of palms was replaced with 22 young trees, 11 on each side of the lawn, to restore the vista’s symmetry. Seven of the east-side palms had been lost during the decades before Folsom took over as director in 1984, and the cause of their loss is unknown.

The new palms are about five years old and range from 12 to 14 feet in height. Though the new specimens are small now, they can grow to be as large as the old ones, which stood at 70 feet and weighed as much as 3,000 pounds.

Huntington arborist Daniel Goyette and his team, along with the Senna Tree Company, worked together for 10 days to complete the project, using cranes and other heavy equipment. The 22 Italian statues were protected using stainless steel mesh cages that were anchored into the sod with 3-foot-long rebar stakes. 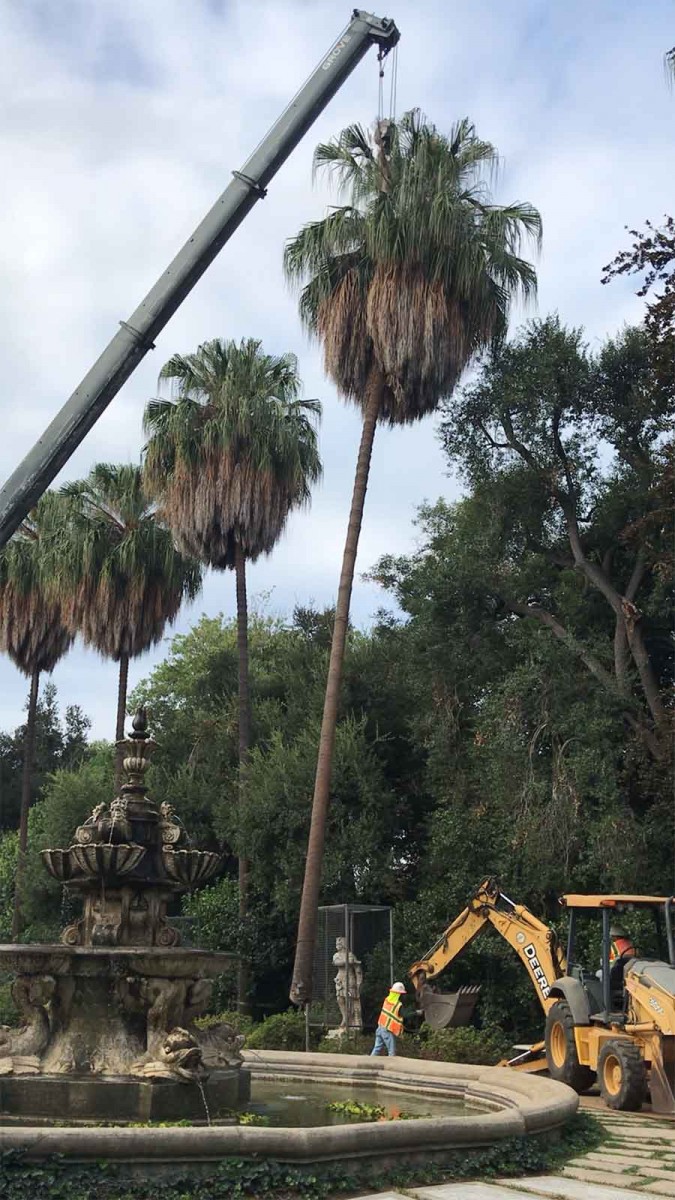 One of the 11 older, west-side palm trees that was removed by a crane and other heavy machinery in Oct. 2019. The Italian statues below the trees were protected with stainless-steel cages. Photo by Daniel Goyette.

The replanting took a toll on the North Vista’s large lawn. After construction was finished, the lawn was dug up and replaced with new sod that covered an area roughly equal to two football fields.

The old palms, like all green waste generated at The Huntington, were disposed of using a machine called a tub grinder. A tub grinder uses a large, round tub known as a hopper to grind up wood, bark, pine needles, and other plant material into mulch, compost, and other recycled landscaping materials. Eventually, the mulch made from the aging palm trees will be used throughout the gardens.

While palms are not native to Southern California, they have become emblematic of both the greater LA area and The Huntington. Henry Huntington himself was particularly interested in palms. He planted the first set of palms along the North Vista after the completion of the mansion in 1911. 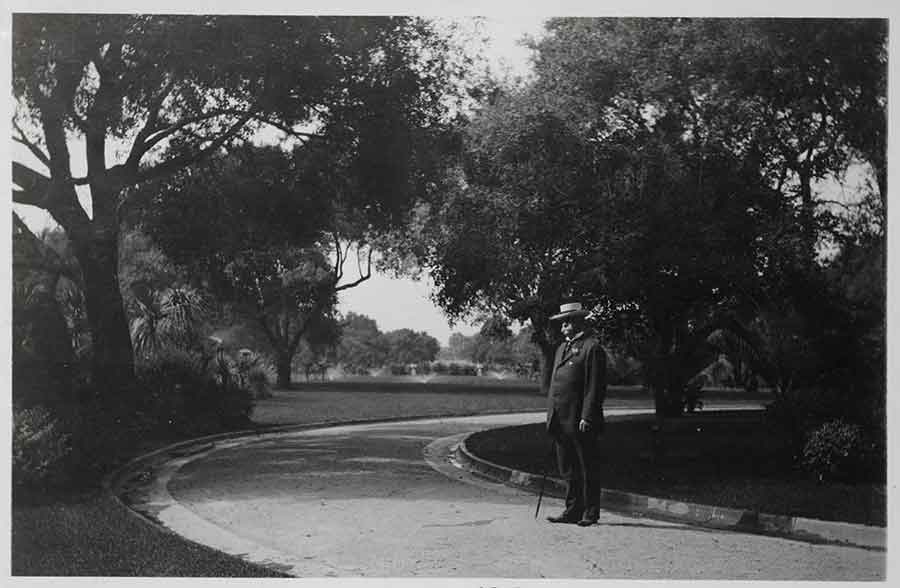 Henry E. Huntington (1850–1927), in about 1915, standing with the North Vista in the background. The Huntington Library, Art Museum, and Botanical Gardens.

Huntington’s superintendent, William Hertrich, noted in his memoir that his employer would often find an excuse to be present when tree work was in progress. “Whenever we were engaged in planting these large specimens, Mr. Huntington would watch the procedure with evident interest,” wrote Hertrich. On at least one occasion, Huntington asked for work to be delayed briefly so he could take a few photographs.

The North Vista, its statues, and its palm trees have been featured in many popular movies and television shows, including the hit NBC show “The Good Place” and Disney’s 2011 revival of “The Muppets” movie.

Although Henry Huntington is not able to photograph this latest iteration of the North Vista, the replanting of the decorative palm trees helped to restore his original vision and will continue to be an iconic view for years to come.

Jessica Pettengill is a web producer in the Office of Communications and Marketing at The Huntington.

Strengthening Bonds with Mexico Through Cryopreservation
Aug. 7, 2019 by Usha Lee McFarling
0 Comment(s)
The Huntington has taken a lead role in recent years in the cutting-edge field of plant cryopreservation ...
More