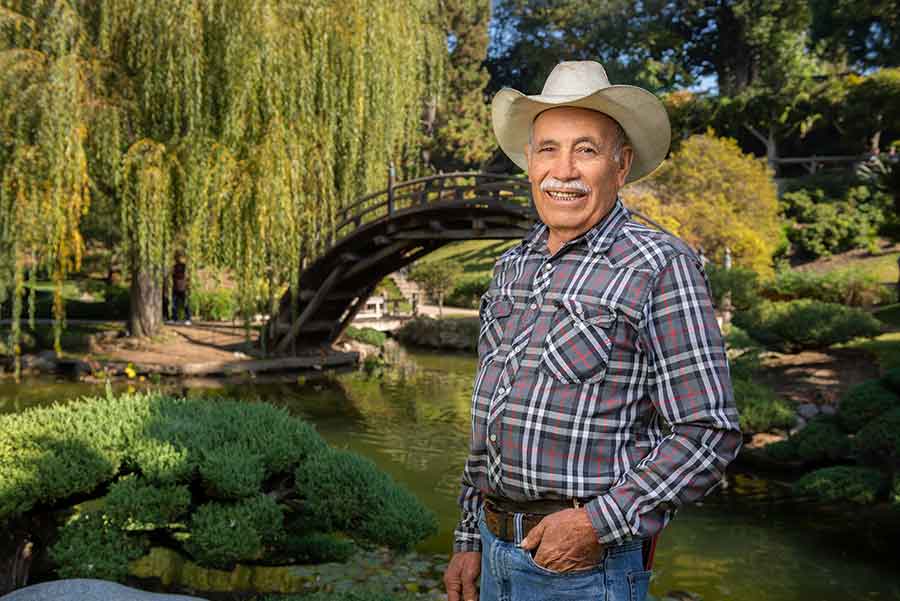 Ramiro Ramirez Pinedo, who has worked at The Huntington for 50 years, stands in his favorite place on the grounds, the Japanese Garden. Photo by Jamie Pham.

While The Huntington is celebrating its Centennial this year, it is also celebrating a very special staff member, one who has worked at the institution for a half century.

Ramiro Ramirez Pinedo, 80, started working at The Huntington in 1969. A gardener originally from Jalisco, Mexico, Pinedo got his start as a jack-of-all-trades—hoeing, weeding, and cutting lawns. "As I gained more experience, they gave me more opportunities," Pinedo said. He moved on to driving tractors, working in the garage, and fixing machinery. "I've done everything, even plumbing. I've worked in pretty much every garden." 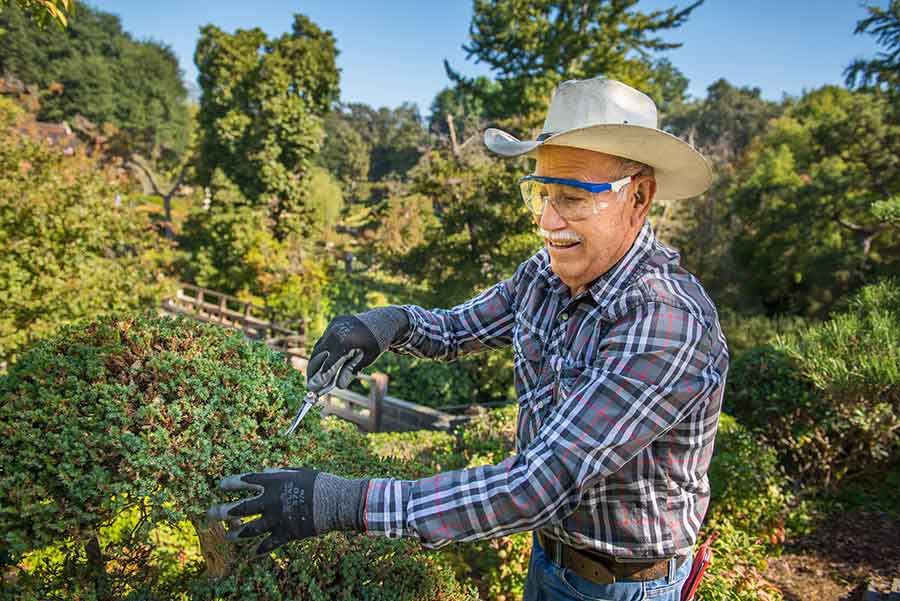 Over the years, Pinedo has honed his skill at pruning to shape the pines and junipers in the Japanese Garden. Photo by Jamie Pham.

Over time, Pinedo gravitated toward his true passion: pruning. "When you prune, it gives plants growth, life, and vigorous flowers," he said. Pinedo started his craft in the camellia collection and now focuses largely on pruning pines and junipers in the Japanese and Chinese gardens. He has learned his techniques, he said, from some of the best, including the late bonsai master Ben Oki.

In his decades at The Huntington, Pinedo has seen a lot of change. He remembers the days before leaf blowers, when fallen leaves were raked by hand. In his early days on the job, he said, the gardening staff was smaller and the gardens were more natural and less manicured. “We didn’t tend to them with the detail we do now. It really has changed.” 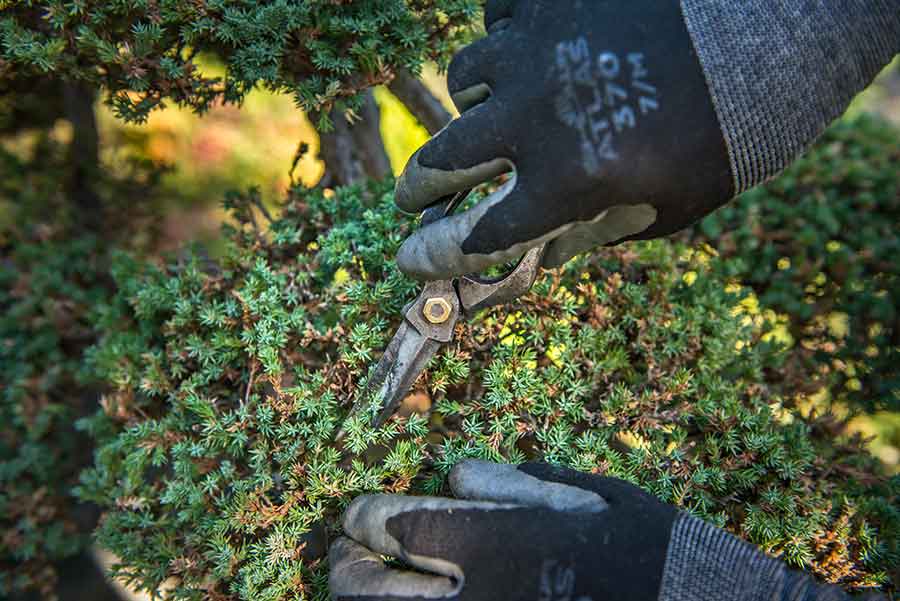 To maintain the manicured look of the Japanese garden, many plants require Pinedo’s exacting touch. Photo by Jamie Pham.

Pinedo and his wife, Aurora Pinedo, have been married for 53 years. They both, he said, often worked two jobs or double shifts to raise and support their family of three sons and two daughters, all of whom have graduated from college and have successful careers.

Pinedo’s long tenure at The Huntington was recently celebrated with a party featuring a cake emblazoned with an image of the Japanese Garden, which is a Pinedo favorite. “He came as a young man when he was 30 and stayed 50 years and became one of our greatest gardeners, and this is not the end!” said Jim Folsom, the Marge and Sherm Telleen/Marion and Earle Jorgensen Director of the Botanical Gardens. 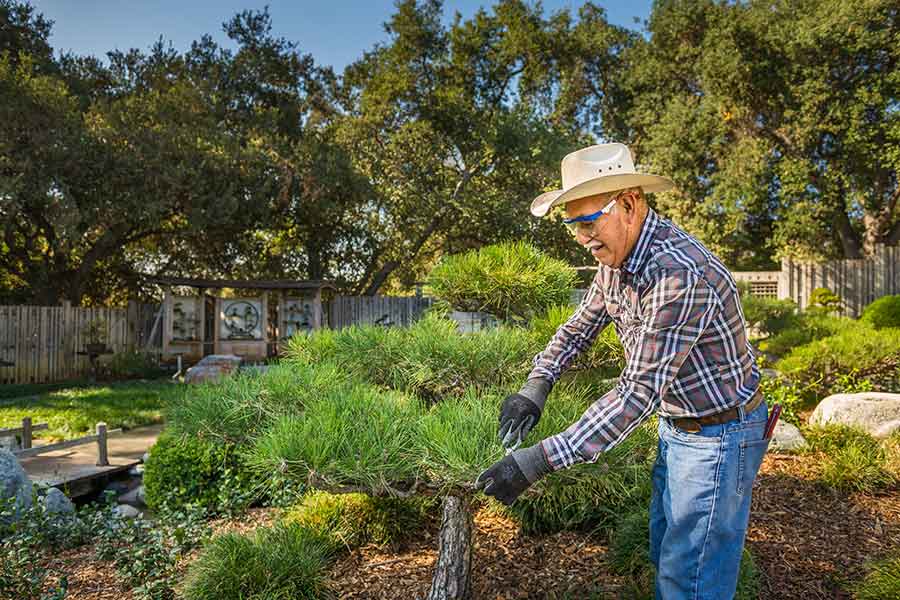 Robert Carter, director of human resources for The Huntington, noted that Pinedo joined The Huntington during the year of Woodstock and the moon landing, and he was hired before a number of current Huntington employees were born.

While he is well past retirement age, Pinedo has no immediate plans to stop gardening. “Since I was a child, I’ve loved gardening,” he said. “Even now, I still love working in a garden.”

Clara Huntington’s Lasting Tribute to Her Father
May. 27, 2020 by Suzanne Oatey
2 Comment(s)
She was the eldest of three daughters from Henry E. Huntington's first marriage and shared her father's appreciation for art, books, and the beauty of California ...
More

Mr. Pinedo reminds me of William Hertrich. Mr.Huntington would have appreciated him and his work.

A remarkable man. The Huntington has been fortunate to have Mr. Pinedo as an employee.

How awesome to hear of someone who loves his work and is so appreciated by his employer. Wonderful.

My name is Rosie and Ramiro is my wonderful father. We would like to thank you for this beautiful tribute to our father. He has taught us all through his love of nature and gardening to love it as well. Growing up The Huntington was our playground, all my most joyous childhood memories took place at The Huntington. We were exposed to art, literature and a diversity of plants, flowers and nature. Something we will always be grateful for and cherish and something we have continued to share with our own children.

We have often seen your father at the Huntington over the past 41 years (for us) and we appreciate him and the beauty he creates!

Mr. Ramiro reminds me of my Dad, John Hinojosa. Dad specialized in Japanese design, as the only Latino member of the Japanese Gardners Federation he so enjoyed his work. I think Mr. Ramiro and Dad would have got on well indeed.

Congratulations to Mr. Pinedo! How fortunate he and Huntington Gardens found one another. All the best to you and your family, Mr. Pinedo.

I very much enjoyed reading this story. I hope I get to run into Mr Pinedo in my walks.

Thanks for this tribute to a wonderful man! Ramiro not only does beautiful work, but also exudes patience and warmth. Kudos to Ramiro!

I am a reader at the Huntington Library. The beautiful gardens remind me of my Dad's work at the San Gabriel Nursery during the 1930s–1940s. Thank you, Mr. Pinedo.

Congratulations to you, Mr. Pinedo! What an accomplishment. Thank you for sharing this tribute to a very loyal Huntington Staff member.

So wonderful to read about the "heroes" of the Huntington, those who work with such joy to keep this site in beautiful order. I loved reading about Ramiro.