Fighting a War with Books 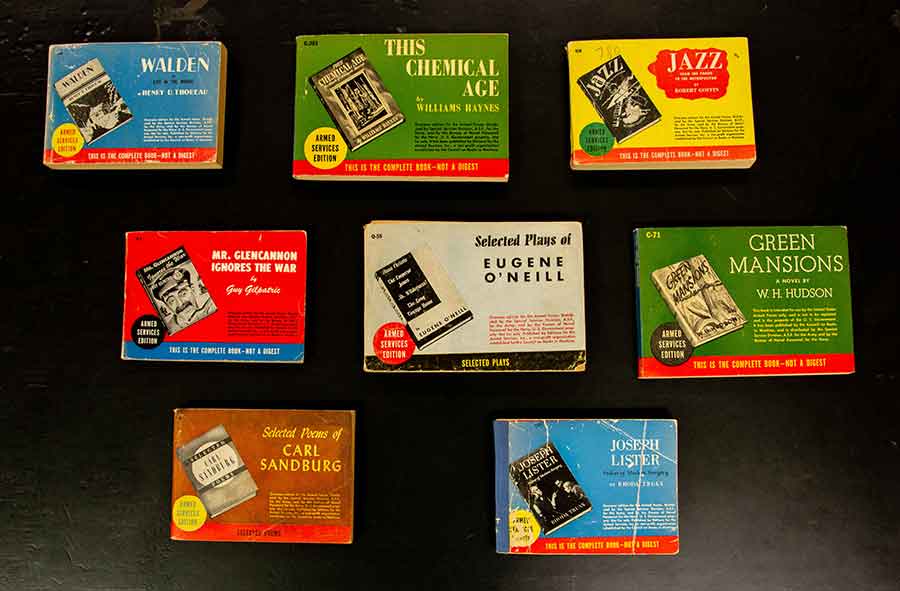 Armed Services Editions were reprints of selected works, designed and published specifically for servicemembers during World War II. They represented a wide range of genres and topics, both fiction and non-fiction. The Huntington Library, Art Collections, and Botanical Gardens. Photo by Deborah Miller.

"Books are weapons in the war of ideas." This was the motto of the Council on Books in Wartime, a consortium of publishers, booksellers, and librarians formed to utilize the power of books to advance the war effort of the United States during World War II.

As the American war machine gathered steam, it sought not only to supply food, uniforms, and ammunition, but to boost morale. Many servicemembers found themselves away from home for the first time.  They suffered from loneliness, homesickness, and boredom. Long stays on board ships or at distant posts included few recreational activities. Books were portable entertainment. They could be read anywhere—at sea, in a bunk, or in a foxhole. 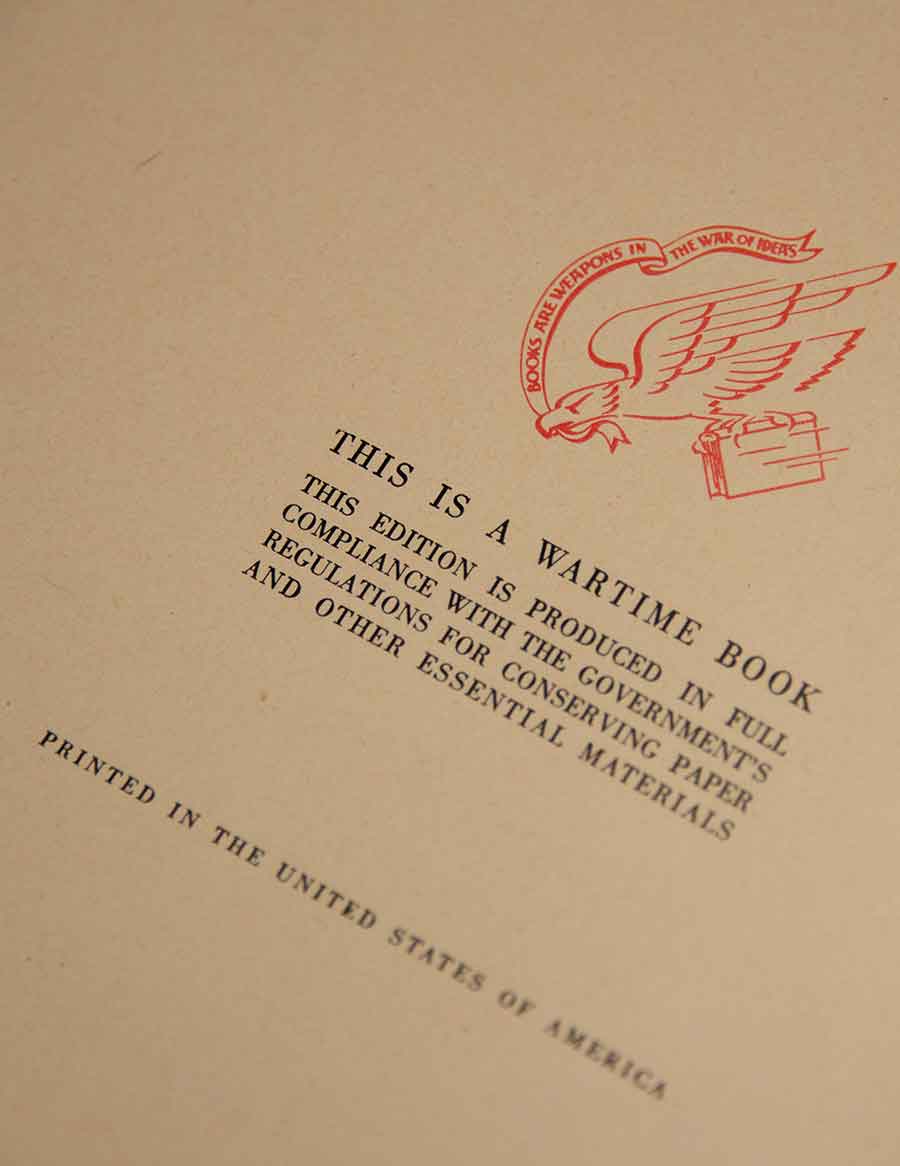 The logo of the Council on Wartime Books included their motto: “Books are weapons in the war of ideas.” The Huntington Library, Art Collections, and Botanical Gardens. Photo by Deborah Miller.

The promotion of books was also a reaction against the famous Nazi book burnings, notably those that took place on May 10, 1933. Book burning symbolized censorship and the suppression of free thought. Americans were fighting a war of ideology, a “war of ideas,” as much as a war of weapons on land and sea. Reading was therefore a patriotic act for a U.S. soldier. It symbolized the fight against totalitarianism and the celebration of free speech, which was constitutionally protected in the United States.

Early efforts focused on collecting donated books to distribute to servicemembers through the Victory Book Campaign. But after initial successes, donated books proved inefficient, especially overseas. Such donated volumes as children’s books, for example, were inappropriate for servicemembers. Many donated books were also too heavy. When a solider on the ground in Europe or the Pacific was whittling his pack down to necessities, thick, hardbound books didn’t make the cut. The Council’s solution was the Armed Services Edition. 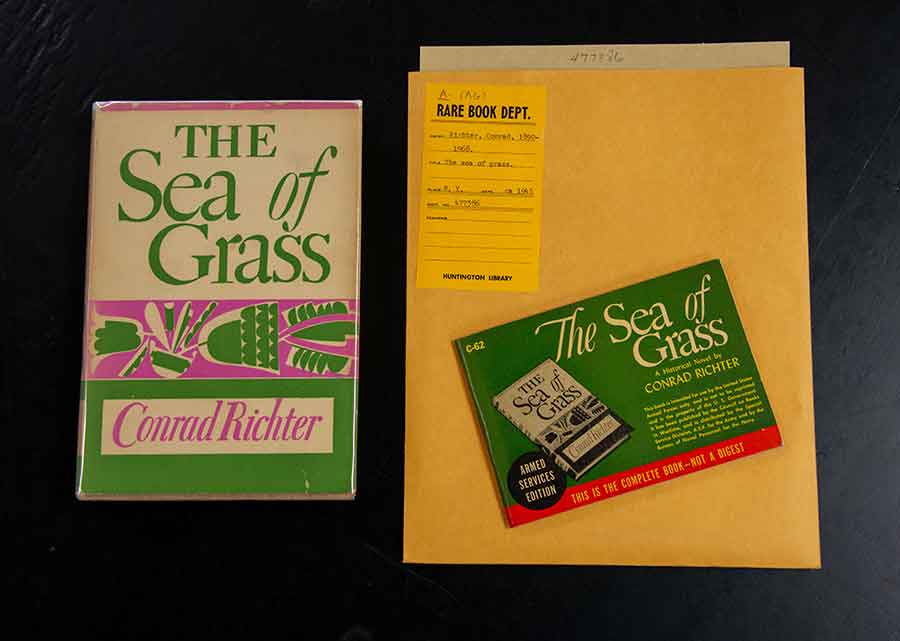 The colorful original cover artwork of Conrad Richter’s Sea of Grass (left) is reproduced in monochrome on the cover of the standard layout of the Armed Services Edition of the same work (right). The Huntington Library, Art Collections, and Botanical Gardens. Photo by Deborah Miller.

Armed Services Editions were reprints of selected works, designed and published specifically for servicemembers. Averaging just six cents per copy, these editions allowed the War Department to purchase books that were inexpensive and tailored to their needs. The design was standard, featuring the author and title, as well as a reproduction of the original hardcover dustjacket. The Council’s War Book Panel selected a variety of titles that would appeal to all interests, while inherently representing the values at stake and the purpose of the war.

The Huntington holds more than a dozen of these Armed Services Editions acquired from a variety of sources. Some came with other collections, such as The Odyssey of Homer, newly translated into English prose by T. E. Shaw (better known as T. E. Lawrence or Lawrence of Arabia), which The Huntington acquired in Edwards Metcalf’s Lawrence collection. At least one of the books was donated directly by publisher Alfred A. Knopf in 1944, with the request that it not be exhibited until after the war, lest civilians “suffer from the itch to acquire them and all kinds of troubles . . . ensue.” 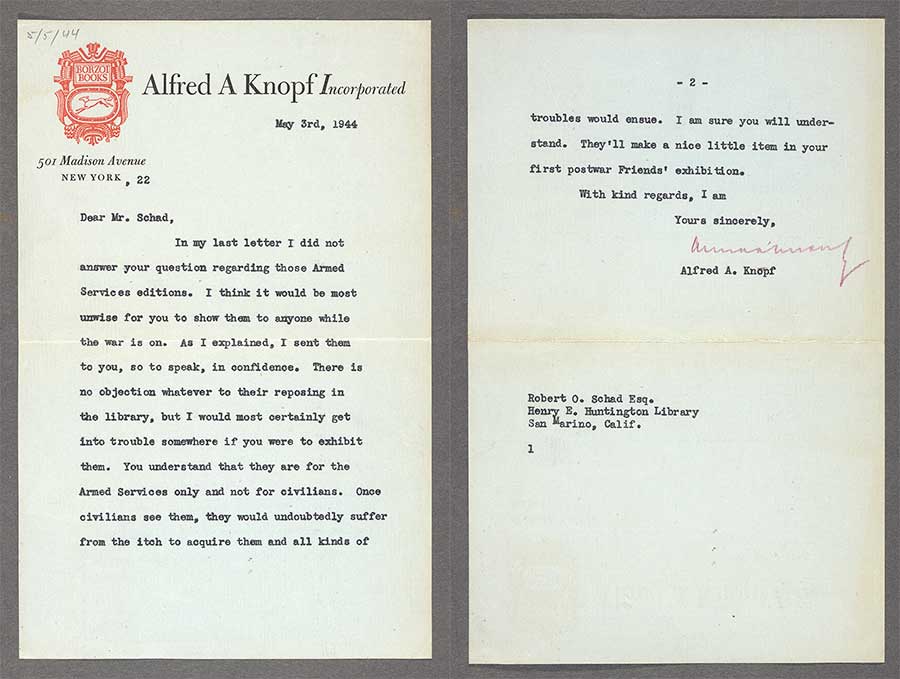 In this letter to Curator of Rare Books Robert O. Schad, the publisher Alfred A. Knopf requests that the Armed Services Editions sent to the library for the collection not be exhibited, lest civilians “suffer from the itch to acquire them.” The Huntington Library, Art Collections, and Botanical Gardens.

The Huntington’s volumes represent the wide range of genres and topics typical of the Armed Services Editions, from biography and westerns to short stories and poetry. Servicemembers found familiar faces in the escapades of Guy Gilpatric’s irascible ship’s engineer Mr. Glencannon or the trials of the sailors of Marcus Goodrich’s Delilah. Books like Isherwood’s Prater Violet explored the rise of Nazism through a light and satirical tale of the movie industry.

Non-fiction works, such as Williams Haynes’ This Chemical Age: the Miracle of Man-made Materials, encouraged education and practical sciences. Other books celebrated American history, culture, and thought, such as Maxwell Struthers Burt’s history of Montana and Wyoming, Powder River: Let’er Buck and Thoreau’s classic of transcendentalism, Walden. Some, like the humorous books of James Thurber, provided simple escapism. 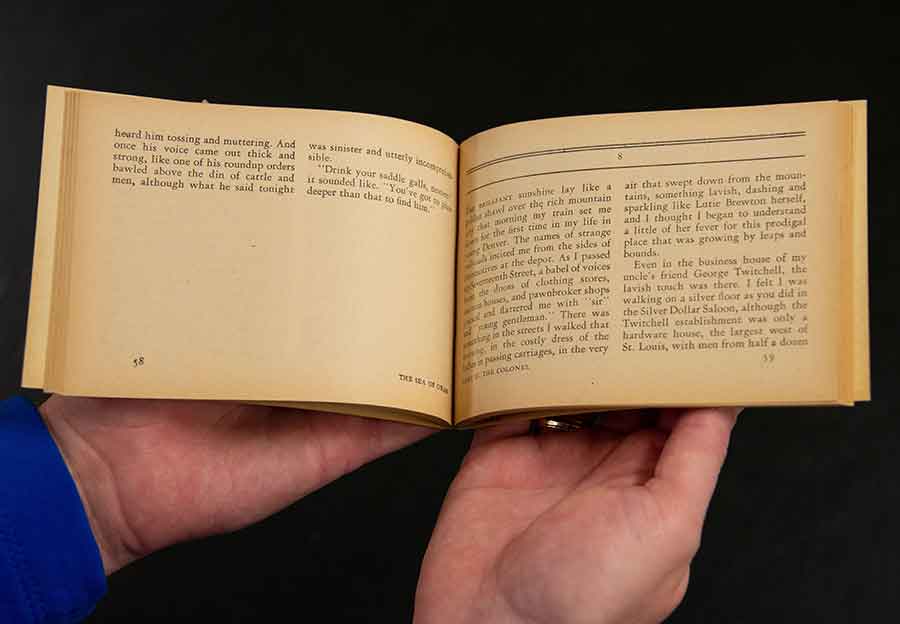 Unlike traditionally published books, Armed Services Editions were printed in four columns across a horizontal layout. This was thought to make them easier on the reader’s eyes. The Huntington Library, Art Collections, and Botanical Gardens. Photo by Deborah Miller.

Each Armed Services Edition was pocket-sized, and most were roughly 4 by 5 ½ inches, slim, and no more than 3/4 of an inch thick. They were paperbacks, printed horizontally in four columns on lightweight paper. The shorter line length of the four columns was believed to be easier on the eyes of a weary reader. The books were produced in monthly series to provide new material regularly, with the list of series titles printed in the back.

The first series included 50,000 copies each of 30 titles, but the program quickly took off. Armed Services Editions were often passed from person to person and read many times over. Stories that made servicemembers laugh or reminded them of home were particular favorites. Production grew from 50,000 copies per title to as many as 155,000 copies per title. Between September 1943 and June 1947, 1,322 titles were published in 46 series—more than 122 million books in all. 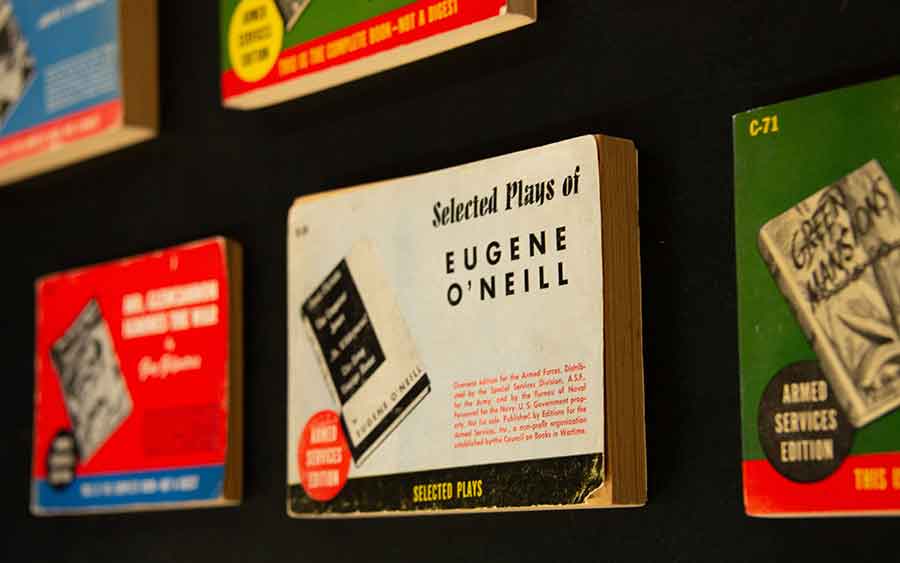 The “serious” titles selected for the Armed Services Editions, such as the selected plays of celebrated playwright Eugene O’Neill, influenced the popularity of paperback books in genres other than dime-store fiction after World War II. The Huntington Library, Art Collections, and Botanical Gardens. Photo by Deborah Miller.

The impact of the Armed Services Editions lasted well beyond the war. They created lifelong readers and learners, many of whom would take advantage of the GI Bill to pursue further education. They also revolutionized the publishing industry, popularizing paperback books beyond mere drugstore dime novels.