Guardians of the Spirit 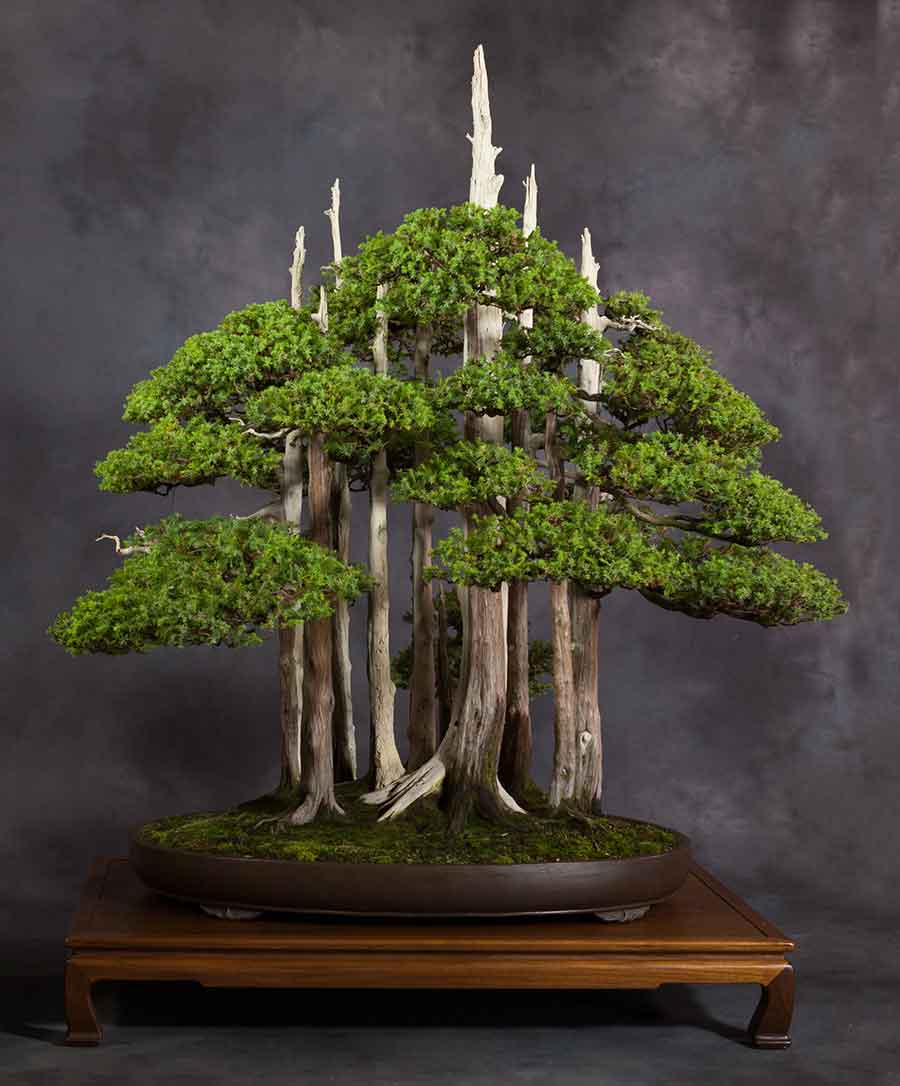 John Naka’s bonsai masterpiece “Goshin” (Guardian of the Spirit) is the centerpiece of the National Bonsai & Penjing Museum’s John Y. Naka North American Pavilion in Washington, D.C. But the roots of “Goshin” are firmly planted in Southern California soil, and it has a special connection to The Huntington. Photo courtesy of the U.S. National Arboretum.

Ask any bonsai aficionado to name the most famous bonsai in North America, and the answer will almost certainly be "Goshin." Indeed, it is one of the most widely recognized examples of the art form in the world. A masterpiece begun in 1958 by the legendary bonsai master John Naka (1914–2004), "Goshin," or Guardian of the Spirit, is a forest-style planting of 11 Chinese junipers (Juniperus chinensis). Each tree represents one of Naka's grandchildren. The upright trunks and outstretched branches evoke a sense of hope in the promise of the future.

Naka donated “Goshin” to the National Bonsai Foundation in 1984 for permanent display at the National Bonsai & Penjing Museum in Washington, D.C., located on the grounds of the U.S. National Arboretum. In a letter to the Foundation, Naka wrote that he felt “honored and proud” that his work would reside in the nation’s capital where it would be viewed by many people, bonsai experts and neophytes alike. He expressed a wish that it would inspire others and “encourage the future generation to look upon this living art with pride.” And so it has. When more than 200,000 annual visitors enter the museum’s John Y. Naka North American Pavilion, “Goshin” is the first bonsai they see. 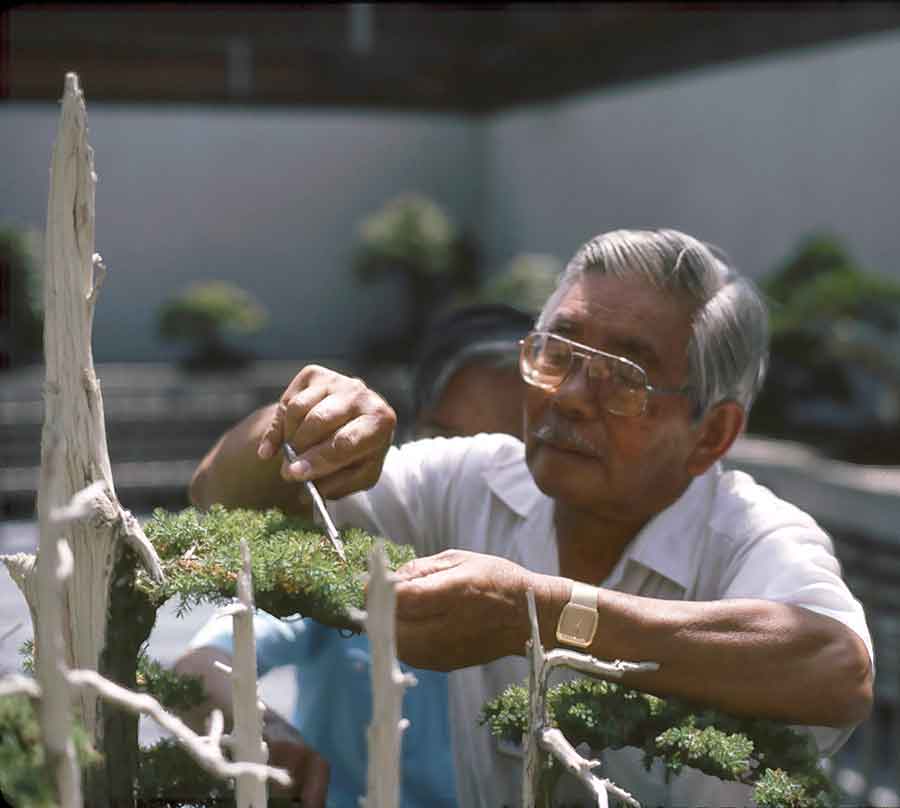 John Naka tends to “Goshin” in 1986 at the National Bonsai & Penjing Museum. Photo courtesy of the U.S. National Arboretum.

“John came to Washington every year to work on those trees,” said Jack Sustic, former curator of the National Bonsai & Penjing Museum. After Naka’s death, his majestic living forest was entrusted to Sustic’s care.

But the roots of “Goshin” sprang from Southern California soil. Naka, a Nisei (second generation) Japanese American, spent most of his adult life in the Los Angeles area, raising his family and making a name in the world of bonsai while teaching and promoting the art. Juniper specimens acquired in the region, painstakingly nurtured and trained for decades, were transformed into a verdant forest under his patient touch. And the earliest acclaim for “Goshin” came during bonsai exhibitions at local venues such as The Huntington—events organized by the California Bonsai Society, a group that Naka helped found. So, when his masterpiece departed its home turf for a new life in Washington, D.C., the California bonsai community mourned the loss. 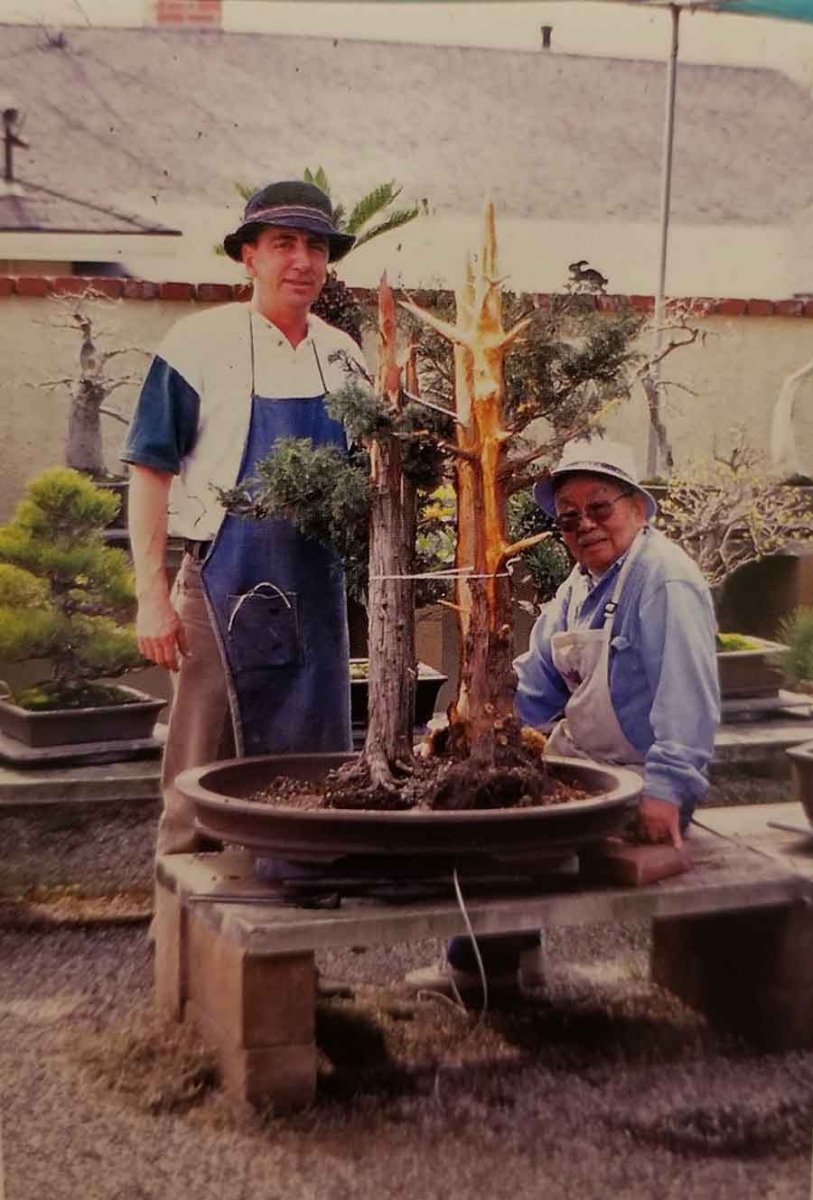 Jack Sustic (left) assisted John Naka (right) in replicating his famous bonsai, “Goshin,” in 2000. An earlier replica of "Goshin" had been planted in 1999. Photo courtesy of Jack Sustic.

Enter “Goshin II” and “Goshin III.” Naka’s students and fellow bonsai artists clamored for him to recreate his famous work, recalls Ted Matson, curator of the bonsai collection at The Huntington, who studied under Naka himself. The master was happy to oblige. “At a bonsai convention in 1999, Naka created the first of two replicas, known as ‘Goshin II.’ A second replica, ‘Goshin III,’ followed in 2000,” said Matson. “The plantings were subsequently given to the two collections of the Golden State Bonsai Federation: one housed at the Bonsai Museum at Lake Merritt in Oakland, California, and the other here at The Huntington.” “Goshin III” arrived at The Huntington in 2001 and was displayed for more than a decade in the Japanese Garden’s Bonsai Court.

Matson joined The Huntington’s staff in 2015 to oversee the more than 400 world-class trees that make up the bonsai collections housed here. One of his first priorities as the caretaker of these living artworks was to do a comprehensive survey of their condition. He found that “Goshin III” wasn’t thriving; several of the forest’s trees had died, and others were weakened by degraded soil. Matson made the decision to disassemble the planting so that the individual trees could be nurtured back to health. A selection of replacement candidates for the trees that had been lost joined the others in the nursery, to be carefully tended until the time was right to replant “Goshin III.” That time has now arrived. 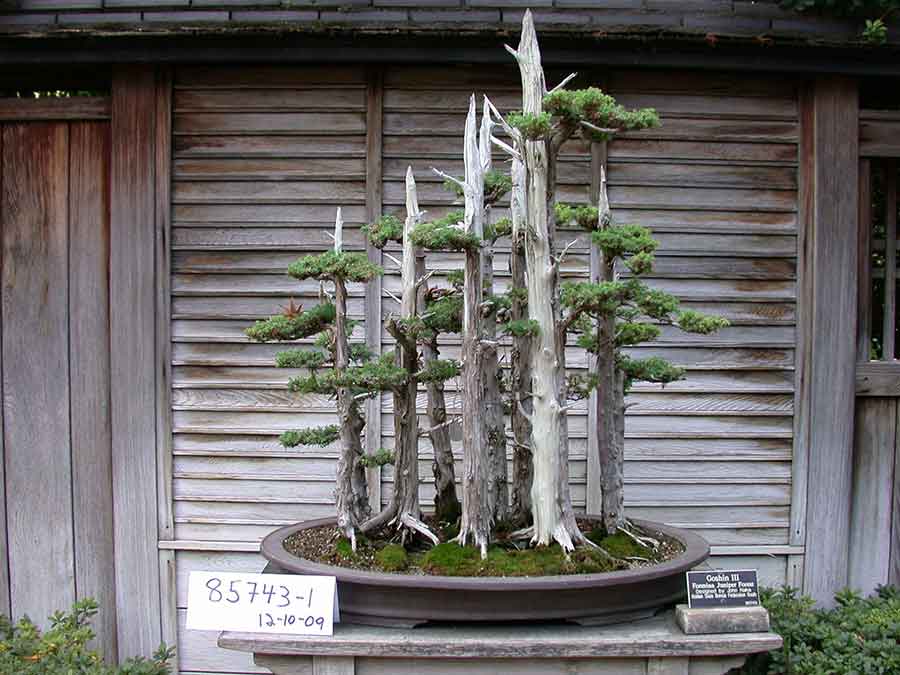 “Goshin III,” one of two replicas Naka created, in a photo taken in The Huntington’s Bonsai Court in 2009.

Naka’s “Goshin III” will be replanted in a public demonstration on Saturday, March 23, during the 62nd annual California Bonsai Society Show at The Huntington. At Matson’s invitation, Sustic, who retired in 2016 as curator of the National Bonsai & Penjing Museum, will lead the team. Both men knew that the most important goal of the replanting was to retain the spirit of Naka’s work. Said Matson, “In remaking the planting, my concern was that an artist would exercise too much ego and try to change things. I felt Jack would be perfect because he has an intimate knowledge of all the 'Goshin' plantings. I knew he would approach this with the right attitude.”

For Sustic, traveling 2,300 miles to spend an afternoon replanting a bonsai was an easy decision; he still feels a deep, personal connection to the “Goshin” trees and their creator. “While I was curator in Washington, I considered myself a steward of the collection, and it was very important to honor the original artist’s design intent,” explained Sustic. “For me, replanting ‘Goshin III’ is a continuation of John’s work. It’s our hands recreating his work. Much like restoring a priceless work of art, the intent is not to change it but to honor it.” 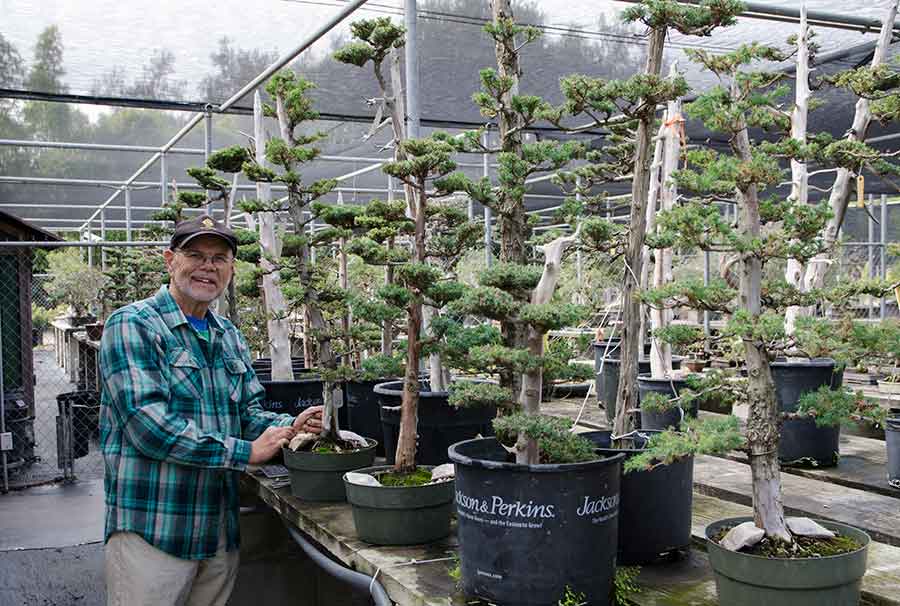 Ted Matson, curator of the bonsai collections at The Huntington, disassembled the ailing “Goshin III” in 2015 and has been nursing the individual trees back to health. The work will be replanted during the California Bonsai Society’s annual show at The Huntington the weekend of March 23–24. Photo by Lisa Blackburn.

Visitors can watch the replanting of “Goshin III” on Saturday, March 23, from 1 to 4 p.m., during the California Bonsai Society’s annual show, on view in The Huntington’s Brody Botanical Center. All exhibitions and activities are included with Huntington admission. The demonstration takes place in the auditorium, located on the lower level. While you are here, be sure to make the trek up to the Japanese Garden’s Bonsai Courts, where additional bonsai works by John Naka and other masters of the art are on permanent display.

Will Goshin III be replanted in March of 2020? The article did not specify.