Enrique Martínez Celaya (b. 1964) began his formal training in art at the age of 12 as an apprentice to a painter, but it was not until many years later, while he was pursuing a doctorate in physics, that he decided to embark on an art career. Since then, major institutions around the world have exhibited and collected his work. Three pieces by Martínez Celaya—who is an author, poet, philosopher, and scientist—are now on view at The Huntington.

The installation of the bronze sculptures The Landmark and The Gambler, in the garden on the north side of the Virginia Steele Scott Galleries of American Art, and the painting The Crown, in the Huntington Art Gallery, mark the beginning of a multiyear visual arts partnership with Martínez Celaya. The extraordinary range of the artist’s interests—which include literature, art theory, and history—make him an ideal match with The Huntington’s collections. His figurative artworks echo those from earlier times on display in the galleries and on the grounds. 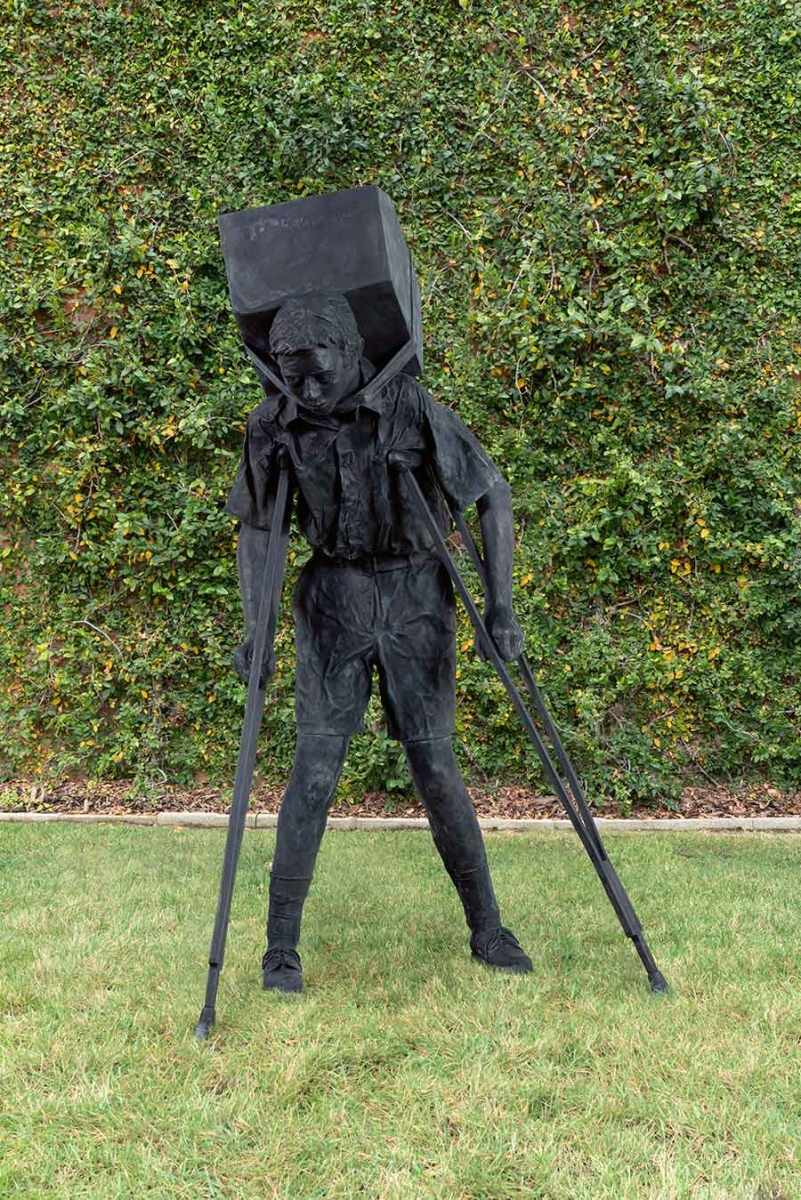 Catherine Hess, The Huntington’s chief curator of European art, first saw Martínez Celaya’s work when a New York gallerist suggested she visit his Culver City studio. “I was stunned by the quality of the work and his intellectual process,” Hess recalls. Shortly after that visit in February 2017, the artist became the first person to hold the position of Provost Professor of Humanities and Arts at the University of Southern California. In this role, he works across disciplines and blurs the line between art and scholarship. “All of a sudden, a partnership made sense,” says Hess.

Born in Cuba and raised in Spain and Puerto Rico, Martínez Celaya has said his work concerns the “existential condition of belonging.” The Gambler depicts a life-size boy on crutches carrying a house on his shoulders. He carries the idea of home and identity with him, resolved to bring it with him into the future. The boy’s clothing and home are non-specific in terms of space and time, and hence universal. 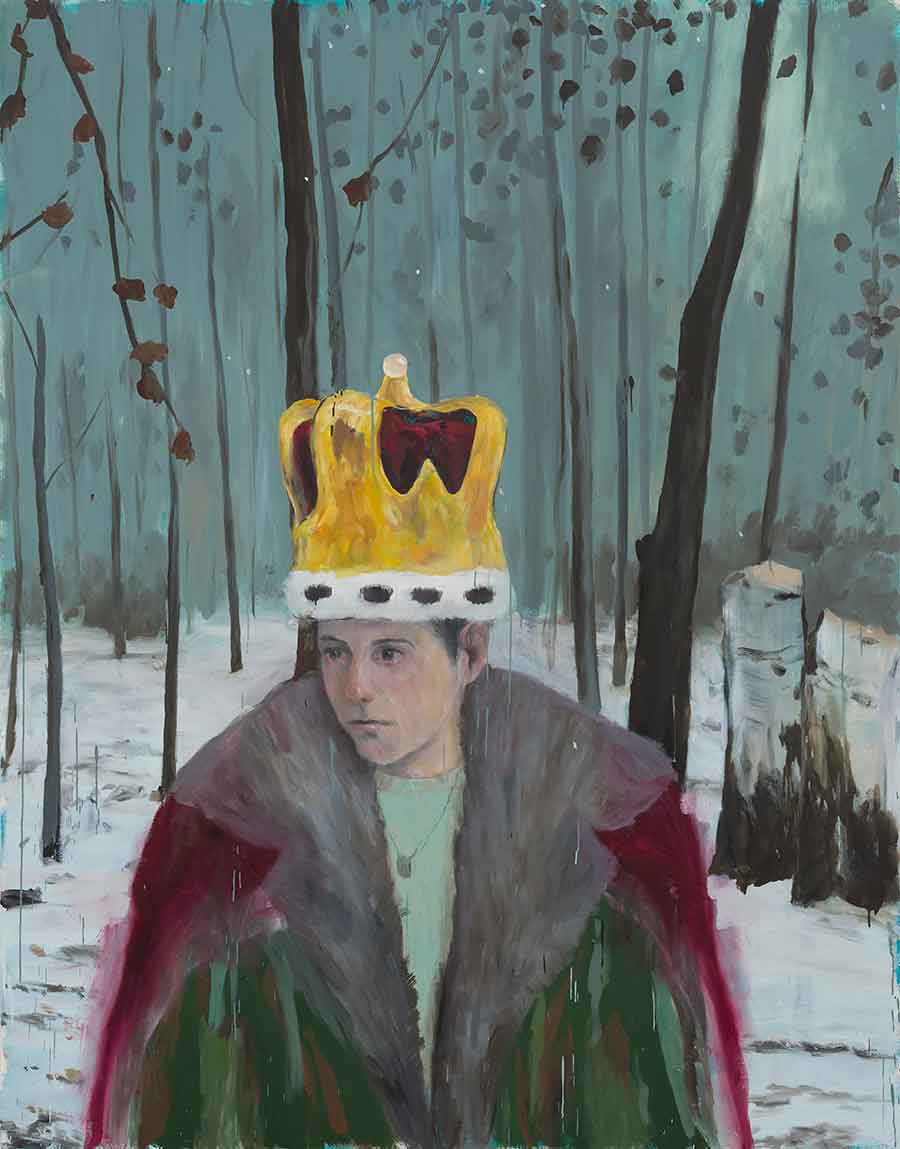 The Landmark, a large-scale head of a boy tilted on one ear with eyes closed (the artist’s son served as the model), suggests the process of reminiscing and imagining. The title refers to the sculpture as a “marker” on the landscape, pointing out how the natural setting around the work is an active participant in its content.

The Crown is an eye-catching painting, situated dramatically on the second floor of the mansion, at one end of the long central hallway, opposite Jean-Antoine Houdon’s 1782 bronze statue of Diane chasseresse (Diane the Huntress) at the other end. In this thought-provoking work, Martínez Celaya depicts a young boy wearing a crown and standing alone in a snowy birch forest. In the distance, a glow that may be moonlight enhances both the beauty of the scene and the solitude of the landscape. Does the image represent a fable or a fairy tale? 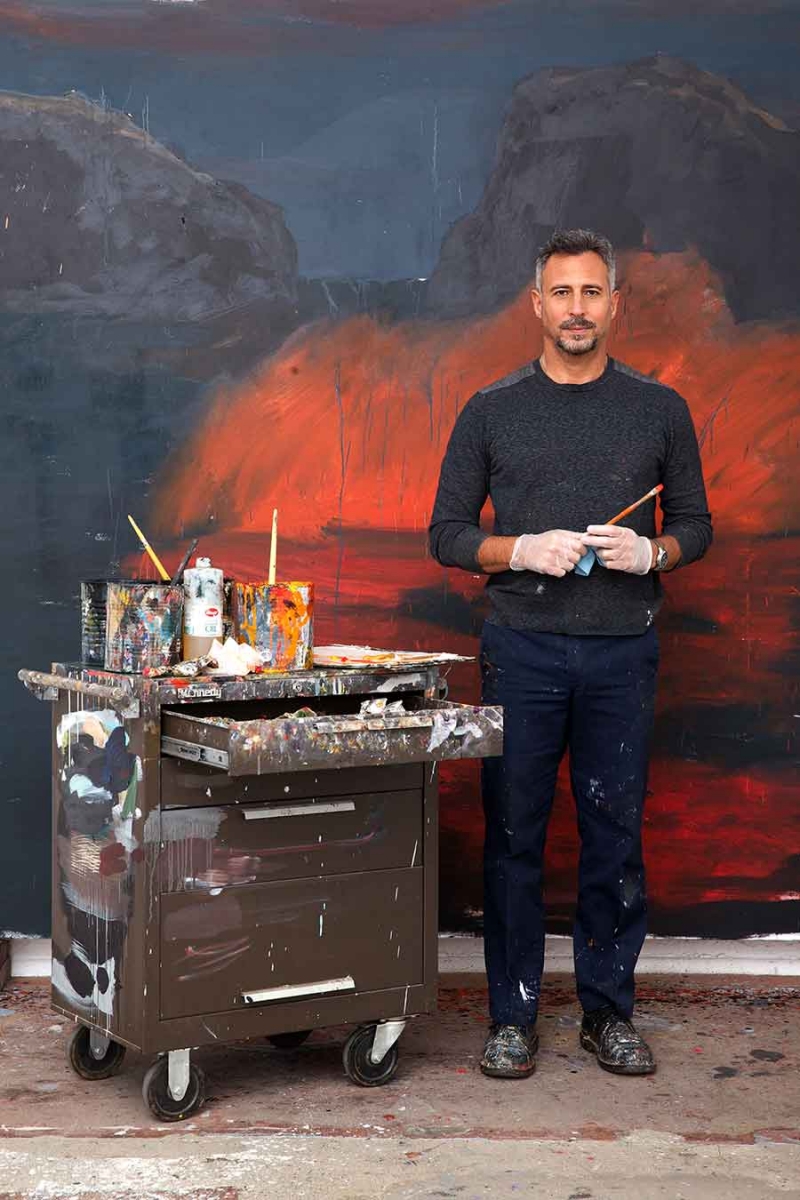 Photo of Enrique Martínez Celaya in his studio, Culver City, Calif. Photo courtesy of the artist.

Martínez Celaya’s fellowship at The Huntington, which runs from July 2019 to June 2021, will include a variety of presentations for specialized audiences and the public involving the artist’s own practice and the rich collections at The Huntington. “I can’t wait to see what he produces during his time here,” says Hess.

“The Crown” is on view in the Huntington Art Gallery until later this spring.

“The Gambler” and “The Landmark,” on view in the Dorothy Collins Brown Garden north of the Virginia Steele Scott Galleries of American Art, are on long-term loan to The Huntington.

Support for Martínez Celaya’s fellowship at The Huntington was provided by the Perucca Family Foundation.

Must see this Beautiful work of art.

I’d love if y’all could arrange for an “evening with the artist Enrique Martinez Celaya” where he shows more and talks about his work. Please keep me posted if you do so.