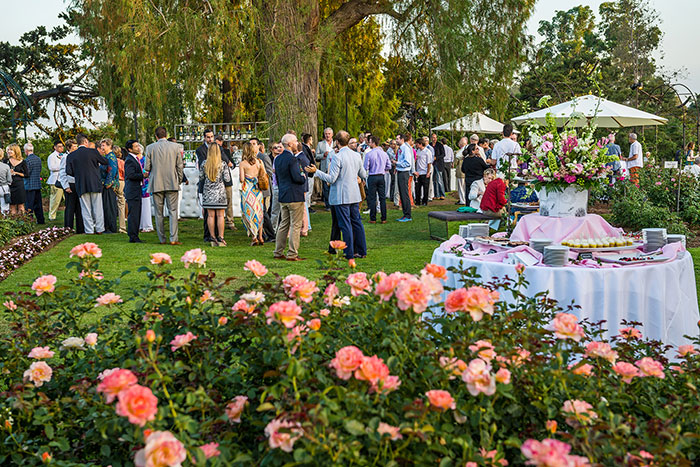 “An Evening Among the Roses in Wonderland” is The Huntington’s fifth annual garden party celebrating the contributions of LGBTQ artists, scholars, donors, and staff to the institution and the community. Photo by Jamie Pham.

The Huntington kicks off Pride Month on Friday, June 8, from 7:00 to 9:30 p.m. with “An Evening Among the Roses” the fifth annual garden party celebrating the vital contributions of LGBTQ artists, scholars, donors, and staff to the institution—and to the community. The theme of this year’s event is “In Wonderland.”

Lewis Carroll’s “Wonderland” is a place where different is normal, and where wondrous, remarkable, and fabulous things happen every day. The event will celebrate differences and highlight the recent 150th anniversary of Carroll’s Alice in Wonderland. The Huntington is one of the few libraries that owns both the suppressed 1865 version and the official publication of 1866. The Huntington’s copy bears the autograph of George Dalziel, the engraver of the illustrations that will be represented throughout the Rose Garden during the event.

We have invited Natalie Russell, assistant curator of literary collections at The Huntington, to share with us her take on Lewis Carroll and items in our collections related to him and his work. 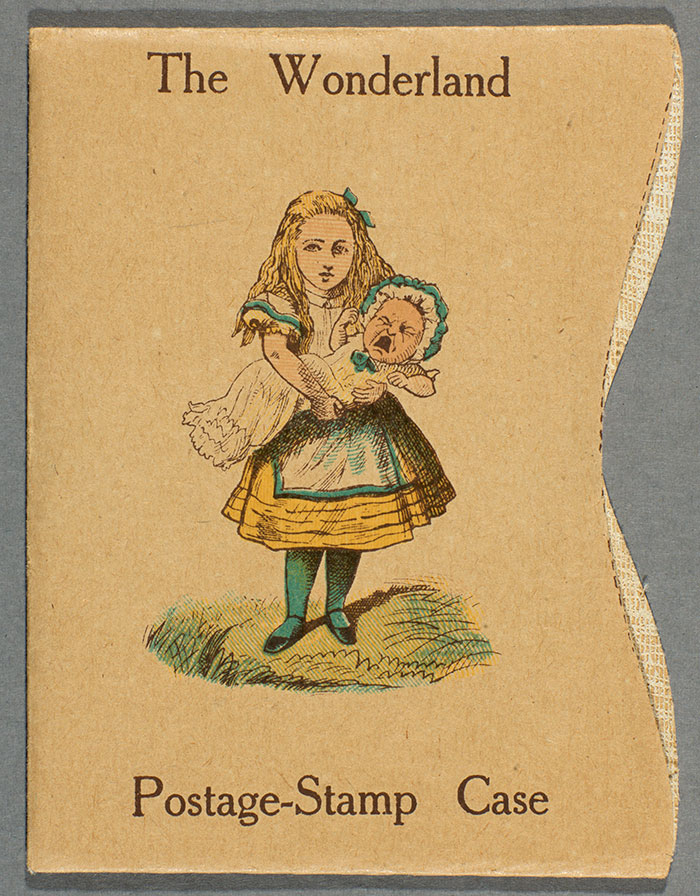 The Wonderland Postage Stamp Case features Alice holding a baby and a piglet respectively, alluding to a well-known Wonderland episode in which a baby changes into a pig. Carroll, Lewis, 1832–1898. The “Wonderland” postage-stamp-case. Oxford, Emberlin and son, [1908?]. The Huntington Library, Art Collections, and Botanical Gardens.

“The time has come,” the Walrus said, “To talk of many things: Of shoes—and ships—and sealing-wax— Of cabbages—and kings— . . .”

—Lewis Carroll, from “The Walrus and the Carpenter,” in Through the Looking-glass, and What Alice Found There

Lewis Carroll’s works are some of the most quoted in the English language, trailing only the works of Shakespeare and the Bible. From his beloved story of a little girl who falls down a rabbit hole, to the poetic saga of the search for the mysterious Snark, his words and wisdom are part of our lexicon. The man behind the wonder is not as well known.

“Who in the world am I? Ah, that’s the great puzzle.” —Lewis Carroll, Alice’s Adventures in Wonderland 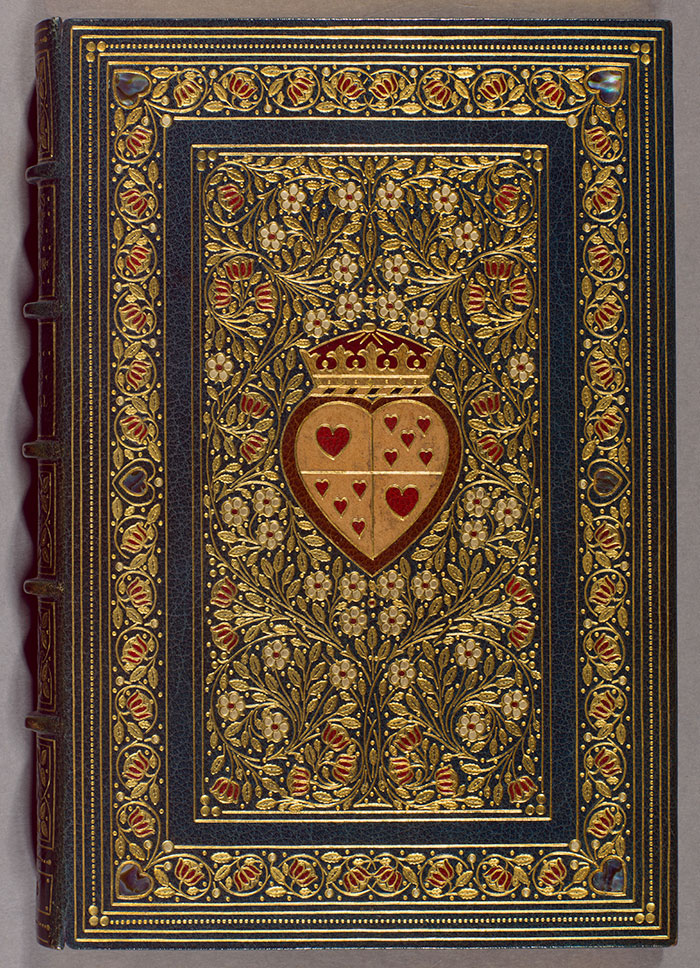 The splendid collector’s binding of this 1866 edition of Alice’s Adventures in Wonderland designed by Sangorski & Sutcliffe features hearts of mother-of-pearl in the corners. Lewis Carroll, 1832–1898. Alice’s Adventures in Wonderland. London: Macmillan and Co., 1866. First edition published in England. This is a 20th-century collector’s binding by Sangorski & Sutcliffe. The Huntington Library, Art Collections, and Botanical Gardens.

Charles Lutwidge Dodgson (1832–1898) was a mathematician, a talented photographer, an Oxford don, and a cleric. He was about six feet tall, slim, deaf in one ear, and spoke with a stammer. He never married and never had children. Fond of puzzles, he adroitly transmuted his names, Charles Lutwidge, into Latin (Carolus Ludovicus) and back again to English (Carroll Lewis) to create his famous pen name: Lewis Carroll.

The Huntington’s holdings of verse, photographs, letters, and first editions by Dodgson provide a window into the world of this curious man. They touch on his many interests, especially in mathematics and literature, but also in science, politics, and sports. One notable item is a rare copy of the infamously recalled first edition of Alice’s Adventures in Wonderland, as well as correspondence about the debacle. Printed in 1865, the edition was condemned by the author and illustrator for the “disgraceful” quality of the printing. 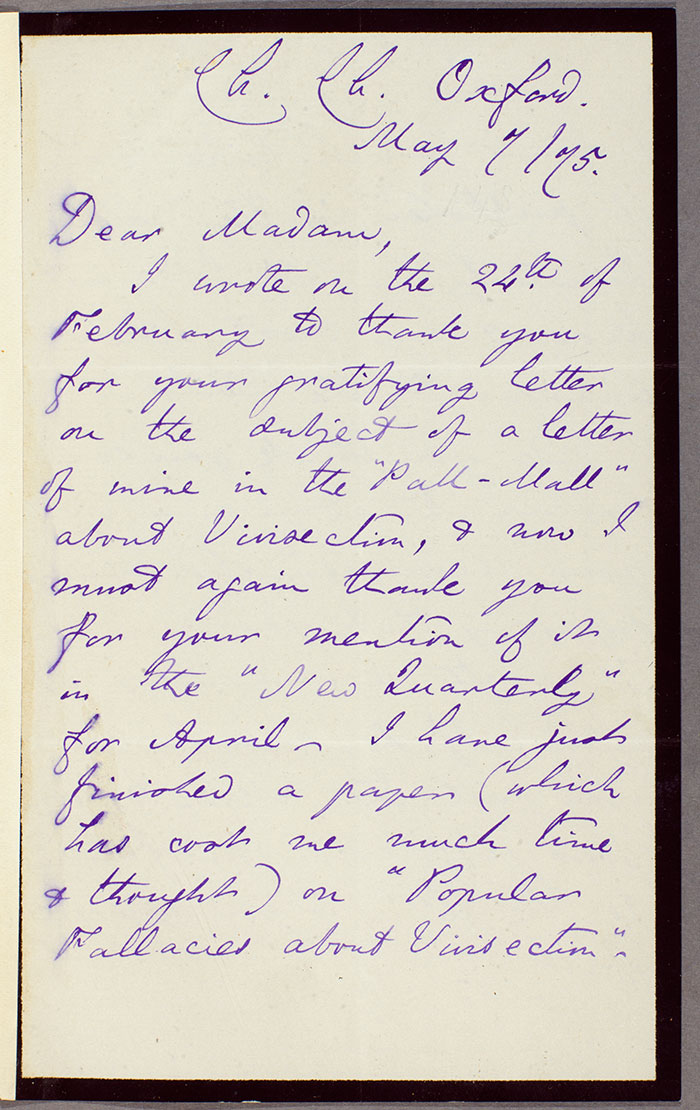 The Huntington also has an “official” first edition, published in 1866. This copy was rebound in an exquisite collector’s binding by the firm Sangorksi & Sutcliffe. Established in 1901, Sangorski & Sutcliffe were known for their elaborate, jeweled bindings. The custom cover features dozens of tiny flowers, hearts of mother-of-pearl at the corners, and a crowned red heart, quartered like a heraldic shield, in the center. The back sports an elaborate monogram of the letters spelling “Alice.” The four suits of cards—hearts, spades, diamonds, and clubs—decorate the spine.

“Why is a raven like a writing-desk?” —Lewis Carroll, Alice’s Adventures in Wonderland

Dodgson was a prolific correspondent, sending and receiving nearly 100,000 letters in the last 37 years of his life. His private letters were usually written in purple ink. He was also a fierce anti-vivisection advocate. In one letter from the collections, Dodgson requests assistance from feminist author and reformer Frances Power Cobbe (1822–1904) on the publication of an anti-vivisection essay. Cobbe was a frequent contributor to numerous periodicals, fighting for women’s rights and the rights of animals. 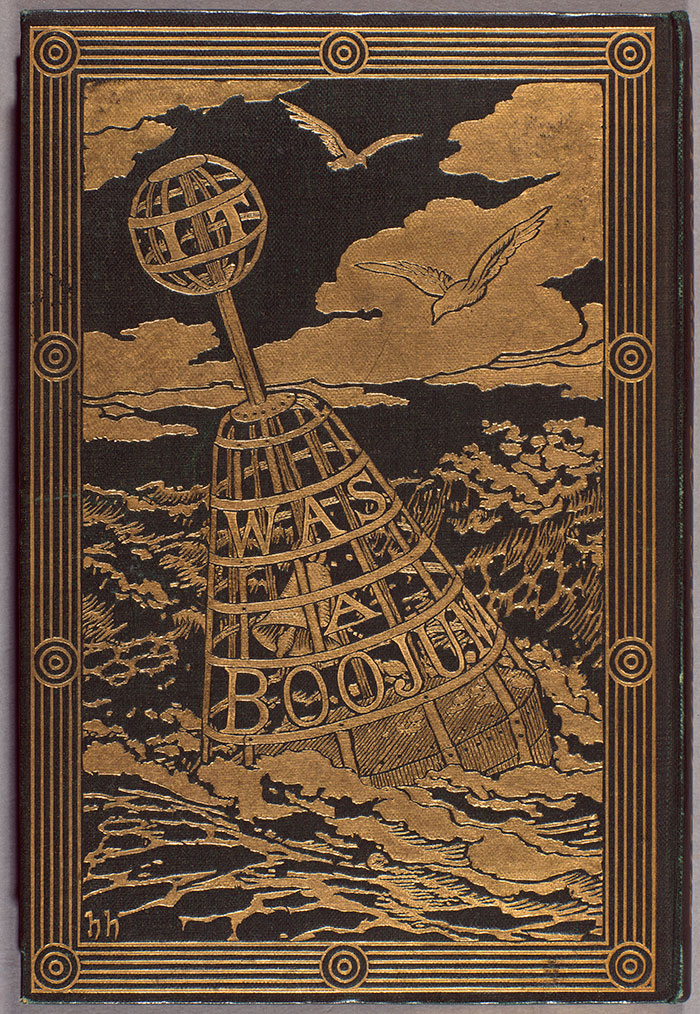 Another gem is Dodgson’s clever case for sorting and storing postage stamps of varying denominations. Dodgson invented many trifles and gadgets, as well as games involving logic and word play. The Wonderland Postage Stamp Case was designed to be stored with one’s letter- writing materials, and it came with a small pamphlet titled “Eight or Nine Wise Words about Letter-writing.” It was both practical and marketable. The case and slipcover show Alice holding a baby and a piglet respectively, alluding to a well-known Wonderland episode in which a baby changes into a pig.

“Why, sometimes I've believed as many as six impossible things before breakfast.” —Lewis Carroll, Through the Looking-glass, and What Alice Found There

The literary Dodgson was known for his whimsy and his invented words. The back cover of the famously nonsensical The Hunting of the Snark references the fateful last line of the poem: “For the Snark was a Boojum, you see.” Neither creature is depicted in the book, leaving their conjuring to the reader’s imagination. Both have found new identities, however, in the real world. The Snark became the name of Jack London’s round-the-world sailboat. The fanciful Boojum tree (Fouquieria columnaris) is a member of the ocotillo family from the Baja California peninsula. A specimen of it can be found in the The Huntington’s Desert Garden. 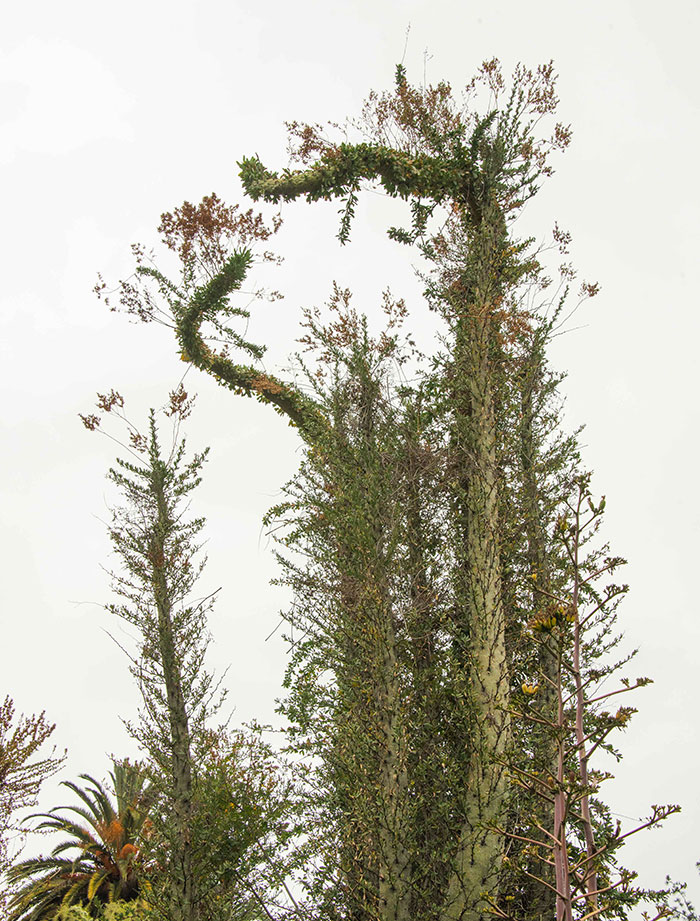 A specimen of the Boojum tree (Fouquieria columnaris) in the Desert Garden. Photo by Deborah Miller.

Wonderland is indeed a place where remarkable things happen every day. Even a Boojum tree would not seem out of place there.

Natalie Russell is assistant curator of literary collections at The Huntington

Wow! This could be one particular of the most helpful blogs We have ever arrive across on this subject. Basically Great. I am also a specialist in this topic therefore I can understand your effort.

Great article. Hope the gala is perfect in every way.