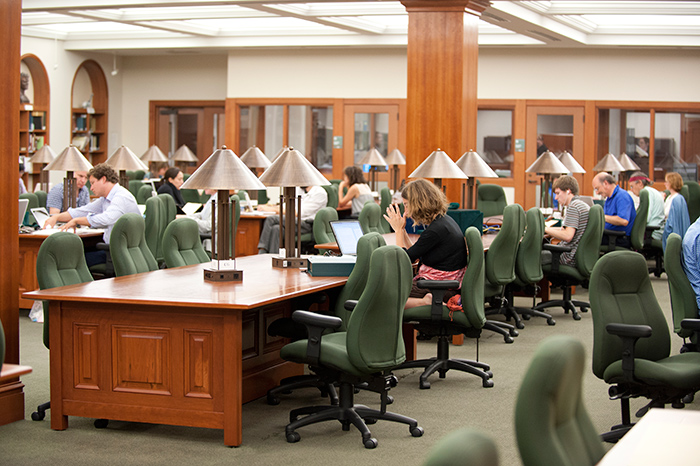 The Ahmanson Reading Room, where researchers from across the country and around the world come to delve into The Huntington’s extraordinary collections. Photo by Martha Benedict.

Summer is a busy time for The Huntington’s research program. As the academic year draws to a close, it’s time for a changing of the guard. The fellowship selection process for the 2016–17 program is complete, and a new roster of candidates has accepted The Huntington’s offers of research grants. The first few recipients are already starting to take their places in the Ahmanson Reading Room. Each day, a steady stream of new fellows pours in.

Choosing which candidates will receive research grants is a rigorous and robust process, including external peer review. This year our committees made 11 awards of long-term fellowships for grantees who will be in residence for the full academic year; and 128 awards of short-term fellowships for scholars who will conduct their research for between one and five months. 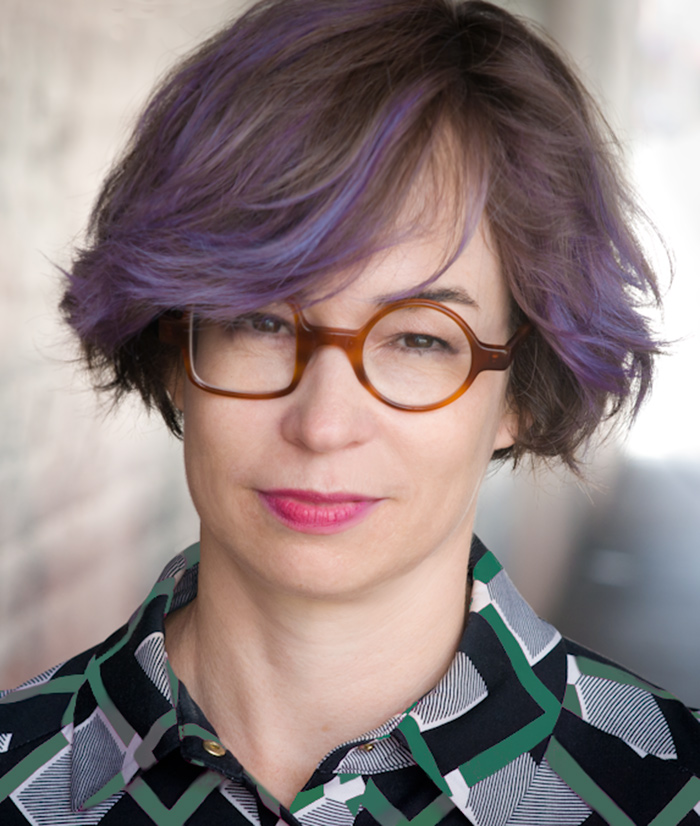 Tiffany Jo Werth, associate professor of English at Simon Fraser University, is the 2016–17 Mellon Fellow at The Huntington. Photo by George Ketsios.

In total, the program received 500 applications for fellowships, translating into an acceptance rate of 39 percent for those who applied for a short-term award and only nine percent for those who applied for a long-term award. One of those fortunate few who will be in residence for the full academic year is Tiffany Jo Werth, an associate professor of English at Simon Fraser University. As the 2016–17 Mellon Fellow at The Huntington, she will be researching her second book, tentatively titled “The English Lithic Imagination from More to Milton.” This builds on her previous book, The Fabulous Dark Cloister: Romance in England after the Reformation, which explored the English Reformation’s effect on one of the period’s most controversial genres: the romance.

“I was doing research at The Huntington a few years ago and became intrigued by how reformers imagined nonbelievers as stone-like,” says Werth. “Drawing on my knowledge of early modern English religious history, I argue that religious doubt, triggered by the long Reformation’s crisis of faith and authority, upended the hierarchies of life espoused by Christian theology. Doubt led polemicists to allege that the ungodly possessed hearts of stone, not flesh.” For the new book, Werth is looking forward to digging into The Huntington’s rich collection of medical anatomy manuals and alchemical treatises, as well as its substantial holdings of early modern prose romances.

“It’s a great pleasure to spend time in The Huntington’s collections and to join the extraordinary scholarly community for which this place is renowned,” says Werth, whose home institution is located in Canada. 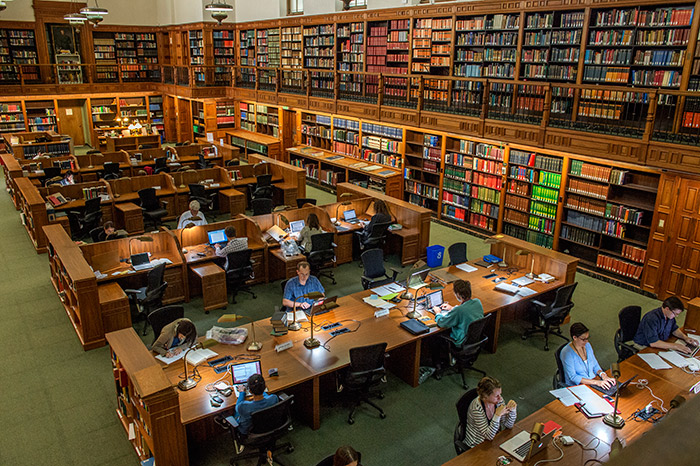 Werth is not the only one coming to The Huntington from abroad. Almost one-third of our grantees come from outside the United States. Perhaps even more strikingly, one-third of those who were awarded fellowships were graduate students at the dissertation stage. As these ratios suggest, the program is highly competitive, and it recruits in a global academic marketplace, but it is also committed to funding doctoral as well as post-doctoral research.

As director of research, it is my pleasure to invite five senior scholars to spend the year as Distinguished Fellows in Residence. Taking up the position of the 2016–17 Robert C. Ritchie Distinguished Fellow in Early American History at The Huntington is award-winning social historian John Demos, the Samuel Knight Professor Emeritus of History at Yale University. He is the author of several books, including The Unredeemed Captive: A Family Story from Early America; The Enemy Within: 2,000 Years of Witch-Hunting in the Western World; and Entertaining Satan: Witchcraft and the Culture of Early New England, winner of the prestigious Bancroft Prize in American History. His most recent book, The Heathen School: A Story of Hope and Betrayal in the Age of the Early Republic, tells the story of a school for indigenous and foreign youth established in 1817 in Connecticut. 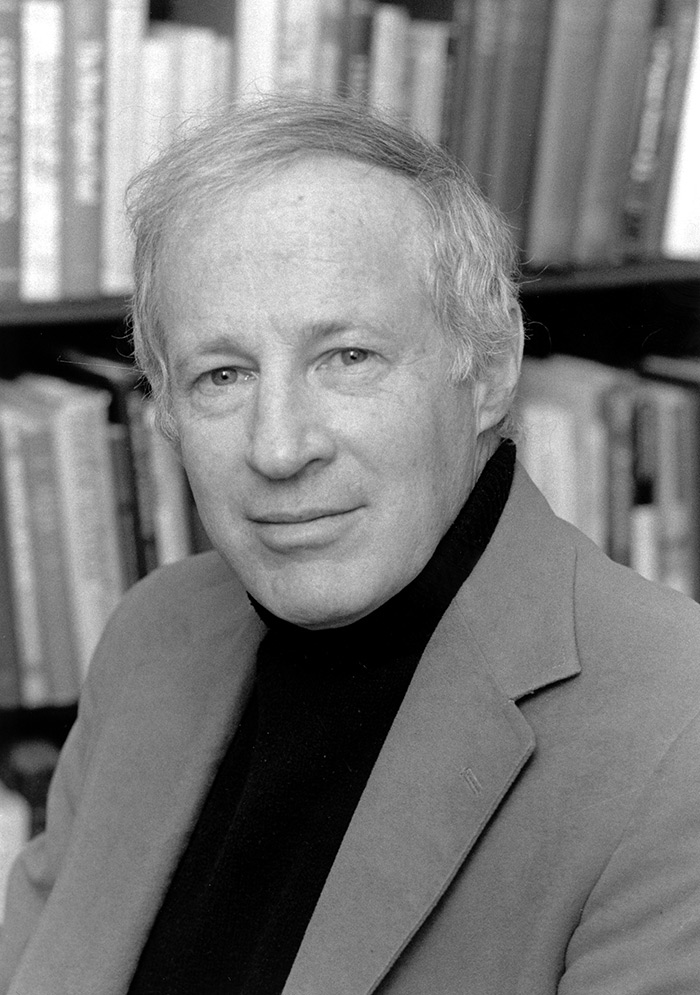 His new book project, “‘I am Rich Potosí’: A Crucible of the Early Modern World,” will chronicle the rise and fall of Potosí, a mining boomtown located at the foot of a once silver-rich Andean mountain in what is now southern Bolivia. “Potosí is nothing less than a place that redirected—and cruelly foreshortened—countless lives, reorganized (or destroyed) whole cultures, financed a vast empire, transformed economies, energized America, and changed the world,” says Demos. During the academic year, Demos and the other Distinguished Fellows will each give a free, public lecture in Rothenberg Hall. (You can listen to lectures by several past Distinguished Fellows on iTunes U.)

The Huntington also appoints researchers jointly with Caltech, Occidental College, and UC Riverside. Considering those appointments, together with the 10 doctoral students funded by the United Kingdom Arts and Humanities Research Council, we will be welcoming almost 200 research fellows in residence over the course of the next academic year. It will be a busy time indeed.

A Centennial Celebration for All
Sep. 5, 2019 by Deborah Miller
0 Comment(s)
Starting today, The Huntington kicks off the birthday of a century with something for everyone ...
More

After the 2016 Research Fellows have completed their assignments they will have the opportunity to submit their work for the King s Experience Research Award, enabling formal recognition of their achievements.

I am just about to start The Heathen School and I look forward to Demos's lecture!