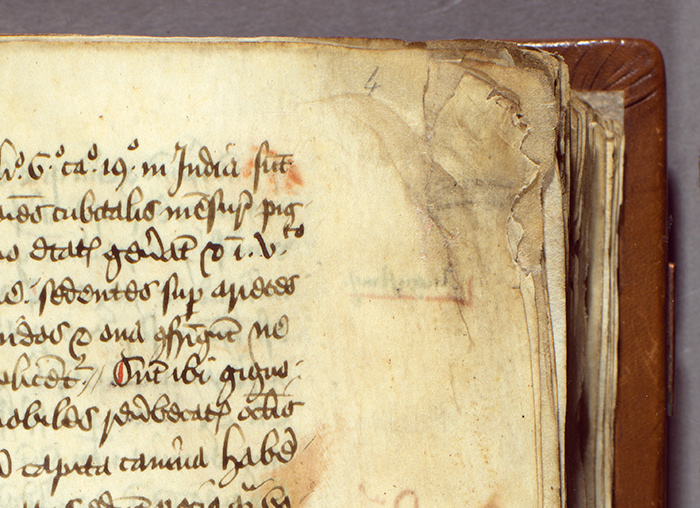 Detail of a scruffy 15th-century manuscript in The Huntington’s collections containing a variety of sources that speak to the history and geography of England. It is referred to as Huntington manuscript 19960—or simply “HM 19960.” The upper corners of some pages in the manuscript became very worn over time. The Huntington Library, Art Collections, and Botanical Gardens.

All medieval manuscripts are valuable. But some sell for much more than others, with prices reaching well into the tens of millions. Beauty is one common reason a text might fetch a higher price. Finely decorated medieval books have the allure of jewelry, with their intricate miniature paintings, ornate illuminated initials, and gilded pages. As a scholar of medieval English literature, I also find value in other ways. Lately, I’ve been spending time with a 15th-century manuscript in The Huntington’s collections containing a variety of sources that speak to the history and geography of England. It is referred to as Huntington manuscript 19960—or simply “HM 19960.” 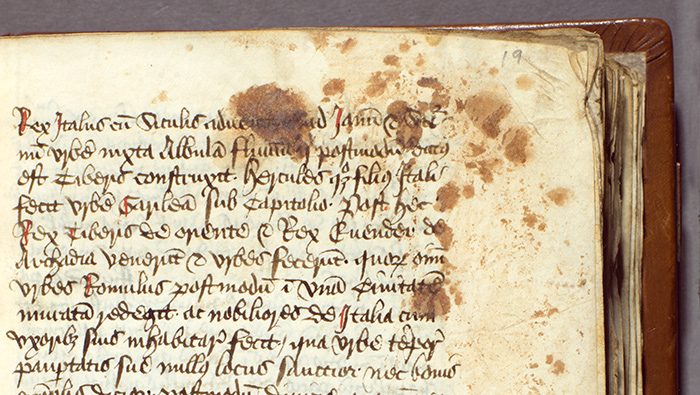 Long ago, ink was spilled across this page of HM 19960. The Huntington Library, Art Collections, and Botanical Gardens.

It’s a little worse for wear and was probably not a particularly beautiful book to begin with. As I delved more deeply into this manuscript, I was reminded of a term that ranch hands use to describe a good working horse—an animal that may not be much of a looker, but it carries you around dutifully, day after day, and gets the job done: a “using horse.” I’ve started referring to HM 19960 as a “using book.” Manuscripts can become damaged by exposure to all sorts of things—fire, water, mold, bookworms. But this particular book looks slightly rough because it was touched, read, paged through, and written on by its various owners down the centuries. It isn’t illustrated, and in fact, after the first few pages, no one bothered to come back through and fill in the remaining spaces that the scribe left for the initials. Red ink is used occasionally for emphasis and for two small illustrations, but the text is otherwise undecorated. It is written in a cursive handwriting style—that is, individual letters within a word are often joined together, an indication of relative haste. (Scribal time is money!) The quality of the parchment also varies: some pages are quite thick and hard to turn, while others are so thin as to be nearly transparent. On some pages, the hair follicles of the animal skin that was used to produce the parchment are very prominent.

In the margin, a small, dark letter "e" floats next to the text, underneath a faded marginal annotation. This letter acts a guide for the artist, who would come through to fill in the spaces left for initial letters (in this case, to complete the name "Ebraucus"), but this work has not been finished in this manuscript. The Huntington Library, Art Collections, and Botanical Gardens.

In many ways, however, this “using book” is even more evocative to me as a reader and researcher than an expensive, beautifully decorated manuscript. It has marginal annotations and shows signs of wear from repeated reading. Who was this reader and annotator? We can’t be entirely sure, although the composition of the text is linked in a prefatory note to the English nobleman and scholar John Tiptoft (1427–1470). Someone has signed “Sheldwych” under the chronological list of major events from English history at the beginning of the book, but we don’t know who that is. What I cansay is that whoever wrote the annotations was especially interested in the early history of England, which is also how I came to find this manuscript. The annotator’s notes cluster excitedly around the passages that narrate the legends surrounding England’s foundation, supposedly by Brutus, a refugee from the fall of Troy. My current book project focuses on how legends about the early history of England informed the changing ideas of what it meant to be English during the transition from the medieval to the early modern period. In this sense, I have something in common with the long-dead reader and annotator of this manuscript: we were both reading English history to think about where the thing we call “England” came from. The only difference is that the long-dead reader was doing so in real time, while I’m following his breadcrumbs nearly 600 years later. 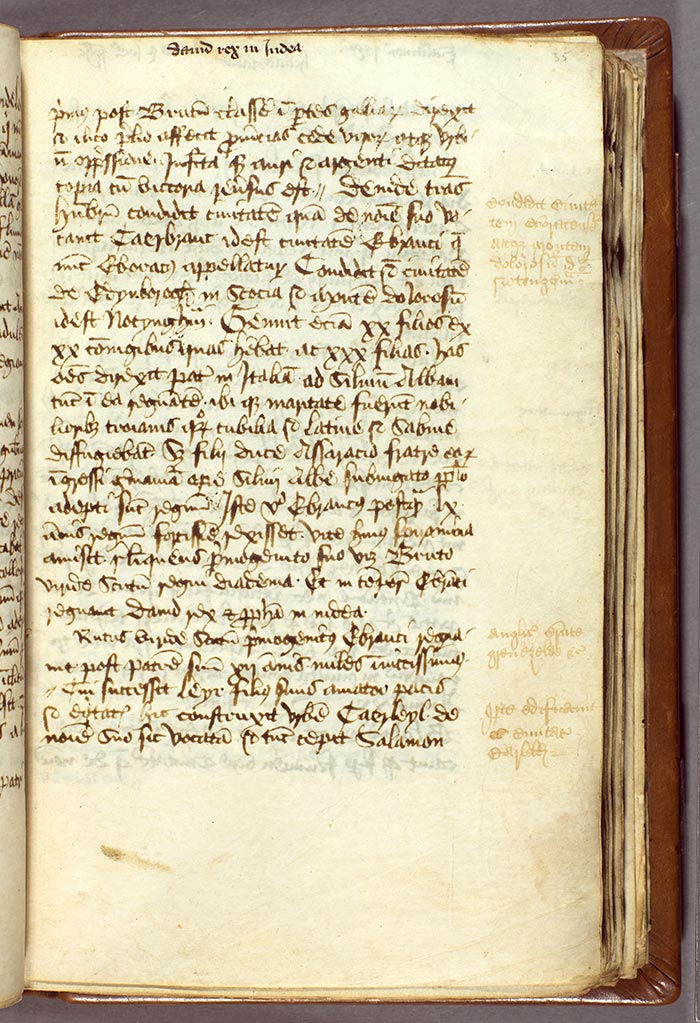 Faint annotations in the right margin, on a page that gives an account of some of the early descendants of Brutus, the legendary founder of England. In the top margin, a note records that King David was the king in Judea at this time—a detail that appears in the main body of the text about three-quarters of the way down the page. The Huntington Library, Art Collections, and Botanical Gardens.

On an even more personal level, I’m literally following his fingerprints. On the left-hand side of the book, there sometimes appears the ghost of a thumb, or, depending on how you think about it, the thumb of a ghost. Many leaves of this manuscript are soiled, and in one photo, you can see a page that is visibly smudged in the middle, where a reader would hold his thumb to keep the book open. Many pages are also dirty and worn on the upper corners, where readers have reached to turn the page. These days, we hold manuscripts open with book weights and cradles, not hands and fingers, and we turn pages with extreme care. Our goal is to leave no marks on these irreplaceable objects. 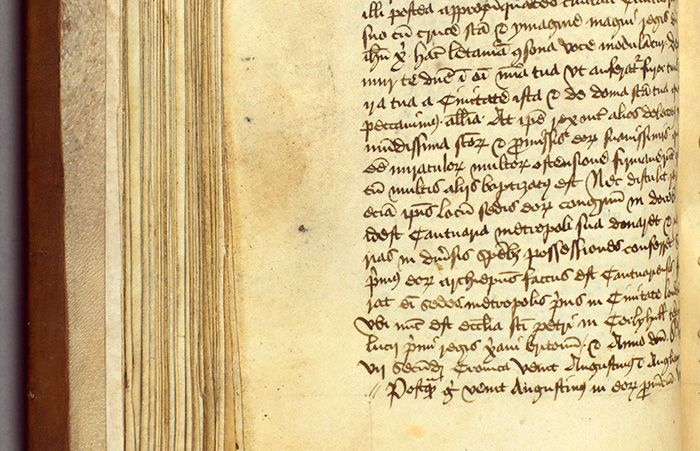 Soiling in the left margin from many years of use. The Huntington Library, Art Collections, and Botanical Gardens.

The traces left by previous generations of readers, however, are precious to me not only for the information they give about who owned, copied, or read the book, but also because they remind us that the book was a personal object owned by a member of a household, rather than a research library. Seeing these personal traces reminds me that even changes in a concept as vast and abstract as what it means to be “English” were driven by individuals—by the actions of specific, real people—reading, thinking, and writing. I do, however, have a confession to make. It is standard practice for researchers to wash their hands before handling manuscripts. But, on the days I handled this one, I washed my hands afterward, too. Leah Klement is a Caltech-Huntington Humanities Collaborations postdoctoral instructor and 2016–18 long-term fellow at The Huntington.

As always, a succinct and informative report.

Thank you for your portal.

A Resurgence of Victory Gardens
Jul. 1, 2020 by Usha Lee McFarling
0 Comment(s)
In an effort to increase self-sufficiency and reduce trips to the grocery store during our current pandemic, a growing number of people are adding vegetable and herb gardens to their own yards ...
More