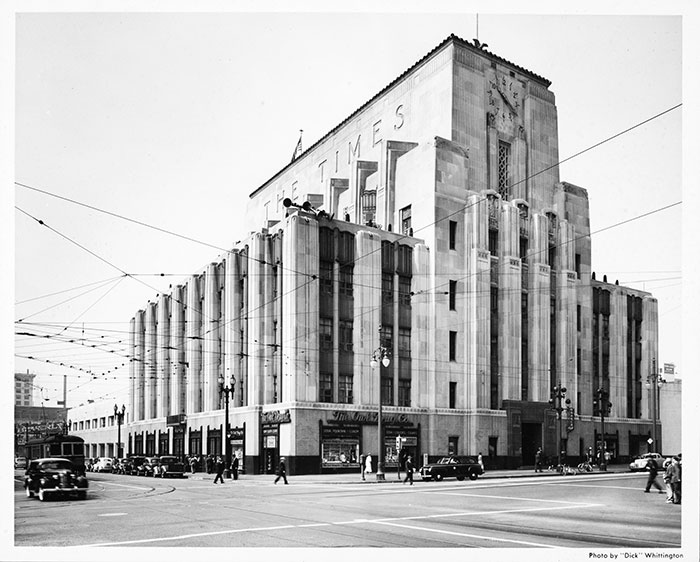 This month, Los Angeles Times employees decamp from their namesake building at the corner of First and Spring streets downtown. After 83 years of occupying the building, the Times is moving staff to a new home in El Segundo—leaving behind a monumental icon of the city’s Art Deco period. 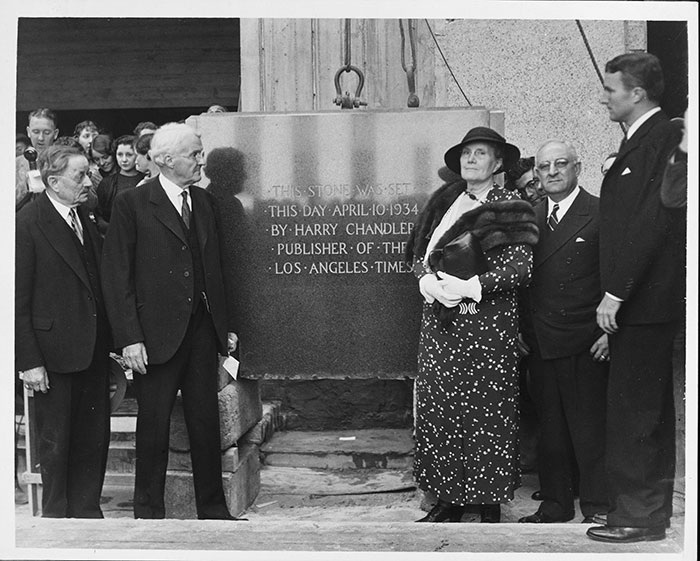 The Huntington is home to many such collections from the city’s business titans. The Huntington also holds the photograph collection of the P.J. Walker Construction Company, which built the 1935 Times building. Photos of reporters, photographers, press operators, and other professional staff are found in the “Dick” Whittington Studio Collection of Negatives and Photographs, a popular commercial and business photography firm of the era.

The 1935 building was the fourth home of the Los Angeles Times; a prior location was dynamited in response to the union-busting politics of the paper’s first chief editor, Harrison Gray Otis. Otis’s son-in-law, Harry Chandler, was the paper’s publisher during the construction of the 1935 building. A cornerstone made of California black granite mined near Riverside contains a time capsule with copies of the paper from the days following the 1910 bombing, along with other historic editions. The Times remained in the Chandler family until 2000.

View of “Globe Lobby,” shortly after its completion, including a portion of the Hugo Ballin mural. Los Angeles Times Records, 1869–2002. The Huntington Library, Art Collections, and Botanical Gardens.

Although the Times eventually grew to occupy five buildings on the block at First and Spring streets, the 1935 building remains the most visually identified with the paper. Featuring a giant neon clock face and “THE TIMES” spelled out in huge letters along the side of the building, it was a cutting-edge example of a modern newspaper plant at the time.

Renowned Art Deco architect Gordon B. Kaufmann visited newspapers around the country as he designed the Times building. It is recognized as one of his signature works, with colossal concrete walls that housed the massive printing presses inside. 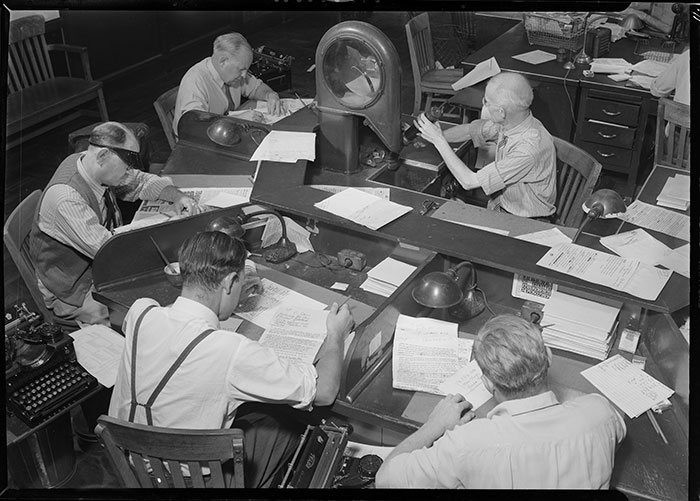 One of the building’s most notable interior features is the Globe Lobby, designed by Kaufmann and decorated with murals by Hugo Ballin that depicted “the influence of a newspaper on humanity, and the mechanical means used to prepare a newspaper,” according to a piece entitled “A Monument to Our City,” written by Kaufmann and published in the Times in October of 1934. The centerpiece of the lobby is a massive aluminum globe that revolves slowly, depicting the worldwide reach of the paper.

In recent decades, the footprint of newspapers has decreased substantially, both due to digital technology and sharp declines in circulation. Newspapers no longer need photography studios or large tables for designing and pasting up sections by hand, and large portions of the Times complex are now unoccupied. Times staff once occupied 750,000 square feet and now will occupy 120,000 square feet in El Segundo. 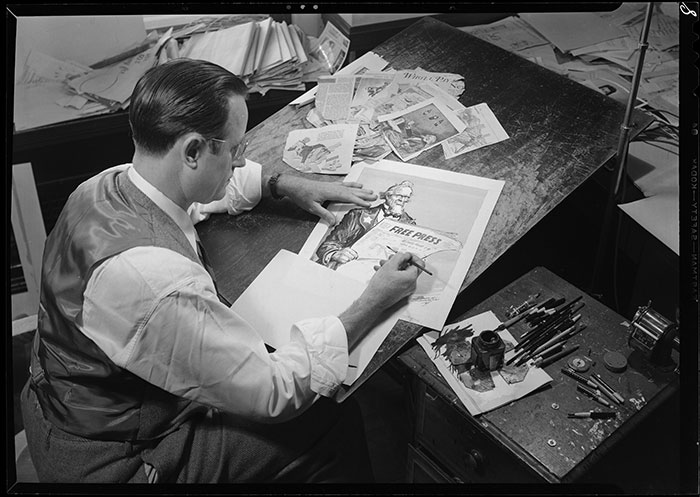 The Los Angeles Times became a tenant of the building in 2016, when then-owner Tribune Co. spun off its newspapers in a company separate from its real estate assets and sold the building to a Canadian developer. Local biotech entrepreneur and billionaire Patrick Soon-Shiong purchased the Times in June, citing steep rent increases as the reason for the move.

In early July, a group of local preservationists filed paperwork to secure city monument status for three of the five buildings that make up the Times complex. What the redeveloped complex will look like is unclear. But just as it was in the 1930s, the building will be a highly visible part of grander plans for the Civic Center area of downtown. A master plan for the city’s many municipal buildings in the area is underway, with some being demolished and others renovated. The Times’s printing plant, which is visible from the 10 Freeway at Olympic Boulevard and Eighth Street, will remain in its current location.

Amy Miller is a Pasadena-based freelance writer and editor.