From the Stacks: Volterra's Egg 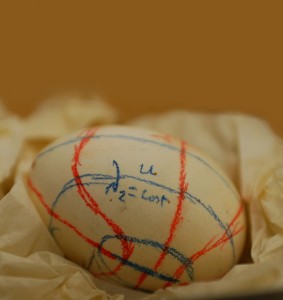 While reviewing items from The Huntington's history of science collection for a project I'm working on, a box labeled "Volterra's Egg" caught my eye. Vito Volterra (1860–1940) was an Italian mathematician who made large advancements in both applied and pure mathematics, but, as far as I knew, had nothing to do with eggs.

I opened the wooden box and found a small paper box with the inscription on top: Uovo servito per lo studio sui moti del poli terrestre, or, "The egg is used to study the motions of the terrestrial poles." These terrestrial poles—the axis of the Earth's rotation—were of particular interest to Volterra, who was involved in a dispute about the motion of these poles with fellow Italian mathematician Giuseppe Peano (1858–1932) beginning in the 1890s.

The egg itself is a hollowed-out chicken egg marked with three different colors: red, blue, and black. Near the red and blue lines there are equations written in the corresponding color. Under the egg there are tissue papers as well as an Italian newspaper from 1925. Eggs have many interesting geometrical and physical properties, but it's unclear which of these made an egg the best model for Volterra.

I'll be talking to Volterra biographer and Caltech archivist Judith Goodstein later in the month to learn more about how Volterra may have used the egg and what its history may have been since he completed his work.

John Vining is a former summer intern in the manuscripts department at The Huntington. He is currently working toward his Bachelor of Arts in Philosophy and History of Math and Science at St. John's College in Annapolis, Md.