From the Stacks: Revisiting Volterra's Egg 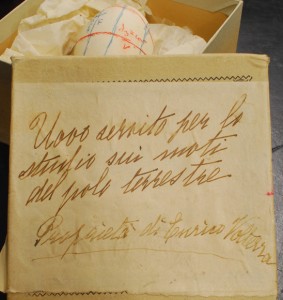 Earlier this summer I wrote about Volterra's Egg, a hollowed-out chicken egg that Italian mathematician Vito Volterra had marked up with curves and equations. It's among the items in The Huntington's history of science collection. Because its origin and use are still mysterious to me, it seemed worthwhile to contact a Volterra expert. Luckily, Volterra biographer Judith Goodstein works down the street at Caltech.

When we met at The Huntington to look at the egg together, Goodstein first told me that the handwriting on top of the box is that of Vito's wife, Virginia, who had a penchant for collecting objects in the family history. Goodstein guessed that Vito Volterra used this egg to teach his son, Enrico, later a mathematician himself, about the motion of the terrestrial poles.

It's hard to know for sure how Volterra used the egg to explain the phenomena to his son. We can, however, gain some clues about its private use from Volterra's published work.

In her book The Volterra Chronicles, Goodstein writes: "In 1898, Volterra published his definitive work on the polar shift problem, some 156 pages of closely reasoned arguments embedded in a forest of calculations and diagrams." 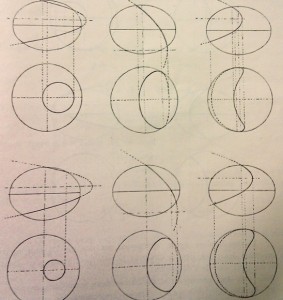 In this paper, Vito compares the motion of the terrestrial poles to ellipsoids, the three-dimensional analogues to ellipses. Aside from the visual similarities in the sort of curves we see in his paper (pictured) and on the egg, the egg's inherent shap—closely that of the halves of two different ellipsoids combined—points to a strong connection in the curves being examined. Though the egg's exact history is still unclear, it's a unique example of how special collections can give us insight into both the personal and professional lives of its subjects.

John Vining is a former summer intern in the manuscripts department at The Huntington. He is currently working toward his Bachelor of Arts in Philosophy and History of Math and Science at St. John's College in Annapolis, Md.