A Sneak Peak at the Japanese Garden 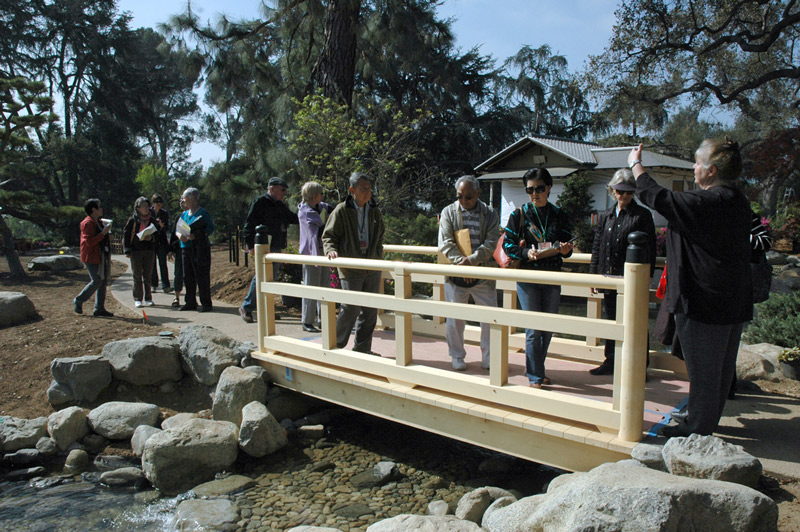 A group of Huntington volunteers enjoyed a special perk this week: A chance to go behind the construction fence for an early preview of the renovated Japanese Garden. It was all part of the volunteers' preparations as docents-in-training who will be giving public tours of the Japanese Garden after it reopens on April 11, just in time to celebrate its centennial.

While carpenters, craftsmen, preservationists, and landscape designers have been busily completing the year-long renovation project, the docents have been equally hard at work, learning everything they can about this historic and much-loved garden. From temple bell to tea ceremony, from koi to karesansui, they've soaked up Japanese culture in classroom sessions that have featured in-depth presentations by key members of the project team.

For many of these volunteers, the unique educational opportunity was a big part of what motivated them to become docents.

"I was a high school mathematics teacher and a school administrator for 40 years," says Gloria Cox. "I missed teaching and learning." Cox joined the docent ranks in 2001 and now leads tours in several program areas. Adding the Japanese Garden to her training gave her a chance to learn about other cultures and traditions. The garden also carried fond personal associations for Cox. "When my grandchildren were very young, they loved coming to The Huntington, and we would always end our journey in the Japanese Garden. It had a very calming effect on these very active boys—and their grandmother."

Hiromi Sata was born in Japan, so she brings a unique perspective to the docent program. She had a long-standing interest in Japanese garden design, but living in Southern California, with all its diversity, brought her passion into sharper focus. "After I moved to L.A., I found the beauty of diverse cultures, but I also realized a new appreciation for my Japanese cultural heritage." Joining the docent program became a natural extension of her interests, which include the Japanese tea ceremony. Sata is particularly excited about the new ceremonial teahouse, Seifu-an (the Arbor of Pure Breeze), and the tea garden surrounding it. "There will be so many points of interest everywhere: the tsukubai (stone wash basin), the machiai (waiting bench), the nijiriguchi (small portal through which guests enter the teahouse). If you don't know about the tea ceremony, you might have questions. How to use? What is the reason? Why?" Sata looks forward to helping visitors discover the answers. 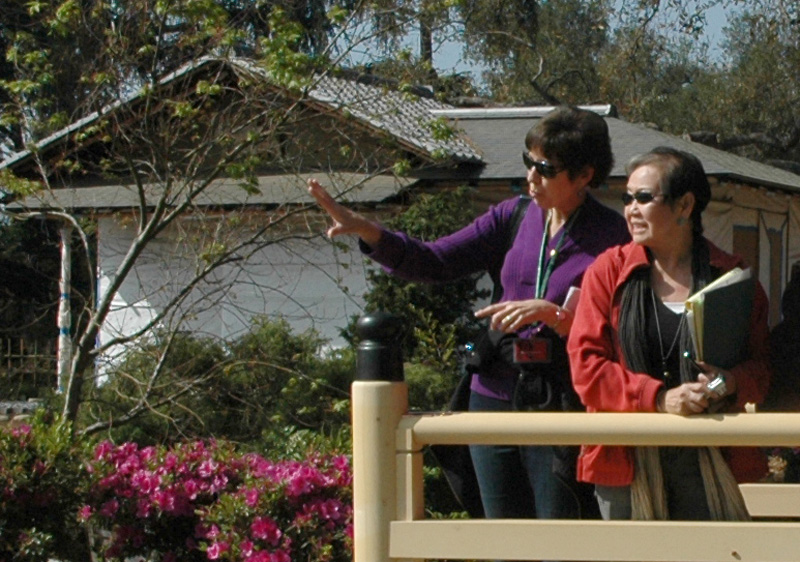 Several of the docents in the class also lead tours of The Huntington's Chinese garden, Liu Fang Yuan. For Nino Wong, the opportunity to explore the two gardens' shared influences and contrasting styles was irresistible. "I'm enjoying learning about the refinements of Japanese culture. Many of the influences of early Chinese culture carried over to Japan, so as a docent it seemed a natural transition to explore the different directions taken from a common point."

And she marvels at having two world-class examples to study side by side. "Where else, even globally, can you be in a classical Chinese garden with one foot and have your other foot in a Japanese garden?"

Dennis Kneier describes himself as an "interloper" in the class; an active docent in the Chinese garden, he won't be leading tours of the Japanese Garden but has audited several sessions in order to round out his knowledge. A longtime local resident, Kneier grew up with The Huntington and understands the strong public appeal of the Japanese Garden, particularly as the historic landscape marks its centennial year. "The view one gets approaching the garden is breathtaking. It takes you to another world. It's no surprise that visitors appreciate it and love it. For me, just knowing that the Japanese Garden has been here for 100 years makes it all the more interesting and special."

Docent-led tours of the Japanese Garden will begin in May. Contact the Group Sales office for details and reservations. Tours of the Chinese Garden are also available.