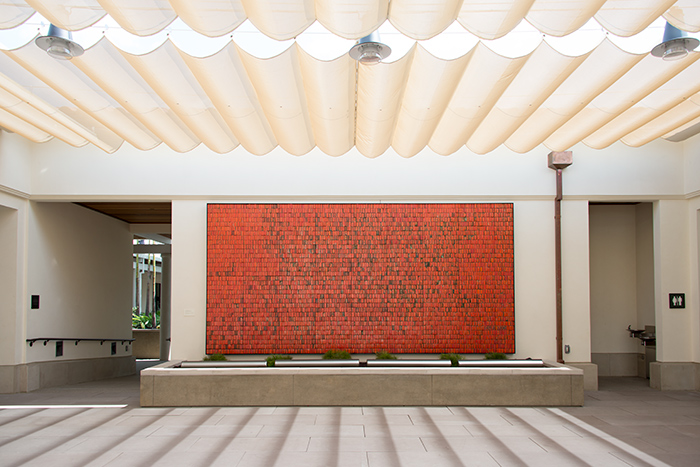 Doyle Lane, Mutual Savings and Loan Mural, 1964, clay, 17 × 8 ft., as installed in the courtyard of the June and Merle Banta Education Center, part of the Steven S. Koblik Education and Visitor Center. The Huntington Library, Art Collections, and Botanical Gardens.

Los Angeles ceramist Doyle Lane (1925–2002) became known for his collectible “weed pots,” as he called his vases with small openings for holding a few stems, and for what he called “clay paintings”—geometric and boldly colored ceramic disks—that have been compared to the paintings of John McLaughlin and Frederick Hammersley. Lane also created monumental ceramic murals.

One of these, commissioned by architect Welton Becket in 1964 for Mutual Savings and Loan offices in Pasadena, Calif., has been installed in the courtyard of the June and Merle Banta Education Center at The Huntington. Measuring roughly 17 by 8 feet, the work consists of hand-formed tiles, each glazed a warm red and tinged with black edges.

“Lane painstakingly formed, fired, and glazed every component of the work, and each tile has a subtly distinctive character,” says Jessica Todd Smith, Virginia Steele Scott Chief Curator of American Art for The Huntington. “The individual parts make up a powerful whole. It surely will delight students and other visitors coming to the new education center, and it enhances our growing collections of works by African-American artists and by mid-20th century ceramists,” says Smith.

Sculptor and freelance conservator Morgan MacLean spent four months at The Huntington—documenting, treating, and installing the Lane mural. Out of the 4,876 tiles that make up the mural, MacLean restored 256 tiles that showed some evidence of damage.

We asked MacLean to share with us his experiences during the restoration process.

Q: Could you give us an overview of the work you did to restore the Lane mural before you installed it?

A: We photographed each panel and then noted in our condition report where there was any damage, such as cracking or chips. The tiles are about three inches tall, but they vary in width and depth. The mural is so huge that Lane had to divide it into 22 panels.

Q:  Why did he have to divide the mural into so many panels?

A: Pretty much for transportation. He made the mural in his studio and then had to get it moved to the Savings and Loan building to install it. Dividing the mural into panels also enabled him to organize the thousands of tiles into manageable sections. Each panel has roughly 260 tiles. 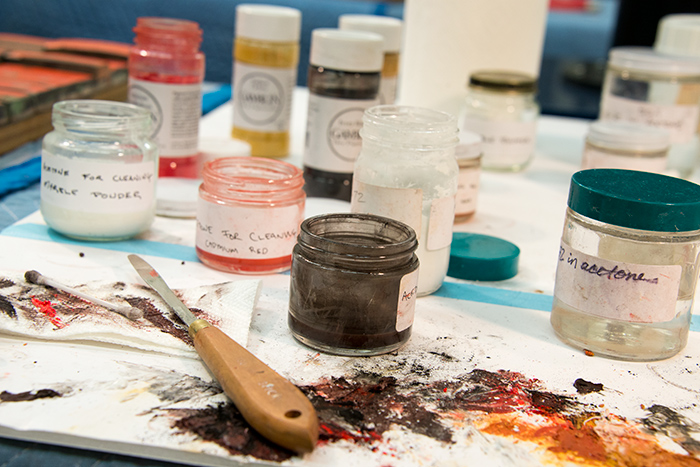 Q:  How did you restore the damaged tiles?

A: Using an artist knife, I applied to each damaged section a thin coat of a treatment comprising acetone, Paraloid B-72 (a clear acrylic resin), marble powder, and dry pigment. Some tiles had as little as a 1/8-inch loss of glaze, but sometimes a tile was cracked in half and about two inches of glaze was lost. When a lot of glaze was lost, I had to build up layers of treatment slowly over several days, creating a surface that resembled the rest of the tile. That was a fun but tricky process because of the variation of colors. I would first apply a treatment with a light cadmium red pigment, and then the next day, I would apply another treatment with a little darker cadmium red so that you could see the light coming through the dark, producing a natural glaze appearance. After the treatment dried for a while, I would go over the tile with a dry brush to create little dimples in it so it looked like dried natural glaze. 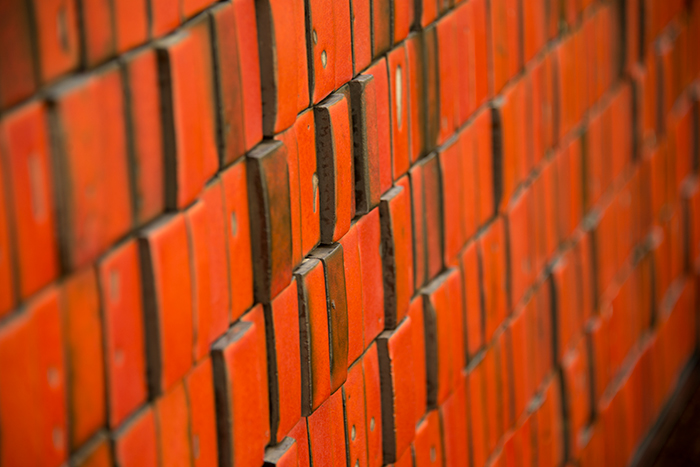 Q:  What did you learn about Doyle Lane’s artistry as you worked to restore his mural?

A: I was really taken by his process to make this piece; every tile is glazed red, yet each tile is individual in its composition. When trying to create cadmium or magnesium reds, Lane had a lot of burn off during the firing process—that’s what caused the blackness on the tiles. The red was really hard to achieve, and so he embraced that, and it became part of the artwork. It was a study of red but also a study of chance.

The other wonderful aspect of the piece was how he displayed the thousands of individual tiles. He chose a very modernistic, linear approach, lining up the tiles—roughly 32 tiles high and 150 tiles wide—to study this variation in red. He also varied the dimensions of the tiles to add texture.

I have great appreciation for the ingenuity it took to construct the entire mural. He had to perfectly fit the tiles onto each panel, which must have been very challenging to do because of the variations in the tiles’ widths. I imagine that he laid the tiles out dry on each panel to see how they would fit, then removed them, inventoried them, and finally glued them in place. And he did that for not just one panel but for 22 of them. I understand the kind of obsessiveness that required.

It makes you realize that sometimes the simplest thing to look at is the hardest thing to create. 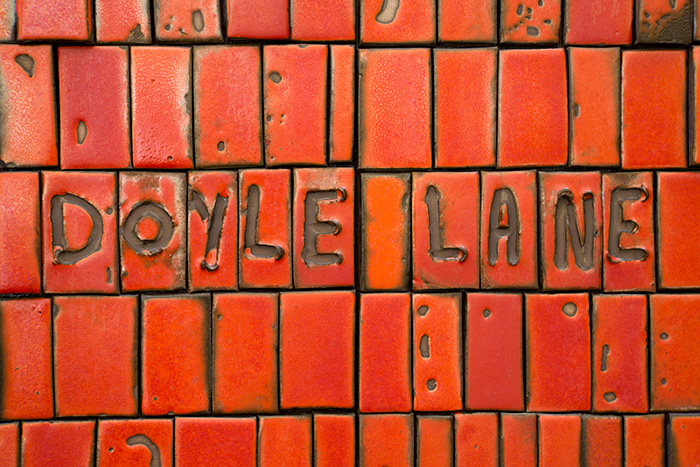 You can read more about Doyle Lane and this mural in “Three Artists, Three Visions” by James Glisson, Bradford and Christine Mishler Assistant Curator of American Art at The Huntington, in the current issue of Huntington Frontiers (PDF version here). You can find an animated GIF of various views of the mural on our Tumblr. And on our YouTube, you can view a time-lapse video showing the installation of the mural at The Huntington.

I love this mural. It is spectacular. So evocative of the mid-century California aesthetic.