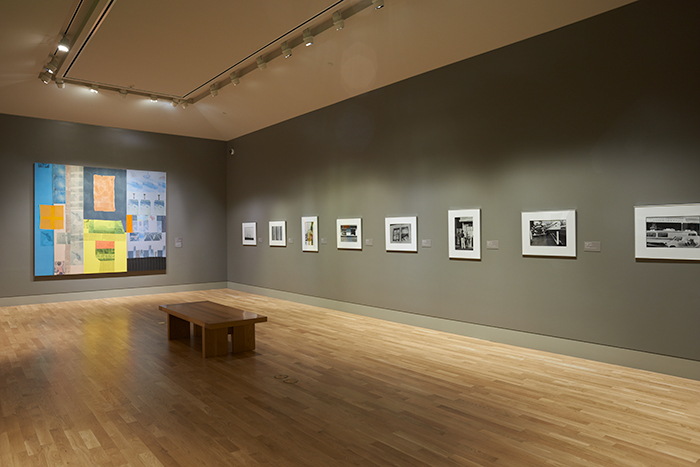 Robert Rauschenberg’s Global Loft (Spread), 1979, left, was acquired in 2012 as a gift in memory of Robert Shapazian. It is now joined by 15 of the artist’s photographs of Los Angeles, on loan from the Robert Rauschenberg Foundation. Photo by John Sullivan.

Since 2012, The Huntington has displayed Global Loft (Spread), 1979, a mesmerizing work by groundbreaking 20th-century artist Robert Rauschenberg, combining acrylic paint, pieces of fabric, three glue brushes, and a series of photographs on three conjoined wood panels. Visitors can now contemplate that piece alongside 15 of the artist’s photographs depicting Los Angeles in 1981 from his “Photos In + Out City Limits” series. The photographs are on loan from the Robert Rauschenberg Foundation and on view in the Virginia Steele Scott Galleries of American Art until June 2, 2015.

Photography was central to Robert Rauschenberg’s work as an artist. He frequently used photographic images, both ones made by him and others, in his painting and printmaking. He also considered photographs as works of art in their own right. Early in his career, he had expressed the desire to photograph the entire United States. In that spirit, he later turned his camera lens on several cities, including Los Angeles. In a book about the “Photos In + Out City Limits” project, Rauschenberg explained that his purpose was not to totally document, moralize, or editorialize the cities he was photographing. Instead, he said the photographs were “a collection of selected provocative facts (at least to me) that are the results of my happening to be there.” 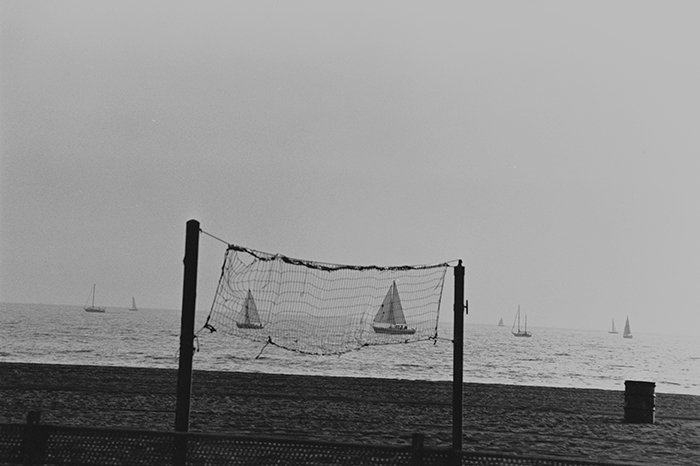 Rauschenberg’s images combine the familiarity of a resident with the fresh perspective of an observant visitor. Rather than looking to the architecture of freeway overpasses or focusing on obvious L.A. landmarks, he took the point of view of the pedestrian on side streets, in parking lots, and by the beach. Some of these images express the visual cacophony of the city. Others are quiet and serene. Most of them capture surprising juxtapositions that express the artist’s playful sense of humor and illuminate his fascination with reflections, shadows, popular culture, and the intersection of the man-made world with the natural environment.

A volleyball net frames and seemingly catches two sailboats. A painted wave appears to crash into a parked car. Flats of live plants sit next to faux bois. The Queen Mary ocean liner appears to be parked next to a recreational vehicle and a van adorned with a painting of a cowboy lassoing a steer. These fleeting moments, so carefully framed, stand in for the larger city, a place that clearly amuses him. 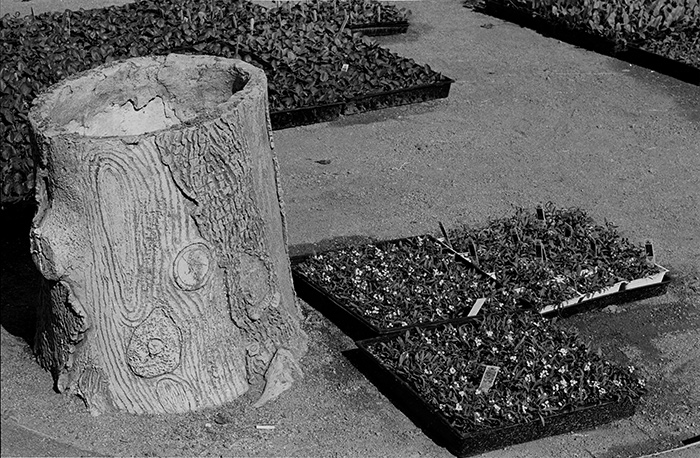 Rauschenberg wrote that he used photography to resolve a personal conflict between curiosity and shyness. He thought of the camera as giving him permission to walk into every shadow or watch while any light changed. He wrote: “Mine is the need to be where things will never be the same again, discovering a kind of archaeology in time only, forcing one to see whatever the light or the darkness touches, and care.” He may have hid behind his lens to mediate his interactions with the world, but the results are squarely part of his artistic practice, demonstrating the visual acuity and wit that pervade all his work.

The Huntington holds a particular affection for Robert Rauschenberg, rooted in a well-documented account of how he decided to become an artist. Born in Port Arthur, Texas, Rauschenberg spent his adult life primarily in New York and Florida. While serving in the United States Navy from 1944–1945, he was stationed in San Diego. On a day off, he made his way north to The Huntington. Standing in front of the large 18th-century British portraits that hang in the Huntington Art Gallery, he had the stunning realization that he could become an artist. 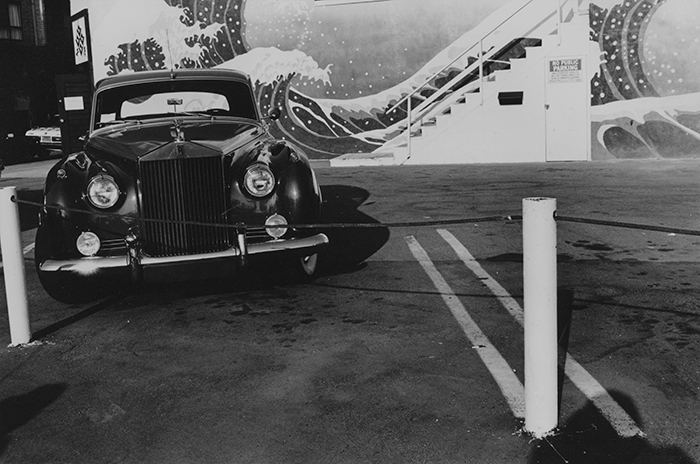 The Huntington would like to thank the Robert Rauschenberg Foundation for so generously lending these photographs and supporting the installation. The 89 photographs that were part of “Photos In + Out City Limits: Los Angeles” were exhibited at the Rosamund Felsen Gallery in the early 1980s. The cities Rauschenberg photographed included Baltimore, Maryland; Boston, Massachusetts; Captiva, Florida; Charleston, South Carolina; Ft. Myers, Florida; Los Angeles, California; and New York, New York.

Related content on Verso:
From Gainsborough to Rauschenberg (June 7, 2012)
Something to Celebrate (July 3, 2012)