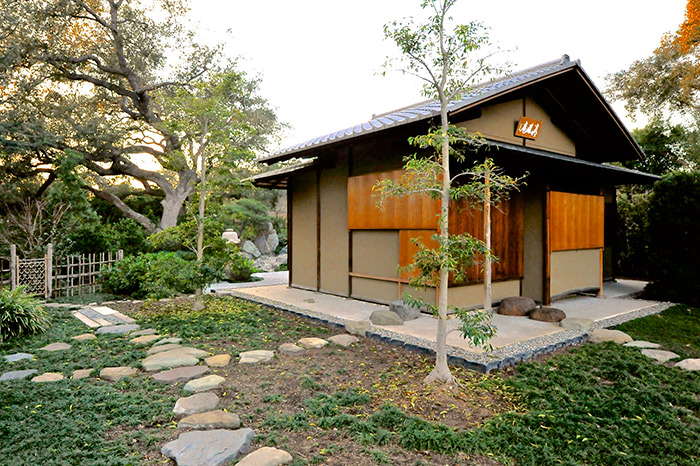 Takuhiro Yamada envisioned mature Japanese pine trees framing the Seifu-an teahouse. When he couldn’t find them, he chose two mochi trees (Ilex integra), a type of holly native to central and southern Japan, seen here to the left of the structure. Photo by Andrew Mitchell.

Kyoto-based landscape architect Takuhiro Yamada stood in The Huntington’s Japanese tea garden and gazed at the trees and shrubs near the Seifu-an teahouse. For inspiration, he closed his eyes and imagined that he was in Japan. Instead of seeing the San Gabriel mountains, he thought of the peaks surrounding the southern Japanese city of Kyoto, and he pictured the teahouse as a mountain hut.

When he opened his eyes, he was decidedly back in San Marino. Yamada designed the tea garden in 2011. To allow for the hotter, drier climate of Southern California, he made certain concessions. Instead of moss as a groundcover, he used dwarf mondo grass in one area, creeping thyme in another. When he couldn’t find mature Japanese-style pine trees to frame the teahouse, he used a type of holly, Ilex integra, whose trunk will eventually reach up to two feet in diameter.

Each year, he returns to check on the garden’s progress. This year, he arrived with two assistants, Tomohiko Kawamura and Fumitaka Hano. The trio used their pruning prowess—and Japanese tools—to clip, shape, and reposition the plants in the tea garden, as well as in The Huntington’s historic Japanese Garden, following a Kyoto-style design aesthetic. 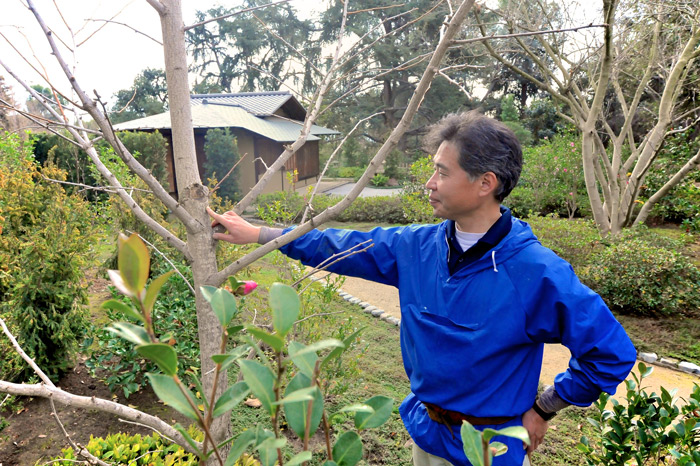 Yamada was relieved to see that a Ginkgo biloba tree had regained the height it had lost during a 2013 windstorm. Photo by Andrew Mitchell.

In the tea garden, Yamada pruned to reflect the way understory trees in a forest would grow—keeping the Japanese bamboo (Sasa veitchii) thinned out and the Japanese maples (Acer palmatum) tall and open at the top, as if they were reaching for the sunlight. He checked on a Ginkgo biloba tree that was shorn in half by a 2013 windstorm. Yamada felt pleased when he saw the tree had already regained its original height. He prizes the ginkgo for its beauty and straight trunk, and for the golden color of its leaves in autumn.

The team took particular care pruning the trees and shrubs framing the view from the waiting bench, or machiai—typically the most important view in a tea garden. Where they could, they coaxed the trees to adopt a Kyoto look. For instance, the branches of several specimens of black pine (Pinus thunbergii) were allowed to extend and taper at the end. This style differs from that of northern Japan, where heavy snowfall can weigh down and even break a tree’s boughs, leading to shorter branches, with a more rigid shape.

As in many gardens, pruning occurs twice a year. Major pruning happens in January or February, and then a less intense round ensues in May or June when new shoots appear. While Yamada’s team was here, they devoted time to schooling The Huntington’s crew for Asian gardens on how to improve their Japanese-style pruning. 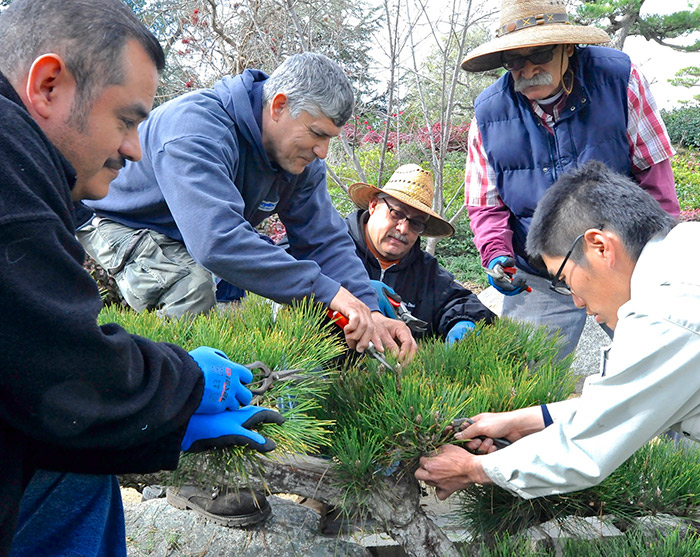 Take, for example, the Japanese black pine, Pinus thunbergii, a beautiful ornamental tree found throughout the Japanese Garden. Seen from a distance, a specimen leaning toward the bonsai court seemed pleasing. But, up close, you could see that tiny branches had started growing every which way, impeding air flow and shading lower branches. An American gardener might use a standard pruner to remove some larger branches and shorten others.

Kawamura had a more refined method. He climbed a ladder perched against the tree and used his narrow-nosed pruners, called kiribashi, to reach within each cluster of branches. He cleared out some of the tiny branches and stripped the older needles, which would be the first to turn brown. He left the outer parts of the branch intact to maintain its soft look. 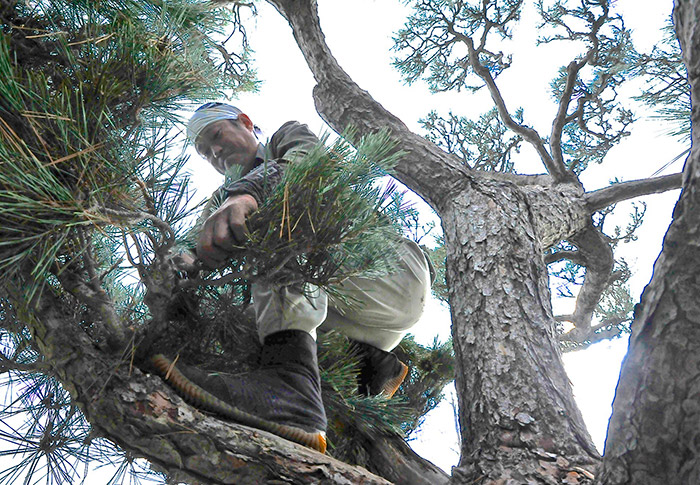 To trim a mature Japanese pine tree, Tomohiko Kawamura had to clamber up a ladder to reach inside its clusters of branches. Photo by Andrew Mitchell.

Nearby, four Huntington gardeners pruned a single small Japanese black pine—with Hano observing their every move. Each gardener took a turn, and then Hano critiqued them, both on how they cut and where. Around and around the tree they went, asking questions as they worked.

Yamada is pleased with how the tea garden is evolving. Some people insist true Japanese gardens exist only in Japan. Yamada disagrees.

“It’s possible to have a real Japanese garden in many places around the world,” he says.

Yes, he’s had to substitute some plants, but he doesn’t feel that these detract from the garden’s validity. “What’s important,” he says, “is honoring its authenticity.” 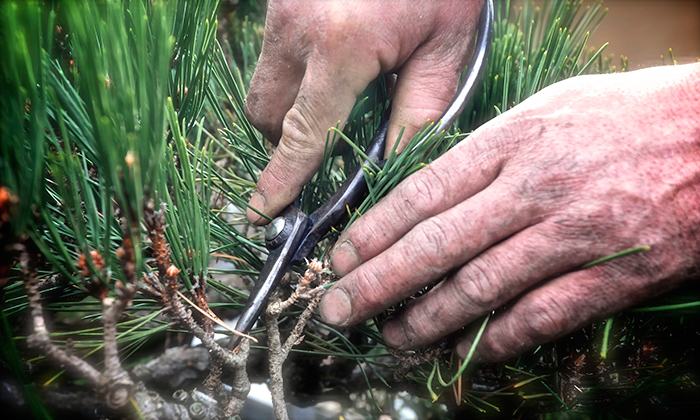 Kawamura’s tool of choice is the kiribashi, with its narrow, sharp blades. Photo by Andrew Mitchell.

Hello! I study Japanese Tea Ceremony and was wondering if there were any tearooms that non members can visit.

Hi, we offer informal tours of the Japanese Garden's ceremonial teahouse on the second Monday of every month. It's open to all visitors (not just members!) and is included in general admission. A bit more info here.