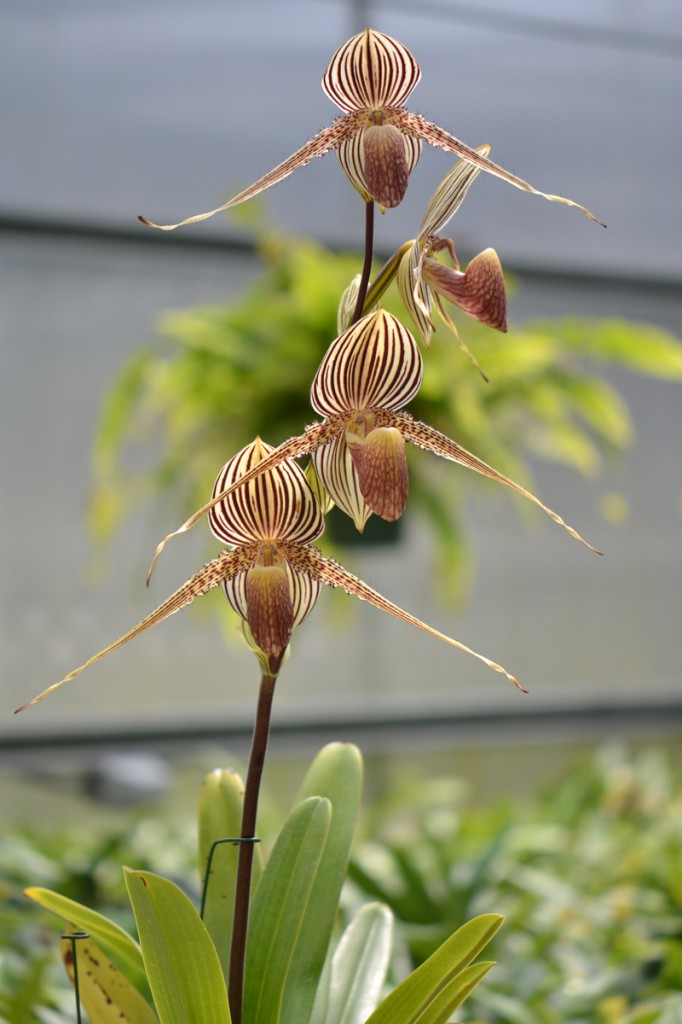 Currently blooming in the orchid greenhouse is Paphiopedilum rothschildianum, an orchid that is on top of the endangered species list and has a history worthy of its nickname. Britain's Queen Victoria was so attracted to Paphiopedilums that people who discovered new species would name them after her, including Paphiopedilum victoria-mariae and Paphiopedilum victoria-regina. In 1887, Paphiopedilum rothschildianum was published by Jean Jules Linden and was officially named after Ferdinand James Von Rothschild, who's family was famous not only for its finance but also for its philanthropy, especially toward horticultural science. You would have to have the world's finest orchid in order to name it after Rothschild, and that's why the horticulturists at that time all agreed that "The King of Orchids" should be named after Ferdinand James Von Rothschild.

Paphiopedilum rothschildianum can be found on Mount Kinabalu in the state of Sabah, Malaysia, at an elevation of 1,500 to 2,800 feet on northeast facing slopes. Under plant taxonomy, it is within the subgenus of Paphiopedilum and the section Coryopedilum. It grows near ravines with large amounts of a specific rock called serpentine. It tends to bloom from April to June, but not always. This species enjoys bright light and requires a dip of cool temperature at night to trigger flower spikes. Cool temperatures at night are also required for other orchids too, such as the Phalaenopsis or Cymbidium, but not every species requires such temperature drops—it really depends on the plant's originating environment and climate.

Even though this plant was introduced into cultivation way back in the 1880s, Paphiopedilum rothschildianum was essentially a lost species for a century because no one could track down its native location. Yet it remained, as it is well known today, the King of the Orchids.

Brandon - P. rothschildianum was lost, but then rediscovered by Sheila Collenette, the famous plant explorer known best for her studies of the plants of the Arabian peninsula. Early in her career she was in Borneo with her husband Peter, an engineer for British Petroleum. The plants made their way to the greenhouse of Prince Philip, an aficionado of paphs, who invited her to tea to thank her for this botanical boon.