ORCHID COLLECTION | Beyond the Blues 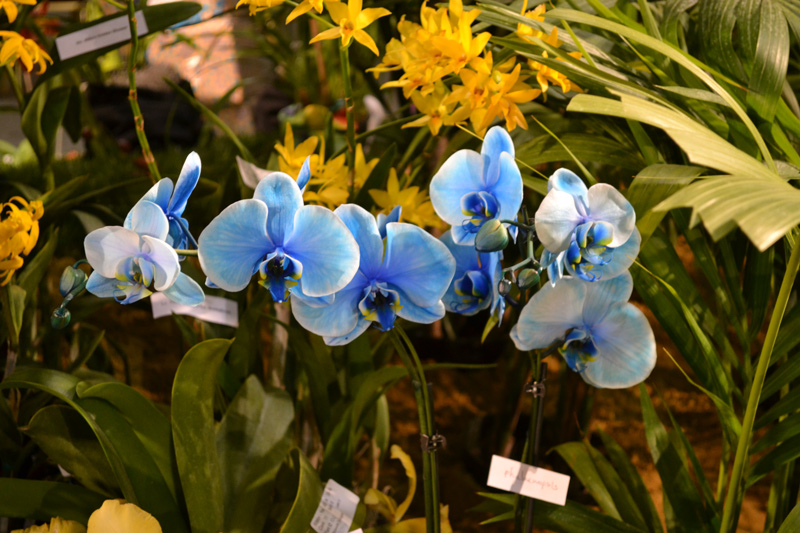 Those who attended the Santa Barbara International Orchid Show in March found plenty to capture their attention, from award-winning plants to big specimens. But if one plant captivated people more than any other, it just might have been the mysterious blue Phalaenopsis orchid on display in the middle of the showground. All weekend, visitors were abuzz, wondering where they could buy their own blue orchid.

Sorry to break the bad news, but no such plant exists in nature. There is really no true blue color for any orchids, although occasionally orchid hobbyists emphasize blueness when describing a range of natural purples.

So what about that blue Phalaenopsis? There are two methods that are most commonly used to dye orchids. Growers will soak a plant in a bucket of concentrated blue dye until the flowers turn blue. This is not the ideal way to dye orchids since they generally do not like to sit in water. Another method is to inject the plant using a syringe, and the dye will eventually be distributed among the cluster of flowers. There are some patented methods of injecting dye within plants in the orchid industry.

The practice of dyeing orchids has a controversial side to it. Some people approve of it because it satisfies their fantasy of a true blue orchid, while hobbyists and purists disapprove. The blue Phalaenopsis has begun showing up on the shelves of home improvement stores and markets typically three times the price of the undyed—or natural—versions. So be careful the next time you spot a blue Phalaenopsis that looks too good to be true.

Hi! i lately purchased "blue orchids" from a local florist who is known to be "clean" : he ordered them from amsterdam ! the new buds indeed are lighter blue which made me wonder if they were dyed instead .I really want to know for sure if they were "dyed" or not :) how can i be sure ? thks.

the blue dyes will only last about 3 bloom cycles and then will start coming back white, however, it's very possible that your nursery dealer was scammed too

Thank you for the blue orchid info. Bonnie and I have been trying to find an explanation of the process, and I came across your site today. It is the most clear, concise, and helpful explanation that I've found.

We just returned to the east coast from LA. It was pure serendipity that I came across your website; we had paid a visit to the Huntington Library during this trip on the advice of local friends. It was our first visit to your marvelous wonderland, and will not be our last.

Thelymitras from Australia are very much natural blue orchids. They also come in white, pink and yellow, and in Spring I have all 4 colours on a path behind my house.