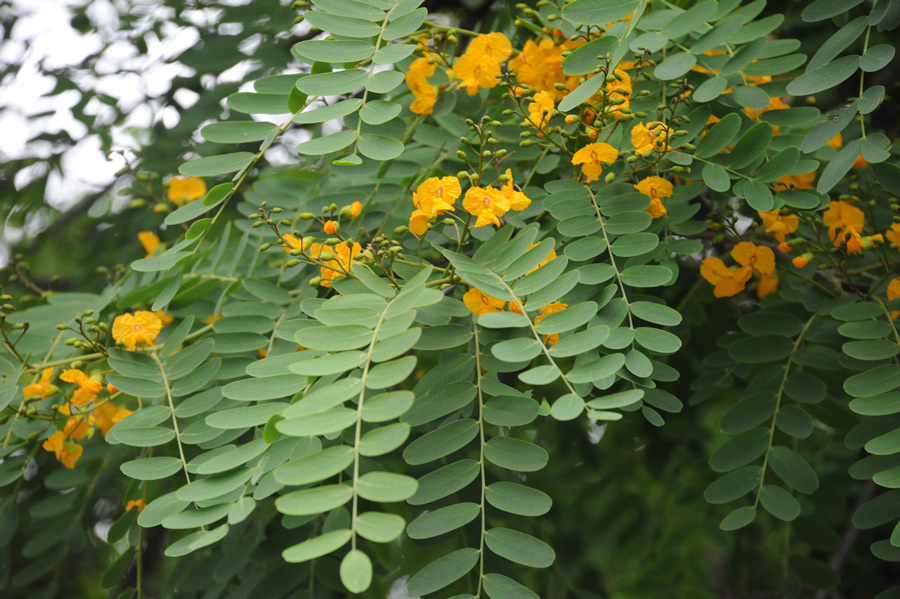 Some plant names sing for me. Tipuana tipu, because it is so curious and alliterative, is in that category. Moreover, it is a pretty good tree for Southern California and has been blooming nicely in the parking lot over the past few days.

Tipu, also called Pride of Bolivia, is a legume (in the bean family) with strong yellow pea-shaped flowers and compound leaves. Unlike most legumes, the seeds do not form in long pea pods, but in winged fruits that must be buoyant enough to be lofted by the strong winds, though most of them end up as fairly extensive mess right under the tree. That should not be discouraging; as with all trees, there are going to be issues. One of our nicest specimens of the tipu tree is in the nonpublic area, at a site where it never receives any irrigation.

The word for the genus Tipuana seems to have the same origin as the specific epithet...., coming from the word "tipu," or in Peru, "tipa," which are common names for this tree where it is native in South America. There are other species of Tipuana, so we know that T. tipu is the one most commonly recognized or mentioned.

It may seem odd that the same word can be used for both the genus and species of a plant, but tipu is not unique. In front of the Library, you can visit three specimens of English oak. This species has long been of importance in Europe and is probably the plant most early botanists thought of when the word "oak" came up in conversation. Thus Linnaeus recognized it as Quercus robur, which mean Oak Oak (Oak in Latin, followed by Oak in Greek.) A little less arcane, the Italian stone pine, known by anyone who has visited Italy and immortalized by Respighi (Pini di Roma in his Roman Trilogy), cannot be missed as the massive-crowned pine on the Subtropical Garden slope. Its name, simply Pinus pinea—the Pine Pine. These reduplicated names are rather neat and certain. You know the archetypal oak is Q. robur, and the archetypal pine is P. pinea, and the archetypal tipu is T. tipu.

How long will the tipuana tipuana tree live and how far apart should they be spaced?