MR. HUNTINGTON'S GARDEN | Out of Sight, But Hardly out of Mind 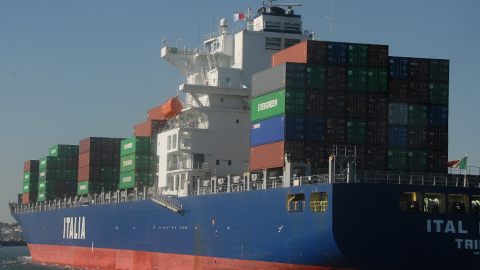 This week many noteworthy events will occur out of public view. Plying the waters of the Pacific, a cargo ship named Victoria Bridge, laden with stacks of metal containers, is scheduled to arrive at San Pedro on Tuesday—nearly two weeks after leaving Kobe, Japan. One 40-foot container on that ship began its journey at Nakamura's workshop in Kyoto, where craftsmen who had restored the wooden elements of Seifu-an (the ceremonial teahouse donated to us last fall by the Pasadena Buddhist Temple) carefully packed them away with the needed copper roofing, finished wooden elements, furnishings, and everything else required to reassemble the teahouse here at the Gardens. Tucked into the same container are the fitted pieces for the accompanying entry gate and waiting bench. Sometime this week we expect to be contacted by customs agents and shipping firms so the container can be delivered to The Huntington for unloading. I can hardly wait to see what surprises are in store for us as we attempt to explain to customs that this is really the same teahouse that had been in the US for over 45 years, we just shipped it to Japan for a little R&R.

Pretty amazing. When I think of it, Seifu-an may be the first teahouse ever to have been crafted in Japan, assembled in the United States, and then disassembled, returned to Japan for proper restoration at the very workshop where it was built, and shipped once again to the United States for reinstallation at a new site. And what a time for Seifu-an to have been in Japan. In light of the tragic March 11 earthquake and tsunami, Seifu-an becomes, for me, a powerful symbol of the resilience and capacity of that island nation in confronting some of the worst events imaginable. Curious to think of that large ship, steadily, perhaps calmly, moving our way on this ocean named for its peaceful nature, when we know what is called the Pacific can become so turbulent and overwhelming. 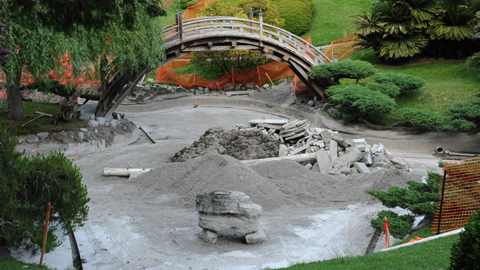 Slightly more visible (yet happening behind the newly erected construction fence), cutting, smashing, and removal will continue as the order of the day for the bottom of the Japanese pond. Impressive is a word I would apply to the 1912 concrete Valley Crest crews are tackling. No wonder this construct has held up for a century. With newly engineered and installed piping and lining, we can hope for a second century of service, as well as a better integrated circulation and filtration system. But for the meantime, there is a lot of concrete to be cut and removed.

In a completely different place, but also behind the scenes, work continues on the Ranch. Crews are readying space so we can relocate containers that mar views and access to the future potager and the demonstration garden. New work paths and area limits will help control views and, along with development of the potager, will remove lingering vestiges of construction that stretch back to the beginnings of the Botanical Center, more than 10 years ago. Yet other quiet activity on The Ranch will be celebrated this week as the board of the California Avocado Society joins staff for lunch in the Botanical Center, so we can thank them for their efforts in creating the Shepherd-Brokaw Orchard—a planting of 33 different historically important avocado cultivars at the north end of the orange groves. This new collection is a significant grounding for the Gardens, as Mr. Huntington is generally credited for having planted the first commercial avocado orchard in California right here, in San Marino Ranch.

Related: Read more about the teahouse and the Japanese Garden renovation project on our website.

Captions: the teahouse is aboard a cargo ship (similar to the one pictured) en route to San Pedro, Calif.; the Japanese Garden pond drained while crews cut and remove 1912 concrete.

My husband and I will be in Pasadena the last week of June.
Will there be any tea house events during this time
I am a student of Chado, The Way of Tea, Urasenke.
Thank you.
Iris