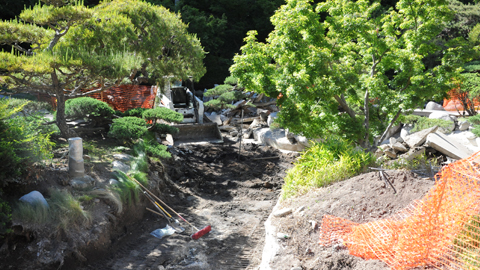 So the story goes that the upper ponds in the Japanese Garden were filled with mud many decades ago, mud carried down the canyon in flash flood waters. And the significant point has been that rather than dig out the mud, workers just let it dry and then capped it with a new concrete pond bottom. Those upper ponds are significantly shallower than the main ponds at the garden center, suggesting the story could be possible. A curious mystery has thus hovered around the upper ponds. Were they added later, and thus not built in the same way as the main ponds? Or are they contemporary to the other ponds, yet somehow modified?

David MacLaren, horticultural curator of the Asian Gardens, explained today that we now know the answer, or at least some of it. Work to remove old concrete began last week in the lower ponds, with crews just reaching the two upper ponds in the last couple of days. And indeed, after knocking out a comparatively thin pond bottom in the first of these upper ponds (the one with a small island and pine tree), workers encountered a sandwich of moist soil on top of a solid concrete second bottom, one that is clearly the original floor of the pond. Now we know—it is no myth that this upper pond has a false bottom. 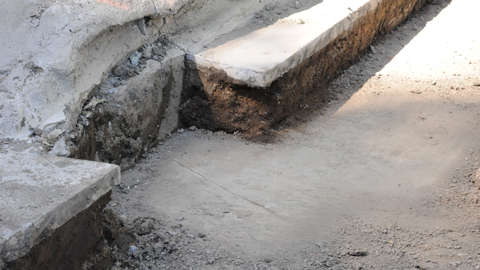 But that doesn't especially mean the rest of the myth is true. It's not credible that gardeners would have simply formed a new concrete bottom rather than removing mud carried in during a storm. We have never been that afraid of work, and we have sacked that much soil out of ponds many times. Inspecting the original pond floor, it is seriously cracked and damaged. Perhaps when that was determined, rather than removing and replacing the original concrete, the decision was made to abandon the cracked bottom and create a new upper waterproof slab, cushioned with compacted soil.

Or there could be another possibility. Astonishingly, David reports that the small island that characterizes this upper pond was not part of the original design. We can see now that soil forming the island was mounded up on top of the original concrete bottom and flows into the thick soil sandwiched between the two concrete layers. Maybe the replacement pond bottom simply sits atop a soil layer created when the island was formed. Perhaps someone thought the soil sandwich would help plants on the island survive. We have no records that explain the challenges or the decision-making process. What we do know is that our predecessors had a firm commitment to concrete. If a little will do the job, a lot more will do it better. And it has, after all, lasted for 100 years.

Related: Read more about the Japanese Garden renovation project on our website.