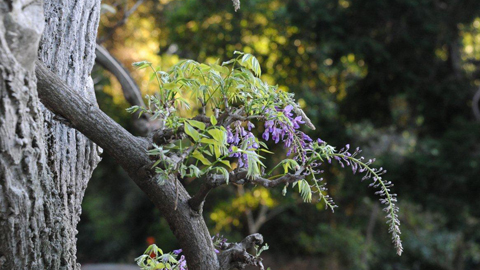 With this posting, I'm beginning an on-going commentary in which I hope to explain the potential mysteries of why change happens (or doesn't) in the gardens, giving fair warning as to what plans and projects are in the offing, and making suggestions as to what corner of the grounds you might wish to explore at the moment. But it shouldn't be a pure diary, a one-way conversation. Rather than relying simply on my ability to guess what questions might be on your mind, it is only fair to invite you to post questions and comments for our response.

Starting with the corners.... It has been a long and lovely spring, almost unbelievably so. There were no sudden, serious freezes or early scorching heat spells to spoil the fun, and rainfall has been better than normal. I feared that the rain a couple of weeks ago would wipe out the flowering of the 'Pink Cloud' cherries, but walking through the Japanese Garden last week, I saw they were still looking cheerful enough, though past peak. The big news, however, is that the wisteria on the faux bois arbor overlooking the road and main garden is just showing color, so the next few days will be worth a visit. Sometimes people call the office to find out when the wisteria will be in bloom; the answer for this year is now. 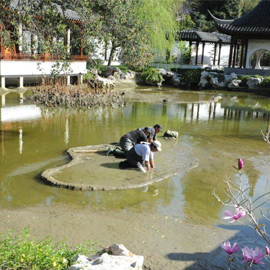 I was down in the Japanese Garden because we are still working on some details of restoration plans. You might have read in the Calendar that this garden closes on April 4 to allow us to complete improvements in time to celebrate the 100thanniversary of its creation next spring. So last Monday, a team of us walked down to examine the area below the ponds, attempting yet again to wrestle one of the last remaining details into submission, which is how and where to filter and pump recirculating water for the ponds. With a tight budget, but an eye on the long-term, there seem to be plenty of challenges. How do you set up the ponds for another hundred years of operation—repairing the liner, restoring the edges and the ancient grotto, installing new piping and systems, allowing for expansion—while keeping the needed pumps and contraptions both available for maintenance and completely out of sight? If you never see them, and the ponds are beautiful, then we made all of the right decisions.

Of course, what you might have noticed at the end of last week was that the ponds were far from beautiful—they were a muddy, sodden mess. David MacLaren and his crew lowered the water level in the Japanese Garden and Chinese Garden ponds in order to transplant the lotus so they would survive during the upcoming construction. As usual, we found more than bargained for, making it clear that the Chinese Garden pond is due for a complete clean out this summer. 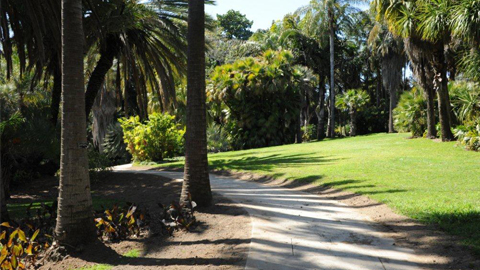 Another project that you might never have noticed in progress is quietly open for inspection—construction of a walkway from the Desert Garden entrance to the Rose Garden. Following the top edge of the slope, the new path passes through the Palm Garden, the top of the Jungle Garden, below the south terrace of the Huntington Art Gallery, and arrives at the path that takes visitors from the Rose Garden into the Subtropical Garden. Shadi Shihab, the curator of floristic gardens, and his staff have a lot of work ahead to resculpt and replant edges where contractor Forrest Hopkins and his crew cut through and formed the path, but the construction barriers have been removed. I encourage you to explore the new vistas this path provides, while also taking advantage of a new route from the Desert Garden to the café.

As we surge toward the end of the month, don't forget to keep some time on your calendar for the California Bonsai Society's show, which will be staged in Friends' Hall on Saturday and Sunday, March 26 and 27.

Captions: Wisteria beginning to bloom on the trellis of the Japanese Garden; a work crew gets ready to transplant lotus in the pond of the Chinese garden; a new trail connecting the Desert Garden to the Rose Garden. Photos by Jim Folsom.

As a disabled photographer who has to travel quite some distance when visiting, I really appreciate the heads up as to what "corner"to visit.I Have my pass and am anxiously waiting for another trip to the gardens. I hope the wisteria is blooming. I know I missed the stone fruit tree bloom.