Large-scale geological features take time, like millions of years. Natural streams and waterfalls emerge after tens of thousands of years of weathering, erosion, and plant colonization. But if you are in a hurry, a waterfall can be had in a month or two—given good planning, a great crew, and some heavy equipment. One is just now happening in the Japanese Garden. 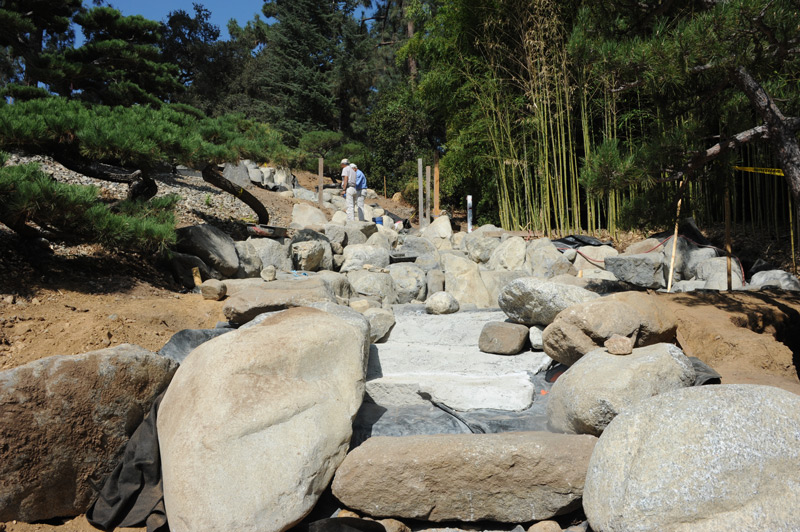 So, how do you "do" a waterfall? First you have to convince yourself that the intervention is more that simply worthwhile. How do you justify the cost of construction and the on-going cost of operation and maintenance? Up front, it has to be a drop-dead wonderful feature for the landscape, which means that nothing else could more perfectly occupy the site. Then it has to be planned. Where, precisely, does the waterfall and associated stream sit, and how does it present itself to the visitor? Who will view and enjoy it, from how many directions? What is the source, and where does the water go? Since water cannot be wasted and has to be recycled, how is the system designed and engineered? How much water is wanted to flow over the tops of stones (in water lingo, this overflow ledge is called the weir), across what width? Is the flow quiet, or gushing? Where is the reservoir that feeds the pumps, and how is it designed so as to contain the moving water when pumps are off? Most immediately important, how does it get built to have a long and beautiful, leak-free, low-maintenance life?

Those are some of the questions we answered before beginning the waterfall currently under construction in the Japanese Garden—a feature that will transform the area south of the Japanese House, connecting the new tea garden (and eventual stroll garden) to the Japanese canyon and existing pond system. By April 2012, it will bring fresh delights to this area. I would guess, however, that "delight" is not a word with much currency at the job site this October. This is a time of hard and thoughtful work, and marshalling of many resources. Tens of tons of huge naturally weathered boulders have been brought to the Gardens. A raw cut was formed in the slope between the Japanese House and the Zen Court, which was compacted, underlain with piping, shelved (to create stages in the waterfall), lined with waterproof material, smothered in cement, and then filled with an arrangement of stones and boulders weighing from 500 to several thousand pounds each. A lot of people have been involved—crews from construction contractors Valley Crest and Pacific Aquascape, and hauling companies, and Gardens staff (David MacLaren and his gardening crew) spent hundreds of hours just getting the infrastructure ready. Then, aided by crane operators, the same people provided full support for landscape designers Takeo Uesugi and his son, Keiji Uesugi, who worked with stone-placement specialist Shimpei Koyama and his assistant Akira Mizutani as each stone was selected, hoisted, and gently muscled into place.

It all looks a bit too rocky right now. But once the sides are tucked in, and the greenery added, this new waterfall will greatly enhance the garden, bring movement and refreshing moisture to the scene, and become something of a destination in its own right.

i lone the gardens