MR. HUNTINGTON'S GARDEN | The End of the Rainbow 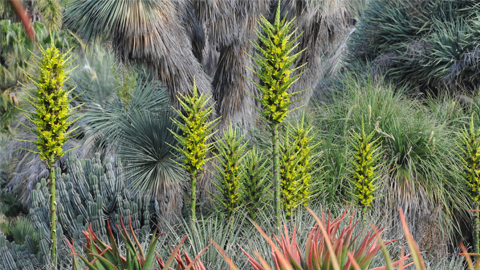 Except for Thursday and Friday, the past week was good for planting. The weather was cool and cloudy on Tuesday and Wednesday morning while Shadi Shihab, curator of floristic gardens, and his crew replanted the Shakespeare Garden with several hundred one-gallon perennials. And on Saturday it was cool again as grounds superintendent Fred Brandt and his crew managed to sink more than 200 five-gallon rhaphiolepis shrubs in the planting verge outside the Allen Gate. But Thursday and Friday were near freak surprises. The skies cleared and temperatures amped up by about 20 degrees, leaving us all to bake in the mid-90s.

It's curious, those days impressed me as seeming so blasted hot. In August we often swelter for weeks with temperatures topping 100 on a daily basis. By comparison, last week's highs weren't severe, but the heat was unseasonable and unwanted, thus practically unbearable. Newly planted material suffered—wilted and drooping. Hardly enough water could be provided to keep stems erect. It reminded me of a weekend in late summer, many years ago, when we were dropping a slew of container plants in the ground for the Lake Phase opening of the Chinese Garden. The day was as hot as you could ever imagine, and there we were, planting hundreds of shrubs and trees. I remember the soft new growth of forsythia bushes melting, even in standing water, and burning on the spot. This week's plantings fared a bit better, though the aquilegia flowering stems now have an indelible kink marking the point at which stems straightened up after having drooped a bit too much. 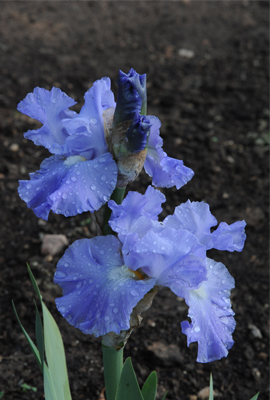 The heat spell made me glad we got the irises planted a couple weeks ago, while the weather was still cool. It would have been brutal setting out and planting that many containers in the full sun of last Thursday. But the new irises are already getting established and the work is paying off with green fans showing a rainbow of floral gratitude—yellow, blue, violet, peach, white. Though no symbolism was baked into the scheme, I was thinking today that our new arc-shaped bands of irises play on the very meaning of the word "iris," which refers to the rainbow and the Greek goddess whose symbol it was.

Heading down to the Desert Garden, however, there is yet another rainbow in progress. We are coming up on mid-puya season. Due partly to the simple need for a lot of space to accommodate these spreading bromeliads, nowhere else will you get to know puyas the way you will at The Huntington. We allocate luxuriant amounts of space to these spectacular plants. This week the payoff is solid lime-colored flowers, moving within days to flowering of the metallic turquoise-blue Puya alpestris. Deep in the garden, midnight blue forms are developing, and near the south entrance yet other bold colors soon will add to the show. Alongside those southern plantings are the orange-flowered dyckias, which, like the puyas, are spreading bromeliads that require a lot of territory. It's R-O-Y-G-B-I-V with a vengeance.

Perhaps a trip to the Desert Garden will soften the annoyance you might feel when arriving at the Japanese Garden only to discover we have been true to our word. Today, April 4, is the final public day for the garden, until late spring 2012. Tomorrow, the construction fences will go up. As fate would have it, we learned last week that this is also the day the teahouse is to be loaded on a freighter in Japan, to begin its journey home. Sort of perfect.