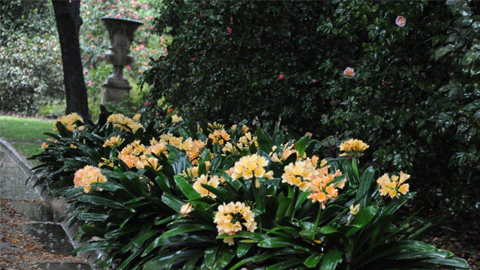 Sunday was a dark and stormy day at The Huntington, but a rainy day is about the very best time to visit the Garden—especially if you pack a camera. Between downpours, I was in the North Vista checking out the clivias, which waited annoyingly until after the Clivia Show last weekend to make much of an appearance. My favorites in that area are clones that produce peach and yellow-colored flowers, partly because those hues seem more comfortable with flower colors of the overstory Camellias.

As much as I truly fancy the more normal, orange clivias, you have to admit that they really do not harmonize with any other known flower color palette. I mean, the strong colors don't bother me so much as to make a real difference in how we plant, but those powerful, rich-orange colors clash with almost anything else, most particularly with the softer pinks and reds that characterize the camellias. It would actually be decent of the clivias to wait until the end of April to flower (skipping the show altogether), when most camellia blossoms are spent. But there is overlap, so we plant the ones with peachy and yellow flowers in the most prominent positions. That is the reason we acquired enough of the clone named 'Victorian Peach' to create a mass along the road between the North Vista and the Library. These plants are in full bloom right now, and glowed in the wet darkness of Sunday's storm. 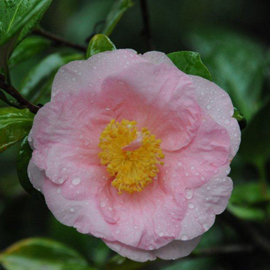 I was glad we had selected this softer color for the area because just down the lane a clear, molded pink camellia caught my attention—from yards away. What fun to discover this was a plant of Camellia 'Henry E. Huntington'—an introduction Nuccios' Nursery made to mark the 75th anniversary of Mr. Huntington's 1919 indenture (the first document to detail his intentions for the institution we celebrate today). This camellia came from a chance hybrid, so its heritage is unclear. Is it a pure Japonica type, or is it a Reticulata? We seem to have claimed both affinities over time. Whichever, a single flower in the gloomy setting was arresting, and reminded me how much we appreciate the work of the Nuccio family.

There are other reasons for checking out the gardens during heavy rain, mostly related to ensuring that drains are not plugged, slopes are stable, and trees haven't fallen and caused harm. I wanted, particularly, to make certain that the new iris beds were in good shape. Last week we planted the remaining containers of more than 400 irises in anticipation of the National Iris Convention in April 2012. As a host for guest plants (mostly newer introductions) that are a highlight of the convention, gardens staff have cleaned up the areas just north of the Bing Children's Garden (the site of our future potager) and installed temporary beds for the display. Iris volunteers Jill Bonino, Mike Monninger, Carol Morgan, and Ivan Craig got the plants all set out and mapped, and Fred Brandt's staff put them in the ground. New fans are emerging, foliage is expanding rapidly, and some flowers are already showing. 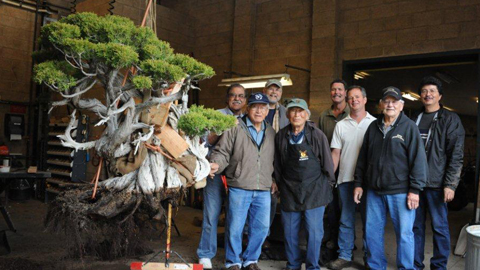 Meanwhile David MacLaren and a host of bonsai enthusiasts spent Saturday morning trying to get one massive California Juniper happily into a pot—a large pot. This tree had been collected from the wild last year by Harry Hirao, Ray Thieme, Richard Ramirez, and Harold Mitchell and then donated to the bonsai collection for future training.

And, of course, to complete the cycle of moving plants, a lot of effort and investment was dedicated to yet another project this week—excavating, boxing, and removing several large trained pines from the Japanese Garden scree slope. The Huntington has hired Valley Crest to oversee construction that begins on April 4 with closure of the Japanese Garden to the public. In its new incarnation, the garden will need all of these trees, and more. But they will hold court in new locations and settings. It is all more kinetic that one imagines.

When you look at the landscape, there is a pervasive sense of calm and permanence, but this past week the gardens seemed like a great stage, awash with rain storms and alive with the movement of so many plants coming and going in about every conceivable manner.

Captions: 'Victorian Peach' clivias growing along the road between the North Vista and the Library; Camellia 'Henry E. Huntington'; a massive California Juniper ready for a new pot. Photos by Jim Folsom.

Great reflections, Jim. The gardens are such an exciting place these days. I've had several opportunities to take guests to the Chinese Garden and have really loved the visits.