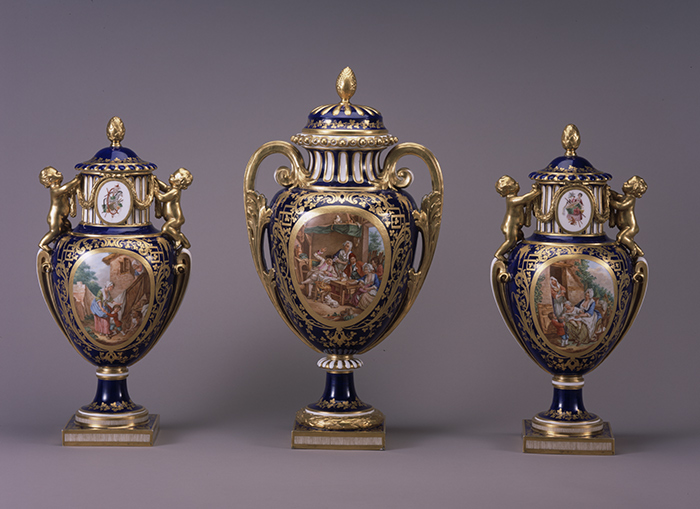 Royal Porcelain Manufactory, Sèvres, Garniture of Three Lidded Vases, c. 1781. This extravagant set of porcelain once belonged to the Countess Carnarvon, the real-life inhabitant of Highclere Castle, the house portrayed in "Downton Abbey." She also owned the paintings and other decorative objects shown below. You can find the porcelain on the second floor of the Huntington Art Gallery, in one of the four rooms devoted to the Arabella D. Huntington Memorial Art Collection. The Huntington Library, Art Collections, and Botanical Gardens.

If you’re one of the millions of people who watched the British period drama “Downton Abbey,” you might be craving a juicy story about a lord or lady right about now. “Downton” led viewers on a rollercoaster ride as the titled Crawley family—and their (mostly) faithful staff—navigated the emotional waters of forbidden desire, shattering heartbreak, blackmail, illness, and death. Then in March, the final episode aired. What’s a devoted follower to do?

You may be interested to learn that The Huntington possesses a group of objects once owned by the Countess of Carnarvon, the real-life occupant of Highclere Castle, the English country house portrayed in “Downton Abbey.” The pieces include some gems of 18th-century artistry—including three British oils, some extravagant Sèvres porcelain, and several precious pieces of French furniture.

The tale behind these objects and how Henry E. Huntington got his hands on them is one that rivals the storylines in “Downton Abbey.” Well then, as Countess Grantham would say before moving from one one grand room to another: “Shall we go through”? 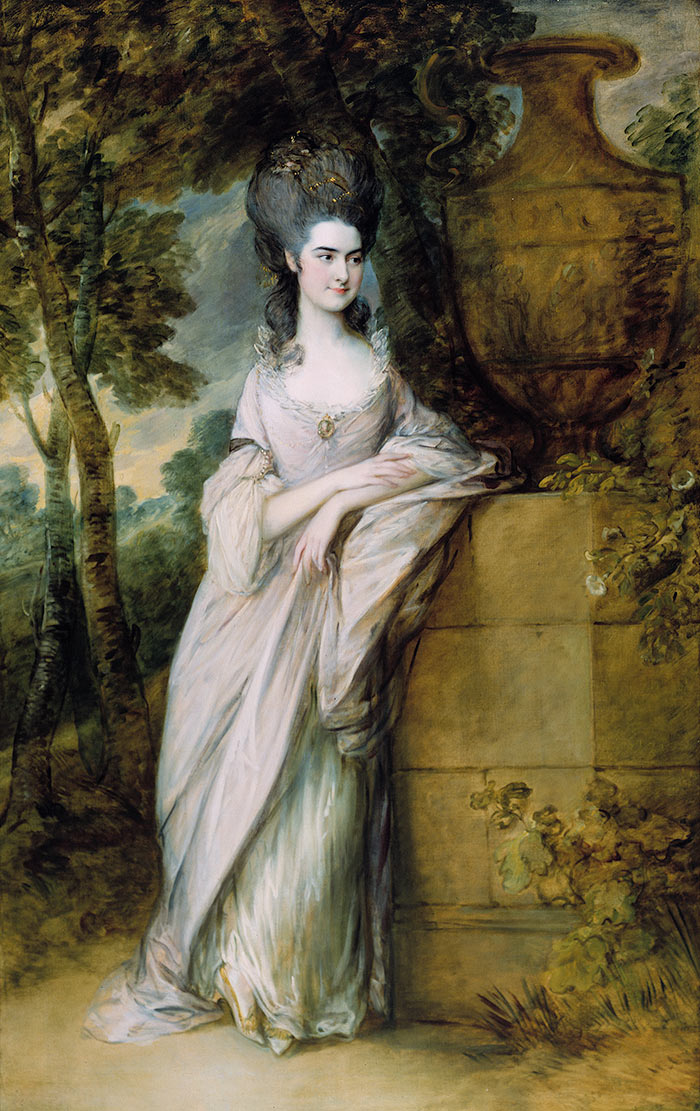 Thomas Gainsborough, Henrietta Read, c. 1777. The painting is installed on the ground floor of the Huntington Art Gallery, facing the central staircase. The Huntington Library, Art Collections, and Botanical Gardens.

It all started in 1895, when the 5th Earl of Carnarvon, George Herbert (1866–1923), married Almina Victoria Maria Alexandra Wombwell (1876–1969), making her a countess. The 19-year-old Almina was the daughter of wealthy French banker Alfred de Rothschild and his mistress, the married Marie Boyer Wombwell. Upon her marriage, Almina received from her father a dowry of half a million pounds—a huge sum in those days. (Downton fans may remember that it was the fortune of heiress Cora Crawley (née Levinson) that supported that splendid estate.)

In the case of the Earl and Countess of Carnarvon, there was more to maintain than just a huge house. The Earl was a passionate Egyptologist who used his wife’s wealth to finance years of painstaking excavations in the Valley of the Kings. Indeed, it was the 5th Earl of Carnarvon who accompanied English archeologist Howard Carter when he first peered into the tomb of King Tutankhamun in 1922.

In a Downton-like twist, not six months later, Lord Carnarvon would be dead. Officially, the cause was an infected mosquito bite that had turned into pneumonia. Many people at the time, however, chalked it up to the “Mummy’s Curse.” 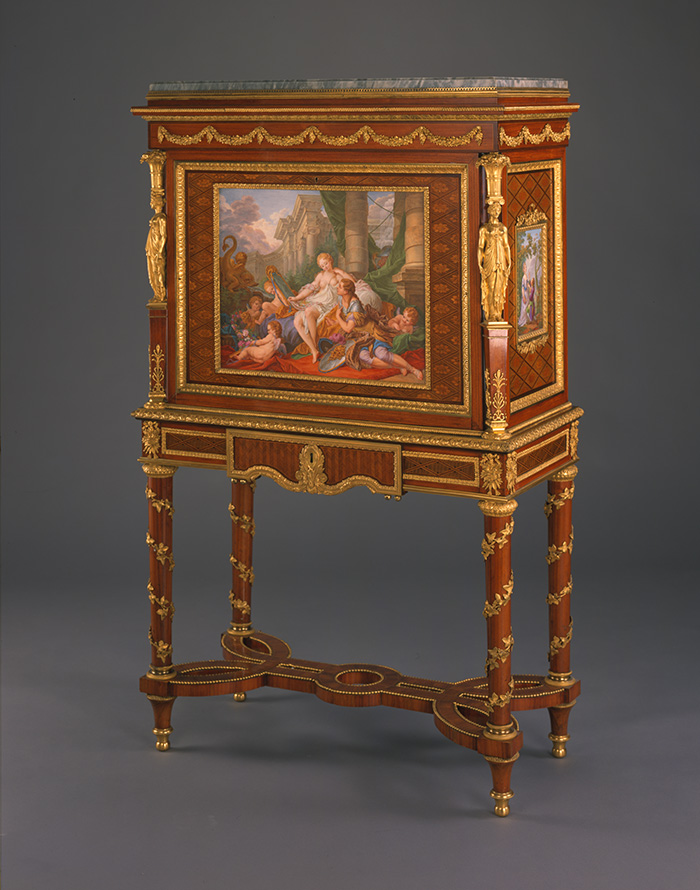 Bernard Molitor, Fall-front Secretary, ca. 1812–1816, with plaques produced by Sèvres Porcelain Manufactory and painted by Charles Nicolas Dodin, dating from between the 1770s to early 1780s. You can view it on the second floor of the Huntington Art Gallery, in the same room as the Sèvres vases (see above). Arabella D. Huntington Memorial Art Collection, The Huntington Library, Art Collections, and Botanical Gardens.

More turmoil awaited the Countess. In 1923, she remarried, this time to Colonel Ian Onslow Dennistoun. When his former wife learned of the Countess’s riches, she sued him for alimony. The resulting trial revealed scandalous aspects of the Colonel’s earlier marriage, providing rich fodder for the newspapers of the day.

Ultimately, the court cleared Dennistoun of financial responsibility. Still, the demands on the Countess’s riches clearly continued, because between 1924 and 1927, she began to sell some of her most valued possessions. Most of them were collected by her father, Alfred de Rothschild. He had died in 1918 and left his homes, paintings, and other precious assets to his daughter, the Countess, and to his nephew, Lionel de Rothschild. 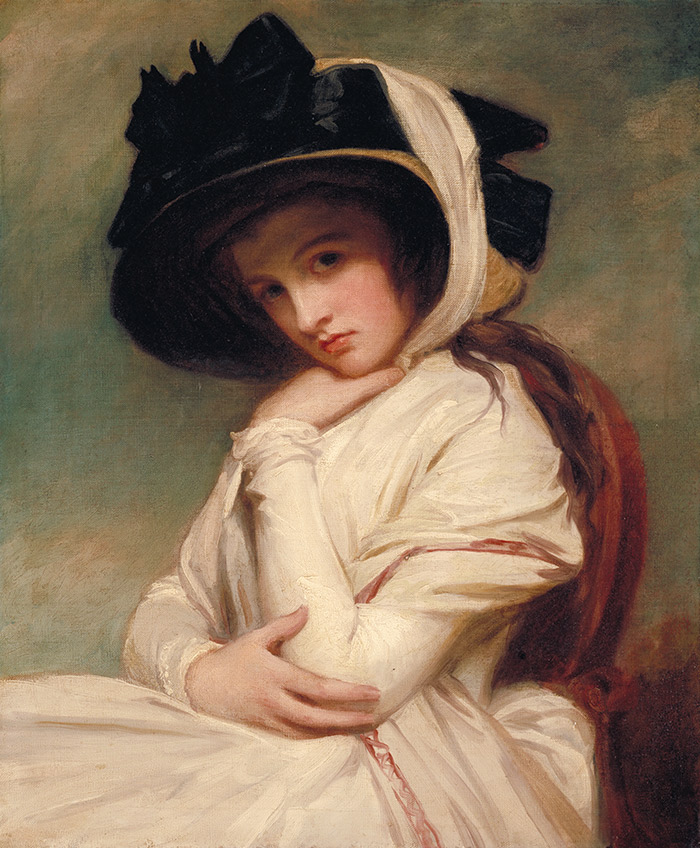 George Romney, Emma Hart, later Lady Hamilton, in a Straw Hat, ca. 1782–1794. The painting is installed on the ground floor of the Huntington Art Gallery, above a chest of drawers in the dining room. The Huntington Library, Art Collections, and Botanical Gardens.

Meanwhile, back in San Marino, Calif., Henry Huntington had lost his beloved wife, Arabella. He decided to amass a collection of paintings, sculpture, furniture, textiles, and porcelain—mostly 18th-century French objects—that would form the basis of the Arabella D. Huntington Memorial Art Collection. Only the best would do, and so Henry turned to his usual point of contact, art dealer Joseph Duveen.

The objects from Countess Carnarvon made their way to Henry, sometimes via auction, but ultimately through Duveen, and can be viewed today dispersed throughout the Huntington Art Gallery. Several pieces are located in the period rooms on the ground floor; others, on the second floor, where four rooms are devoted to the memorial collection for Arabella.

And that, dear readers, is our Downton story. But wait, what happened to Countess Carnarvon? There’s not much information about her later years. We know she died in 1969, at the age of 92, in quite diminished circumstances. But oh…what a life! 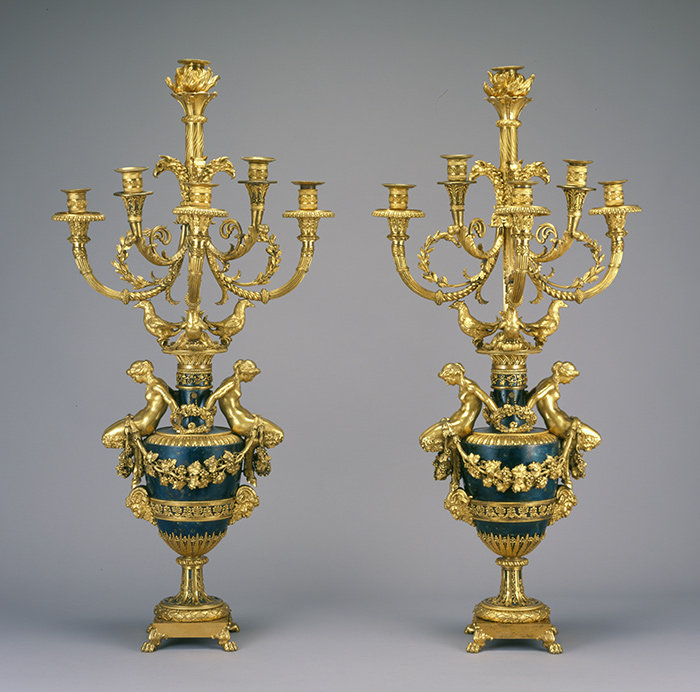 François Rémond, Pair of Six-light Candelabra, c. 1780. This ornate pair of gilt bronze candelabra are on the ground floor of the Huntington Art Gallery, on either side of a doorway in the large drawing room. Arabella D. Huntington Memorial Art Collection, The Huntington Library, Art Collections, and Botanical Gardens.