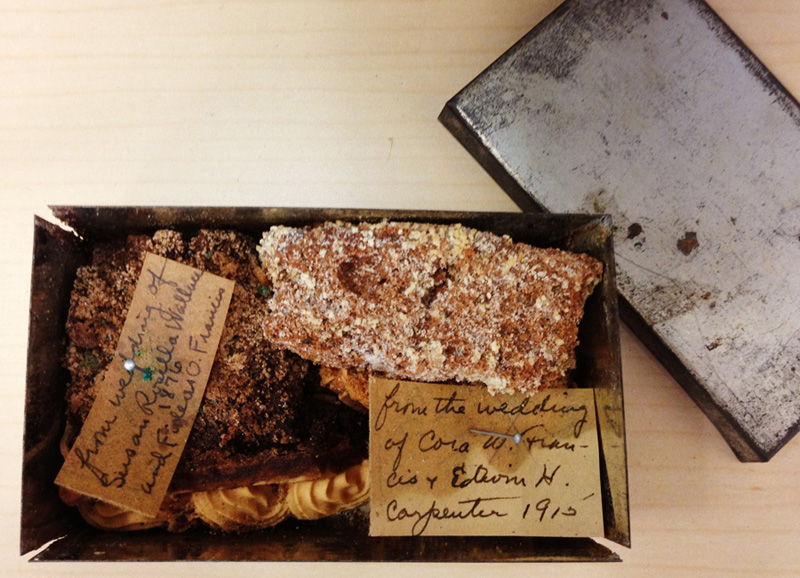 Bits of wedding cakes from 1915 and 1876, recently featured on our Tumblr.

A few months back a volunteer in our manuscripts department came across a rather unusual item in the uncataloged papers of Edwin Carpenter, Ph.D., who was a bibliographer, librarian, and editor at UCLA, The Huntington, and the New York Public Library. Among the genealogical research, correspondence, and essay proofs was a small tin box containing little cubes of wedding cake. Each piece is identified—one from his parents (Edwin Carpenter Sr. and Cora Francis, 1915) and one from his maternal grandparents (Susan Rosella Wallace and F. O. Francis, 1876).

Ed was an employee here from 1946 to 1947, and then again from 1960 until his death in 1995. He started as a reading room attendant and later worked for the Huntington Library Press. At the time of his death, his title was “lecturer.” He sat at the reception desk; wrote articles and presentations on Los Angeles history and the Huntington family; did some freelance copy editing; and indexed everything he saved. Ed corresponded with a lot of the major librarians of his day and wrote copious letters to his mother during World War II.

His collection has been in the stacks since it was donated in 1995, but until our volunteer—Peggy Park Bernal, the former director of the Huntington Library Press—expressed interest (and enthusiasm and excitement), it was relegated to the bottom of my processing list. Peggy has been working on processing the collection for ten months, coming in for a once-weekly dose of Ed. 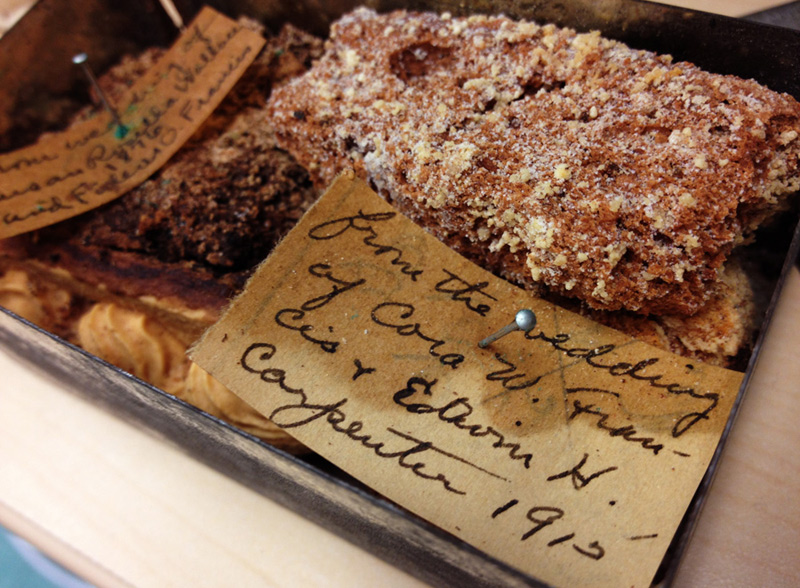 My plan for the box of cake was to document it and then throw it away. After all, food has very little research value, and The Huntington primarily deals in manuscripts, rare books, and the like. We try not to collect objects, and cake has no place in an archive (just ask any book or paper conservator). But Peggy was reluctant, so it stayed on her desk. Last week, she e-mailed me a blog post from the Smithsonian about its new exhibition, “Souvenir Nation: Relics, Keepsakes, and Curios,” which includes a piece of FDR’s birthday cake.

We posted a photo of the cake on The Huntington’s Tumblr, where it met a warm reception—more than 4,000 views (and counting), thanks in part to nods from other libraries’ and special collections’ Tumblrs, some supportive Seinfeld-related tweeting—and, to my surprise, a celebrity fashion watchdog site that I’ve been following for years.

I thought, “Peggy’s right. Do I really want to throw this away?” Someday I want to do an exhibition of our wacky objects (trust me when I tell you every archive has crazy things), and this would fit so nicely next to the weaponry and pictures of dogs.

So with the Tumblr cake post in hand (on my phone), I sat down for some fresh cake with our chief conservation officer. After explaining the situation, and waiting for her to get over the fact that there has been 100-year-old cake in her stacks, she agreed to take a look at it. And to bag it up immediately. 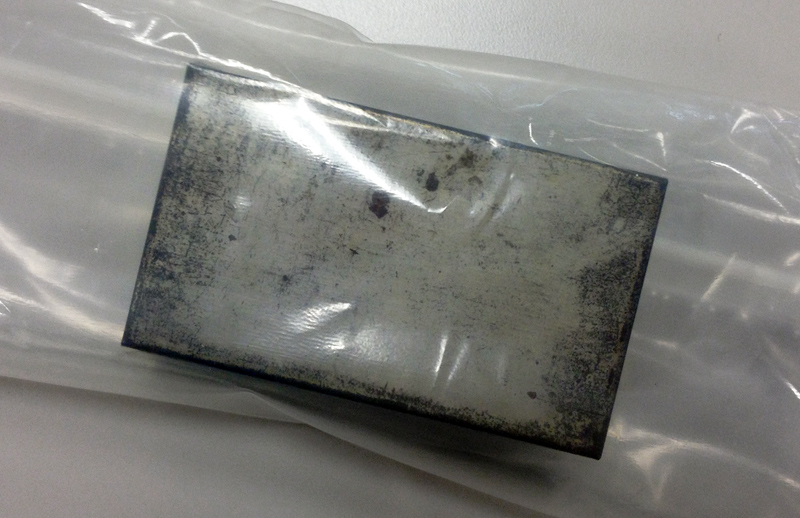 The tin of cake, temporarily bagged up and awaiting further attention from our conservation team.

Peggy is right. So much research ignores emotion, without which, most of history would not have happened. I was taken aback by Jennifer's comment about simply recording and tossing the cake. The people at the Smithsonian have a collection because people collected and saved all of it in the first place, and It does include everyday things that meant a lot to the people who owned them. Things that really counted and people should see them. I'm not surprised this struck a chord with so many readers. Thumbs up to Peggy!

I am very much the historic cemetery crawler; the Mother Lode country roses would would certainly interest me; do we have any in our gardens? Which was the cemetery in downtown LA which had been covered up that Ed was walking? I am writing an early LA novel including the character Thomas E. Buzbee, who died in 1883 at a the age of 18: Thomas is buied Row 1. Plot 1 in the historic Evergreen Cemetery in East LA, according to the county records of the Potter's Field.

I inherited the piece of wedding cake from my grandparents' wedding reception circa 1943. I'd always assumed it was a fairly unusual keepsake but one born out of the circumstances of their wedding. They eloped during wartime, so there were none of the usual trappings of a wedding--dress, veil, garter, bouquet or guestbook. The slice of dessicated cake and the topper are the only remnants of the reception my great grandparents held in their honor once my grandfather came back from war.

Ed and I had many conversations over the years when I became interested collecting and conserving roses from a number of historic Mother Lode cemeteries. Among his varied interest were a fascination with historic and pioneer cemeteries. I remember one day watching a local TV station evening news item and recognizing Ed's shoes walking across a downtown LA parking lot with Ed Carpenter's voice over discussing this particular historic cemetery which had been covered over with macadam for many years and long forgotten. He once shared a pamphlet he had written about his family's moving by car from the east to California when he was around five years old. There was a photograph of Ed sitting on a child's portable potty in the middle of the road crossing the Mojave desert.

Ed was a wonderful presence through many of my years doing scholarly work at the Huntington. How nice that this eccentric object should be another way to remember him!

In England, where I was brought up, small squares of the wedding cake used to be cut up and mailed in specially designed little cardboard boxes to family and friends who could not be at the wedding. In the past travel and its costs prevented distant relatives and friends from coming. The cake was a solid fruitcake with icing that lasted well. Part of the tradition was that when an unmarried girl put the cake in its tiny box under her pillow, she would dream of her future husband! Obviously today's cakes would not last like old-fashioned fruitcakes did.

I can’t help but think that Ed would have chuckled as I did when reading this wonderful blog post. And then he would have put the cakes in context with a very long story about the cakes, his parents, his maternal grandparents and most importantly, why he saved these family heirlooms. I'm grateful to be processing Ed's archive as he was a friend, colleague and an important resource for me when I started working at the Huntington many years ago. Much of Ed's Huntington and Los Angeles history research is documented but so far, I have not found anything in his papers about these cakes. I will keep looking. :)