Kevin Starr Lives on at The Huntington 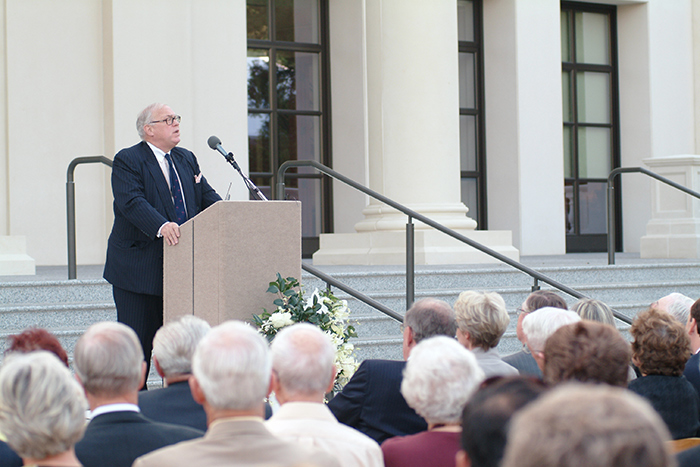 At the dedication of The Huntington’s Munger Research Center in 2004, California historian Kevin Starr (1940–2017), who died in January, said, “Southern California contemplates itself, defines itself, brings itself to further identity through a variety of agencies and instruments: its newspapers, its artists, its essayists and novelists, its historians, its filmmakers, its public television, its foundations, its research universities and libraries . . . In this roll call of agencies and instruments of regional self-understanding, no institution is more important than The Huntington Library, Art Collections, and Botanical Gardens.”

Kevin was in the perfect position to opine on the importance of adding the Munger’s 90,000 square-feet of space to a library in which he had conducted research for such seminal works as Inventing the Dream: California Through the Progressive Era. He was a fourth-generation Californian and California’s State Librarian for a decade. Thinking back on his words now, I recall a great colleague, a mentor, and a close friend who deeply loved The Huntington.

Kevin and I talked of the institution often, and his regard for this place sprung from many wells. He loved the history of The Huntington and the towers of history housed within it. He knew the long-serving staff, and he valued them because their tenure meant that they, too, appreciated institutions and how loyalty could be forged within them. He loved literature and art and England, and he loved that he could learn about all of these things at the foot of the San Gabriel Mountains and mere miles from the venerable San Gabriel Mission. 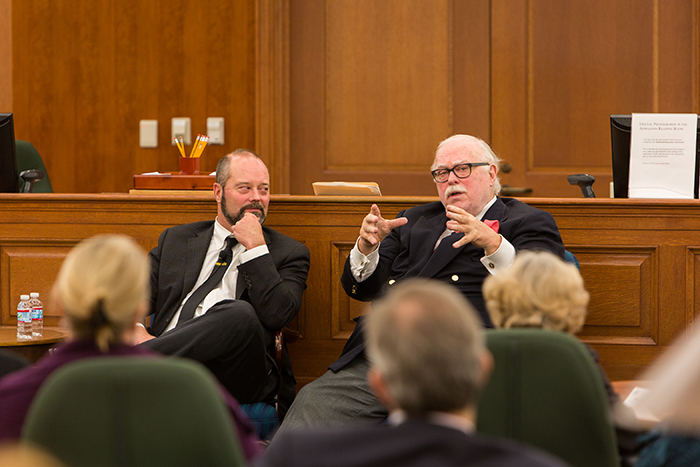 William Deverell, left, and Kevin Starr at a 2014 event in The Huntington’s Ahmanson Reading Room, celebrating the 10th anniversary of the Huntington-USC Institute on California and the West. Photo by Brian Morri/211 Photography.

Kevin could feel the past here. He had a kind of scholarly radar, and a deep, intimate familiarity with the California past. He studied it, he wrote about it, and he kind of lived it, too. He drew inspiration from the past, its lessons and its triumphs, perhaps more so than any other historian I knew. He could even feel the presence of Henry Huntington. It was as if the founder had just left the scene only moments before, and Kevin could think learnedly of what it must have been like for Huntington to arrive, more or less permanently, from San Francisco, something Kevin did too, more or less.

In his mind’s eye, Kevin could see the entire cast of characters who made this place what it is today. He could see architect Myron Hunt, who built Huntington’s mansion, and James de Barth Shorb, the property’s previous occupant, and he also saw those early Caltech leaders who helped convince Huntington not to take his library and his art back east. Ever attuned to the makings and markers of “a civilization,” Kevin knew that The Huntington and Caltech arose together because the overlapping leadership of each saw synergies of research and knowledge in making something big happen in Southern California at the frontiers of scientific and humanistic knowledge.

Kevin loved The Huntington because it was also about so much more than California. He loved the sheer pomp of a place that showed off its Gutenberg and its Chaucer, and that put on an annual ball beneath the stars. He exalted in talking with scholars of British history. If anyone cared to talk American literature, he or she would find in Kevin a conversation partner brimming with as much exuberance as erudition. 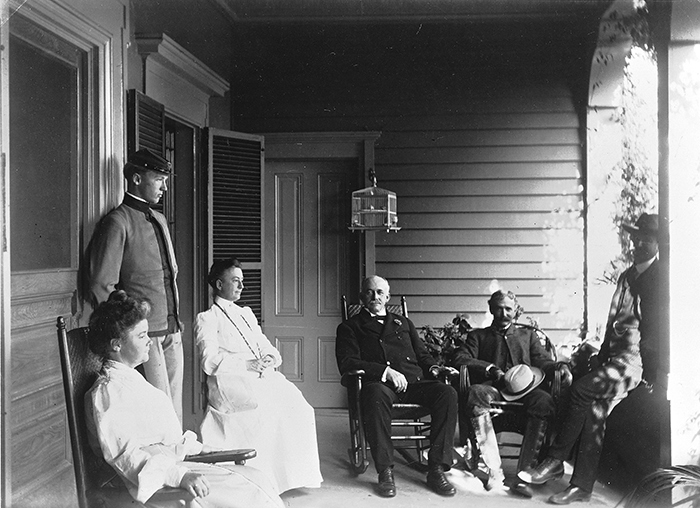 In his 1985 book Inventing the Dream: California Through the Progressive Era, Kevin Starr included this 1903 photo of Henry Huntington (third from right) visiting the family of the future World War II general George S. Patton, Jr. (second from left) at Lake Vineyard in San Marino. In his caption, Starr wrote: “. . . Henry Edwards Huntington, then busy linking the Los Angeles Basin with a network of high-speed electric streetcars, paused for a moment’s repose . . . [with] the family of Huntington’s land manager, George S. Patton, Sr. [second from right], onetime district attorney of Los Angeles County. Languidly regarding the scene is George S. Patton, Jr., then in the process of transferring from VMI to West Point.” The Huntington Library, Art Collections, and Botanical Gardens.

Pulitzer prize–winning American writer Hamlin Garland (1860–1940) rests somewhere below decks in the Munger, or at least his diary does, and I was present during more than one conversation in which Kevin proved that he had read the whole thing. He loved Jack London, who also rests here in print and photograph, probably because Kevin’s beloved San Francisco Bay helped forge the boy into the man, the “oyster pirate” into the loud, proud voice of American protest born in the West. He once engaged me over an hour’s lunch, talking, mostly, about the intellectual candlepower of a single scholar of medieval history with whom he’d shared coffee that morning in the old coffee lounge, the Footnote. An Irish friend asked me once “who is that man, Bill?” after Kevin revealed he knew a great deal about Ireland’s Easter Rising and about Tom Clarke, the American martyr to the Irish cause.

Kevin knew libraries. I would wager that Kevin holds the record for most libraries visited in the state of California. He liked them big and small, and he saw anyone who worked in a library as a fellow laborer in the fields of culture and knowledge; for a man who knew and loved guilds, the library guild was among the most cherished and treasured.

Kevin redefined “bookish.” For him, the label encompassed his bonhomie for book clubs, the inspiration and lessons he found in the past, the hope he had for the future by way of the stories he told and uncovered, and the enduring meaning and utter indispensability he found in libraries.

Just as he could see into the past around here, and conjure up Mr. Huntington in his mind for a chat, I’m finding that I too can conjure up Kevin. His presence lives on, in his erudite words which still echo (loudly!) in these grand reading rooms and stacks. He’s still here in his ideas and his books and his enduring love for places like this, and that’s some comfort. 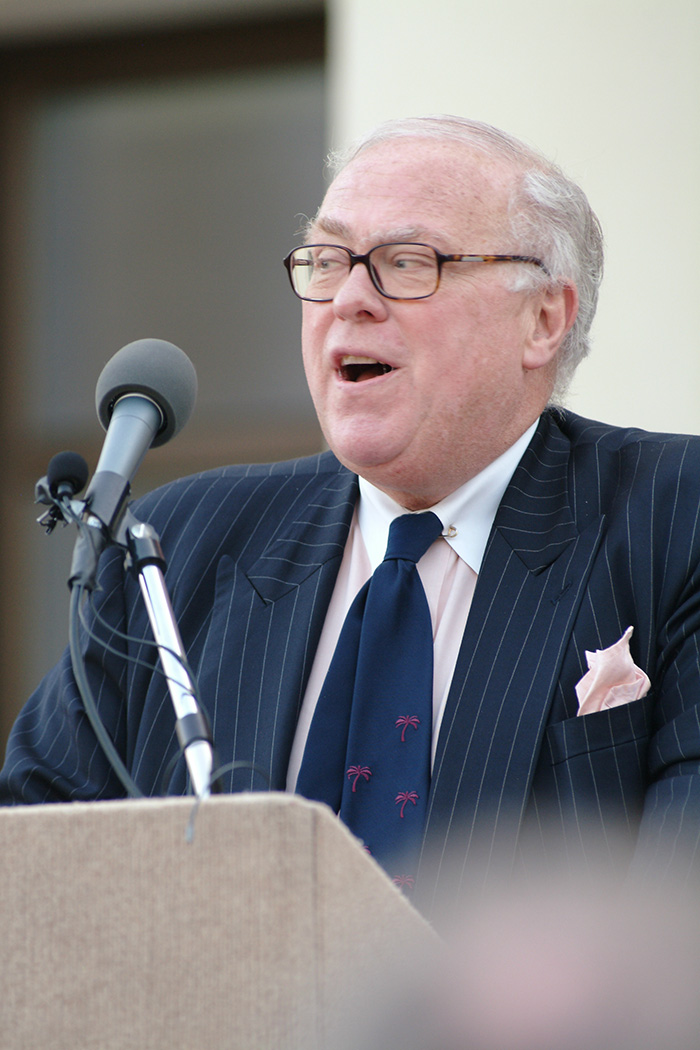 Kevin Starr at the dedication of The Huntington’s Munger Research Center, Sept. 13, 2004. Photo by Don Milici.

William Deverell is director of the Huntington-USC Institute on California and the West.

Excellent remembrance. Kevin and I were graduate students together and friends.
It captures him perfectly.