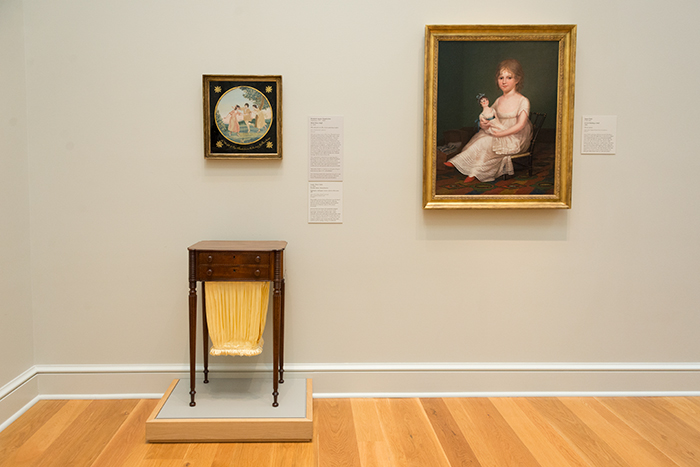 I’m a junior at Princeton University studying art history, with minors in European cultural studies and humanistic studies. I spent the summer as an intern in The Huntington’s American art collections to gain a deeper understanding of how an art museum functions. One of my projects was preparing object files for 18th- and 19th-century furniture in the Virginia Steele Scott Galleries of American Art. In preparation, I took a tour with Hal Nelson, the former curator of American Decorative Arts at The Huntington, just before he retired. He opened several pieces of furniture so I could see their interiors. It was fascinating to see the hidden parts of these objects! For preservation reasons, inside compartments of furniture generally can’t be displayed. I figured that visitors would be interested in learning about these unseen elements and seeing some photos of them. Here are some of the secrets I discovered about two tables and a secretary. The Lady’s Work Table (circa 1810), a small table with a large pouch underneath, was used for writing and sewing, though I was confused about exactly how. What part did women write on? How was the pouch accessed?

It turns out that the first drawer contains a writing tablet covered with green baize—a woolen material sometimes used on billiard tables and card tables—that can be lifted at an angle. The fabric kept pens from embossing the wood of the table. There are also small compartments to hold writing instruments, such as ink bottles. The second drawer is bare now, but it once held compartments to store sewing tools. Underneath this drawer is a thin wooden frame; when the frame is pulled, it reveals the opening to a silk pouch—a reconstruction of a 19th-century pouch that would have held needleworks in progress. The worktable is lightweight and easily transported, which allowed women to move the table to take advantage of good lighting. It belonged in a parlor or sitting room where guests were entertained. The worktable showed off a woman’s skills and education—something to impress suitors. A young woman’s education in this era included two types of sewing: plain sewing (useful sewing needed to run a household) and fancy needlework (decorative sewing that let women display their artistic talents). 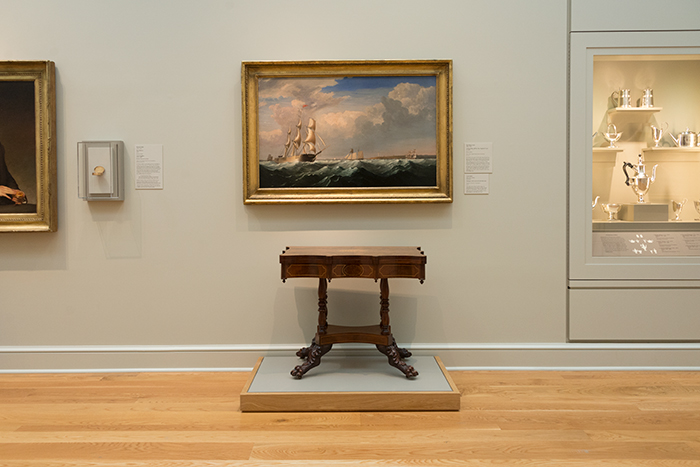 The mid-19th-century mahogany Card Table is one of many such tables collected by Henry E. Huntington. When closed, it shows a wavy design that matches the seascape hanging above it (Sailing Ships off the New England Coast, circa 1855, by Fitz Henry Lane). The inlay of the table is what I find most beautiful. When the table is open, you discover an inlaid satinwood playing card in each corner. Each card is an ace of a different suit—a red heart, a red diamond, a black club, and a black spade.

Left: The surface of Card Table has a wavy design that matches the seascape that hangs above it in the gallery. Right: The fully opened Card Table reveals inlaid satinwood playing cards in each corner. Card Table, mid 19th Century. Unknown maker, American. Mahogany with satinwood and holly inlay. The Huntington Library, Art Collections, and Botanical Gardens. Photos by Kate Lain.

All of the card tables at The Huntington are shown in a closed state—partly because, when folded open, they take up twice the space. People would have played cards on this larger surface. Historically, the tables were meant to be closed and pushed against a wall when not in use. Many Americans in the 17th and 18th century looked down upon playing cards because they were linked so closely to the dangers of gambling. But they were still very popular, and Edmond Hoyle’s Games(several editions of which are at The Huntington) was first published in the U.S. in 1796. By the mid-19th century, card games had become better regarded and even fashionable, with people in various social classes playing them. Popular games likely played on this table included whist, loo, faro, and quadrille. 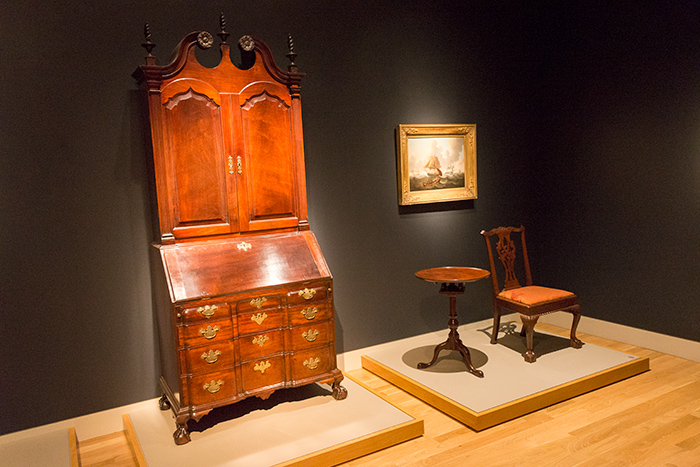 The Desk and Bookcase(1765–1775), also referred to as a secretary, is full of secrets. The desk contains four pigeonhole compartments, eight small drawers, and a wooden door that leads to a lockable box called a prospect, which can be removed from the desk entirely. Some of the prospects inside secretaries were so well hidden that they were not rediscovered until the 20th century. This secretary was a precursor to filing systems and safes. In an era when money was kept at home, not in banks, paper records had more importance, and it was common to use a promissory note as a kind of IOU. Precious documents and valuables would have been kept locked inside such a piece of furniture. Looking at the secretary from the outside, I never would have expected to find so many wonderful secret compartments inside. 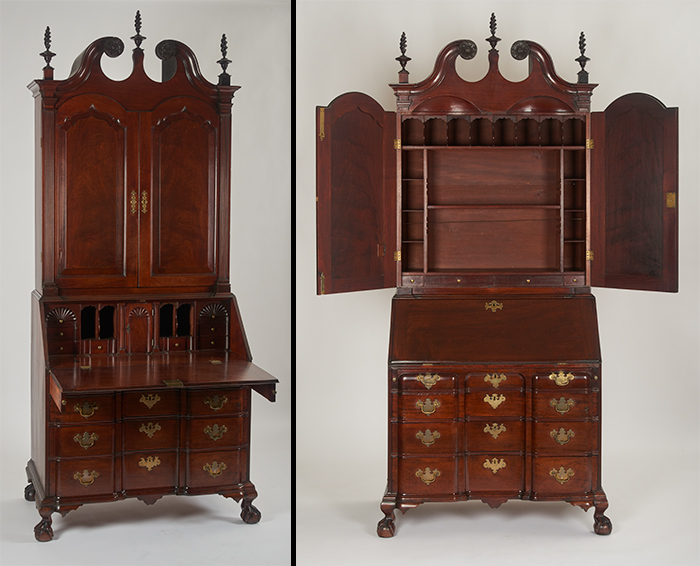 As a fun side note, there are several inscriptions inside the Desk and Bookcase. One reads “Harvard College” (where it was kept for a while), and others reveal names of past owners, including “T. Greenleaf 1804,” a wealthy merchant and sheriff. There are many more hidden elements in decorative arts items at The Huntington. I found these three pieces particularly fascinating because they either showcase aesthetically beautiful elements or make an object’s function clearer. I hope you’ve enjoyed my behind-the-scenes description. Just a reminder: please don’t touch any of these works. These pieces were handled by experienced curators when they were photographed for this story, and The Huntington wants these art objects to last well into the future! Julia Cury, an undergraduate at Princeton University, served as a curatorial intern in the American art collections at The Huntington.

This article says as much about the writer, as about the subject matter. Good job!

Interesting post! It's really neat to get an in-depth look at these objects.