Before leaving the foyer of the exhibition “Visual Voyages: Images of Latin American Nature from Columbus to Darwin,” take a moment to examine two glass cases filled with tiny, exquisite hummingbirds frozen in motion. They are remarkable replicas of displays first created at the time of the Great Exhibition of 1851 in London. English ornithologist John Gould placed 24 such cases in an attraction called the Hummingbird House, showcasing the wonders of bird life in the Americas to excited crowds in Victorian-era London. The creators of these modern-day displays are taxidermist Allis Markham of Prey Taxidermy, and John McCormack, director of the Moore Lab of Zoology at Occidental College, which supplied 30 specimens representing 15 species of hummingbirds from their collection of almost 65,000 bird specimens. We asked them about what went into making the displays. 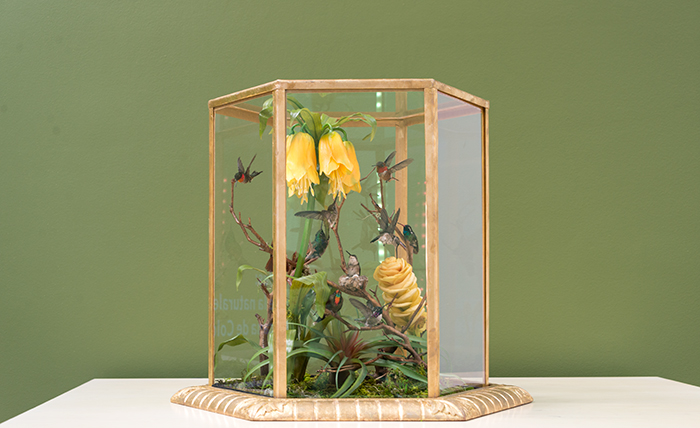 Taxidermist Allis Markham chose this lush, tropical flora based on an article that the novelist Charles Dickens wrote after seeing the original 1851 hummingbird cases. Photo by Kate Lain.

Q: How much information did you have about the original cases? Markham: Six of the 24 original cases still survive in the Museum of Natural History in London. I pored over photos and read multiple accounts. One of my most valuable sources was author Charles Dickens! It turned out that he attended the exhibition and wrote a detailed article called “Tresses of the Day Star” for his weekly newspaper, Household Words. I had suspected that the original plants were lusher than the dried twigs and leaves I had seen in the photos. Sure enough, Dickens describes a luxuriant, tropical scene: “They hang amidst fuchsia flowers, or float over beds of bromelia . . . . They dart long beaks into deep, tubular flowers, hovering beneath the pendant bells.” My displays reflect that! 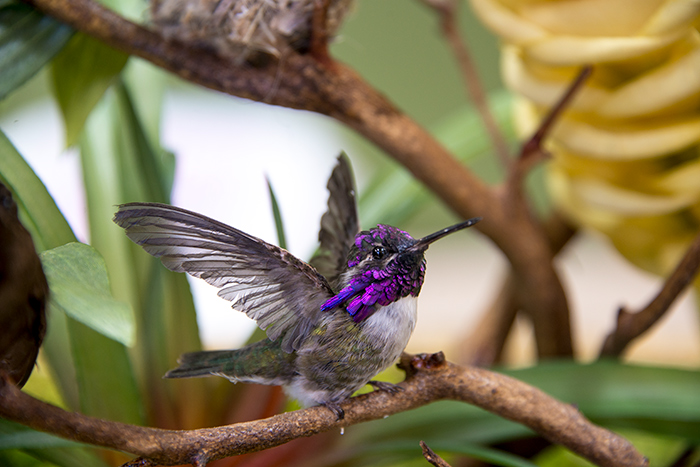 Q: Are the specimens you used old or new? McCormack: The Moore Lab was founded by Robert T. Moore, who, like Gould, had a passion for hummingbirds. He collected more than 40,000 bird specimens from the 1920s to the 1950s and purchased some from other collectors. We chose the best-preserved and most spectacular specimens from Moore’s collection, combined with some new birds that sadly collided with windows and were found dead. 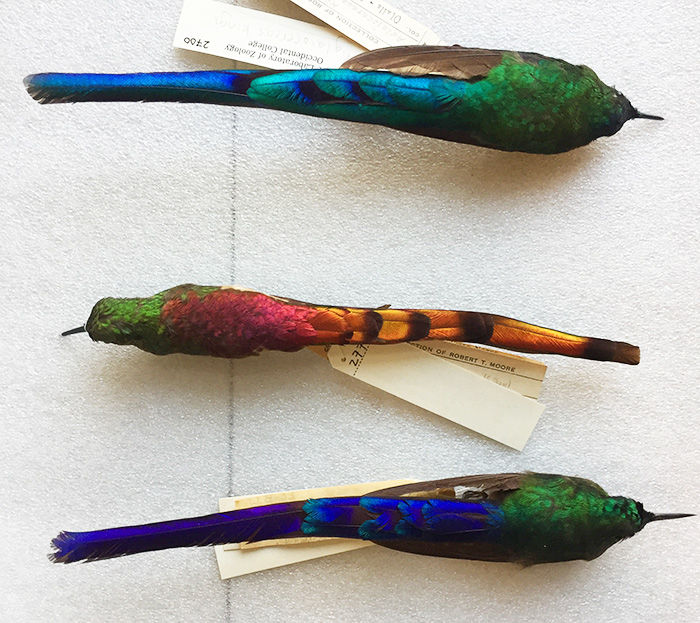 Q: Are these direct replicas of the original cases or inspired by them? Markham: I tried to replicate the cases as closely as I could, down to having a wood carver carve the bases and even learning to weld to make the frames. McCormack: One difference is the addition of LED lights to help light up the iridescent throat patches of the hummingbirds, which reflect only from certain angles. Q: Do you think it was easier or harder to make these cases today than it was in John Gould’s time? Markham: I think my job was much easier than Gould’s. I could reference his original cases, and I had the aid of such modern technology as freezers to better preserve the material. I also had tools to help hold and work on the tiny birds. Having said that, it wasn’t an easy project. One thing I didn’t expect was that, after several days of working on hummingbirds, my hand started to cramp up. I can’t even imagine making 24 cases as Gould did. 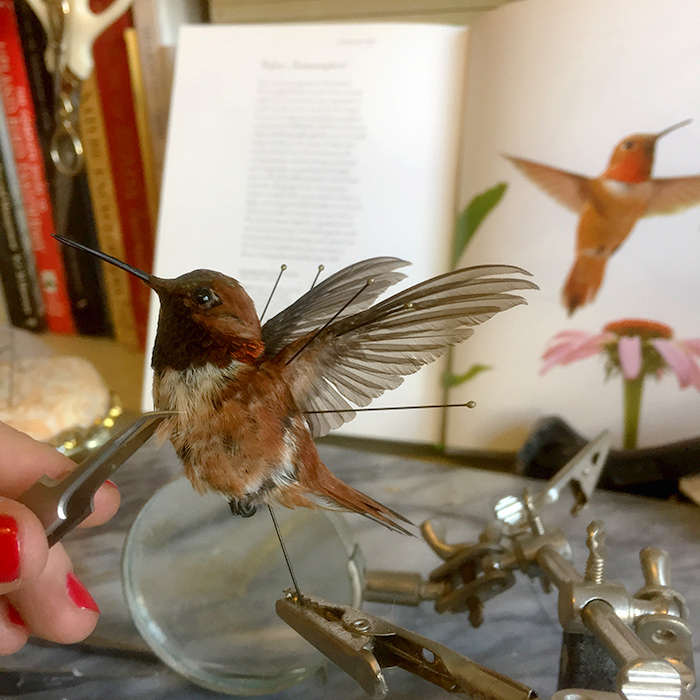 Using clamps and other tools, Markham positions an adult male rufous hummingbird (Selasphorus rufus) to show the bird in flight. The specimen was donated by the Museum of Southwestern Biology at the University of New Mexico. Photo by Allis Markham.

Q: Some people may recoil from the sight of so many dead birds. Is there a larger environmental message? McCormack: Seeing so many specimens in one place at one time can be shocking. But it’s important to remember that Moore’s collecting activities were carried out over 50 years, so only a few individuals were ever collected from one place at one time. All the species in these cases— and, in fact, all the species in Gould’s cases—are still around today. Not one has gone extinct. The modern exemplars are what we call “salvage specimens,” or individuals found dead and donated to museums for study. Also, it’s important to recognize the contributions of specimen collections to our scientific knowledge. Almost everything we know about species—their names, where they are found, how they differ from one another and how they are related—ultimately traces back to knowledge gained from museum specimens. All this information is important to species protection. If you can’t put a name on something or know where it lives, you can’t effectively preserve it. 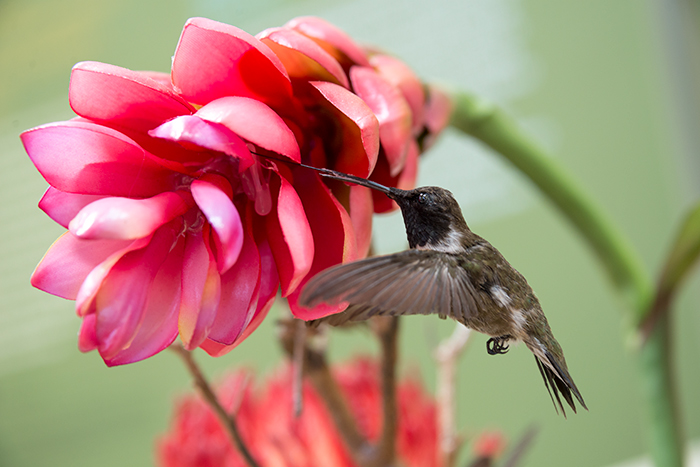 Q: Thousands of people lined up to see Gould’s Hummingbird House back in 1851, but at the time, few Europeans had seen live hummingbirds, which are native to the Americas. Do you think today’s visitors will feel the same attraction? McCormack: Absolutely. Although we have amazing cameras and high-definition screens that can take us up close to hummingbirds, slow down their wing beats, and so forth, there is still something breathtaking about getting a chance to take a close look. In nature, and even on our screens, we catch only fleeting glimpses of hummingbirds. In these displays, you can admire their intricate details for as long as you’d like. 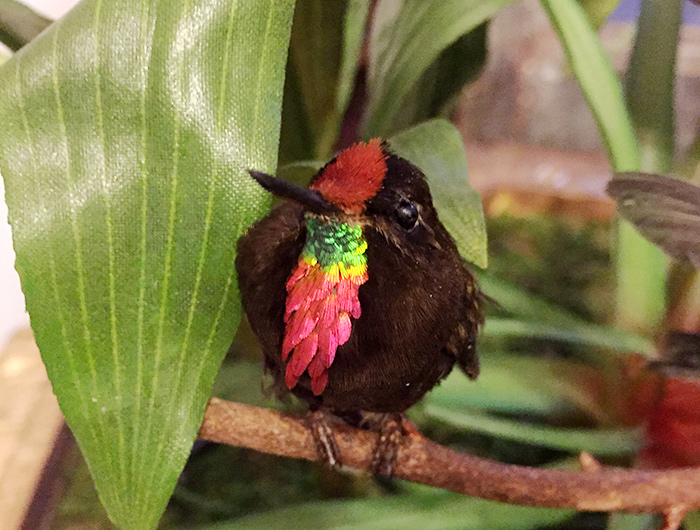 The iridescence of hummingbird feathers comes from microscopic structures that reflect light. The colors on the throat of this rainbow-bearded thornbill (Chalcostigma herrani) are as stunning today as they were when the specimen was collected in Ecuador in 1892. Photo by Allis Markham.