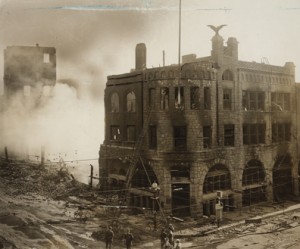 You might have caught Larry Harnisch's series of posts on his latimes.com blog The Daily Mirror about the 1910 bombing of the Los Angeles Times building. Larry did quite a bit of his research here at The Huntington, sifting through box upon box of the Los Angeles Times company records. This collection is one of our "hidden collections," but it has received a lot of use since it arrived in 2005 and will likely receive even more once it becomes "open."

For a "hidden collection," the Los Angeles Times company records has been used by an astonishing number of researchers. One of the first to mine it was Peter Jones Productions while producing the documentary Inventing L.A.: The Chandlers and their Times. Peter Jones, Brian Tessier, and a handful of others spent weeks going through the textual, audio, and visual materials in the collection. This included spending a few days in the stacks, projecting reels of film onto the blank walls of the Munger Research Center, and a few trips by the curator to post-production houses, so the films could be transferred to a HD digital format. The end result—both the film and the companion book by Bill Boyarsky—showed the depth and breadth of the Los Angeles Times company records. 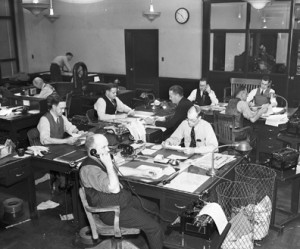 Because the collection is "hidden," it is not in the catalog and has no finding aid. Researchers must come to me with any queries. By far the most popular subject from these researchers is the Los Angeles Times and labor unions. Though there doesn't seem to be any "smoking gun" letters from Harrison Gray Otis or Harry Chandler regarding the Times' "open shop" policy, there is a wealth of material and photographs related to the Oct. 1, 1910, bombing of the Los Angeles Times building by two union supporters. The photographs taken during the post-bombing recovery and clean-up efforts are jarring—the bomb killed 21 Los Angeles Times employees and effectively destroyed the stone building. The subsequent trials for the bombing and jury-tampering by the attorney Clarence Darrow are also documented with photographs, transcripts, and newspaper clippings.

Howard Blum's book American Lightning went into great detail about the bombing and the personalities that were involved in the effort to identify the bombers and bring them to trial. Blum used images from the Los Angeles Times company records to illustrate his story. In his blog posts, Harnisch brought to light some of the lesser-known stories surrounding the bombing. He also did a great job of expressing the highs and lows of research—some days are truly spent reading faded page after faded page of dull trial transcripts.

The Los Angeles Times company records are nearly processed, and a finding aid should be available on the Online Archive of California by January. The collection is quite large (more than 500 boxes of textual material and more than 100 boxes of photographs, film, and audio tapes), but I know it will provide researchers with a fount of information in the decades to come.

Photos: Top: The smoldering ruins of the Times building, morning of Oct. 1, 1910, after bombing by union organizers. Bottom: Reporters in the newsroom, Aug. 7, 1941.

Jennifer Allan Goldman is curator of manuscripts and the institutional archivist at The Huntington.