Graffiti in the Ellesmere Chaucer 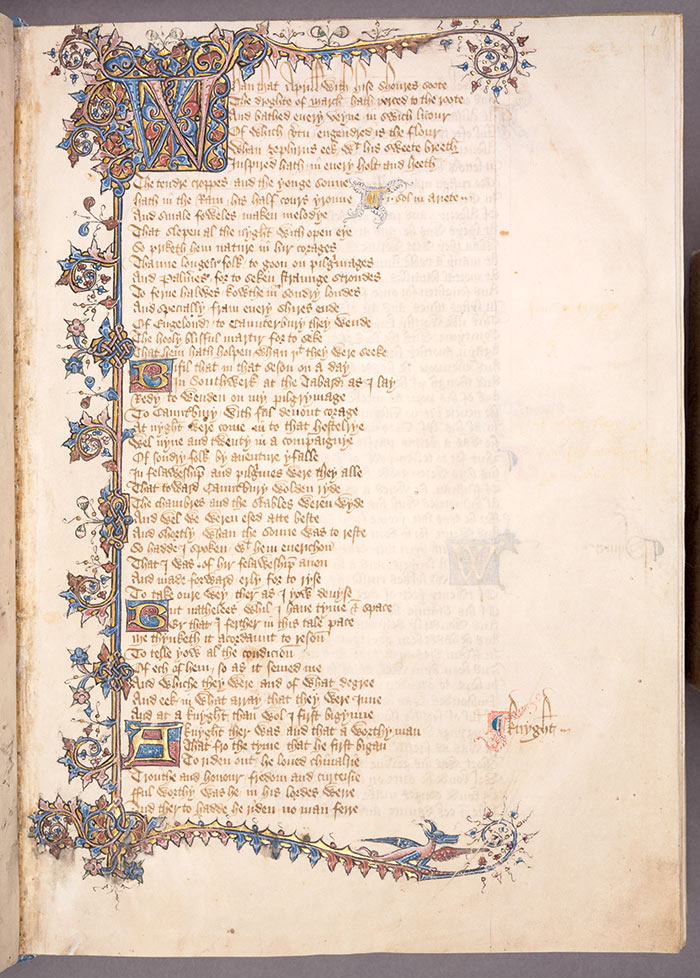 The first page of the General Prologue in the Ellesmere Chaucer, ca. 1400 to 1410, a beautiful and elaborately decorated manuscript of Geoffrey Chaucer’s Canterbury Tales. The Huntington Library, Art Collections, and Botanical Gardens.

In April 1917, the Cambria set sail from London for New York. Most of the passengers had no idea that one of the world’s great libraries sat below decks in 101 wooden crates. Shakespeare folios and quartos were packed in with some 8,000 early printed books. Also in the crates were 13,000 manuscripts, touching upon domestic management, family relations, religion, politics, law, literature, and diplomacy from the medieval period through the 18th century. These items made up the iconic Bridgewater Library that Henry E. Huntington had purchased from John Francis Granville Scroop Egerton, 4th Earl of Ellesmere, through the bookseller George D. Smith and Sotheby’s. Slowly the collection made its way to the United States. Nestled among these treasures was one manuscript that has long outshone all the others in fame and significance: the Ellesmere Chaucer. This manuscript of Geoffrey Chaucer’s Canterbury Tales, written on parchment and decorated with awe-inspiring illuminations, was still in the process of being created when Chaucer died in 1400. If you’ve ever purchased a copy of “the Tales” at a bookstore or had a zealous high school English teacher make you memorize the General Prologue, then you’ve read the Ellesmere Chaucer. Most printed versions are based on this manuscript. 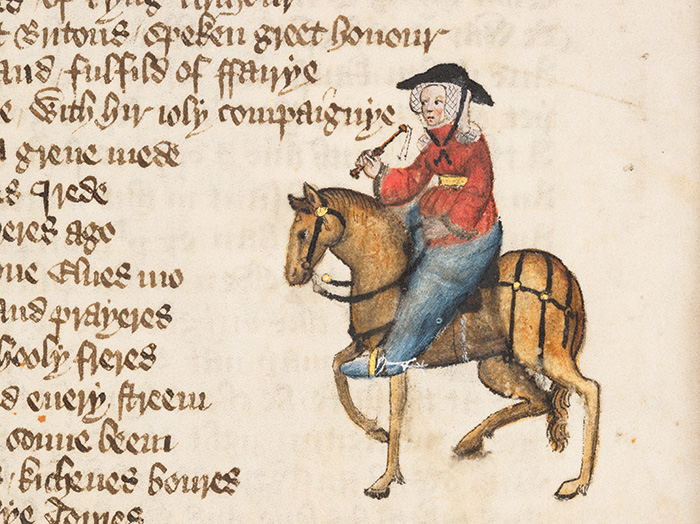 A miniature illustration of the Wife of Bath at the beginning of her tale in the Ellesmere Chaucer, ca. 1400 to 1410. The Huntington Library, Art Collections, and Botanical Gardens.

The manuscript is among the most iconic and celebrated books in the world.  Its miniatures are recognizable on book-lover’s tchotchkes, and readers love to smirk at the bawdy “Tale of the Wife of Bath.” The Ellesmere Chaucer is more than just a book; it is a literary masterpiece and a work of art.  But sometimes it is too easy to be blinded by the glittering illuminations. We miss some of the other stories this manuscript tells us, stories beyond the Tales. The front and back flyleaves (the blank pages at the beginnings and ends of books) tell us about the people who owned and used the manuscript before it left England. “Robertus Drury,” “Edwarde Waldegrave,” and “Thomas Calthorpp” are just some of the names that appear alongside lines of verse in Latin and English. The graffiti in the front matter of this glorious volume includes pen trials, writing exercises, and other scribbings and doodlings. 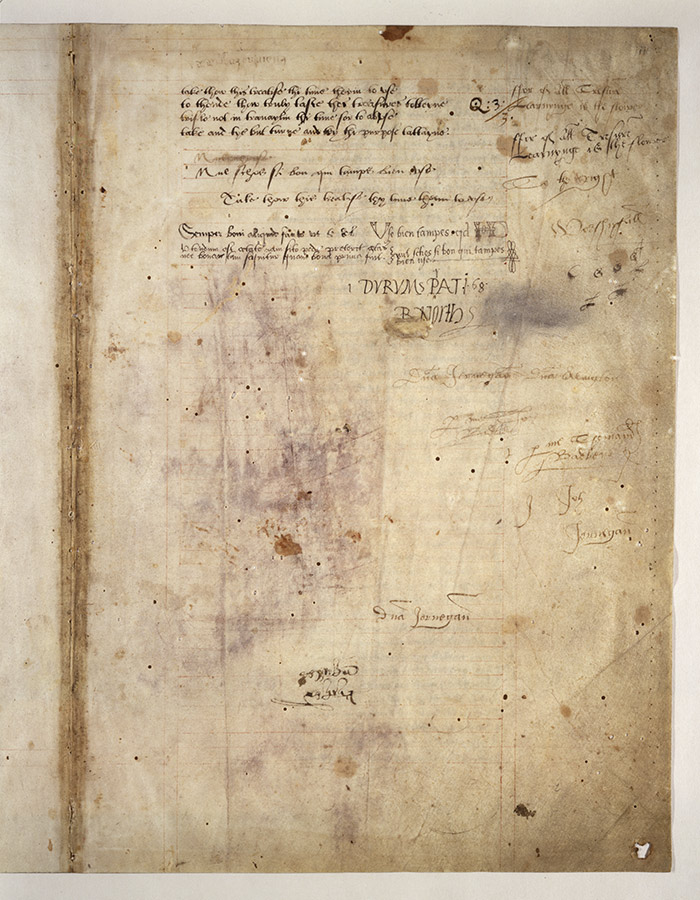 The flyleaves of the Ellesmere Chaucer tell us about the people who owned and used the manuscript before it left England. The graffiti on this page includes pen trials, writing exercises, and other scribbings. The Huntington Library, Art Collections, and Botanical Gardens.

One name jumps out from the pages: Margery. Her name appears in a youthful 16th-century script several times across the volume’s front flyleaves. There is a clue suggesting that young Margery did not write her name herself: in the center of one flyleaf, someone has put quill to parchment in anger and written in the same hand: “Margery seynt John ys a shrew”!  Poor Margery, forever accused of being a shrew in the pages of the iconic Ellesmere Chaucer! Was the outburst prompted by a feud between siblings? Or was it perhaps the result of unrequited young love? That remains a mystery. We do know that Edward Waldegrave had at least two cousins named Margery St. John, so she was associated with one of the early families who owned the manuscript. 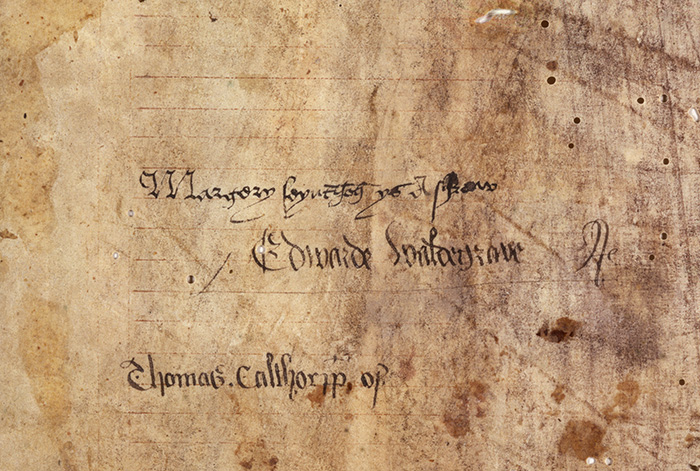 In the center of one flyleaf, someone has put quill to parchment and written: “Margery seynt John ys a shrew” (“Margery St. John is a shrew”). The Huntington Library, Art Collections, and Botanical Gardens.

For the first time, the manuscript is open to these graffiti-filled flyleaves in the Library’s permanent exhibition, “Remarkable Works, Remarkable Times.” (The flyleaves will remain on view through mid-February 2018.) While some may miss the shining miniatures and elaborate borders of the decorated text, it is important to give these grittier pages their place at center stage. And our dear Margery St. John surely deserves some restitution for being eternally dubbed a shrew. This remarkable manuscript contains one of the most significant works of English literature and also provides us with a window into the lives of the many families who owned it. Exhibiting the flyleaves brings out the humanity of this treasure. Vanessa Wilkie is William A. Moffett Curator of Medieval Manuscripts and British History at The Huntington.