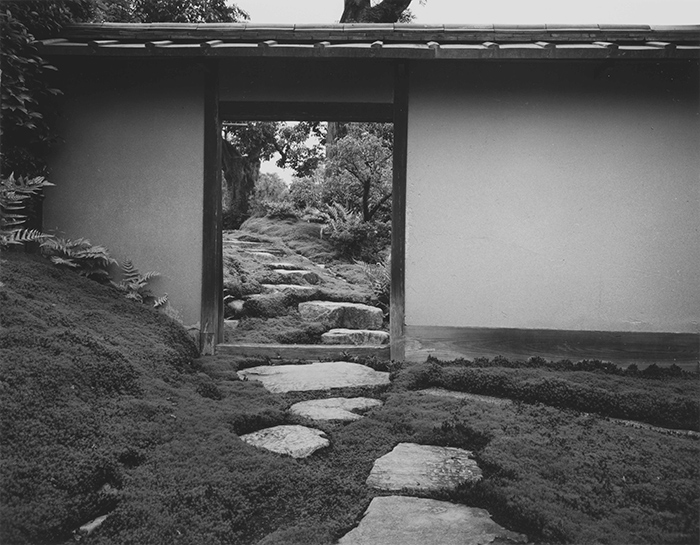 What does the 20th-century Arts and Crafts architecture of Americans Charles and Henry Greene have to do with the 17th-century Katsura Imperial Villa outside of Kyoto, Japan? For admirers of the work of Japanese-American photographer Yasuhiro Ishimoto (1921–2012), it turns out, quite a bit.

With the opening of the exhibition “Yasuhiro Ishimoto: Bilingual Photography and the Architecture of Greene & Greene,” visitors will be able to see how the photographer captured similar elements in both. The exhibition features 40 sumptuous black-and-white photographs of houses designed by Greene & Greene and another six of Katsura, an imperial palace considered one of the greatest achievements of Japanese architecture.

Ishimoto was born in San Francisco in 1921, lived in his parents’ native Japan as a child, and then returned to the United States in 1938. He ultimately became a naturalized citizen of Japan, where he enjoyed a successful career as an architectural photographer. 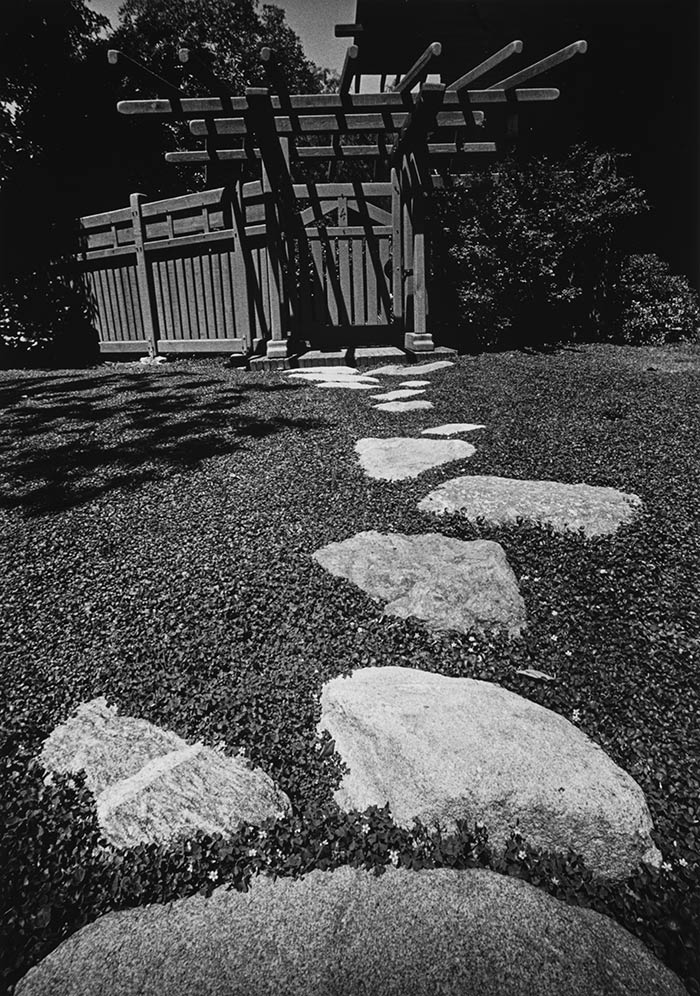 In 1954, Ishimoto shot hundreds of images of Katsura Imperial Villa, founded by Prince Hachijō Toshihito in the 17th century. As his images reveal, Ishimoto was captivated by the spare post-and-beam structure of the buildings and their thoughtful integration with the landscape. He also explored the juxtaposition of textures and materials—training his lens on a row of stepping-stones or carefully framing details of the villa’s exterior to highlight pattern versus structure.

And 20 years later, he would elevate these same themes when he photographed the work of Charles and Henry Greene for the Japanese design magazine Approach. He took nearly 1,000 photographs of 12 houses designed by the Greene brothers. Most of them were of the Gamble House, a building the Greenes constructed in 1908 for David B. Gamble of the Procter and Gamble Co. Ishimoto snapped more than 600 photographs of the Gamble House alone—more than he had taken of Katsura.

Comparing the two sets of photos makes clear the influence of Japanese architecture on the design aesthetic of the Greene brothers. One can also see how, in both cases, Ishimoto’s photographs honor the intentions of the original craftsmen. 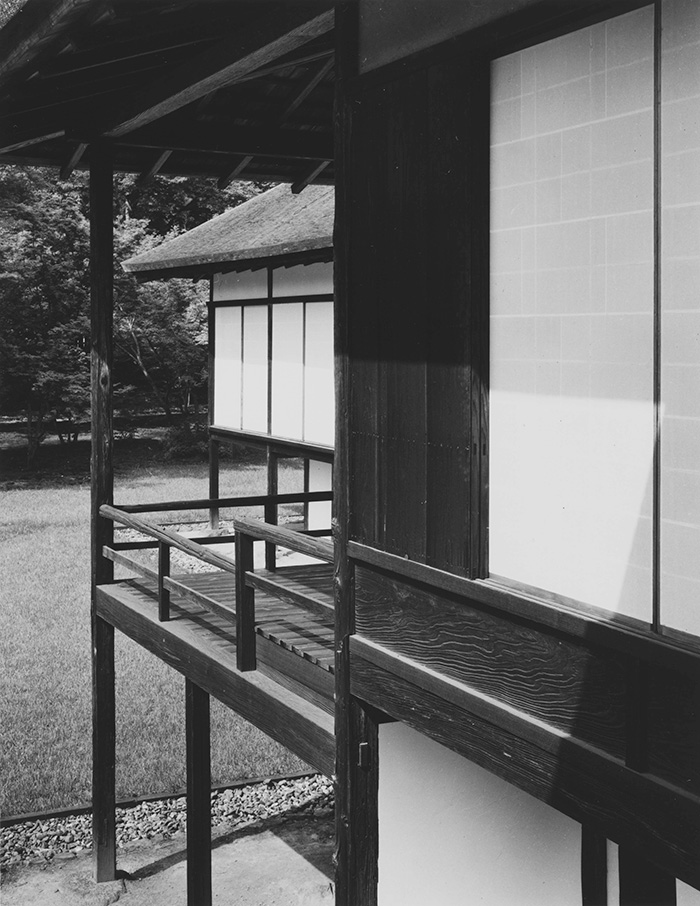 “Ishimoto’s images don’t set the works of architecture apart from the viewer, nor do they put them on a pedestal,” says Anne E. Mallek, former curator of the Gamble House, who curated the photography exhibition along with Edward R. “Ted” Bosley, the current Gamble House director. “One is pulled in,” she says, “as if to observe the details that only the architects and craftsmen may have cared about.”

In the postwar period in both the United States and Japan, architects were examining the past as a resource for a national style. Ishimoto’s photos became key illustrations for a new approach to architecture in Japan in the 1950s and 60s. Likewise, the Greene brothers forged a new American style, going on to receive a special citation from the American Institute of Architects for a “new and native architecture.”

Down the hall from the Ishimoto exhibition is a refreshed installation of The Huntington’s permanent display of Greene & Greene architecture and design. Some of their finest examples of hand-crafted furniture are on view, reinstalled to provide greater context. There are also several new pieces on display that were brought out of dimly lit corners of the Gamble House so that they could be given the visual prominence they deserve. The showstopper is a 1909 chiffonier made from walnut, oak, and ebony, and inlaid with lapis lazuli, turquoise, and malachite.

Thanks to a recent reconfiguration of the Virginia Steele Scott Galleries of American Art, these two exhibitions now sit at opposite ends of a single, long hallway. The works by Ishimoto look out toward those of the Greene brothers and vice versa, as if acknowledging how two very different cultures continue to inform each other, illustrated through the lenses of architecture, design, and photography. 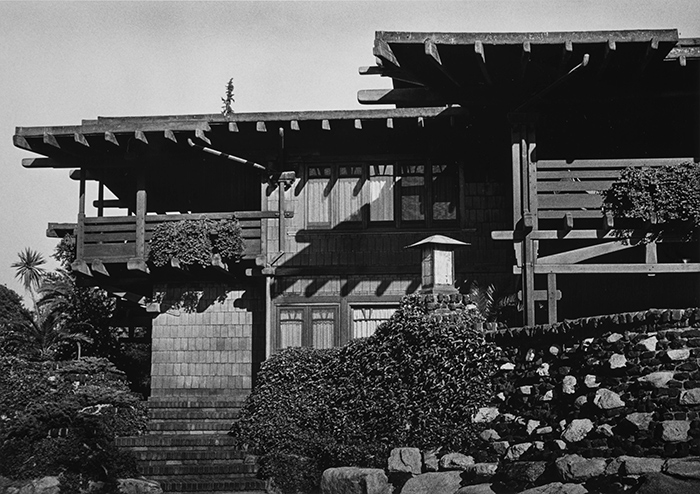 “Yasuhiro Ishimoto: Bilingual Photography and the Architecture of Greene & Greene” is on view June 18–Oct. 3, 2016, in the Susan and Stephen Chandler Wing of the Virginia Steele Scott Galleries of American Art. Reopening at the same time is The Huntington’s permanent display of Greene & Greene architecture and design, organized in collaboration with the Gamble House/USC.